The teenager became the second youngest player to represent the Spanish champions in La Liga, against Real Betis, and is destined for the very top

At the age of 16 years, 11 months and five days, Ansu Fati strode out onto the turf at Camp Nou on Sunday to make his Barcelona debut.

Only one player – Vicenc Martinez Alama, in 1941 – has pulled on the famous Blaugrana shirt at a younger age in a Liga match. A star, many in Catalunya believe, is about to be born.

Seen by many as the most talented player currently within Barca's famed La Masia academy, Fati has been earmarked for success from an early age.

And at a time when the likes of Sergio Gomez and Xavi Simons have made headlines for turning their backs on the Spanish champions due to a perceived lack of opportunities at first-team level, Fati's emergence offers reassurance to supporters that those whose skills have been honed at La Masia can still break into the senior squad.

This, though, would have seemed like another world to Fati as he spent his early years in his native Guinea-Bissau kicking around rolled up socks which he used as improvised balls. Brought up by his mother, Maria, he did not meet his father, Bori, until he was a six-year-old.

Bori left his homeland in 2001 in a bid to begin building a life for himself and, latterly, his family in southern Spain. He worked a series of jobs before becoming a driver for Juan Manuel Sanchez Gordillo, the mayor of Marinaleda in Seville.

Gordillo was able to help Bori bring his wife and children across from Africa, allowing Ansu to meet his dad and show off his footballing skills for the very first time.

"I knew he liked football like any African kid, but not that he was so good!" Bori told Spanish radio station COPE following his son's debut against Real Betis.

Ansu's ability quickly caught the attention of his new neighbours, and he was enrolled into the Peloteros School, who housed a training team at their base in Herrera, a small town located around an hour from central Seville.

It was not long until professional clubs were taking an interest in Fati and, in 2010, his parents received a call from Pablo Blanco, the head of Sevilla's academy, who invited both Ansu and his older brother, Braima, to join the club.

Coached to play as a central striker, it took just weeks for Spain's biggest clubs to learn of Fati's gifts, with even Real Madrid and Barca declaring an interest in a player who did not turn 10 for another two years.

Fati's parents visited the academy headquarters at both Madrid and Barcelona to gauge which would be more suited to their sons' upbringing, just as Andres Iniesta's family had done 20 years previously. Coincidentally, both made the same decision for exactly the same reason.

"Real Madrid offered us much more money but when I went to Valdebebas [Madrid's training base], I saw that they had no residence for the kids. Although they would have put us in a house, we chose Barcelona because they did have residence for the boys," Bori revealed.

Sevilla's sporting director, Monchi, also offered more capital than what was on offer at Barcelona to try and keep Fati in Andalucia, but the decision had been made.

Unfortunately, Fati was forced to sit out a year in 2011 as Sevilla refused to pick him for matches anymore but, by 2012, he was a fully-fledged member of La Masia. 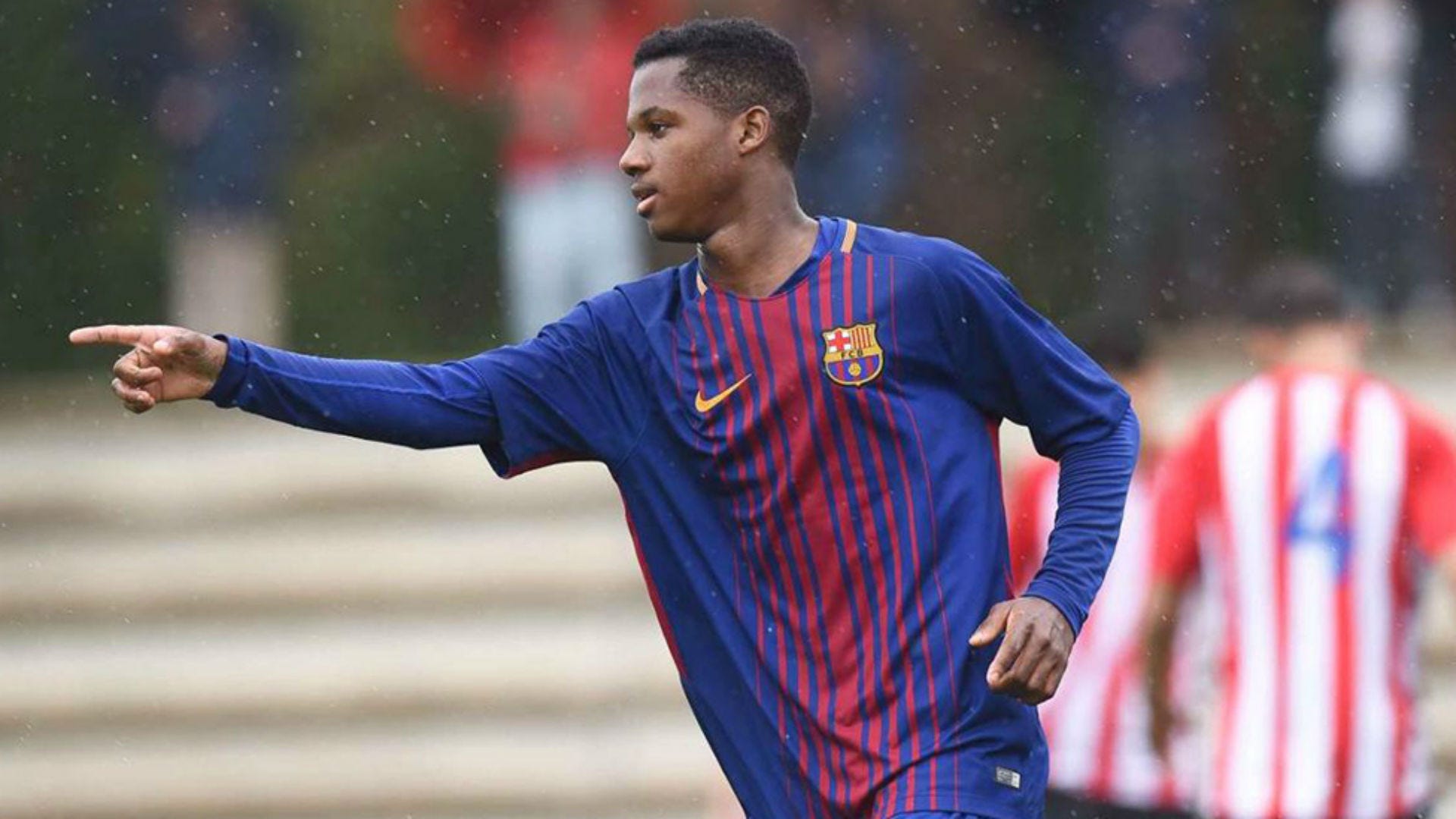 Thrust straight into the Alevin A side, or Under-12s, he quickly became one of the team's star players despite playing below his actual age group. He struck up a deadly strike partnership with Takefusa Kubo, and between them they scored 130 goals during their first season playing together.

In 2014, however, Barcelona were punished by FIFA with a transfer ban that saw Kubo join a host of other foreign imports in leaving the club's academy as they could no longer be registered.

Kubo – once dubbed the 'Japanese Messi' – has now returned to Spain, having joined Real Madrid during the summer, and could even come up against Fati this season after being loaned to newly-promoted Real Mallorca for the 2019-20 campaign.

Fati was able to remain at Barca during the cull of some of their best young talent, but did not make another appearance until 2015, when he could finally be registered again. His return to action was short-lived, however, as he suffered a broken tibia and fibula in a derby match against Espanyol that kept him out for a further 10 months.

Upon his recovery, he joined the club's Juvenil B side, and yet again he proved to be far above the level of both his opponents and his own team-mates.

It was around this time that coach and former Barcelona attacking midfielder Jose Mari Bakero proposed that Fati shift away from the central striker role that he had been brought up playing in and instead concentrate on becoming a left winger so as to be able to work on his dribbling. It is a position that he has made his own with Barca's Juvenil A side over the past 12 months, finishing as the league's top scorer last season.

That form saw Fati begin to demand more. He wanted to be playing reserve-team football, knowing that it is rare for players to earn a place in the first team unless they have first played for Barcelona B.

Given he could not sign professional terms until the age of 17, there was the option of leaving for another club, who would merely have to pay a cut-price fee in compensation. 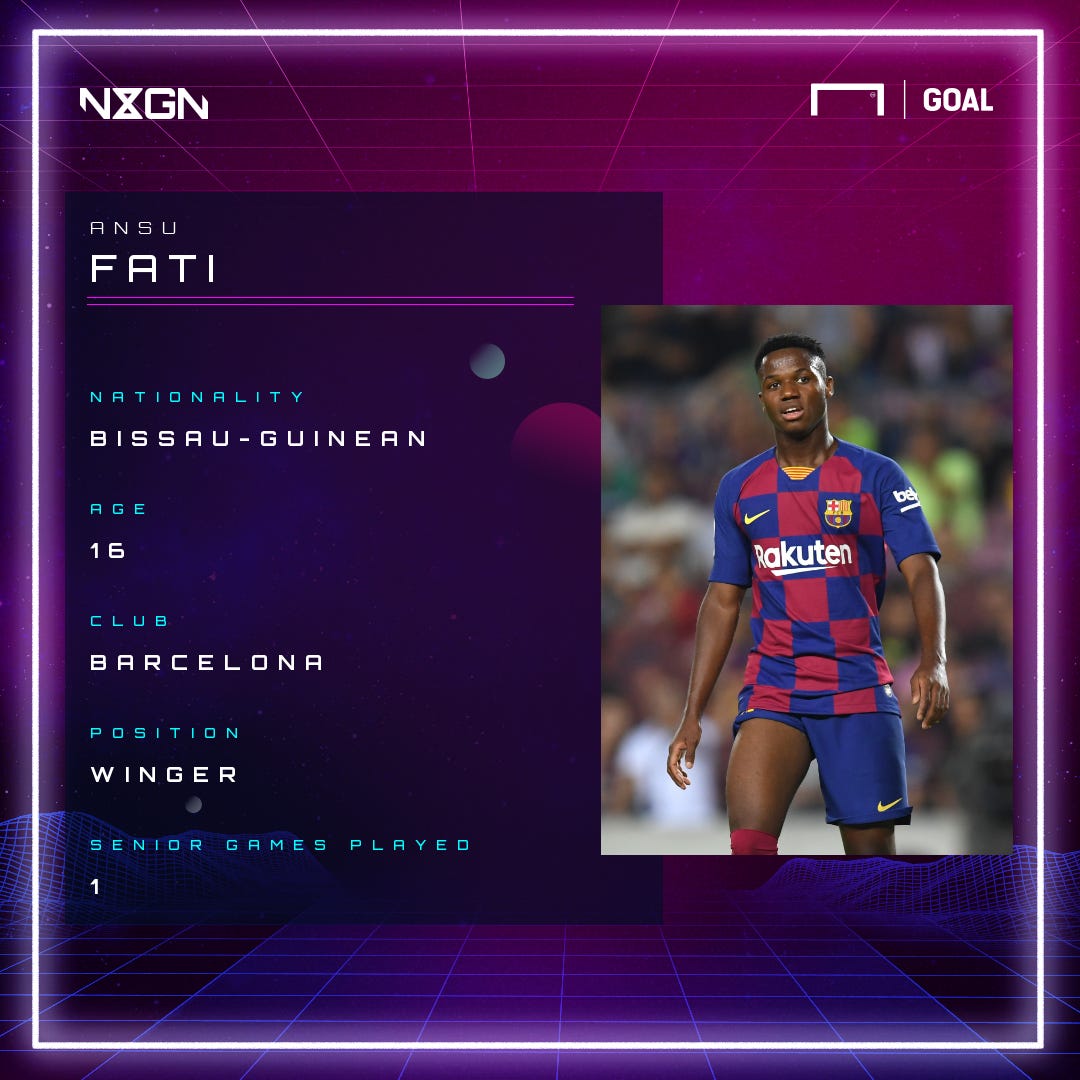 With the highly rated Simons having already left for Paris Saint-Germain, Barca were not about to let another of their academy jewels go, as reports of interest from Manchester United and Borussia Dortmund began to surface.

They eventually agreed to a renewal of his current contract, which formally keeps him at the club until 2022 with a release clause of €100 million (£90.5m/$122.5m). It is expected that, given his rise to prominence and his upcoming 17th birthday, negotiations regarding a further renewal of terms are not far away.

Nevertheless, it turns out Fati had need not have worried about his first-team chances, as he debuted in Ernesto Valverde's side before he had even made his reserve-team bow.

"He has a lot of self-confidence, goes to space, faces one-on-one," Valverde said post-match. "He is the youngest player I've ever handed a debut, but as with veterans, we look at performance, he can give us good performances and that's why I gave him his debut."

That reaction, though, was not the one that had gone viral by the time Monday morning came around.

A picture of him being embraced by Lionel Messi inside the Camp Nou home dressing room was posted on Instagram by the Argentine after full-time.

Messi, who had watched Fati's debut from the stands as he continues his recovery from a calf injury suffered in his first training session of pre-season, certainly seemed to be impressed by what he saw, with his actions harking back to his early days with the first team.

A precocious teenager himself, Messi was taken under the wing of Ronaldinho, with the Brazil international then the unrivalled star turn and talisman for the Blaugrana.

His relationship with Messi was seen, in retrospect, as a passing of the baton of responsibility to lead the side going forward; something Messi has done for over a decade now.

Whether this moment will be seen as Messi finally finding a successor in the shape of Fati, only time will tell, but needless to say this is only the start of the 16-year-old's story at Barcelona.

He has a lot of chapters still left to write.