Antonio Conte knows himself that diplomacy has never been his forte.

There were six people booked in Friday night's Europa League final in Cologne; the Inter coach was one of them.

Having already been enraged by Diego Carlos avoiding a straight red card for taking down Romelu Lukaku when the Belgian was clean through on goal, Conte lost it when no penalty was given after the ball had struck the Brazilian defender on the arm.

Then, while making his unhappiness known to referee Danny Makkelie, he got into a verbal argument with Ever Banega, who had mocked the Italian's hair. That was never going to sit well with Conte, of course.

As Andrea Pirlo once said of his former boss at Juventus, "Antonio had a devil for every hair, and if the hair was fake, the devil was 100 per cent real."

He always has many gripes, then, and Banega was the least of the concerns on Friday night.

Indeed, when asked about the altercation with the Argentine in his post-match press conference Conte replied, "I was a footballer. And for me what happens on the pitch, remains on the pitch."

And that was a telling statement.

Conte is old-school when it comes to disputes; he is very much of the opinion that players, coaches and clubs shouldn't air the dirty linen in public.

One could, therefore, legitimately ask why he has been so regularly willing to speak to the press about issues with his employers.

Indeed, immediately after the game, he appeared on Sky Sport Italia and admitted that he might not continue as Inter coach. 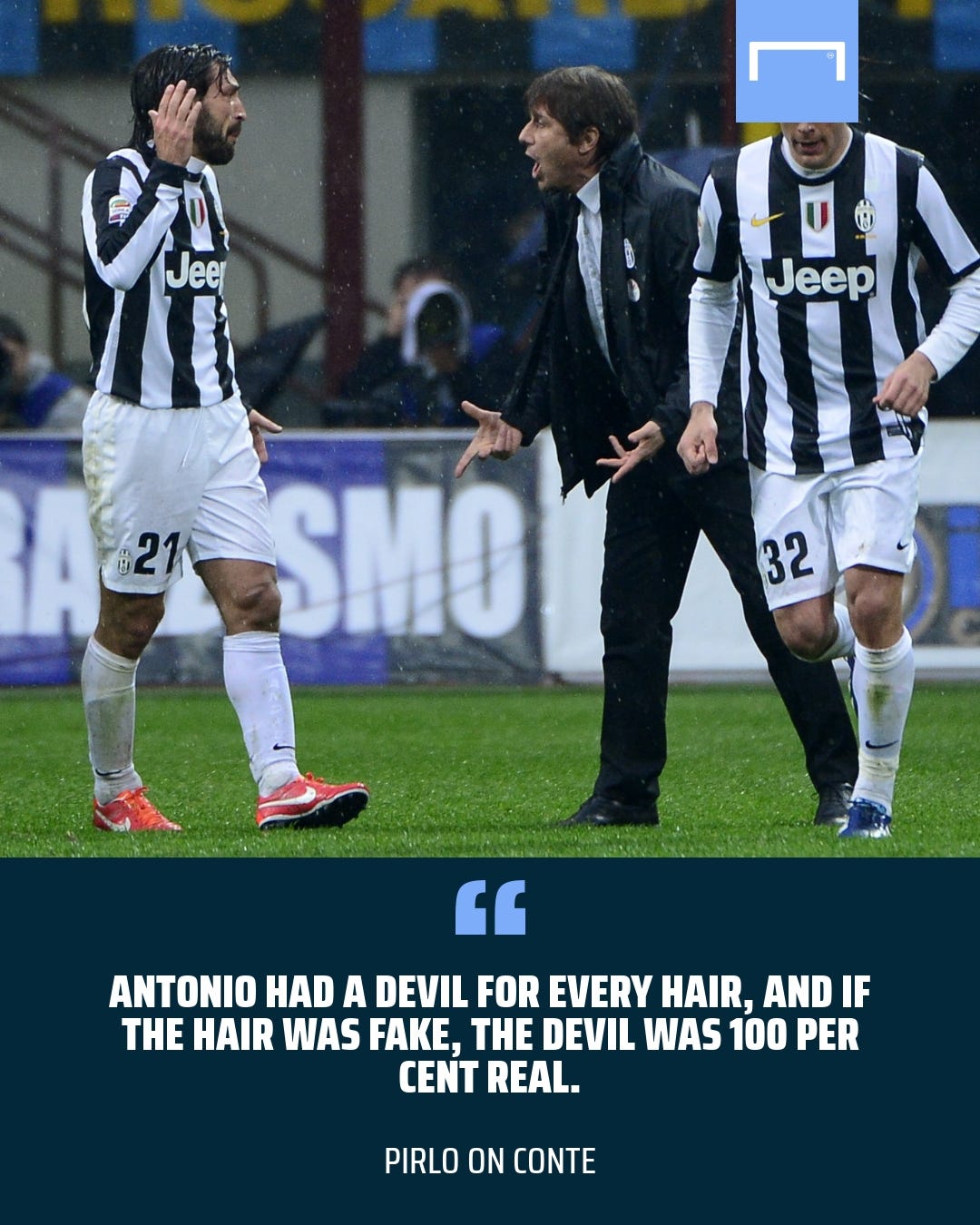 He may have led the Nerazzurri to both their best Serie A points haul and first European final since 2010 in his debut season at San Siro, but his refusal to commit his future to the club was wholly unsurprising – and not just because he fell out with his bosses in his previous two club jobs, at Juve and Chelsea.

Just three weeks ago, after a 2-0 win at Atalanta, Conte launched into a remarkable tirade, arguing that he and his players had not been adequately protected by those above them.

Beppe Marotta, the man who hired Conte for both Juve and Inter, subsequently claimed that the coach's outburst had been quickly forgotten about but even a victory over Sevilla wouldn't have completely calmed the tension at the club.

Conte has not been 100 per cent happy all season long. Right from the start, he was enraged by alleged leaks from within the club.

It has long been rumoured that somebody at Inter is feeding the newspapers information about what's going on in the dressing room and the board room, particularly in relation to transfer targets.

However, Conte was particularly upset by a story published in the Corriere dello Sport last November in which it was claimed a letter had been sent to his family home containing threats and a single bullet.

Inter quickly clarified that it was the club who received the letter, and explained that they had alerted the relevant authorities.

By that stage, though, Conte's wife, Elisabetta Muscarello, had got involved, writing on Facebook, "The story about a bullet is a lie! In Italy we’re really in a bad way in terms of communication.

"It’s as if people just get up in the morning, invent something and write it! Without ever thinking about the consequences."

This sorry episode, then, would go some way towards explaining Conte's repeated references to his family and his private life while discussing his Inter future after the Sevilla loss. It's clear that he feels let down by the club in relation to the incessant leaks. 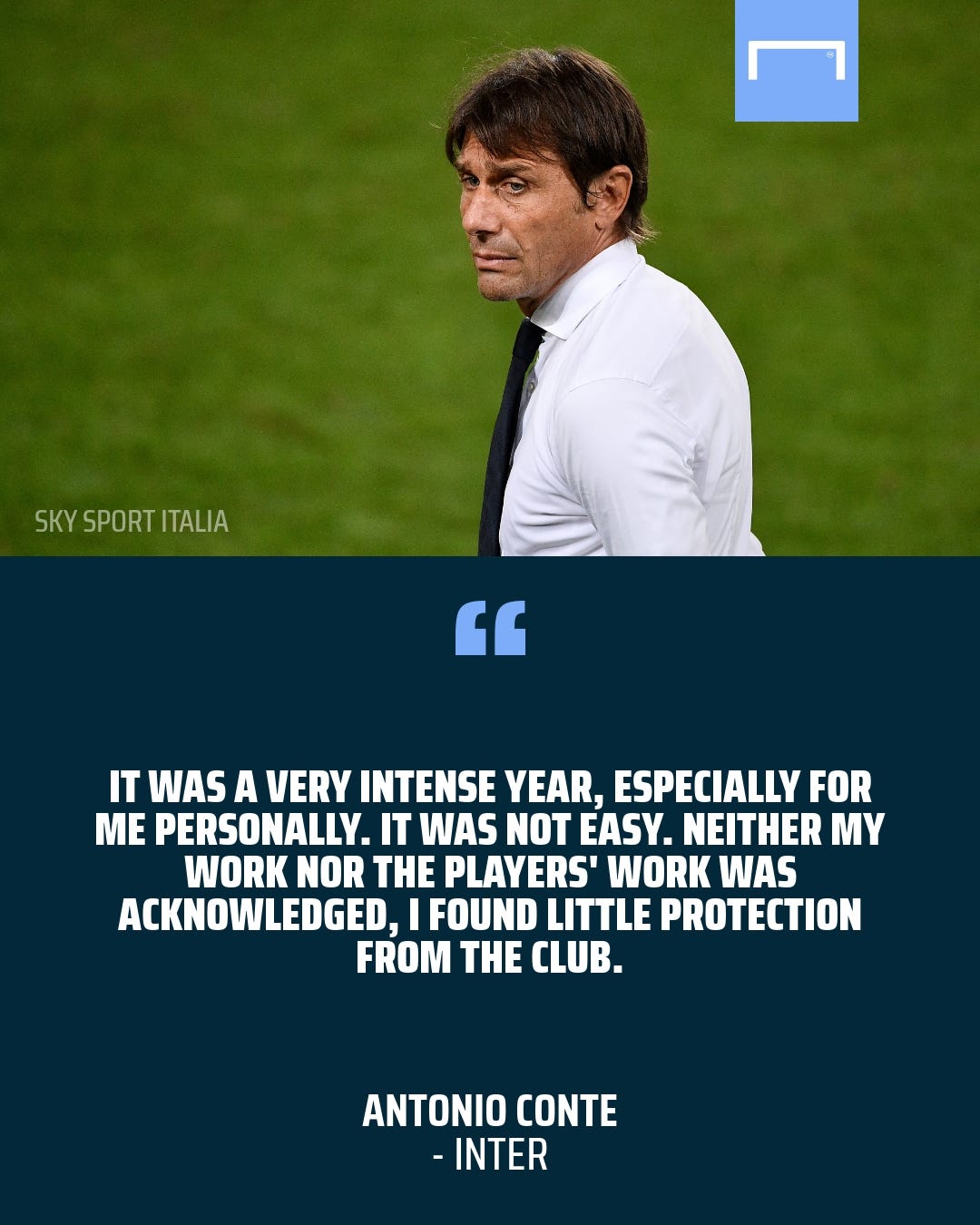 During the Bergamo outburst, he also insisted that his disillusionment had nothing to do with the transfer market but we do know he hasn't been entirely pleased with Inter's recruitment.

After the team's loss to Borussia Dortmund at Signal Iduna Park in November, he effectively blamed the second-half collapse on "mistakes made at the planning stage" of the season by the club's directors, saying he was "really p*ssed off".

He was also bitterly frustrated by the arrival of Christian Eriksen during the January transfer window, given he had requested Arturo Vidal – a midfielder with completely different skills and characteristics to the Dane, who is unsuited to the coach's preferred 3-5-2 formation.

So, it's fair to say that there will be more than one item on the agenda on Tuesday when Conte sits down with Inter president Steven Zhang, CEO Marotta and sporting director Pier Ausilio and the rest of the key directors next week to defuse the tension at the club.

It's certainly in both parties' interest to mend their strained relationship. Inter won't want to have to hand over a severance package, while Conte won't want to walk away from the excellent foundations he has put in place at San Siro.

He is building something special at Inter, a side capable of ending Juve's Serie A supremacy. When he arrived, the Nerazzurri had just finished 21 points behind the Bianconeri; last season, the deficit had been reduced to one.

In addition, he has improved youngsters such as Nicolo Barella and Alessandro Bastoni, and revived the likes of Danilo D'Ambrosio, Alexis Sanchez and Romelu Lukaku.

Consequently, Conte will be keen to finish what he has started, so will doubtless make several demands, not least an end to the leaks.

Inter, meanwhile, would be perfectly entitled to take just as firm a stance by making it clear that continued public attacks on the club would be simply unacceptable.

It has the makings of a heated discussion, no doubt. It will require "cool heads", as Conte said himself on Friday night.

But then again, as he's always been the first to admit: diplomacy has never been his forte.