1. Diego Armando Maradona was born on October 30, 1960 in the outskirts of Buenos Aires.

3. He played in four World Cup tournaments for his country.

4. He helped Boca Juniors to the league championship in 1982 before making a move to Barcelona. But in 1984, he transferred to Napoli and helped them win their only two Serie A titles to date – in 1987 and 1990.

5. Maradona holcx the record for making the most number of appearances as captain of any country in a World Cup. He skippered Argentina on 16 occasions.

6. In total, he made 21 appearances in World Cup tournaments.

7. A 15-year-old Maradona made his professional debut on October 20, 1976 for Argentinos Juniors.

8. Maradona was part of the Argentina youth squad that won the 1979 Youth World Cup in Japan.

9. On February 27, 1977, Maradona made his international debut against Hungary at age 16 at the Bombonera stadium in Buenos Aires.

10. He had a tattoo of Che Guevara on his arm, and a portrait of Fidel Castro tattooed on his left leg.

11. Maradona holds the record for suffering the most number of fouls in a World Cup – 53, during the 1986 World Cup in Mexico.

12. He also holds the record for the most number of fouls suffered in one game in a World Cup, when Italy fouled him 23 times in the 1982 edition of the tournament.

14. Diego also won the Golden Ball for being the tournament's outstanding player. 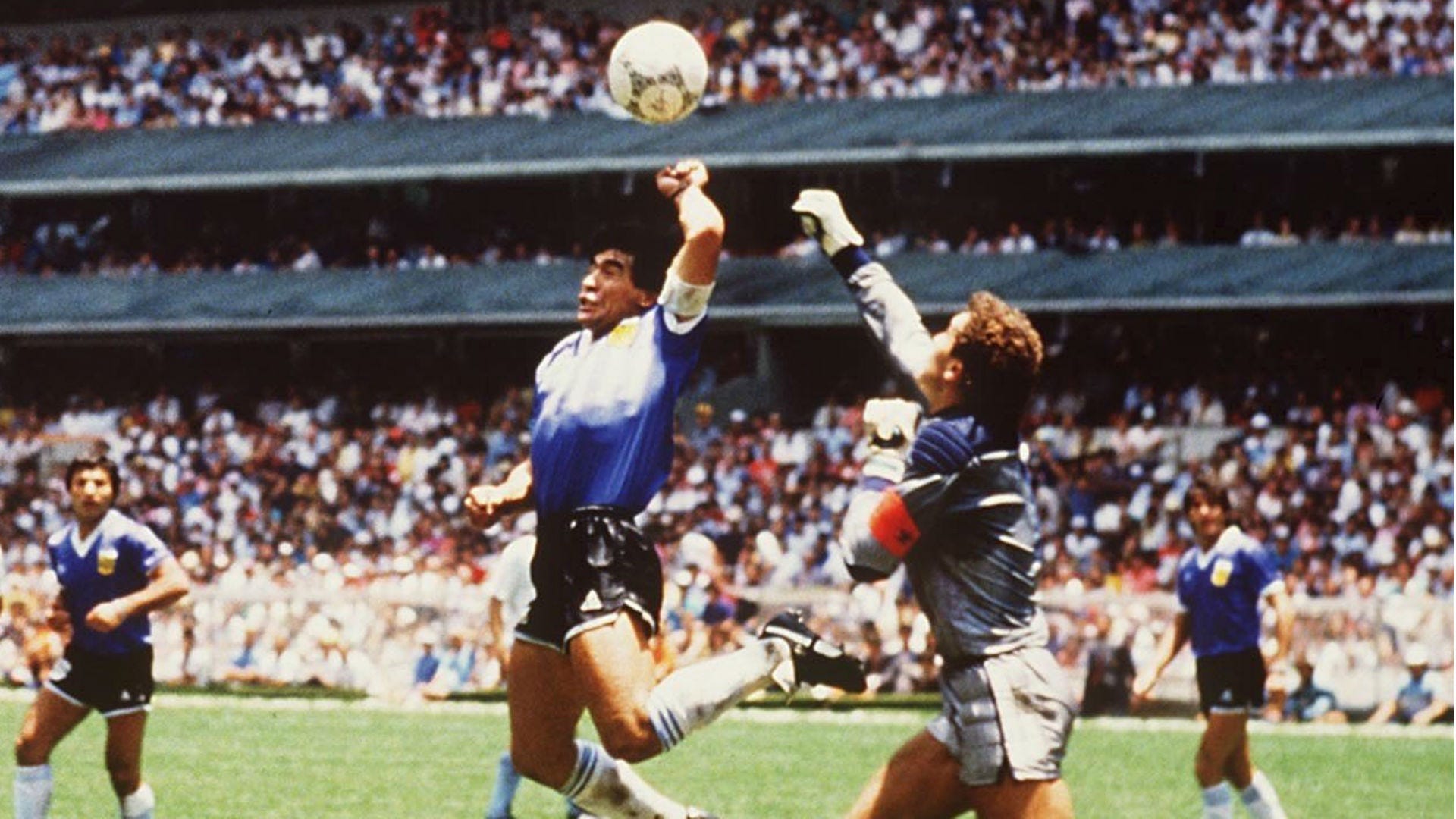 15. Diego scored using his hand in the quarter-final of the 1986 World Cup against England. When he was quizzed about the incident, he said: “The goal was scored a little bit by the hand of God, a little by the head of Maradona.”

17. In the 1994 World Cup in the USA, Maradona played only two games - scoring one goal against Greece – as he was sent home after failing a doping test.

19. In 2005, Maradona started hosting a talk show on Argentinian television. Pele was his main guest on his very first show, despite their rivalry.

20. He was confirmed as the manager of Argentina's national team in October 2008.

21. During his reign as manager, Argentina equalled their worst ever defeat by losing 6-1 to Bolivia in World Cup qualifiers. This led to Maradona taking a fair amount of criticism. And when his side did qualify for the tournament, he launched into an infamous "keep sucking" rant. FIFA banned him for two months after the outburst.

22. Maradona’s managerial debut for Argentina was on November 19, 2008. On that day, his side took on Scotland at Hampden Park and emerged victorious with a 1-0 scoreline.

23. Maradona died on November 25, 2020 - the anniversary of both George Best and Fidel Castro, no less - after suffering a fatal heart attack.

24. In a press conference prior to the first knockout round in the 2010 World Cup, Maradona jumped over the barrier to embrace former Napoli team-mate Salvatore Bagni, a footballer turned pundit. Following the gregarious greeting, Bagni said: "Even knowing him as I have done all these years, Diego always does something to surprise you."

25. Maradona vehemently defended Lionel Messi after Argentina were eliminated from the 2010 World Cup when he said: “Anyone saying he didn't have a great World Cup is an idiot.”

26. Former team-mate Jorge Valdano said of him in 2006: “He is someone many people want to emulate, a controversial figure, loved, hated, who stirs great upheaval, especially in Argentina... Stressing his personal life is a mistake. Maradona has no peers inside the pitch, but he has turned his life into a show, and is now living a personal ordeal that should not be imitated.” 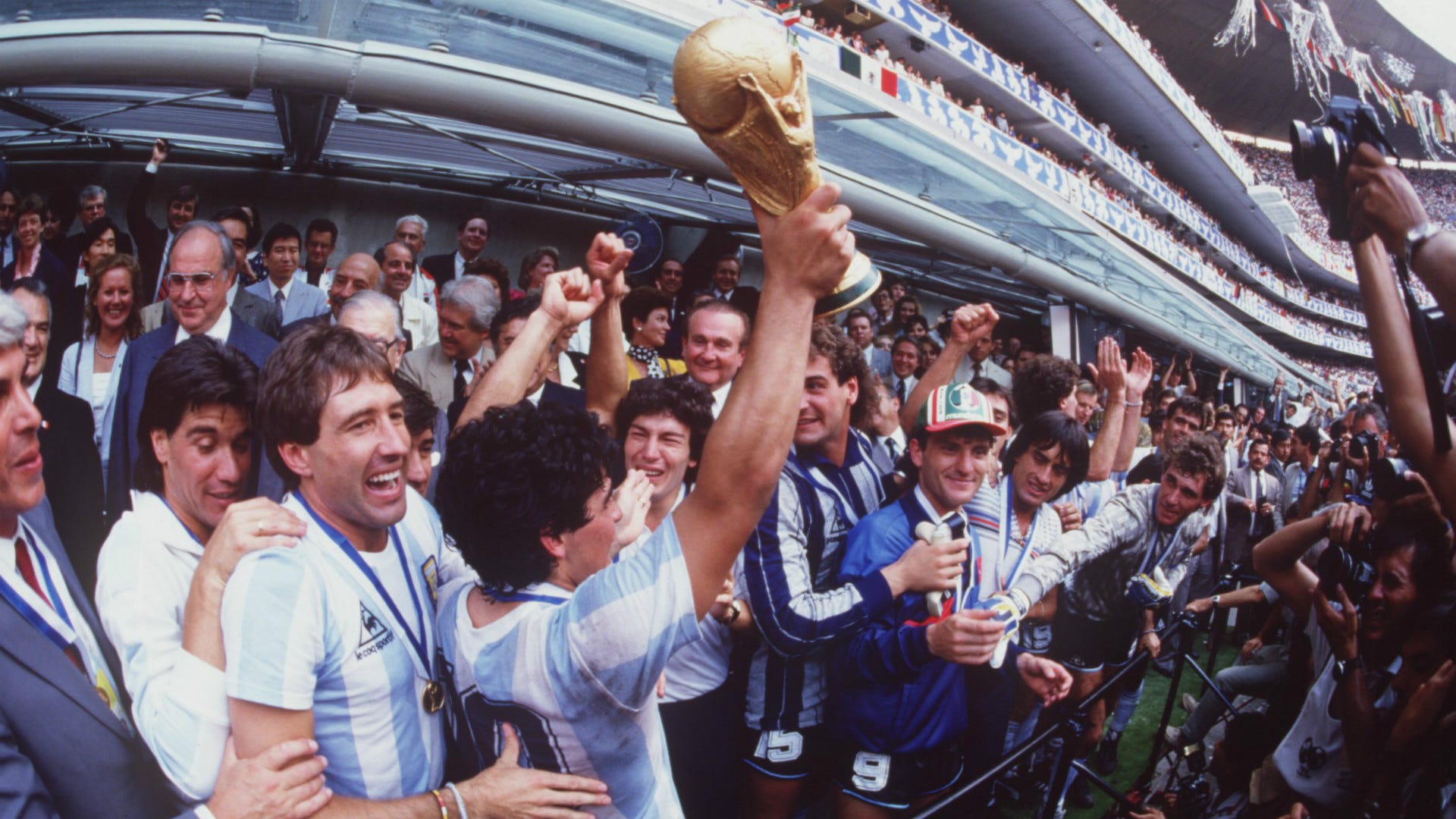 27. The Argentine Football Association (AFA) once put in a request to FIFA to retire the No.10 shirt in honour of Maradona. The request was denied.

29. Maradona said after beating England in the 1986 World Cup quarter-final: "It was as if we had beaten a country, more than just a football team."

30. Maradona stated in 1996: "I was, I am and I always will be a drug addict. A person who gets involved in drugs has to fight it every day."

31. In 2000, FIFA decided to do a one-off Player of the Century award for the new millennium. After eventually arriving at the decision that Pele and Maradona would share the award, the Brazilian said: “If he thinks he's the best player of the century that's his problem.”

32. Asked once to name his starting XI in 1990, Argentina manager Carlos Bilardo famously said: “Maradona and 10 others.”

33. Maradona was appointed the sports vice-president of Boca Juniors in 2005. He quit a year later.

34. Serbian filmmaker Emir Kusturica made a documentary about Maradona, which premiered at the Cannes Film Festival in 2008.

36. Ex-England defender Phil Neal said of an 18-year-old Maradona in 1978: "The kid is just unbelievable - he is the best I have ever seen."

38. Maradona’s second goal against England – which came just four minutes after the ‘Hand of God’ - in the quarter-final of the World Cup in 1986 saw him dribble past opposition defenders to eventually beat Peter Shilton to make the score 2-0. FIFA called this the Goal of the Century.

39. Maradona had a lookalike puppet in the French show 'Les guignols de l'info'.

40. He was good friends with Cuban leaders Fidel Castro and his brother Raul.

41. Maradona had to leave Napoli in 1991 after failing a drug test for cocaine.

42. The Argentine refused to go to the opening ceremony of the 2006 World Cup in Germany, saying: "I'm not here to look at bloody Pele walking around." 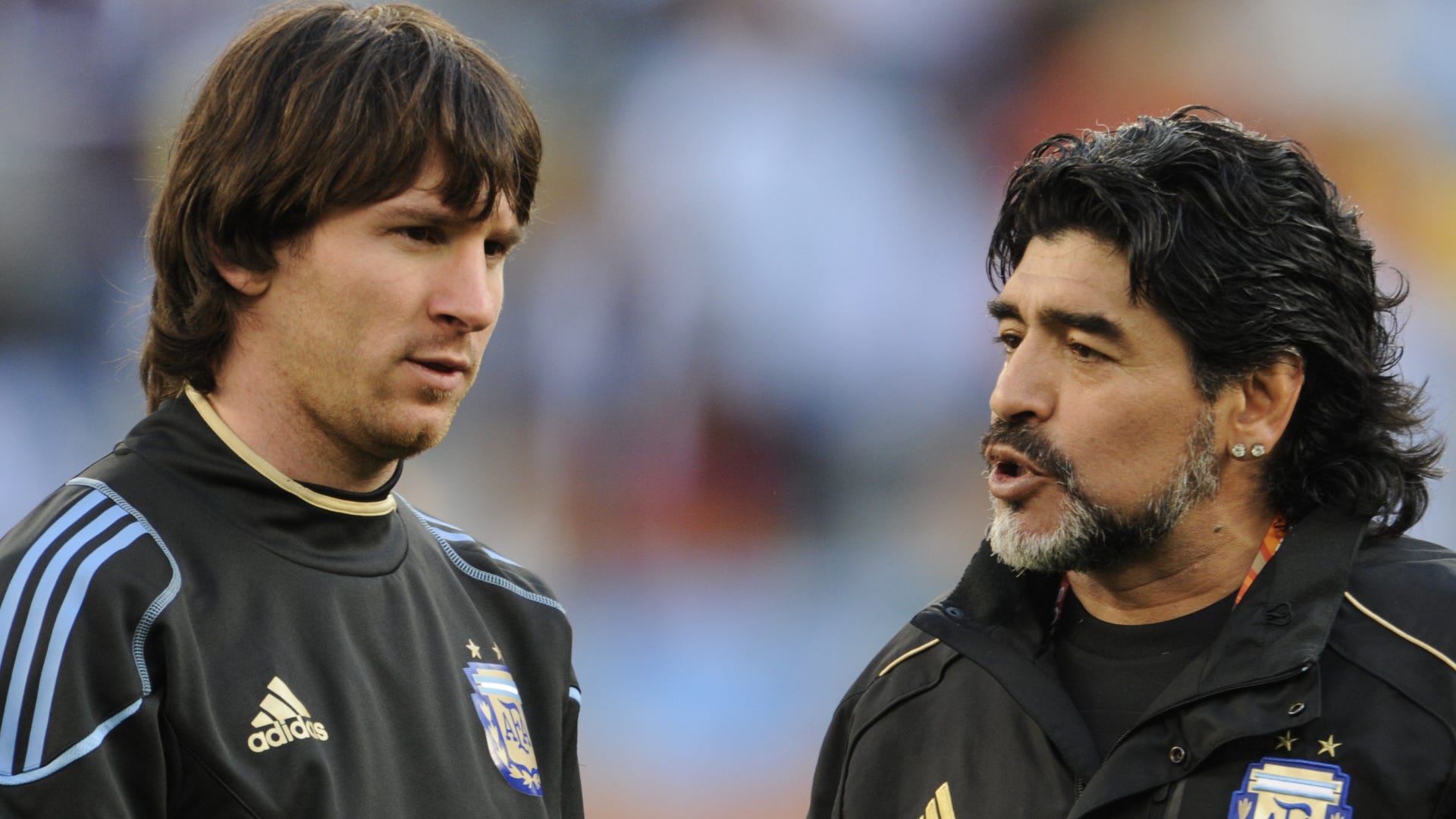 43. In an ongoing war of words with the Brazilian, Pele said during Maradona’s reign as national team boss: “But it isn't Maradona's fault. It is the fault of whoever put him in charge.” The Argentine hit back later, saying: "Pele should go back to the museum. And stay there."

44. Italian officials revealed in 2009 that Maradona owed them €37 million (£32.2m). More than half the sum was interest on the original debt.

46. He is the fifth highest goalscorer for Argentina, behind Lionel Messi, Gabriel Batistuta, Sergio Aguero and Hernan Crespo.

47. Scottish fan group The Tartan Army have a chant in praise of Maradona for sending their neighbours out of the 1986 World Cup.

48. Maradona stated about World Cup 1998: “The players have all got square feet. They are like Robocops, they have more need of lubricant than massage. I don't believe the tournament could be worse.”

49. The IIMSAM (Intergovernmental Institution for the Use of Micro-algae Spirulina Against Malnutrition) appointed Maradona as its Goodwill Ambassador in 2006.

50. In a book on Maradona in 1997, Argentinian psychologist and author Gustavo Bernstein noted: “Maradona is our maximum term of reference. No one embodies our essence better. No one bears our emblem more nobly. To no other, in the last 20 years, have we offered up so much passion. Argentina is Maradona, Maradona is Argentina.”

51. Maradona is the only player in the history of football to have broken the record transfer fee twice.

52. Franco Baresi and Paolo Maldini described him as the toughest player they had ever played against.

53. He and Messi are the only players to have won the Golden Ball at both the FIFA U-20 World Cup and FIFA World Cup.

54. On August 17, 2015, he visited Ali Bin Nasser, the Tunisian referee and paid tribute by presenting a signed Argentine jersey. Bin Nasser was the man who refereed the match in which Maradona scored the ‘Hand of God’ goal.

55. In 2000, he published his autobiography “Yo Soy El Diego”, meaning "I Am The Diego." He donated the Cuban royalties of his book to the Cuban people.

56. The Argentine-based Konex Foundation granted him the Diamond Konex Award in 1990, one of the most prestigious cultural awards in Argentina. He was awarded for his contribution to sports.

57. After smashing a photographer’s car window for being intrusive, Diego said: “I did it with the hand of reason.”

58. Bob Wilson said of Maradona: “He is a flawed genius who has now become a genius who is flawed.”

59. In a match against Real Madrid, he dribbled past goalkeeper Agustin and defender Juan Jose before slotting in the goal. He was applauded by the opposing fans – one of the few players to have received such an ovation.

60. He forged a partnership with Bruno Giordano and Careca to take Napoli to their second Serie A win in 1989-90. They were called the ‘Ma-Gi-Ca’ (Magic) front line. 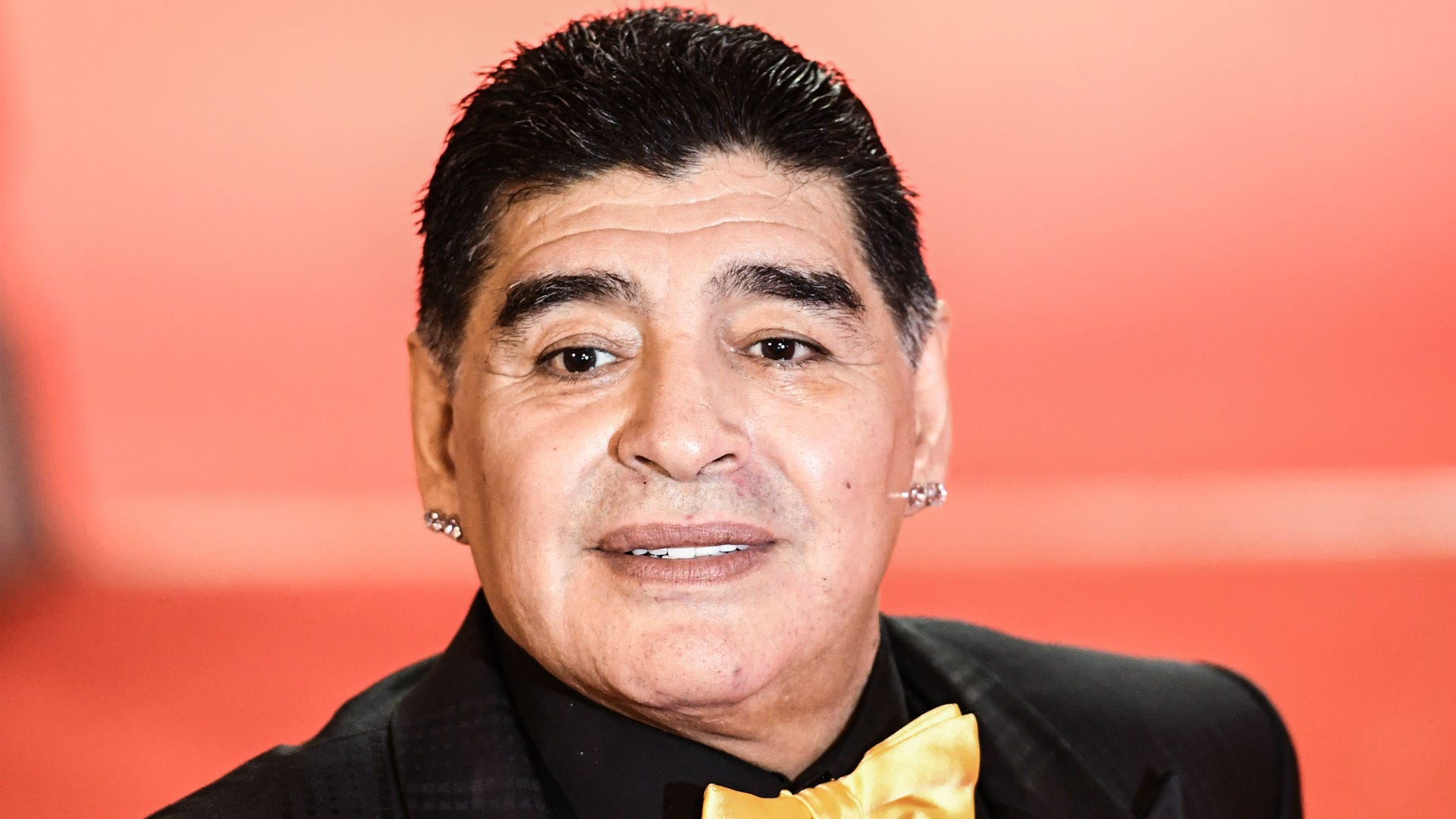 61. He did not make the 1978 World Cup team as, at 17 years old, he was considered to be too young by then-coach Cesar Luis Menotti.

62. In 2019, a biopic based on the player, titled 'Maradona' and directed by Asif Kapadia, and produced by James Gay-Rees who made 'Amy', was released.

63. As a tribute to Maradona's excellence, the authorities at the Azteca Stadium built a statue of him scoring the “Goal of the Century” and placed it at the entrance of the stadium.

64. Maradona has fathered two children – legally. He once said about fatherhood: “My legitimate kids are Dalma and Giannina. The rest are a product of my money and mistakes.”

65. In December 2007, Maradona presented a signed shirt with a message of support to the people of Iran, and it is displayed in the Iranian Ministry of Foreign Affairs' museum.

66. Maradona visited the tomb of Hugo Chavez in April 2013 and urged Venezuelans to elect the late leader's designated successor, the socialist Nicolas Maduro: "Continue the struggle," Maradona said on television.

67. Film director Kusturica once said of Maradona: "I asked myself, 'Who is this man? Who is this footballing magician, this Sex Pistol of international football, this cocaine victim who kicked the habit, looked like Falstaff and was as weak as spaghetti?' If Andy Warhol had still been alive, he would have definitely put Maradona alongside Marilyn Monroe and Mao Tse-Tung. I'm convinced that if he hadn’t been a footballer, he'd've become a revolutionary."

68. Maradona was featured as a legendary player in FIFA 18 and Pro Evolution Soccer 2018.

69. Brazil-born Diego Costa was named in honour of Maradona despite the rivalry between Argentina and Brazil.

70. Maradona was featured in the music video to the 2010 World Cup song "Waka Waka" by Shakira, with footage shown of him celebrating Argentina winning the 1986 World Cup.