The man who brought the Netherlands international to the UK was also involved in the development of Kieran Tierney, Wilfried Zaha and Jamal Musiala

Though there have been some question marks over his form this season, there is no doubting that Virgil van Dijk remains one of, if not the world's premier centre-back.

How, then, did it take him so long to earn himself a move to one of Europe's elite clubs?

Van Dijk was 26 when he joined Liverpool in January 2018, having taken in spells at Celtic and Southampton following his departure from boyhood club Groningen in the Netherlands.

Clearly there was something that scouts and coaches were seeing in Van Dijk during his development that they did not like, even if they were being advised that the Dutchman truly was the real deal.

One of those who used to sing Van Dijk's praises to those interested in signing him was David Moss, who was overseeing Celtic's senior scouting department when they signed the defender in 2013.

Moss, a former midfielder in both England and Scotland, was regularly sought out for reports on Van Dijk from the great and good of the game while the 30-year-old was impressing at Parkhead.

Eventually Southampton bit, paying just £13 million ($17m) to bring Van Dijk south in 2015. Three years later, he would be sold for over six times that amount to Liverpool.

"With Van Dijk, we signed him from Groningen in Holland," Moss recalls to GOAL. "Our player trading model was the only way we could make money, so we would actively look to sell players to the Premier League after two or three years. That was a success for both us and them.

"When he was at Celtic, the number of Premier League clubs that used to phone me and ask about Van Dijk was huge. I always said the same things to everyone: ‘He is like a grown man playing in a children’s playground - he stands out like a sore thumb. Just sign him immediately, don’t think about it.'

"He was fast, won all his headers, you couldn’t beat him one-v-one, he could pass 60 yards on both feet and he scored free-kicks. Incredibly, I kept getting excuses.

"They were often about his performances in the Champions League or saying doing it in the Scottish league didn’t mean a lot, and people wouldn’t listen.

"Everyone inside Celtic had total belief in him, but a lot of people in football didn’t. For me, he didn’t need the Southampton step, he was ready for a big six move straight from Celtic. They just weren’t brave enough to bring him in." 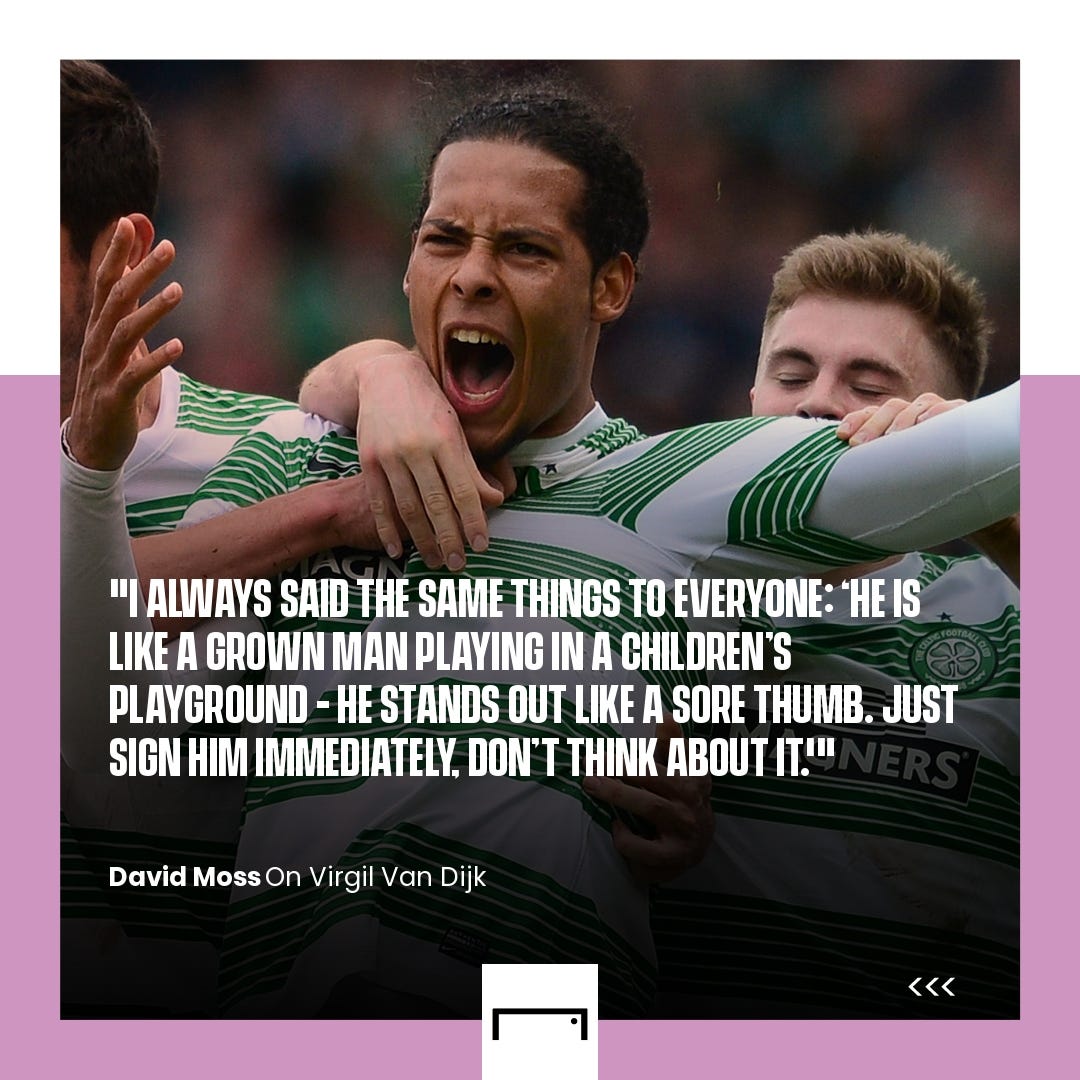 Moss spent seven years at Celtic having also worked as an academy director for Crystal Palace and Swansea City, before going onto become head of football operations at Huddersfield Town following their promotion to the Premier League in 2017.

He has gone onto work as an agent for First Access Sports, where he handles a roster of up-and-coming prospects at clubs such as Chelsea, Manchester City and Bayern Munich.

Moss' ability to mentor young talent, though, has always been there, with Arsenal defender Kieran Tierney one of those who he always championed during his time at Celtic.

"Tierney was only 13 when I joined Celtic, and in my third or fourth week, we went to a tournament for top clubs in Belgium," Moss, who received a text message from the Scotland international that thanked him for his support upon his £25m ($33m) move to the Emirates Stadium in 2019, says.

"We were playing Barcelona and Real Madrid and he was on the bench as a second choice left-back. It was like that until the Under-16s really. It was because he was smaller than the others and there was another one they preferred at the time.

"Sometimes you have to look past the immediate output and see potential, and that's what I saw in Kieran. I always saw Kieran had determination and character, which is a big part of being a professional.

"He isn’t a Wilf Zaha (who Moss also helped develop) in terms of technique or catching the eye, but he does have some technical ability and combines it with being athletic and mentally strong." 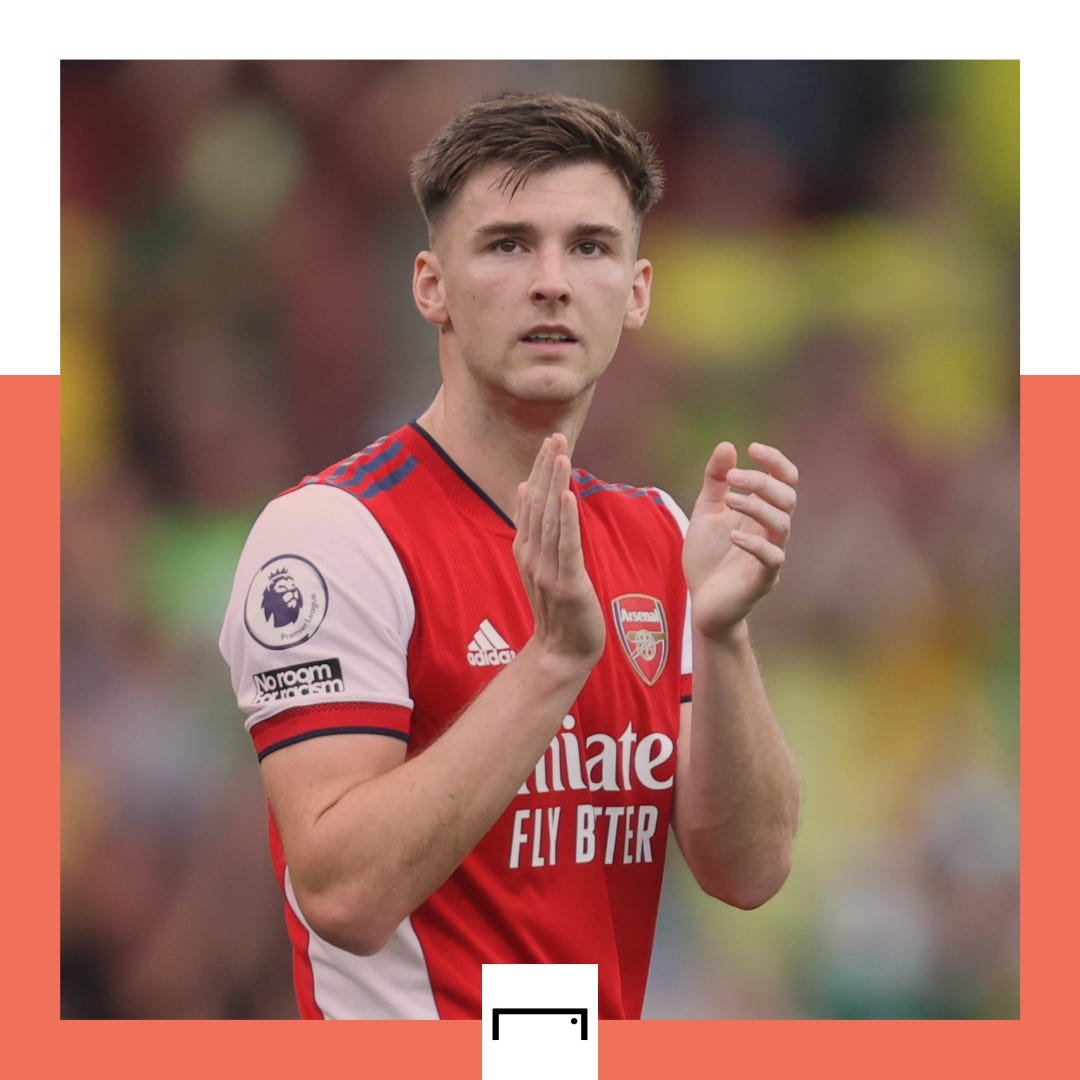 Moss now uses his experience from his various roles in the game to argue his case for his footballling clients, with one of his biggest success stories coming in the form of Jamal Musiala's move to Bayern Munich.

Musiala has emerged from being a little-known Chelsea academy prospect to a record-breaking star for both Bayern and Germany in the space of 18 months, with the ex-England youth international not due to turn 19 until February.

"Jamal Musiala came out of contract at Chelsea. and the additional fact that his mum is German attracted them," Moss explains. "Even so, I don’t think Bayern saw right away the real potential that we saw in Jamal.

"Incredibly, they weren’t always picking him for the U17s team at Bayern Munich. Myself and Louis Bell (his partner at the First Access Sports agency) went over to speak with the coaches and asked what was going on. We would get told they knew he had the ability, but he needed to work harder off the ball.

"We pushed and pushed for him, and he went from struggling to get in the U17s team to become one of the most exciting talents in world football.

"When you have a belief in a player like that, you have to stand up for them, because clubs do make mistakes. That is where representatives with a football brain can help." 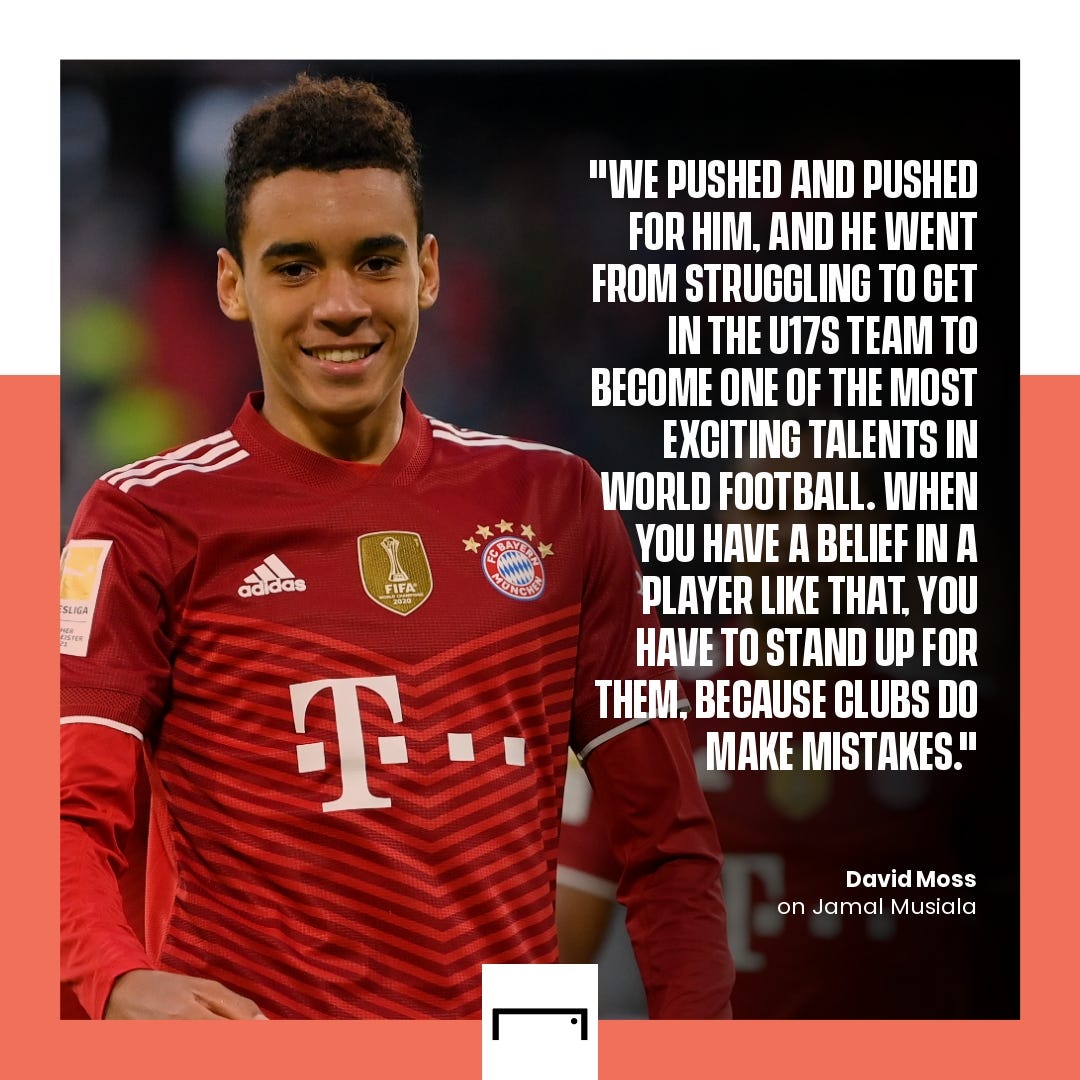 One such mistake at Moss recalls is Celtic's failure to sign Lazio star Sergei Milinkovic-Savic when the Serbia international was breaking through at Vojvodina, and would have been available to sign for around €600,000.

"I was scouting people like Milinikovic-Savic at Vojvodina before he went on to do what he did," he says. "Genk took him, but I watched him three times and pushed for it. Unfortunately, when those higher up watched him live, he had a rare bad game."

Moss is clear that he wants to avoid any further mistakes now he is on the other side of the club-agent divide, and is keen to make sure his clients - such as in-demand Hibernian teenager Josh Doig, in whom there was Premier League interest this summer - go onto have the best careers possible.

"This is a ruthless business but I have seen it all through a totally unique career in almost every role there is to do in the sport," he concludes. "My main aim now is that I can guide the next generation through it all.

"The players that I represent will be able to tell their grandchildren about their stories developing at some of the biggest and best clubs in the world."