In an exclusive interview with Goal, Udinese's strategic marketing coordinator, Magda Pozzo, explains how the Serie A side are tackling the crisis

Sunday's shock victory at Lazio was undoubtedly a cause for celebration at Udinese.

Not only did the 3-1 win move the Zebrette up to 13th place in the Serie A standings, five points above the drop zone, it also arrived on the eve of the anniversary of their foundation on November 30, 1896.

Obviously, though, there will be no festivities with fans in Udine to mark either the win or the club's birthday. The pandemic has seen to that.

For the smaller clubs in Europe’s ‘Big Five’ leagues, the ‘fight for survival’ used to be about avoiding relegation. These days, though, it is a very literal battle against the existential threat posed by the economic crisis caused by Covid-19.

Udinese have long been regarded as one of the most progressive clubs in Italy, primarily because of their impressive scouting network, which enabled them to collect gems such as Marcio Amoroso, Alexis Sanchez, Juan Cuadrado, Kwadwo Asamoah and Samir Handanovic, and sell them on at an enormous profit.

And they knew as soon as the pandemic began to take hold in Italy in February that football was facing an unmitigated disaster, with serious emotional and financial consequences.

“We were the first Serie A club to start offering Zoom support for everyone connected to the team,” Magda Pozzo, Udinese’s strategic marketing coordinator, tells Goal.

“We provided the management team with programmes but also offered the players and their families advice on how to cope with this situation, which was so stressful and unprecedented.

“And I think our people and partners really appreciated that. And still do.”

Indeed, the pandemic is an ongoing nightmare for the entire world. After a three-month suspension of play, football is doing is utmost the keep the show on the road, with the majority of games being played behind closed doors.

Of course, the lack of gate receipts is a major problem for clubs such as Udinese, who receive a smaller share of TV rights revenue than Italy’s elite. Serie A, after all, is not the Premier League, which makes more than a billion pounds from broadcasting deals.

Luckily, Udinese were well used to trying to come up with different ways to bridge the growing divide between the haves and the have-nots in European football.

"When I started working in football eight years ago, about 95 per cent of the revenues came from TV rights and gate receipts, so people in the industry weren't really stimulated to try different things, to think outside the box,” Pozzo explains.

“Obviously, my family has an industrial background and that’s where I was coming from, so when I arrived in football, I said, 'This is ridiculous. We have to create other revenue streams related to football.’

“You can't be complacent or lazy in any business. And that's as true for the big clubs as it is the smaller ones. You can't rest on your laurels.

“There is a good financial base there in football because of sponsorship opportunities and TV money, but not generating money from crowds is an issue. We suffer more than most because of the lack of matchday revenue.

“So, when something like coronavirus happens, you realise you have to be independent and smarter in how you approach the business.

“In our case, one of my missions right from when we opened the Dacia Arena was that we were able to expand in other areas. You can't be dependent on what's happening on the pitch.

“I think, then, that the pandemic has provided every club with an important lesson.” 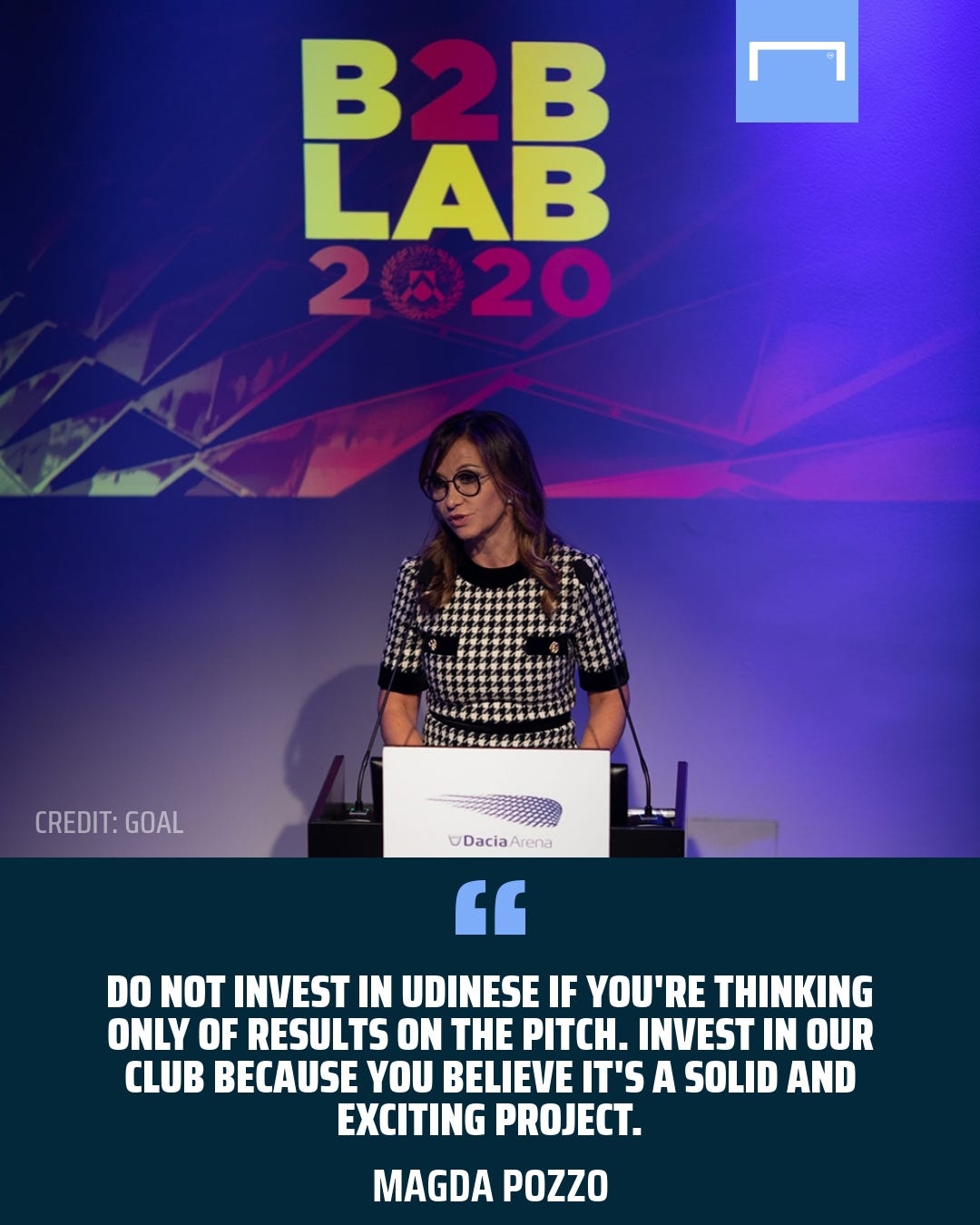 It has certainly cast football’s financial model in an unfavourable light, as it has exposed the widespread dependency upon television money. The mere fact that world champions Liverpool felt compelled to seek financial aid from the UK government highlighted the precious nature of the industry.

The risk of bankruptcy is obviously even greater for smaller sides, but Pozzo also sees opportunity in difficulty.

"It's getting tougher and tougher for us to compete,” she concedes. “The earnings of a club are based on player wages, the transfer market, sponsorship and TV rights, and the distribution of TV rights is something that the smaller clubs have to fight for.

“However, I firmly believe that smaller clubs have to be more creative. You have to create content through football, so that the club doesn't just rely on results to survive.

“Firstly, in terms of transfers, Udinese were really the first team in Italy to be based on an international scouting strategy. When we started, nobody was doing that, not even the biggest clubs in Serie A. So, we were really unique in that.

“Now, with the increase in globalisation and the advancements in technology, it's more difficult for clubs like us.

“However, because we started doing this before so many others, we have an advantage in that regard. We're not new to this. We already had a massive network of scouts. Now, it's even bigger. So, we still have an edge on our rivals.

“In addition, a relationship with Watford in England was very helpful for us, to have that synergy, as it's something that can give you an advantage in what is now an even more competitive and more difficult market for smaller clubs.

“Perhaps most importantly, Udinese, Juventus, Sassuolo and Atalanta are the only Italians teams to own our own stadium. It may be closed at the moment but the stadium is an incubator of ideas that must always remain open.

"It shouldn’t just be active on matchdays. It should be open 365 days a year as everyone at the club focuses on ideas and projects that are not related to the actual games.

“The big advantage for smaller clubs is there is greater room for marketing innovation. We can do more creative things than bigger clubs because we're more flexible and we need to create a strategy that exists and functions outside the pitch.

"Years ago, that was impossible; results were everything. But now it is essential and possible to be about more than just the football.

“I always say to our partners: ‘Do not invest in Udinese if you're thinking only of results on the pitch. Invest in our club because you believe it's a solid and exciting project.’”

One built to survive the effects of the pandemic, on and off the field.