Chelsea's transfer policy has come under plenty of scrutiny during Todd Boehly's first window at the helm, but one thing is for certain - the new American owner has made it a priority to sign some of the best teenage talents around.

The star of England's Under-19 European Championship-winning side, Carney Chukwuemeka, has arrived from Aston Villa in a deal worth up to £20 million ($24m), while Gabriel Slonina has been brought in from Chicago Fire, with the Blues committing to pay up to £12.3m ($15m) for the American goalkeeper.

Omari Hutchinson's arrival from Arsenal also raised plenty of eyebrows, while the under-the-radar captures of Zak Sturge and Shim Mheuka from Brighton, as well as Tyler Dibling from Southampton, have the potential to be seen as absolute steals in the long run.

Chelsea, though, are not finished there.

While much of the focus regarding their late-window activity is on their pursuit of first-team ready players such as Pierre-Emerick Aubameyang, Frenkie de Jong and Anthony Gordon, the team from Stamford Bridge continue to add to their youth ranks.

The latest player through the door is 19-year-old midfielder Cesare Casadei, who arrives in west London from Inter in a deal worth up to £16.8m ($20.3m).

Chelsea beat off stiff competition from Nice to sign Casadei, for whom they had a number of bids rejected before finally agreeing a deal.

But who is Casadei, and what are his chances of breaking into the Chelsea first team anytime soon?

Raised in the seaside town of Cervia, Casadei and his older brother, Ettore, both dreamed of becoming footballers, with Ettore's dream having come true to an extent as he currently plays in Serie D with Savignanese.

Cesare, however, always stood out as a potentially special talent, first at his local club Cervia and then when he was enrolled into the Cesena academy.

Both physically and technically he was ahead of boys his own age, with his vision of the game and tactical intelligence far outweighing his lack of experience.

Nothing was going to stop Casadei from reaching his goals, either. He once walked 22 kilometres in the rain from Cervia to Cesena so as not to miss a training session having been punished by his mother.

Soon he earned comparisons to former Italy and AC Milan midfielder Marco Ambrosini, who also came through the ranks at Cesena, and Casadei was keen to follow in his footsteps, having supported the Rossoneri as a child.

He was even recommended to Milan in 2018, just weeks before Cesena declared bankruptcy. It was at this point, though, that Inter swooped in, having been impressed by the midfielder when their youth teams had faced Cesena earlier that season. 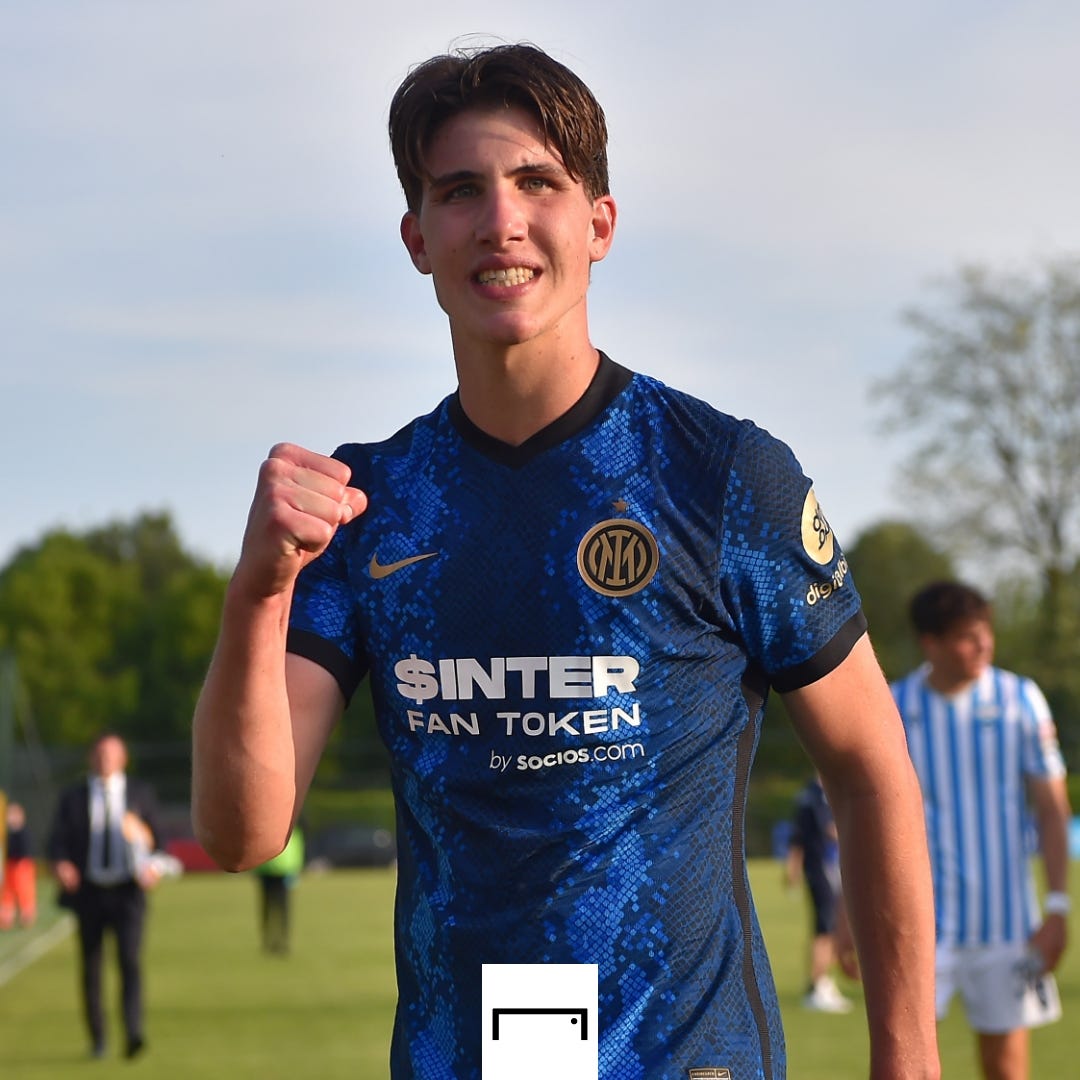 "Now I am an Inter fan," declared Casadei upon his arrival, and despite being just 15, he was almost immediately promoted to the Nerazzurri's U17s. He would move up again at the start of the following season to the U18s, before marking his Primavera (U23s) debut with a goal in January 2020.

Goals have become a key part of Casadei's game despite him playing predominantly as a No.8, and he netted 15 times in 33 games for Inter's championship-winning Primavera side in 2021-22.

Standing at over six foot tall, it should perhaps come as no surprise that nine of those goals were scored with Casadei's head, while his height allows him to move around the pitch smoothly and at decent pace.

He has been likened to Sergej Milinkovic-Savic by regular watchers of Inter's age-group teams - a comparison Casadei welcomes, telling Gazzetta dello Sport: "I like him a lot for the characteristics he has and for how he plays, he is a player from whom I draw inspiration. But to get to those levels you have to work a lot.

"At Inter, I obviously look at the midfielders, in particular [Marcelo] Brozovic and [Nico] Barella: they are two great champions. What would I steal from them? Barella's intensity, and Brozovic's calmness with the ball." 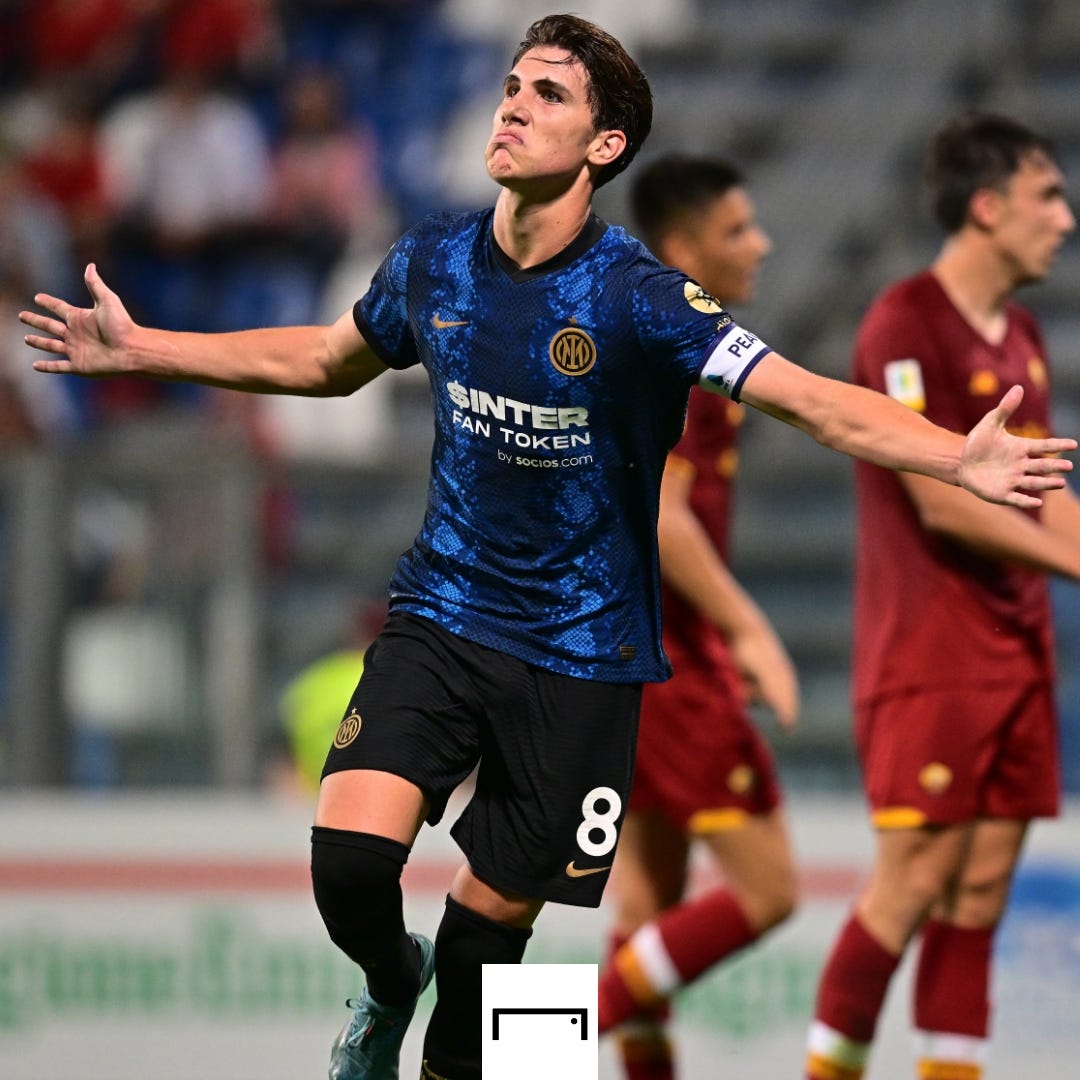 He will certainly have more top-tier midfielders to learn from at Chelsea, and it will be interesting to see just how quickly he can force his way into Thomas Tuchel's thinking.

Casadei made the bench just once in Serie A last season, but given the money spent on him, there should be an expectation that fans at Stamford Bridge can catch a glimpse or two of him as the 2022-23 campaign wears on.

Certainly Boehly seems to think that investing in youth is a worthwhile transfer strategy, and Casadei has all the tools to make the new owner's vision a reality.