Forget the questions about money for a moment - Camp Nou has its new icon!

Barcelona have confirmed an agreement to sign Robert Lewandowski from Bayern Munich as Xavi’s rebuild at Camp Nou continues apace. The confirmation of the deal comes at the end of a saga which began before even the 2021-22 season was over, and ends with Barca once more having a modern icon of the game on their books, a year on from Lionel Messi's departure.

How much have Barcelona paid for Lewandowski?

Barcelona will pay an initial fee of €45 million (£38m/$45m) to bring Lewandowski to Catalunya, with a further €5m (£4.3m/$5m) potentially due in add-ons if certain clauses are met.

A statement from the club read: "FC Barcelona and Bayern Munich have reached an agreement in principle for the transfer of Robert Lewandowski, dependent on the player passing a medical and contracts being signed."

Agreement in principle for the transfer of Robert Lewandowski

What are Lewandowski's Barcelona contract details?

Lewandowski is expected to sign an initial three-year contract with an option to extend it by a further year, meaning he could remain at Camp Nou through until the end of the 2025-26 season.

How can Barcelona afford Lewandowski?

Barcelona's financial issues have been well documented this summer, leading to eyebrows being raised at the arrival of Lewandowski and Barca's other new signings.

Blaugrana president Joan Laporta was given permission to sell club assets by the Barca members' assembly last June as they targeted investment funds capable of providing financing so that operations could run as normal in the short term.

The club sold 10 per cent of its La Liga TV rights to the US firm, which ensured that they turned a profit at the end of the 2021-22 financial year - taking a giant step towards reversing their money woes in the process.

A second economic lever is now being worked on to raise funds so that Barca no longer exceed La Liga's salary limit, with another 15 per cent of their TV rights set to be sold in return for an extra €300m (£254m/$300m).

The Blaugrana are also selling 49.9% of the shares of the Barca Licensing and Merchandising company, which will bring their total revenue for the summer beyond €600m (£509m/$600m) and allow them to register new players for the 2022-23 season.

Why have Bayern let Lewandowski leave?

Back in May, Lewandowski expressed his desire to leave Bayern Munich, rather than see out the final year of his contract at the Allianz Arena.

While Bayern initially were not happy with the public announcement of the player, they have now ultimately decided to let him leave.

Speaking to Bild on Saturday, Bayern CEO Oliver Kahn said: “In the end, Barcelona offered a sum that selling him made absolute sense for us.

“We've also recently been very successful in the transfer market and signed an absolutely world-class player for the offence in Sadio Mane."

Though notionally a wide player, Mane may well be tasked with leading the line from a central position once the new Bundesliga season starts if Bayern do not sign a direct Lewandowski replacement.

How will Barcelona line-up with Lewandowski?

The 33-year-old Poland forward will almost certainly be a regular starter for Barcelona, but will face competition from Pierre-Emerick Aubameyang, who joined the club in January 2022 and regularly featured in Xavi’s line-up as a No.9 in the second half of last season.

Memphis Depay is also still at the club, though there remains an expectation that he could be sold before the end of the transfer window. 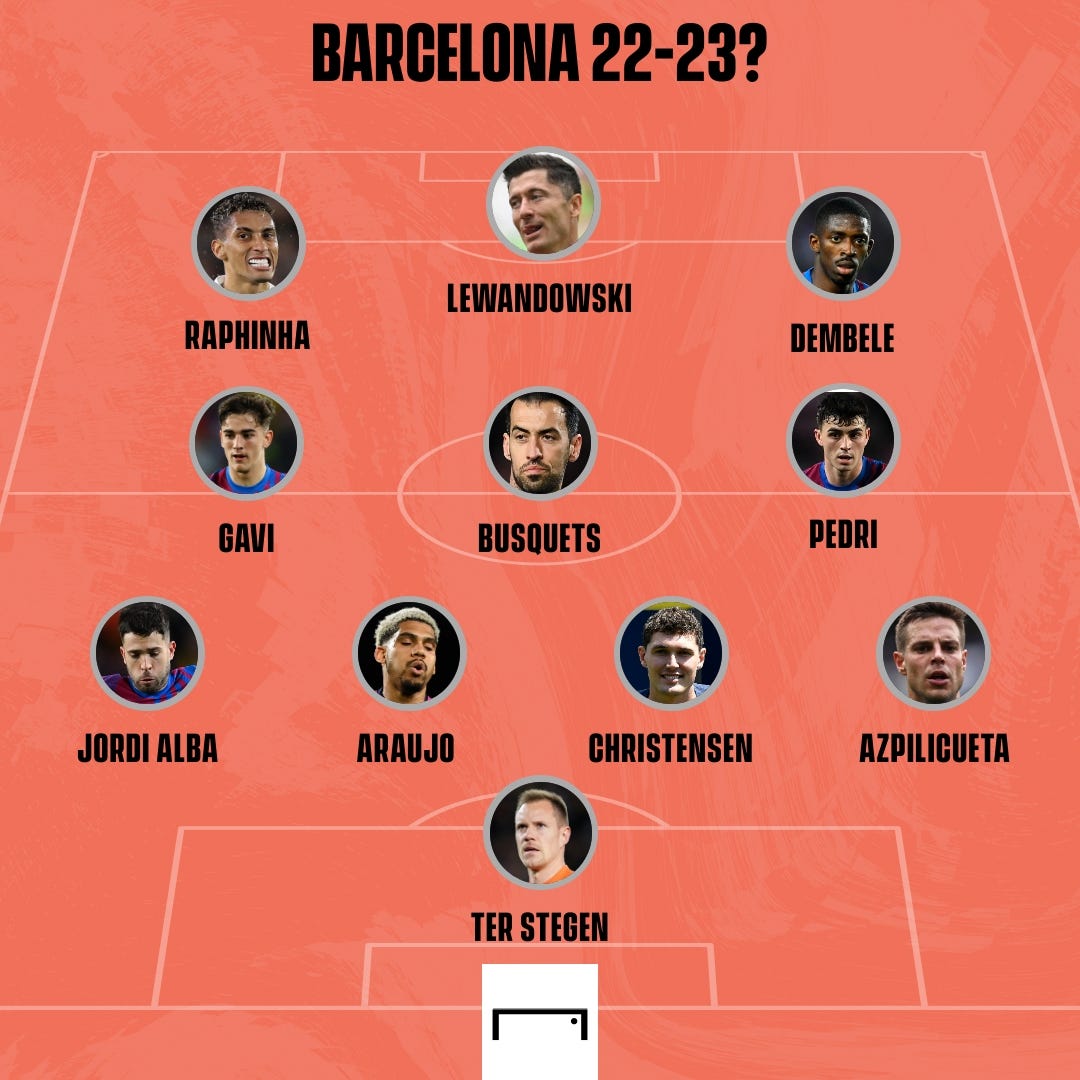 Lewandowski will not be short of creative players around him, either, with the signing of Raphinha from Leeds United and the decision to tie Ousmane Dembele down to a new contract meaning they will be battling with Ansu Fati and Ferran Torres for starting berths out wide.

Barcelona have already completed the signings of Raphinha, Andreas Christensen and Franck Kessie as well as Lewandowski, but they are not done yet.

Chelsea full-back duo Cesar Azpilicueta and Marcos Alonso are both on Xavi's summer wish list, while Manchester City midfielder Bernardo Silva is also a target, though they may be priced out of a move for the Portugal international.

Further central defensive reinforcements have also been discussed, with Sevilla's Jules Kounde thought to be an option after they missed out on Kalidou Koulibaly to Chelsea.