La Academia have been transformed since their former forward idol rejoined the club to oversee its sporting divisions, but he is now set to depart

Having already upset the Copa Libertadores holders Flamengo in agonising circumstances, Racing Club now have their sights set on Carlos Tevez and his champions of Argentina.

The Avellaneda club start once more as underdogs as they kick off their quarter-final clash against Boca Juniors on Wednesday, albeit perhaps not to the same extent as against their Brazilian opponents in the previous round, whom they defeated on penalties after a pair of 1-1 draws.

Breaking into the Libertadores last eight is an achievement in its own right for the club, and one that can be attributed to one man in particular: club legend, and outgoing technical secretary Diego Milito.

A double Primera Division title winner with La Academia as a player in 2001 and 2014, Milito returned to Racing at the start of 2018 in a new role alongside freshly appointed coach Eduardo Coudet.

The handing out of such positions, be they as technical secretary, sporting director, director of football or the rather confusing (to English-speaking ears) 'manager' post is a common honour for club favourites, and often means little more than a popular buffer between irate fans and presidents when results take a turn for the worse.

Milito, however, applied to his job the same dedication, commitment and intelligence that served him so well on the pitch for the likes of Racing, Genoa and Inter, transforming the club both on the pitch and off it.

Out went transfers negotiated directly with agents or as stop-gap measures.

The new secretary, who was given final say on all arrivals, departures and coaching appointments as part of his remit, brought in a team of scouts headed by Javier Wainer with the specific brief of identifying the best talents from across Argentina and South America, while also investing in modern software and video technology to maximise each observer's capabilities.

This professionalised approach aims to ensure that Racing receive the best possible return on every transfer. For a club which, while comfortable enough financially in local terms, is dwarfed budget-wise by Argentina's two biggest sides and even more so by the top teams in Brazil, this is crucial.

Last year alone Carlos Lema, a member of the scouting team, took in no fewer than 75 youth games involving lower league sides in a bid to find gems overlooked by other clubs.

"One gesture is sometimes enough to realise if a kid is good enough," he explained to  La Nacion. "If he did something to surprise you, he might be able to do other things, too."

“We have to be creative,” Wainer, meanwhile, told the New York Times. “We have to have a network that means we can get players before bigger clubs because financially we cannot compete with River Plate and Boca Juniors.” 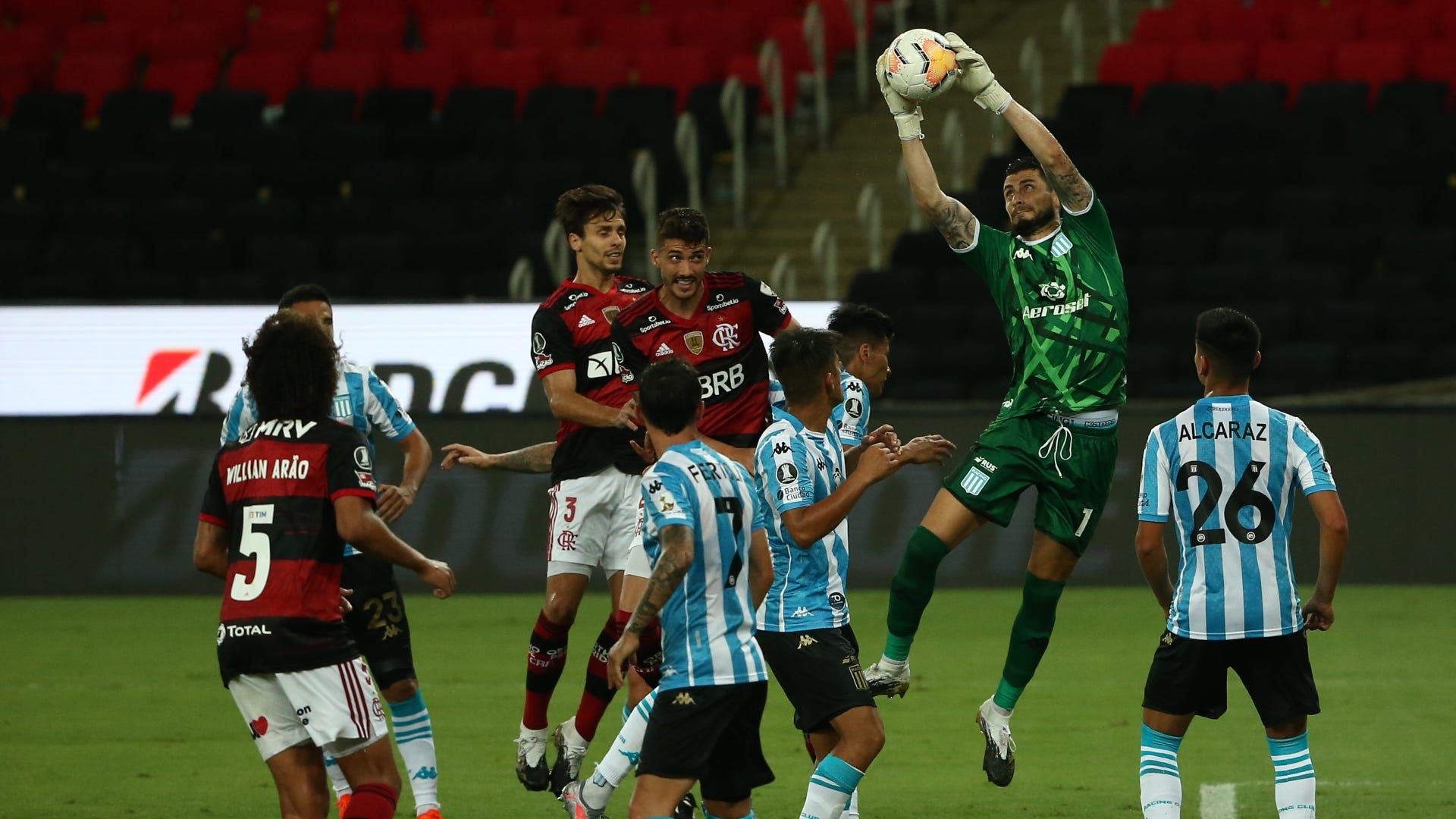 More than 300 kids turned out and 12 went on to join the club at youth level, with 10 more tournaments planned for 2020 before the Covid-19 pandemic intervened.

Simultaneously, the Secretariat has made Racing's youth academy their priority.

The team is well known for producing promising talent out of the Tita Mattiussi complex, which was built and maintained by fans during one of the club's lowest ebbs in the late 1990s; Inter's Lautaro Martinez and Udinese playmaker Rodrigo De Paul are recent graduates of a system that honed the likes of Milito, Lisandro Lopez, Maxi Moralez and Sergio Romero.

One failing, though, not just of Racing's academy but across Argentine football, was the tendency to focus on skilful attackers and midfielders to the detriment of players in less glamorous positions. 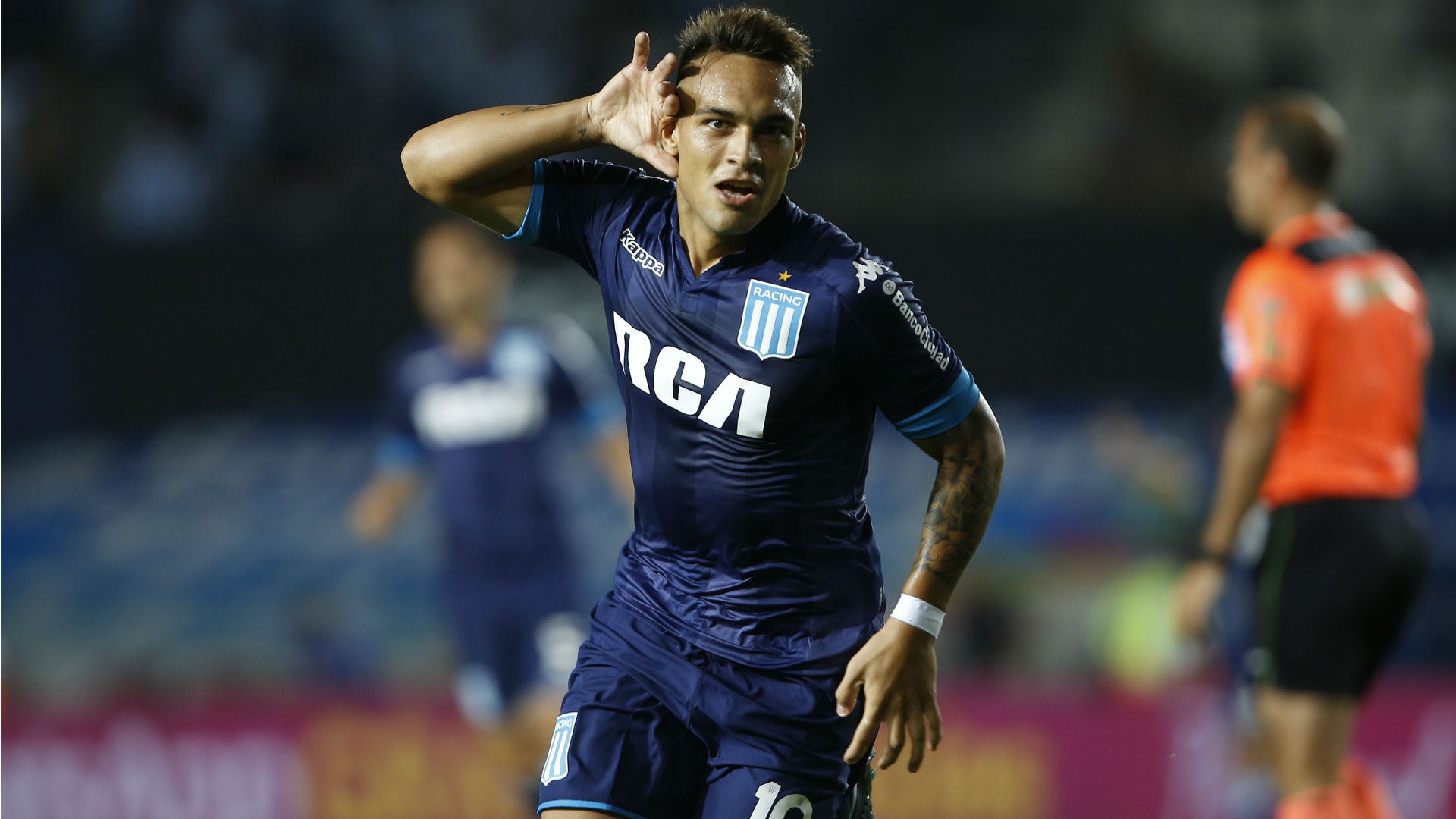 Milito's team, headed by veteran youth coordinator Miguel Gomis, has identified and attempted to address that historic imbalance, concentrating on giving young goalkeepers and defenders the support and expertise they need to develop.

Indeed, one of the first big sales of the Milito era was Juan Musso, who pushed into the Udinese first team almost immediately after signing in July 2018 and is now knocking on the door of the national team.

And while Racing may have gone down to Velez Sarsfield on Friday with several first-teamers rested for the Boca match, the presence of three Tita graduates, all aged 20 or younger, in the Academia defence is a vindication of the club's work in that area and the philosophy behind it.

Many have rushed to dub the Secretariat's work a 'European system', although that is not a phrase that curries much favour within the club itself. After all, Milito's group is made up of Argentines, and there are plenty of examples of ill-managed teams in Europe as there are efficient administrations this side of the Atlantic Ocean.

'European' has also been used by the ex-forward's critics as a stick with which to beat him and his team, both inside Racing and across Argentine football and media as a whole.

Old habits die hard, and it is clear that to put in place such an integral approach requires significant investment, consistency and, above all, patience – factors that are not always in abundance in a country where short-term results are crucial.

Where La Academia have benefited is in the enviable experience Milito and his entire team bring to the table, with the secretary himself admitting one man in particular has influenced his methodology.

“I have always tried to 'steal' things from all the clubs I've been at,” he told Marca in 2019. “My example? I would say Monchi. I read his book and saw how he was working at Sevilla. 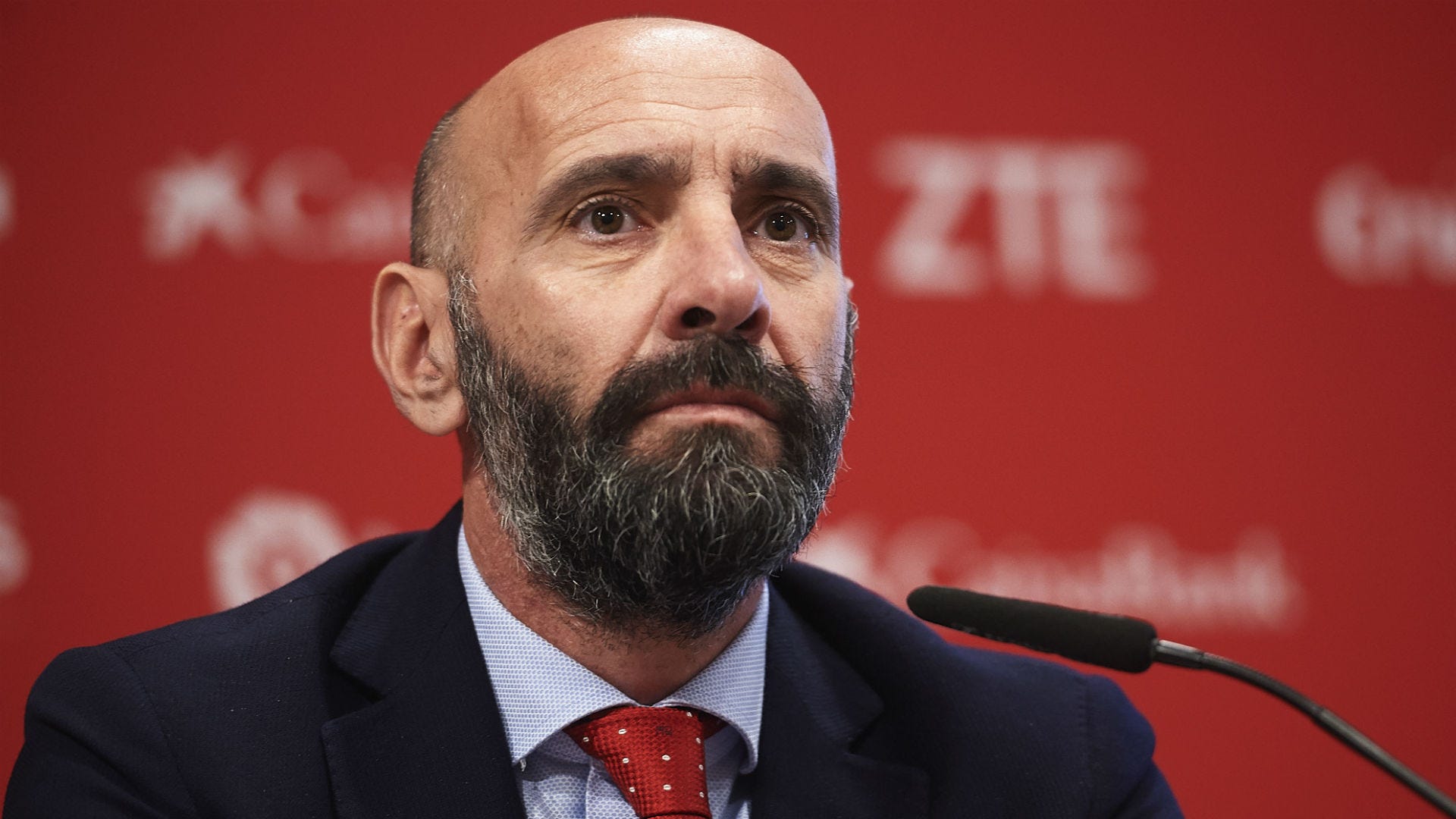 “He is a great example inside this little world.

“You have to work hard. It is a long process. Changing working models overnight is difficult. Things in Europe have been done the right way for years, South America has to take aboard the good things while also clinging onto the interests of football here.”

Nothing breeds success like success, of course. In Milito's first full season and despite selling the likes of Lautaro and Musso, Racing ran out 2018-19 Superliga champions to claim their first title in five years.

The following campaign was not quite as eye-catching, but the team now coached by Jorge Sampaoli's former Argentina No.2 Sebastian Beccacece claimed fourth place and another Libertadores berth for 2021 – only the second time since the 1960s that they have qualified for the competition in consecutive seasons.

Despite that fine track record, though, the internal opposition to Milito's project never abated, and in November 2020 the conflict was blown open, culminating in the secretary's decision to step down at the end of the year.

“The motive is very simple: I don't share the club model and ideas held by the president [Victor Blanco],” he stated in an open letter. “That might sound strong to some, but it is not the case. I have nothing personal against Victor, who I respect and understand gives everything for the institution.

“I got involved three years ago to try and persuade and show a different path: that of professionalising a key area like the sporting division. I think it has been a success... but evidently I have been unconvincing. I feel I have not been listened to so I am stepping down so [Blanco] can pursue his ideas.” 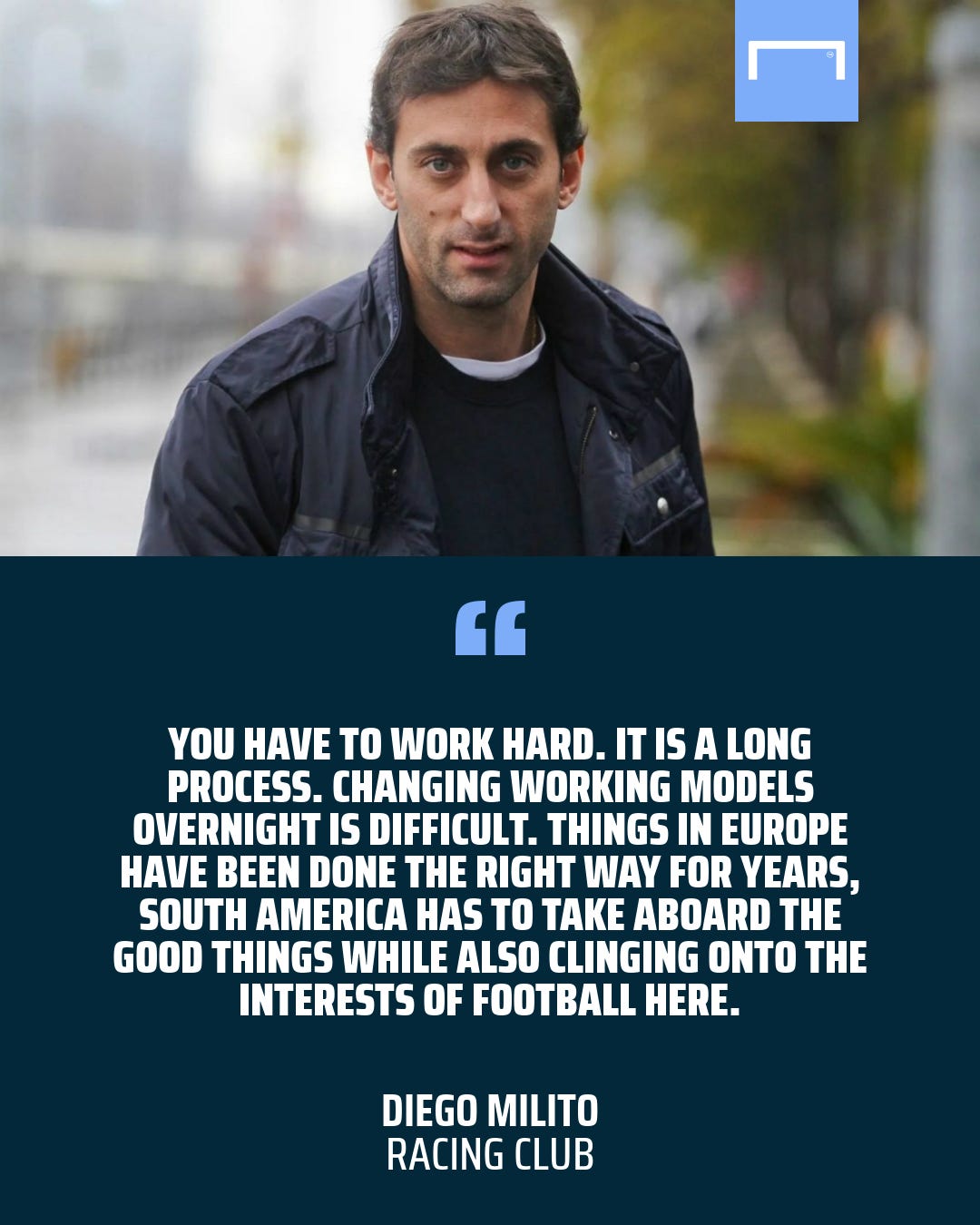 While the disputes between Milito and certain directors were well known, the abrupt manner of his resignation came as a surprise even to some of those closest to him.

For now the future of his department is unclear - whether it will continue without him or quietly be pushed out of operation by Blanco, who is expected to easily win Sunday's presidential elections even amid fan outrage over the treatment of their idol.

As an ardent Academia fan since childhood, Milito and all his collaborators continue to carry out their tasks, scouring South America for the next player who could make the difference in Avellaneda.

And, of course, there is the matter of the Copa, with the deciding match at the Bombonera coming on the brink of Christmas on December 23.

El Principe's impact since returning to Racing in 2018 has been largely in the background, with Milito keeping a low profile – as he usually did as a player off the pitch, too.

The Superliga win and this current Libertadores run represent his greatest legacy, having established his club consistently among the best in Argentina and South America.

That several of their rivals are also considering introducing their own equivalents of the system is also a sign of the efficiency of the club's work in this previously neglected area.

But if one moment could sum up what he has been trying to do under difficult circumstances these past three years, it would be one week ago at the Maracana.

Carlos Alcarez, 18 and fresh out of Tita, and 21-year-old Fabricio Dominguez, converted from playmaker to right-back after arriving from Uruguay, both netted in the penalty shoot-out against Flamengo to down the Rio aristocrats – two symbols of the Secretariat's objectives who, in the process, provided undisputable proof of Milito's importance working in the shadows.