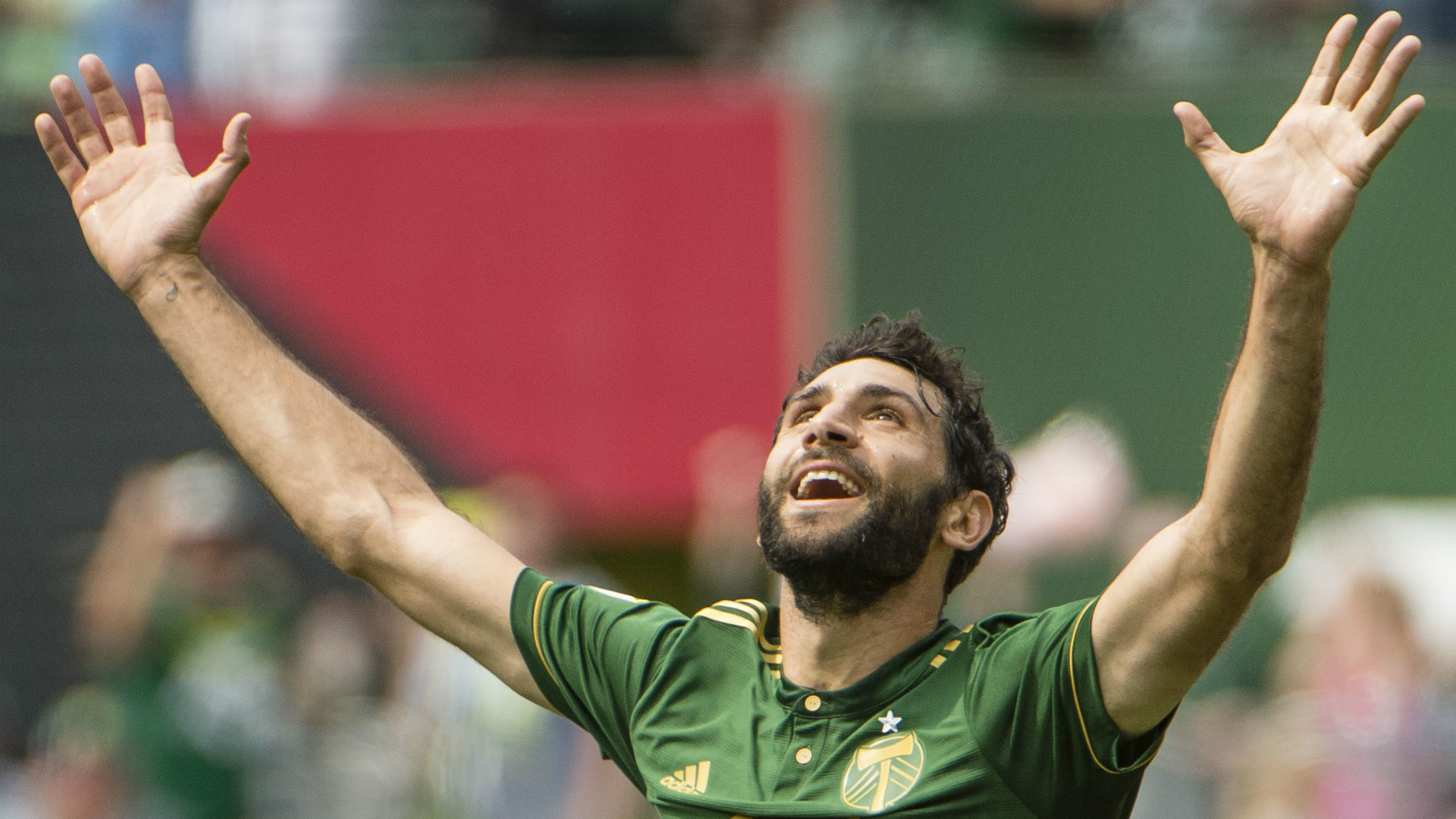 The Timbers playmaker is playing the best soccer of his career, and it has Portland leading the West and Valeri in the MLS MVP running

Major League Soccer's MVP race has felt like a foregone conclusion for some time. David Villa has been putting together a season even better than he had in 2016 when he won MVP honors, and with New York City FC looking like a serious title contender, it was tough to see anyone posing a real threat to Villa winning the award again.

A new challenger has emerged though, and he delivered his latest case for consideration on Villa's own home turf to boost his MVP candidacy.

Diego Valeri's winning goal in Portland's 1-0 victory over NYCFC on Saturday wasn't close to being the most impressive of the 17 he has scored this season, but that goal and his efforts in the win illustrated why he is has catapulted to the front of the line among serious challengers to Villa's MVP reign.

"He’s been in the league five years and he’s produced every single year, but this is his best year in his MLS career," Timbers coach Caleb Porter told Goal. "He’s always been considered a top player, but what he’s doing for our team, and what he’s doing in terms of production, we can’t lose sight of how hard he’s working. We’re trying to be a team that presses from the front and you can’t do that unless your 10 presses."

Valeri's first-half goal was him at his clinical best, but it was his defensive work in neutralizing Andrea Pirlo that was easy to miss, the kind of work he has been doing all season.

“Not only did he score, but he took away one of their best players in the buildup defensively, and that’s what makes him so valuable," Porter said. "He’s not a luxury guy that just walks around. He’s a guy that will work both sides of the ball. He’s a guy that can score. In our system, he’s the one who makes us go."

Valeri credits his ability to stay healthy for the past two seasons with helping him find a good rhythm and understanding of Portland's system. A torn ACL suffered at the end of the 2014 season set him back, though he recovered enough in 2015 to help the Timbers win the MLS Cup title.

"It helped me to go through last year and have a good year physically and not have any problems,” Valeri said. “It’s helped me getting to know my teammates, and understanding my role. With the quality this team has, it helps me play well.”

Being fully healthy has helped him step up the defensive side of his game, while the arrival of Sebastian Blanco and continued improvement of Darlington Nagbe have helped give Valeri the midfield support he needs to provide a consistent threat.

The result has been a career year that has seen Valeri score a career-high 17 goals, a total that currently tied for the second most in the league, and his goal against NYCFC marked his seventh straight match with a goal, tying the league record.

Valeri's recent goal streak has come just as the Timbers have been forced to be without star striker Fanendo Adi, who has missed five straight matches with a hamstring injury. During that stretch, the Timbers have compiled a 5-1-2 record that has helped them climb into first place in the fiercely-competitive Western Conference.

Is it enough to help Valeri mount a serious challenge to Villa in the MVP race? He isn't spending much time thinking about that, and says he's simply grateful to even be considered a candidate.

"It's an honor to even be mentioned in the conversation because there are so many great players at so many different positions in our league," Valeri said. "It motivates me to keep going and keep playing well. What matters most to me is the recognition of my teammates, and having them know that I give my all when I'm on the field."

The MVP award isn't the trophy Valeri is hoping to scoop up at the end of the year. It's a second MLS Cup that's on his mind, and Valeri believes the 2017 Timbers could be stronger than the 2015 version that win the MLS Cup.

"Yes, it can be better, because the quality is there," Valeri told Goal. "This team has personality, and can beat any opponent, even in tough places to play (like Yankee Stadium). We still have a long way to go to win a title, but this could be our best team."

If the Timbers are going to win a second title in three years, Valeri will need to continue playing at his best, and if he can maintain the impressive level he has found in recent months, the MVP race will very much be a two-horse race with Valeri a serious candidate to be the first midfielder to win the award since Dwayne DeRosario in 2011.

SIZING UP THE MVP FIELD

How does the MLS MVP race stack up as we head toward the final month of the season? Here are the best candidates:

Villa. The clear favorite, though his recent injury has opened the door a bit for other candidates. Enjoying his best season in MLS and will be tough to beat unless he completely cools off.

Valeri. The way he has helped carry the Timbers attack in Fanendo Adi's absence deserves more attention. The clear No. 2 right now.

Sebastian Giovinco. His candidacy suffers a bit because of how stacked Toronto FC is, and how many legitimate MVP-worthy seasons Giovinco's teammates are having (like Jozy Altidore and Victor Vazquez). That aside, Giovinco could push his way into the lead with a strong finish to the season.

Nemanja Nikolic. The Chicago Fire striker was right on Villa's tail this summer, but he's cooled off, as have the Fire. He did score in the Fire's draw against the New York Red Bulls, but he'll have to get hot again to have any chance.

Ignacio Piatti. A player who is often overlooked when discussing the league's elite. Montreal's struggles will keep him out of the top three.

Player of the Week: Altidore. The U.S. national team striker continued his outstanding season for TFC with a pair of goals to help move his team closer to the Supporters' Shield.

Team of the Week: Portland Timbers. Sure, NYCFC was missing some key players, but the Timbers still get credit for being just the second visiting team to win at Yankee Stadium this year.

Rookie of the Week: Jakob Nerwinski. The Vancouver Whitecaps fullback helped set up two of the Whitecaps goals, and helped neutralize Joao Plata to be this week's clear choice for top rookie.