Everything you need to know about English football's national stadium

The largest ground in the UK and the second largest in Europe, Wembley stadium was built for the big occasion.

Wembley has hosted countless memorable occasions, including the Champions League final between Manchester United and Barcelona in 2011 and the European Championship men's and women's finals in 2021 and 2022.

So if you are planning a visit to the home of the England men's and women's national teams, GOAL brings you everything you need to know.

Google maps: Further directions to the stadium can be found here

Wembley Stadium is located in the north-western region of London.

The stadium is best accessed via train: Wembley Park train station is a five-minute walk from the stadium and can be reached on the Jubilee and Metropolitan Underground lines.

Wembley Central train station, which is accessible via the Bakerloo line and the London Overground metro, is also a 10 to 15-minute walk from the stadium.

Another nearby access point is Wembley Stadium train station, which can be reached via the overground Chiltern Railways.

The stadium can be reached by car via the A406, which can be accessed from the M1. Once on the A406, road signs will direct you to the stadium.

To get to the stadium by car from central London, take the A404 Harrow road, which is accessible from the A40. When you reach Wembley Rail Station on Harrow Road, turn right onto Wembley Hill Road, and follow the road signs to ground.

When was Wembley built?

On May 19, 2007, Chelsea and Manchester United competed in the FA Cup final to mark Wembley Stadium's opening ceremony, in a match which saw the London club lift the trophy in a 1-0 win.

It wasn't the first game to be played at the new venue, however, with England U-21's fixture against Italy, that ended in a 3-3 draw, having that honour.

The old Wembley Stadium, originally built in 1923, was torn down in 2003, and construction on the brand new Wembley started on the same site.

The new Wembley Stadium was completed and prepared to open in 2007 after a number of delays and postponements, caused by unforeseen costs and construction complications.

Foster & Partners and Populous were the architecture firms who designed the new stadium, which is estimated to have cost a total of £757 million ($916m), or a staggering £1.27 billion ($1.53bn) in today's money.

The most recognisable feature of Wembley stadium is its grand 133-metre tall arch, which spans over 315 metres, making it the longest single span roof structure in the world.

Wembley Stadium also has a sliding roof located 52 metres above the pitch. The roof does not fully shut but it still manages to cover every seat in the stadium, which makes Wembley the largest fully covered stadium in the world. 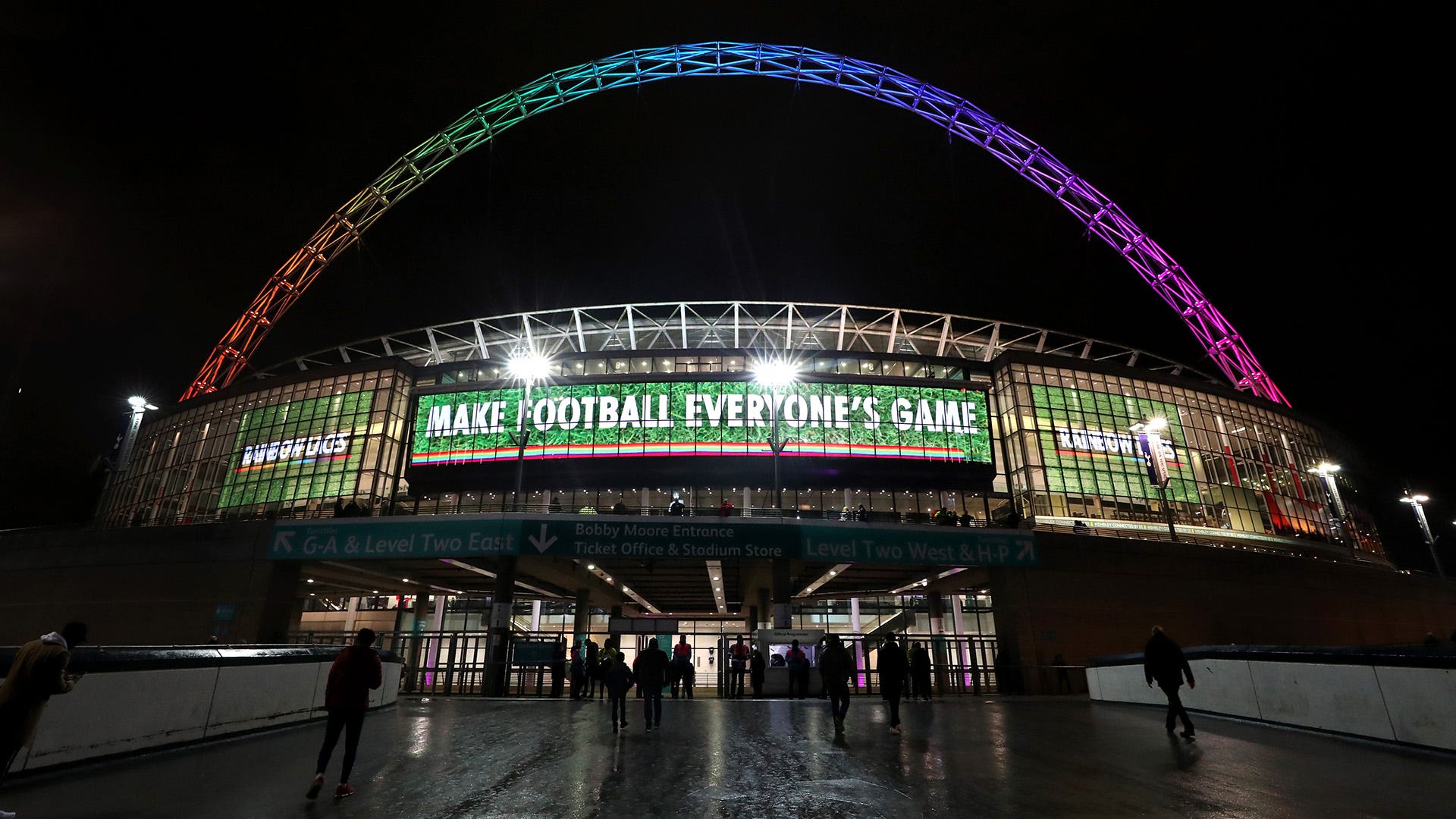 Wembley Stadium has a capacity of 90,000, which can be increased for particular events.

Which teams play at Wembley?

Wembley Stadium is not used on a regular basis by any club football side, but it is the home of England's men's and women's national football teams.

However, between 2017 and 2019, it did host all of Tottenham's home matches while they were constructing their new Tottenham Hotspur Stadium.

The Community Shield is also traditionally played at Wembley, although in 2022 Leicester City's King Power Stadium hosted Liverpool's win over Manchester City, due to the women's Euro 2022 final being played at Wembley the day after.

As Wembley isn’t in constant use for football purposes, it does accommodate a wide range of events, including concerts, boxing, rugby and American football.

The artists who have performed at Wembley Stadium include Coldplay, Madonna, Eminem, Ed Sheeran and One Direction. In 2017, Adele's concert attracted the stadium's highest-ever attendance of 98,000.

Since 1929, the Rugby League Challenge Cup Final had been held at the old Wembley Stadium, and in 2007, following Wembley's reconstruction, the cup final made its way back there.

The stadium has also played host to several Rugby Union events and, from 2009 to 2017, Saracens frequently played Aviva Premiership and Heineken Cup matches there.

The WBA and IBF super-middleweight championship rematch between Carl Froch and George Groves took place at Wembley Stadium on May 31, 2014, marking the venue's first boxing event.

Since then, the stadium has hosted a number of notable boxing events, including the heavyweight bout between Anthony Joshua and Wladimir Klitschko.

In April 2022, Tyson Fury remained undefeated as he was victorious over Dillian Whyte at Wembley Stadium, an event attended by 94,000 people, a record for boxing at the venue.

Wembley Stadium has a long history with American football, dating back to 1984.

Wembley has hosted several regular season NFL games since its renovation, a role it now shares with the Tottenham Hotspur Stadium.

What is Wembley’s seating plan?

A seating plan for Wembley is available on the official Wembley stadium website.

Can you book a Wembley tour?

Tours are available every day of the week between 10:00am and 4:00pm (UK time), though times may vary on event days.

Tickets cost £22 for adults and £15 for children; bookings and more details can be found on the official Wembley stadium website.