The Blancos boss left the returning Sergio Ramos exposed with his adapted 3-5-2 system, allowing Chelsea to ease into the European Cup final

Zinedine Zidane will take the blame. He often does for Real Madrid defeats, even when it is not his fault.

This time, though, it is.

The Blancos boss went with his gut over his head against Chelsea, bringing back captain Sergio Ramos for only his third game since January 9, and his first in nearly two months.

The 35-year-old was badly exposed throughout, as the home side overran their visitors from Spain, particularly during the second half.

Zidane also went with Eden Hazard, encouraged by the Belgian’s recent form, but he was unable to produce a shred of the magic he so easily conjured during his time at Chelsea.

The coach’s greatest crime, however, was his extremely unusual formation. Madrid have played 3-5-2 at times this season, but not like this.

On paper, Zidane picked a team that best fit a 4-3-3, but they lined up with Eder Militao, Ramos and Nacho at the back.

Instead of the usual set-up, though, Nacho and Militao pushed wide left and right respectively, leaving Ramos isolated in the middle.

The only help he had came from Casemiro or Luka Modric running back to help out, or his other alleged centre-back partners shuffling across. Was it any wonder that Chelsea tore Madrid’s defence to pieces, time and time again?

Only profligate finishing stopped Thomas Tuchel's side from turning their 2-0 win into a far more embarrassing scoreline for Zidane's charges. 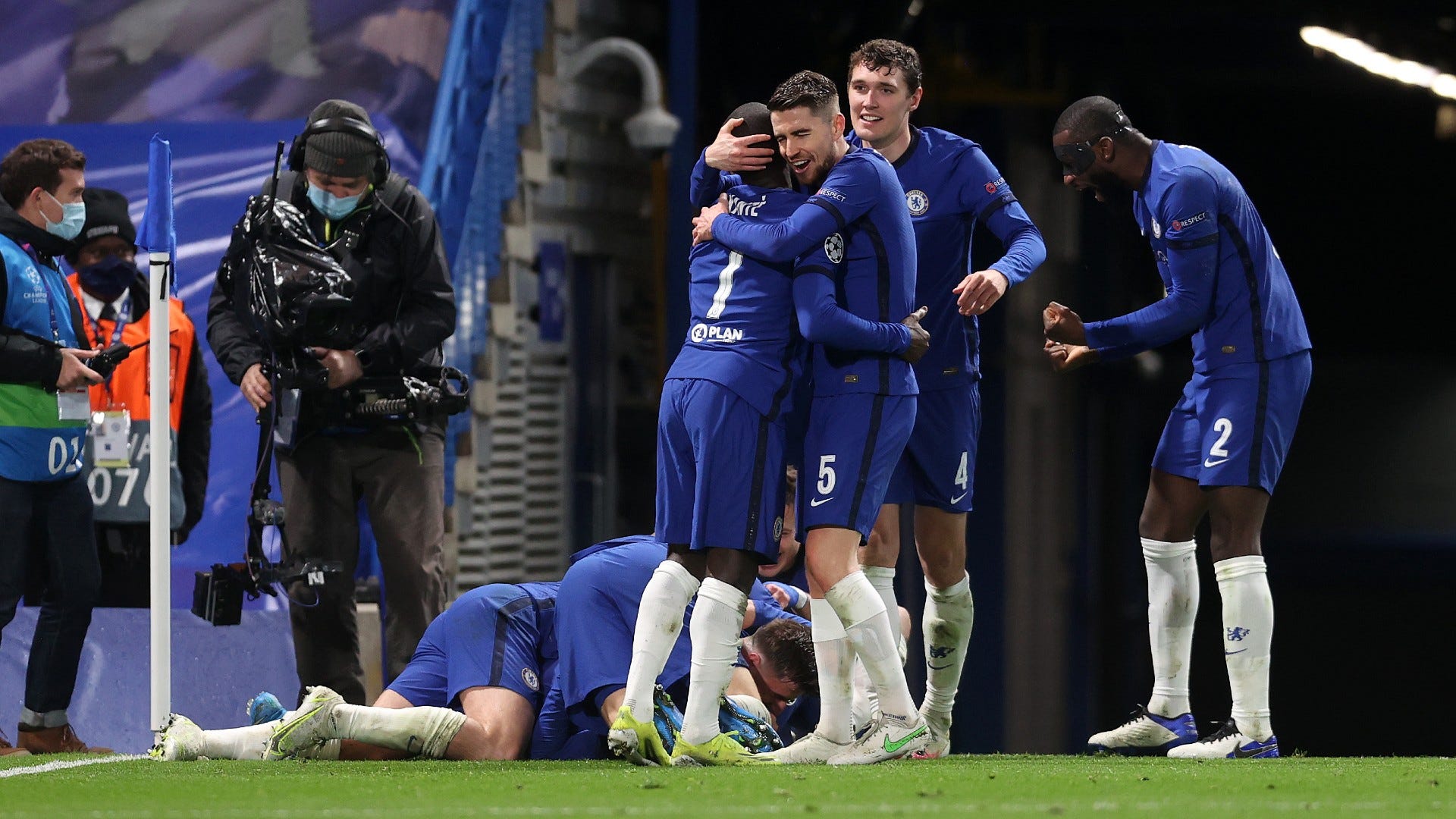 Madrid had more of the ball in the first half, but that was all they had to smile about, with Chelsea breaking the deadlock before the half hour mark.

Ramos was exposed for the goal, left on his backside by Timo Werner, and unable to catch up with the Germany international, who headed home after Kai Havertz's chip beat Thibaut Courtois and bounced back off the crossbar.

Werner had already seen another goal ruled out for offside, and even he could not fail to find the net from such close range, making up for the gilt-edged chance he missed in the Spanish capital eight days ago.

Karim Benzema twice came close for Madrid, forcing Edouard Mendy into two fine saves, but beyond the French outlier, Zidane’s side offered nothing.

Hazard was muzzled on his return to Stamford Bridge, although Jorginho was booked for clipping his heels after a clean turn early on, while Vinicius Junior was fouling Ben Chillwell more often than vice versa; not an ideal state of affairs for Madrid. 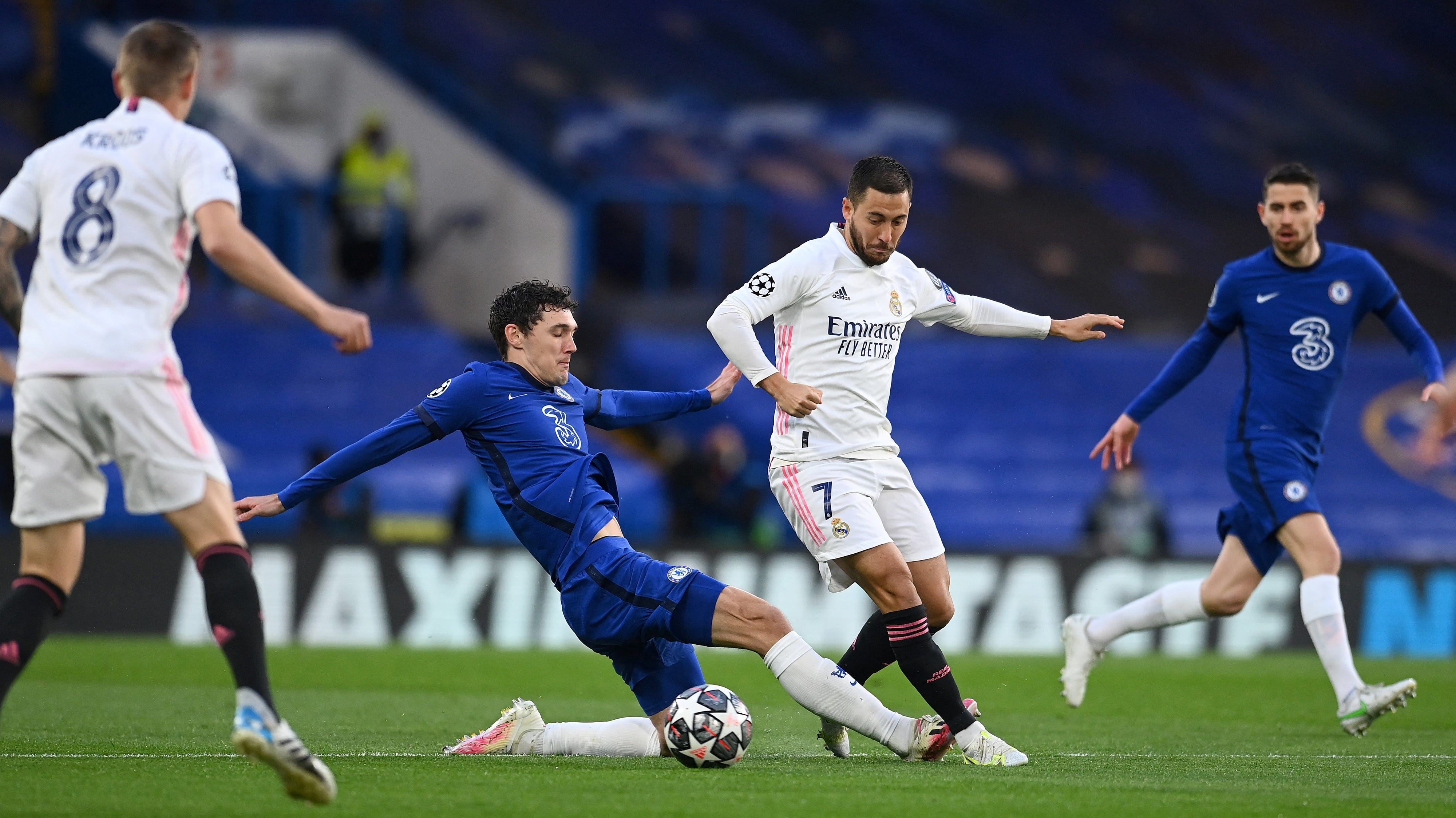 The Brazilian showed nothing of the magical display that saw him net twice against Liverpool in the previous round, and was brought off in the second half for Marco Asensio, while Ferland Mendy made way for Fede Valverde.

At 1-0 down, this was a chance for Zidane to change his system and find a breakthrough, but his moves were like for like. It was only when he took Casemiro off for Rodrygo late on that the coach tried to change the system, which clearly had not been working from the start.

By this time it was too late, the game’s dynamic could not be stopped and neither could N’Golo Kante.

The Chelsea midfielder, who helped set up the first goal, was vital in the second too, eventually dispatched by Mason Mount from close range.

The English midfielder made amends after missing a golden chance earlier, but most of Chelsea’s team were guilty of that, with Madrid ripped to shreds.

At times this looked more like a group-stage game, with Chelsea facing one of Europe’s minnows, not the record 13-time European Cup winners.

In the first leg, Madrid were lucky to escape with a 1-1 draw. Here, they can consider themselves fortunate that this did not finish, four, five or six nil.

Zidane's set-up was to blame, because even in their weakest performances of the season, nothing of this ilk had occurred.

Zidane has long warned that his team is running low on gas, and here Madrid reaped the fruits of that, perhaps, after an exhausting season.

But he did nothing to help them either on a chastening night for Florentino Perez and co.