Question marks regarding the 14-year-old's age remain prevalent, but his form at Borussia Dortmund suggests he has a supreme goalscoring talent

"God gave you a hard life because he knew from the beginning how strong you are."

When words such as those are posted on Instagram, nine times out of 10 they will be from someone with life experience, sharing their wisdom with the world. But this quote came from the account of a 14-year-old footballer. A 14-year-old footballer with over 317,000 followers on the social media site.

His name is Youssoufa Moukoko, and if his development continues, sooner or later he will be world football's next great goalscoring sensation.

Now plying his trade with Borussia Dortmund, Moukoko was born in the capital city of Cameroon, Yaounde, and grew up in the Muslim district of Briqueterie. Little is known of his early footballing experiences, but from the moment he joined the academy at St Pauli at the age of 10 having been brought to Germany by his father, Joseph, he was attracting attention.

"We had our weekly meeting with all the coaches and the Under-14 manager came in and said he had a player in the dressing room that he had never seen possess the same quality at that age, that he was unbelievable and we had to look at him," former St Pauli sporting director Thomas Meggle told reporters.

Moukoko's talent and physique belied his age and he was instantly promoted to the Under-15s side. By the end of the campaign, he had scored 23 goals in 13 games within the regional league in which they played. Manchester United were just one of the teams to show an interest in acquiring his services.

However, there was some scepticism as to whether Moukoko was truly the age his father – who had worked in Hamburg for 25 years before bringing his son to Europe from Africa – claimed he was.

"If you look at it physically and in terms of development, then of course the question of age comes up," Meggle explained. "We were presented with valid documents, which was crucial."

Even then debates over Moukoko's age intensified. Claims from his father that he had requested to register Youssoufa at the German consulate in Yaounde were denied by the foreign office, and only in 2016 did Moukoko acquire a German birth certificate. That same year he made the decision to join Dortmund. 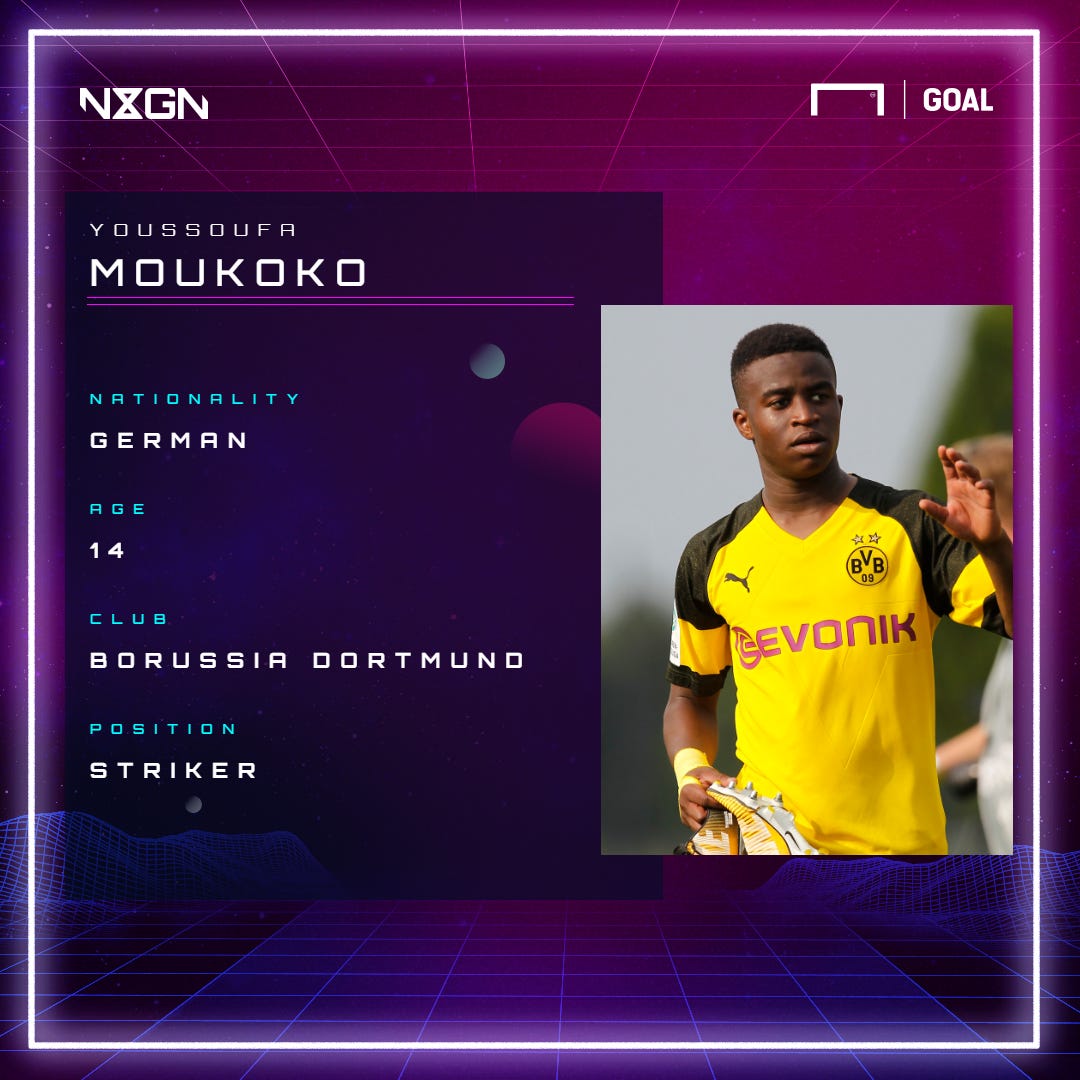 "Of course, we had tried everything to keep him, but with the big clubs we could not keep up with his talent," Meggle recalls. Regarded as one of the top clubs in Europe for nurturing young talent – and fans need only see the development of Goal's NxGn 2019 winner Jadon Sancho for proof of that – few questioned Moukoko's decision.

Queries over his age, however, continued.

"I do not think he is 12. My boys don't either," said Hombruch Under-17s coach Matthias Jabsen after a game during Moukoko's first season at Dortmund in which he scored twice.

"I do not understand why the player's father does not have an age test, which would help everyone."

Lars Ricken, Dortmund's academy coordinator, bit back: "He is 12. That is simply a fact; there is no doubt about it."

Despite all this back and forth, Moukoko was able to get his head down and deal in the currency which he knows best – scoring goals.

During the 2017-18 campaign he scored 40 goals in 28 games for Dortmund's Under-17s. This term he has upped his output to a record-breaking 48 goals, including two in their recent championship semi-final first leg victory over Wolfsburg, the second of which he celebrated by mimicking Cristiano Ronaldo's famous 'Siii' celebration. 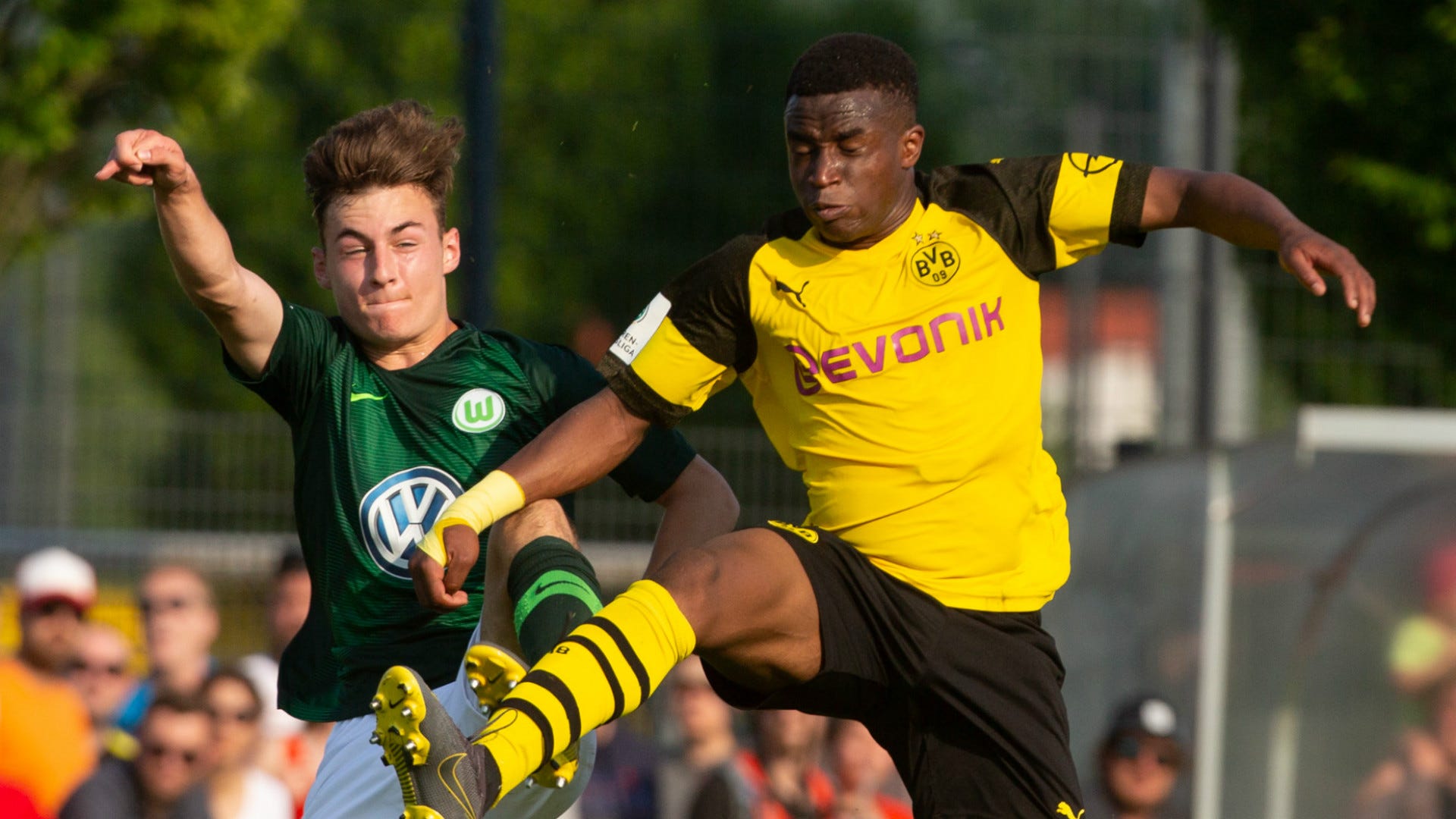 As such, Dortmund have already made the call to promote him to the club's Under-19s side next season.

"Youssoufa has now reached the age when he can play in the Under-19s," Ricken said in a recent interview with Bild. "We see this age group for him as the right year, which corresponds to his performance."

Though ready for the challenge, Moukoko himself has already moved to temper expectations. "I do not hope that people think that I will score 46 goals again in the Under-19s", he was quoted as saying in Ruhr Nachrichten. "I know the guys, but unfortunately I do not have the power they have."

While Moukoko may doubt his own physical power, the marketing power surrounding such a prodigious talent has not been lost on those that hand out the contracts at Nike.

The 14-year-old signed a deal with the sporting goods manufacturer in April that is worth a reported €1 million, though that could rise to €10m based on performance at both club and international level.

Such a deal has seen some hark back to a previous occasion when Nike put their money where their mouth is to back a supremely talented teenage footballer.

Back in 2003, a then 13-year-old Freddy Adu was the talk of the footballing world. Nicknamed the "US Pele", it was presumed that he was a sure bet to become the first truly global soccer superstar to emerge from the United States.

"Everything that I’ve been through and everything that hurt my career, I brought it on myself because I didn’t dedicate enough time to it," he told Goal in an exclusive interview in 2016.

Whether Moukoko realises it or not, he is living proof of the lessons learned from the Adu affair. Rarely placed in front of the media or within advertisements, the teen even missed matches with Germany's youth sides so as to concentrate on his studies at school.

That is not to say he will definitely make the grade at the highest level, but he is doing all he can to give himself the best opportunity.

If he does, then the world best watch out for Youssoufa Moukoko.