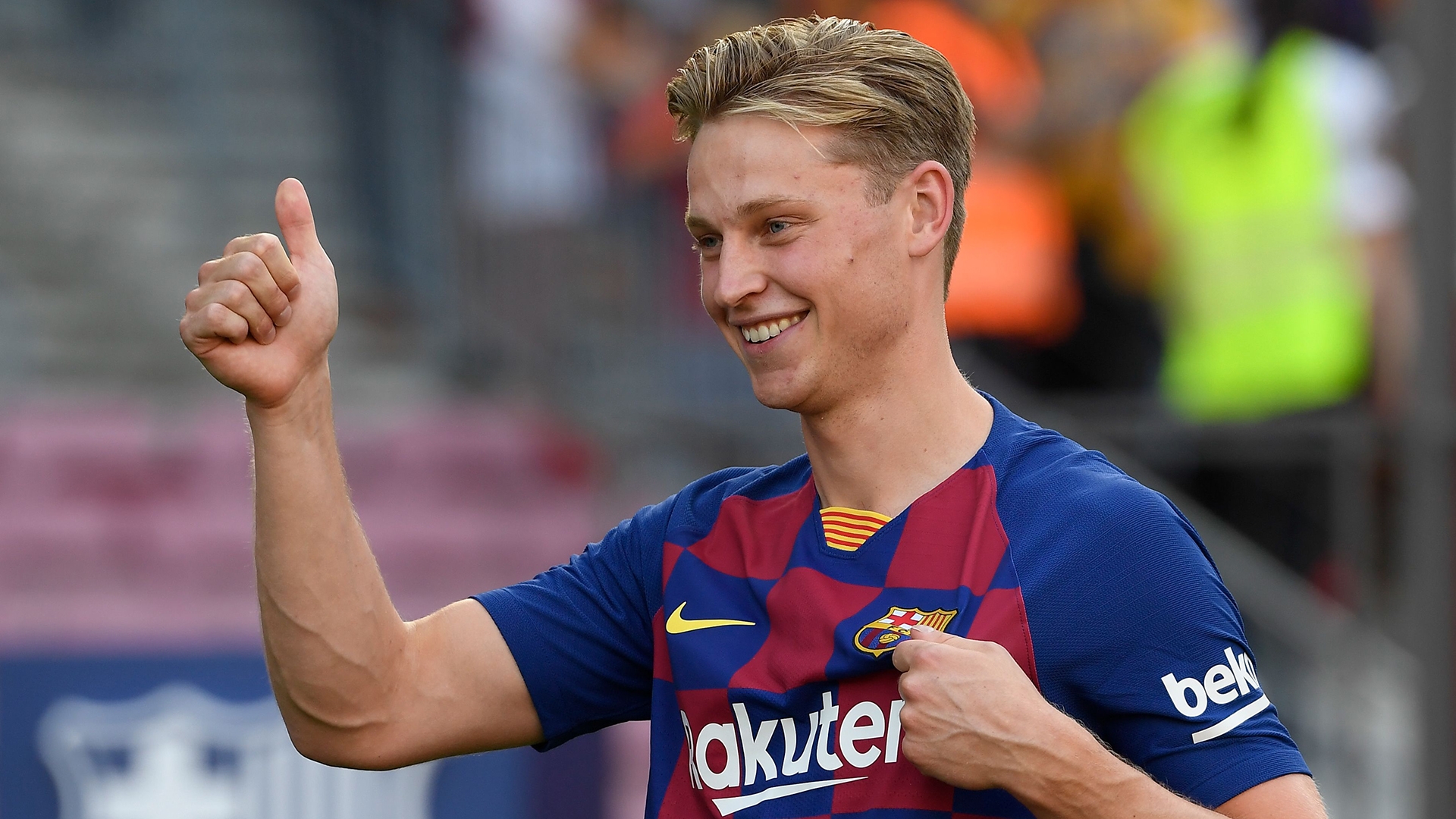 The Dutchman is preparing for his first Clasico, at Camp Nou on Wednesday, having already run rings about los Blancos with Ajax last season

Real Madrid spent well over 10 years chasing Xavi Hernandez and Andres Iniesta. On Wednesday, they go face to face with the new midfield maestro who could torment them for the next decade.

Frenkie de Jong is preparing for his first Clasico with Barcelona and it feels like the moment he has been building towards for years, having received his football education in his native Netherlands, first at Willem II, and then Ajax, a club synonymous with the Blaugrana because of their shared histories and footballing philosophies.

Madrid already know De Jong well, of course. The Dutchman played a pivotal role as Ajax dumped the Blancos out of the Champions League last 16 in March, ending the Spanish side's run of three successive titles.

De Jong's summer move to Barcelona had been announced in January, so the Catalans celebrated Madrid's embarrassing exit at the Santiago Bernabeu even more joyfully than usual.

One phrase came up time and time again in reference to De Jong: 'Barcelona DNA'. Xavi even said it himself last year, while pushing for the Catalans to not only sign De Jong but also his former Ajax team-mate Matthijs de Ligt.

“They don't lose the ball, they bring it out well," the World Cup winner said. "They already have the Barcelona DNA coming from Ajax, which has always been a good school for us. And they're young."

Barca may have missed out on De Ligt, who instead joined Juventus, but De Jong is already proving Xavi right just a few months into his Camp Nou career.

Even when Barcelona aren’t at their best and De Jong isn’t at his – which is very rare indeed – the ball still runs through him. He is already the core of the team.

Eibar fans even gave De Jong an ovation for his display at Ipurua in October. "It was a great feeling. I really appreciate it,” he said after his team’s 3-0 triumph in the Basque Country.

When De Jong arrived, some wondered if he would get enough game time in a packed midfield to keep progressing. Now the question is – which two players will coach Ernesto Valverde pick alongside him?

On Wednesday, it will probably be Sergio Busquets and Ivan Rakitic, with Arthur injured and Arturo Vidal inconsistent.

De Jong is the only one of the five whose form hasn’t been questioned this season. Sergi Roberto was the sixth but although Valverde expected the Catalan to compete for a midfield place, there is no room at the inn and he may start the Clasico at right-back.

Valverde has split De Jong’s time between playing as the holding midfielder and as one of the two interiors further forward.

Although the long-term idea was for De Jong to replace Busquets as the deepest of the midfielders, he seems to be playing better further forward, and having more of an expansive role makes sense.

After all, behind Lionel Messi, De Jong has been Barcelona’s best player this season and he is looking forward to proving that in the biggest fixture in club football.

“I’m really excited as it will be my first Clasico. I’ve followed all the others on television and the one I enjoyed the most was the 5-0 at the Camp Nou (in 2010),” De Jong enthused.

That’s less of a dig at Madrid than a salute to Pep Guardiola’s Barcelona, and the midfield trio of Busquets, Xavi and Iniesta.

While David Villa and Messi took much of the plaudits that day, it was the passing which suffocated Jose Mourinho’s bewildered Madrid – and that's De Jong’s forte.

He is the club’s best hope of maintaining their identity going forward, when Messi, Busquets, Pique & Co. have gone. De Jong wants the ball, all the time, and he wants to use it correctly too.

If you watch him play you will see how often he turns his head, before he even has it, so he’s ultra-aware of where his team-mates are positioned, where they are running, where he should pass.

That De Jong has seen the Clasico from 2010, when he was a 13-year-old boy, should not be surprising, because his favourite pastime is watching football.

He simply can’t get enough, going home after training and viewing games from across Europe’s leagues.

De Jong is keen. Very keen. So keen, in fact, that he has been warned off trying to train too much by the physios and coaches.

As good as De Jong has been so far, the scary thing is that he has a long way further to go.

A better coach than Valverde could get more out of him. Certainly, he has made little attempt to hide his desire to become an even greater offensive threat, given his attacking instincts are curbed while playing in the Busquets role.

The more strings De Jong adds to his bow, the more complete he will be – not that there are many more well-rounded midfielders in Europe at present anyway.

He should show that at Camp Nou. Indeed, in years to come, another fresh-faced Barcelona recruit might look back on this Clasico as their favourite because of the way in which they were bewitched by a midfield maestro.