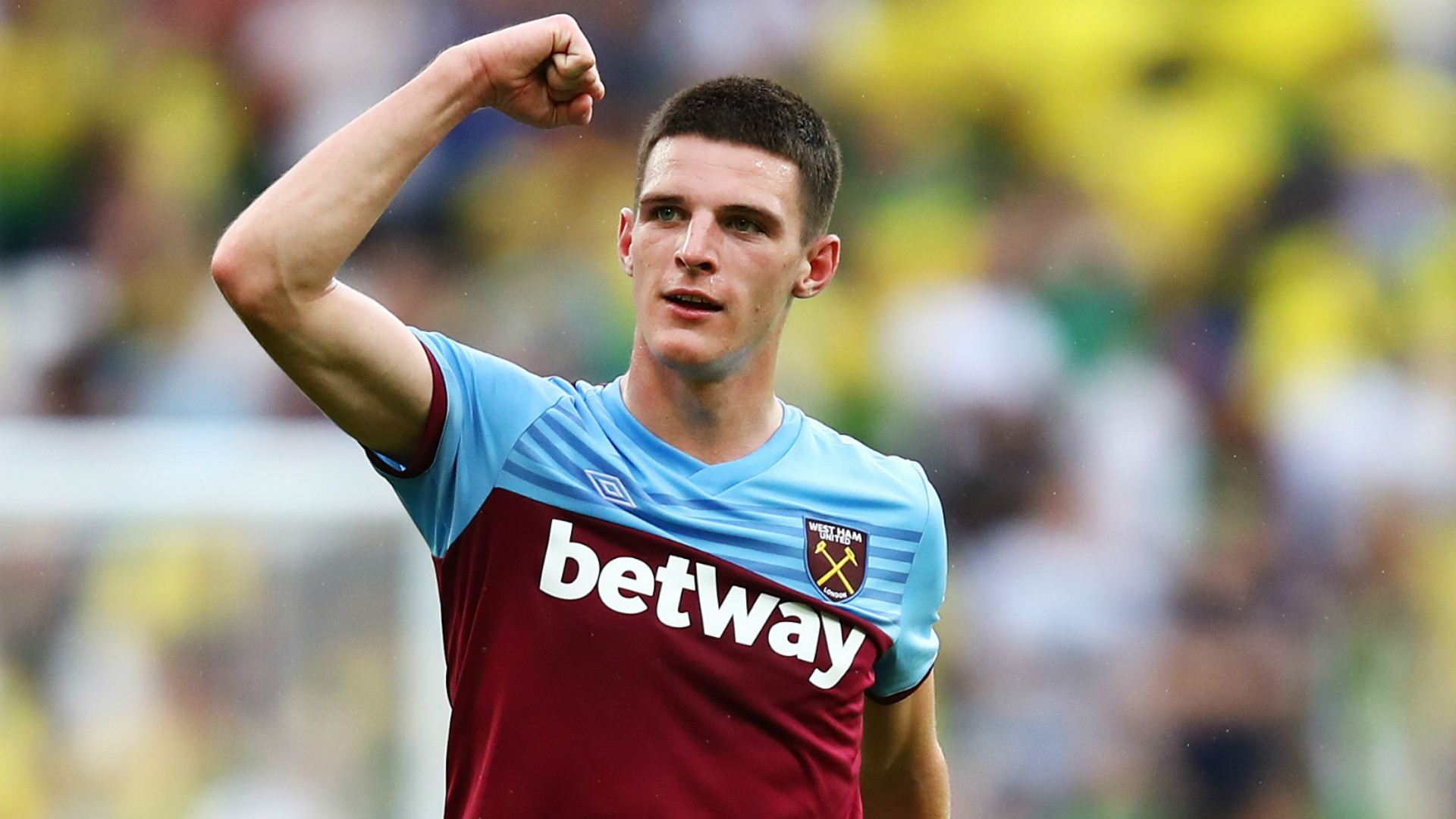 The Blues are interested in re-signing the England international, whom they let go at 14 and then watched flourish at West Ham

Chelsea are interested in re-signing Declan Rice from West Ham but does that necessarily mean that releasing him in 2013 was a mistake?

Opinion is divided down at Cobham, where the Blues' academy is currently scouting, coaching and producing more talent than at any other club in English football.

At 14, Rice was not deemed good enough to be kept on and was, thus, released. He then enjoyed a successful trial and West Ham and never looked back, progressing through the youth-team ranks before breaking into the senior side at the tail end of the 2016-17 season.

Rice has since become a regular in the first team and represented England at international level, having previously lined out for Republic of Ireland.

At 21, he is now one of the most coveted young midfielders in the Premier League and Chelsea would have to pay an enormous fee to bring him back to Stamford Bridge.

So, did the Blues err badly in letting Rice go?

Former Chelsea academy coach Michael Beale knew Rice well from his time at the club but he had departed for a more senior role at Liverpool when he learned of the London native's release.

"I was disappointed," he told Goal. "In Declan’s case, he needed time. He had just gone through a growth spurt and look at him now.

"He is a big strapping lad. Pace has never been Declan’s thing but personality, character and work ethic have. He is technically good and committed.

"He was a small lad who had a growth spurt and he was in a group with big athletes. It could look unforgiving for him. But I never saw Declan struggling, in my personal opinion.

"Maybe that was because I was close to him and wanted him to do well. I thought then he just needed time to grow.

"But maybe he needed to leave Chelsea to go to another club with a clearer pathway to the first team, as that's exactly what he found at West Ham."

There's clearly more to it than that, though.

Just like Rice, Chris Mepham was released by Chelsea at the age of 14. The centre-back was then rejected by Watford and QPR before kickstarting his fledgling career at Brentford before being snapped up by Bournemouth last year.

As such, Mepham firmly believes that Rice's resurgence was as much about mental strength as physical growth.

"I knew Declan when he got let go and went to West Ham," the 22-year-old Wales international told Goal. "He has really flourished there. He gets a lot of attraction from the big teams and deservedly so.

"Because all of that is testament to his character. It says a lot about a person how they bounce back from being told that they are not good enough."

Indeed, Beale, who has played a part in the development of Trent Alexander-Arnold , Ruben Loftus-Cheek and Eder Militao, believes that Rice was actually spurred on by his rejection at Chelsea.

"Disappointment can sometimes help a young person," he added. "It can refocus you. Declan is a great lad and being dropped could well have been the making of him."

Having Mason Mount as a best friend also helped. As Rice told Goal after watching the Chelsea attacking midfielder make his England debut in a 4-0 win over Bulgaria in September of last year, the pair don't just get on well, they also push one another to improve as players.

"Since we were young, in training and games, we have always been egging each other on to get better," Rice explained. "We have always had a winning mentality. We always want to do well. We went our separate ways but always stayed in contact, dropped each other a message now and then.

"It was special [to see him debut]. From the moment he was lined up to come on, I had a smile on my face. When he ran out and the reception he got, it was really special. I don’t know how he was feeling but I felt like a proud best friend. It was really special for him and his family."

The pair could both now feature in the same England midfield for the next decade but could they once again become team-mates at Chelsea? Mount would certainly like to be reunited with Rice.

"He got released at 14, so that was a big blow for me because he was a close friend of mine," the Portsmouth native told Goal. "But we have always kept in contact now and speak to each other almost every day.

"It's great when you see how he is doing, how he has bounced back from being released. I am so proud of him.

"We would always speak to each other about maybe playing with each other again. He was playing for Ireland initially, so it didn’t really look like a possibility, but now he has chosen to play for England and I was buzzing with his decision.

"Now, we will see what happens in the future if we can play with each other again..."

However, re-signing Rice would have been difficult anyway, given the midfielder's value to West Ham. However, all transfer plans have been thrown into disarray by the Covid-19 pandemic, with clubs now facing up to the greatest financial crisis in football history.

With activity in the transfer market likely to drop significantly this summer, West Ham will be now even more reluctant to let go of a player that they would find it difficult to replace.

Rice also still has four years left on his current contract but Hammers legend Tony Cottee is worried that his former club will struggle to hold on to their most prized asset in the long term.

"In terms of where he will be in two or three seasons, a lot depends on West Ham and where they go," the retired striker told Goal. "They need stability. For any player in the Premier League, it is not about the money as such.

"Players get good money whether they are at West Ham, Chelsea or Barcelona nowadays. It comes down to two things; can West Ham get into Europe or win cups? It is getting harder and harder even to win the cups.

"Realistically, they can’t win the league or get in the Champions League at the moment. It will come down to a personal decision for Dec: does he want to win cups or play in Europe?

"I got frustrated at West Ham because I got frustrated after the 1986 season [where West Ham were close to winning the league]. I left to try and chase glory and European football with Everton. Ultimately, I didn’t succeed. I didn’t achieve what I wanted to but you reach that crossroads.

"No West Ham fan wants him to leave and I don’t want him to leave. But your career does go so quickly. You have only 15 years to do what you can."

Whatever he decides to do, Rice clearly has a bright future ahead of him. Being released by Chelsea may well have been the making of him, as Beale suggests.

So, did the Blues make the right call? It's impossible to say for sure, which is why they're still divided over the decision to let him go at Cobham.

There is one thing that they agree on, though: Rice is now more than good enough for Chelsea.