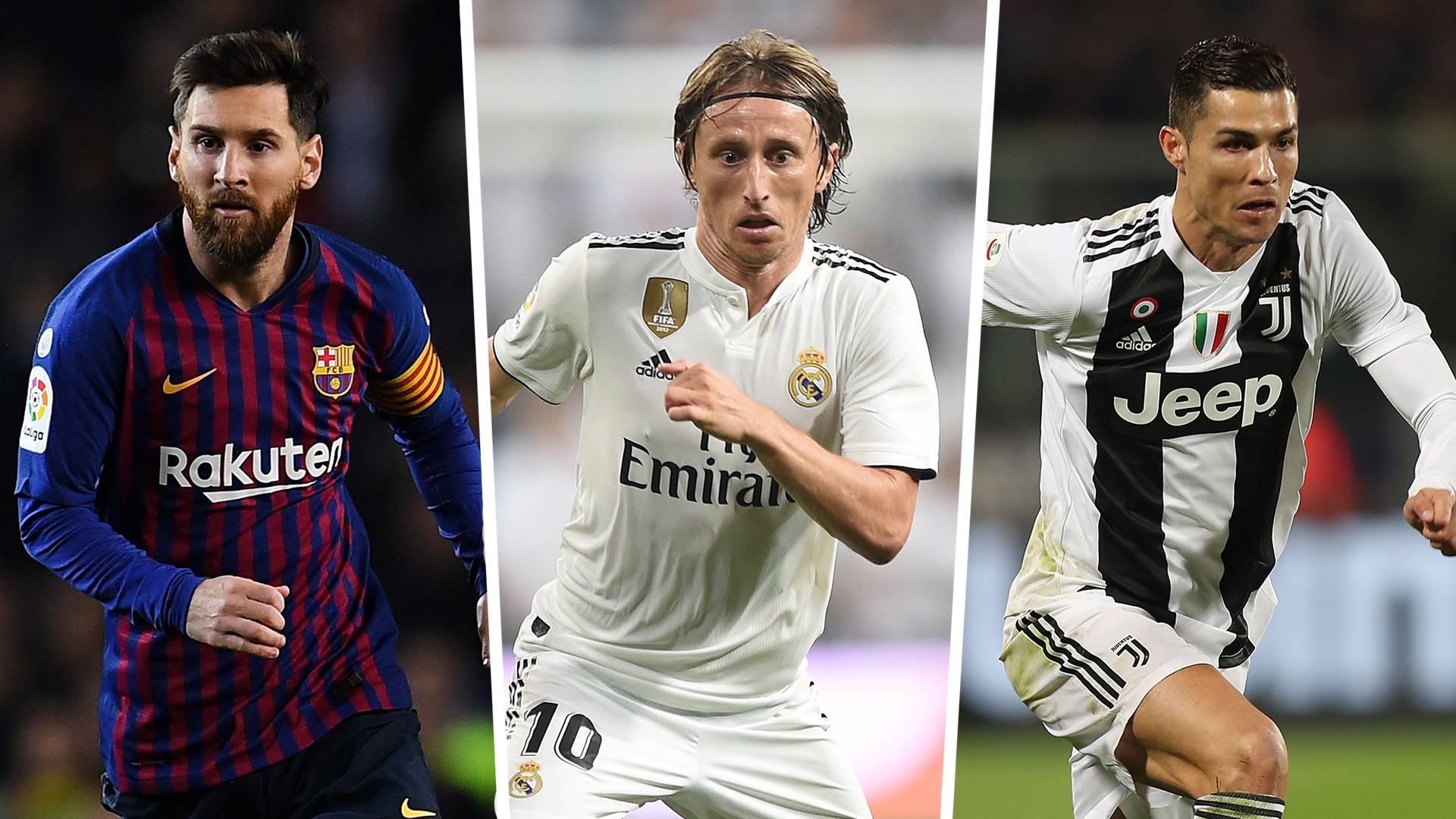 Lionel Messi and Cristiano Ronaldo both have five Ballons d'Or apiece, so who could win the award this year to break up their decade-long dominance?

The Ballon d'Or 2018 will mark precisely 10 years since Cristiano Ronaldo first scooped up the award in 2008, leading to an entire decade in which he and Lionel Messi dominated the honour roll as both winners and runners-up.

Both superstars now have five (five!) Ballons d'Or apiece, but with both of them underperforming at the World Cup with their respective nations, it may be time for a new era where a new player finally usurps them to the biggest individual honour in football.

Luka Modric being crowned the FIFA Best Men's Player of the Year  has significantly changed the football landscape, becoming the first non-Messi or Ronaldo player since Kaka in 2007 to lift such an award.

With the nominees announced  ahead of the winner reveal in Paris on December 3,  Goal takes a look at the favourites to win the trophy as well as the underdogs to claim the prize.

Favourites to win the 2018 Ballon d'Or

In the wake of the 2018 World Cup, which saw a number of favourites exit prematurely and plenty of individual talents taking centre-stage, the way may be paved for a new player to break up the long-standing Ronaldo-Messi duopoly, especially since neither player reached the levels that were expected of them in Russia.

For a World Cup that was hyped up as a tournament for the two forwards to shine in, both their respective nations were disappointingly eliminated in the last 16 stage.

Croatia captain  Modric  now appears to be a clear frontrunner to win the award (with odds at 1/10 according to Oddschecker at the time of writing ) and won the World Cup Golden Ball award – the prize awarded to the tournament's best-performing player – after guiding his side to the final in Moscow.

In doing so, he firmly established himself as one of the best midfielders in the world (if not the best) after guiding Croatia to the World Cup final and playing a pivotal part as Real Madrid won a third successive Champions League trophy, not to mention clinching the FIFA Best Award ahead of perennial duality Messi and Ronaldo.

Ronaldo  is also an outside favourite (at 13/2 ) to win the award despite Portugal's early World Cup departure at the hands of Uruguay, but his move to Juventus has signalled his intent to still establish himself as the 'GOAT' (greatest of all-time) ahead of Messi – eager to win yet another major European title after conquering England and Spain with Manchester United and Real Madrid respectively.

The Portuguese superstar's start to the current season hasn't been quite so stellar, however, only scoring his first Juventus goals in his fourth Serie A appearance and receiving a red card against Valencia in the Champions League, but he has picked up the pace.

Messi missed the opportunity to finally lift an international honour with Argentina in what could potentially have been his last and best chance to win the World Cup (with odds of winning the Ballon d'Or available at 25/1 ), while Ronaldo also failed to capitalise on Portugal's Euro 2016 success. Both are still perennially in the running to win the Ballon d'Or, though their chances have undoubtedly dipped.

The Argentine was actually  snubbed from the final three-man shortlist for the FIFA Best Men's Player award , though was included in the FIFA FIFPro XI squad.

Stars may have been aligned and peace in football may have been achieved as Ronaldo and Messi both have five a piece – a perfect whole number – and it may be time for a new player to win the coveted award. This summer's World Cup may be the turning point and what ultimately edges a player out from the shadows of the pair.

After incredible performances in Russia 2018, the likes of Kylian Mbappe and Antoine Griezmann are also among the favourites to win the Ballon d'Or.

Mbappe is another star who is in contention to win the Ballon d'Or after playing a pivotal role in France's World Cup success off the back of an excellent season at Paris Saint-Germain (with odds of 5/1 ) and being named as part of the FIFA FIFPro World XI.

The 19-year-old superstar – who wasn't even alive when Les Bleus lifted their first World Cup in 1998 – won the Young Player Award in Russia after scoring four goals (including one in the final). His strike against Croatia made him just the second teenager in history to have scored in a World Cup final after Pele in 1958.

Griezmann  ( 7/2 ) is another player who is a favourite to win the Ballon d'Or no doubt buoyed by his nation's World Cup win as well as having scooped up the Man of the Match award in the final game of the tournament.

The Atletico Madrid forward finished third in the race for the Ballon d'Or in 2016 and could contend for a better finish this year. The France international scored four goals and provided two assists in Russia and was one of his country's best-performing players, two years on from winning the Golden Boot in the 2016 Euros.

Raphael Varane has emerged as a frontrunner following the release of the 30-man longlist, and is priced at 5/1 to win the award. He is one of eight Real Madrid players in the running to win the honour, and the La Liga side is the best-represented club with the most nominees this year. Should Varane win, he would be the first defender since Fabio Cannavaro in 2006 to win the award.

Oddly enough, Brazil and Paris Saint-Germain star Neymar is not a favourite to win the Ballon d'Or this year, or even high-ranking as an outsider to lift the award after an abysmal World Cup where he failed to live up to expectations .

Russia 2018 was the chance for Neymar to announce himself as a contender to outshine both Ronaldo and Messi. But Brazil's underwhelming showing and his own infamous on-pitch antics – he proved to be one of the most unpopular figures to have emerged from the World Cup after his numerous playacting displays in front of the referee – has damaged his reputation and chances of winning the Ballon d'Or after finishing third in both 2015 and 2017.

Tottenham and England striker Kane has emerged as an outside contender for the Ballon d'Or, behind the likes of Messi and Mbappe, after he won the Golden Boot in Russia after scoring six goals in the tournament. He is unlikely to win the award, however, considering that three of his World Cup goals were scored through penalties, two netted from a corner and his only goal from play a tap-in he was not aware of. Michael Owen in 2001 was the last English player to win the award.

Chelsea star Eden Hazard  emerged as a contender to put pressure on the competition and is also priced at 66/1 to win the award following his impressive season for both club and country.

Salah is another name who is an outside favourite to win the award, though his chances could have been higher had he managed to win the Champions League with Liverpool. The 25-year-old broke several records in his debut season at Anfield and also outscored both Fernando Torres and Luis Suarez at Liverpool, scoring 32 goals.

Egypt's inability to win a game in Russia may also have affected his chances, though he was injured for most of the tournament and will regret not being able to have made as big an impact as he wanted.

He did win the Premier League Golden Boot award with Liverpool, and came second in the European Golden Shoe award with 32 goals (Messi scooped the award with 34 goals). Though he won the Puskas Award at FIFA's Best Ceremony  for his volley against Everton, he was curiously omitted from the FIFA FIFPro Team of the Year in favour of Mbappe, Ronaldo and Messi.

Salah also managed to edge out Manchester City star De Bruyne to the Football Writers and Players' Player of the Year Awards, despite the Belgian international having a sensational season under Pep Guardiola and winning the title.

The Belgium international is another outside favourite to win the Ballon d'Or at odds of 80/1 to win, as he was an instrumental factor in Belgium's third-place World Cup finish.

Neymar has finished in third place twice, most recently in 2017, while Antoine Griezmann finished third in 2016.