It's January 19, 2011 and the press room located at the heart of Catania's Stadio Ciabli is overflowing with journalists, while the streets outside are packed with jubilant fans. There are Rossazzurri scarves, flags and banners everywhere.

This is not a title triumph, though, or even a promotion party. This is simply Catania welcoming its new coach, Diego Pablo Simeone.

It wasn't even a case of love at first sight; it was love at first announcement. The Argentine's appointment had only been confirmed the night before but nobody had seen it coming. It immediately sent the supporters of the struggling Sicilian club into raptures; their initial disbelief having quickly made way for total adoration.

Simeone had been one of the most dominant midfielders of his era, winning league titles in both Spain and Italy, with Atletico Madrid and Lazio, as well as two Copa America trophies with Argentina.

He wasn't just a winner either. He was renowned for his intensity and passion. Sicilians were always going to welcome him with open arms. Simeone was nonetheless taken aback by the warmth with which he was received.

He had already won two titles in his homeland - the Argentine Primera Division Apertura with Estudiantes and the Clausura with River Plate - but he was unproven as a coach in Europe.

In addition, he was taking over a side battling relegation. Marco Giampaolo had been fired after a draw at home to Chievo, with Catania 16th in the Serie A standings.

"The results hadn't arrived under Giampaolo," former Catania midfielder Ezequiel Carboni tells Goal. "From the moment Simeone arrived, he had the necessary personality to manage a group that was full of Italians and Argentines."

Gonzalo Bergessio also arrived during the January transfer window, along with the Italo-Argentine Ezequiel Schelotto.

The selection of Simeone, thus, made perfect sense, given the Buenos Aires native had spent eight years of his playing career plying his trade in Italy, with Pisa, Inter and Lazio. He immediately united the dressing room, even if it got a little confusing at times.

"I remember Simeone's first day," says Ricchiuti. "He was speaking to me in Italian. I replied, 'Coach, I'm Argentine like you!'" 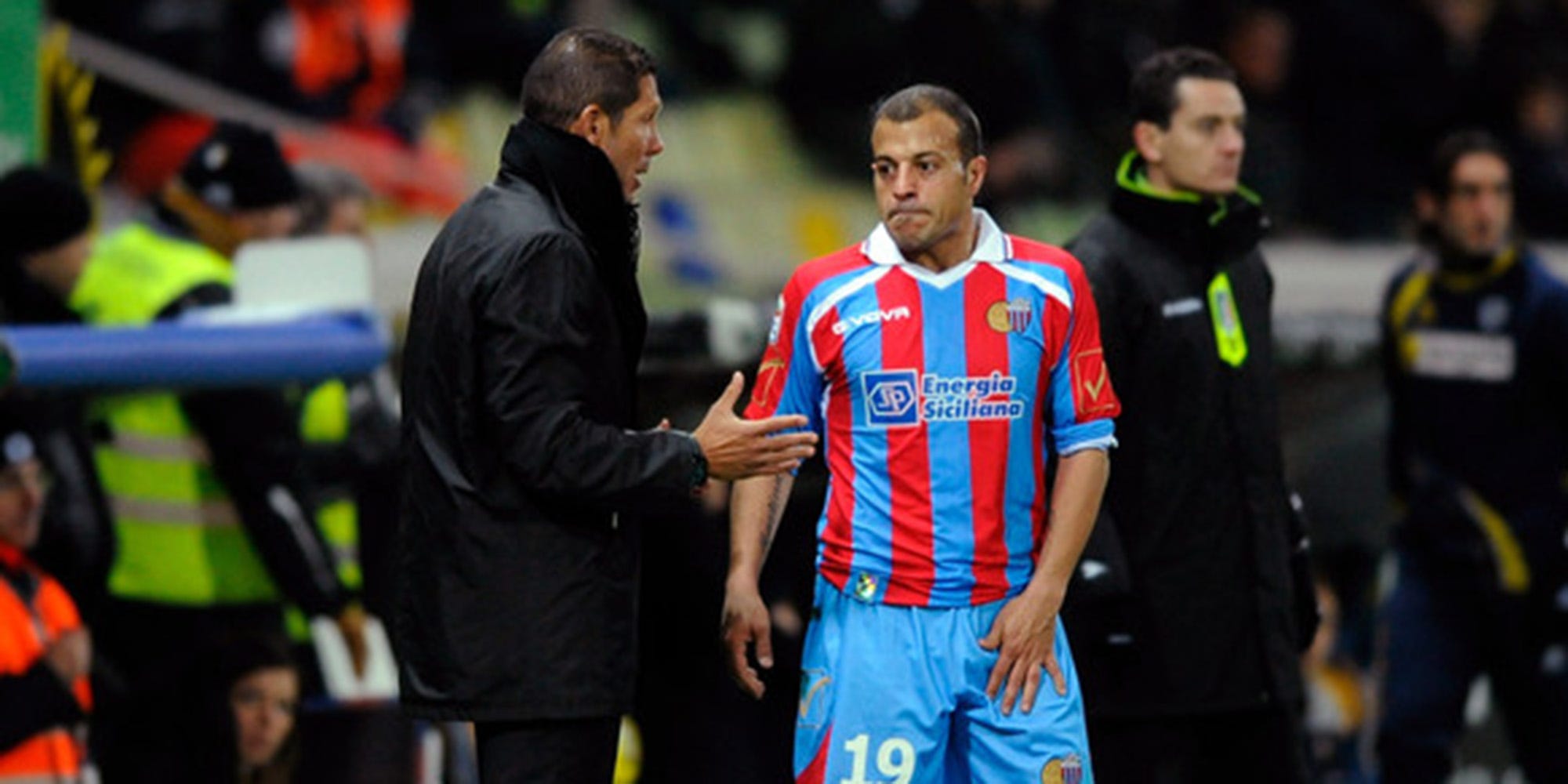 Things didn't start well on the field either. Catania lost their first two games under Simeone, to Parma and AC Milan. They picked up a point from a relegation battle with Cesena at the Dino Manuzzi on February 2 but a 1-0 loss at Bologna four days later set off the alarm bells.

Catania were now just a point above 18th-placed Brescia and playing without any consistency or clarity. Papu Gomez's role had yet to be defined, Takayuki Morimoto appeared to have no idea what Simeone was asking of him and Ledesma was struggling to offer anything in midfield.

Amid all of this uncertainty and concern, Catania hosted Lecce on February 13. Despite opening the scoring through Silvestre just before the break, the Sicilians found themselves 2-1 down by the hour mark.

However, then came the turning point of the game, season and arguably Simeone's coaching career, with substitute Francesco Lodi converting two penalties in the final 10 minutes to earn Catania a crucial 3-2 win.

Catania were also aided by an enforced change of formation that day.

An injury to Ciro Capuano prompted Simeone to embrace what he called a "three-and-a-half-man defence", with Schelotto dropping in at right-back whenever Spolli, Silvestre and Christian Terlizzi were under attack. It was a system rarely seen before but one employed by Simeone at regular intervals during the remainder of the 2010-11 season.

However, Simeone also pulled off two masterstrokes all on his own. Lodi had arrived as a trequartista (No.10) but was converted into a regista (deep-lying playmaker), while Papu was moved onto the wing in a 4-3-3 formation disguised as a 4-2-3-1.

"Simeone taught me a lot," Gomez says. "At Catania, he decided to make me play out wide, even though I was slow to get back.

"I used to tell him that it wore me out defending, but he told me that in Europe, unlike in Argentina, I would only have been able to play in that role.

Thanks to Simeone's changes, Catania became an effective unit, at least at home, where they won six of their final seven games. However, they continued to toil on the road, which is why they struggled to break free of the relegation zone.

Some fans were left particularly infuriated by an insipid performance in a 3-0 loss at Fiorentina and made their frustrations known during an open training session a few days later. In response, an enraged Simeone ordered his players to move to the pitch furthest away from the watching supporters.

"What are you doing? Are you escaping?" shouted one angry fan, while another even scaled the barriers to obtain an explanation. Simeone did not shy away from the confrontation.

"If you support us, we'll return to this pitch," he said. "Otherwise, you'll have to watch training from afar."

"No!" countered the fan. "You have to beat Sampdoria. If not, the protests will continue."

"Right then," said Simeone. "If you stop breaking our balls, we'll continue training here and, on Sunday, we'll win.

"If we don't beat Samp, you can go back to making a scene next week, okay?

The irate fan returned to his seat, while the other supporters there stood and applauded.

During the subsequent training match, though, Giovanni Marchese was inexplicably targeted by some fans – he hadn't even been on the bench against Fiorentina – and Simeone reacted by giving him the orange bib reserved for starters.

That Sunday, Marchese was included in the first XI and turned in a dynamic and determined display that played a pivotal part in a 1-0 win over Sampdoria, achieved with a wonderful goal from Llama – another subject of the fans' ire. 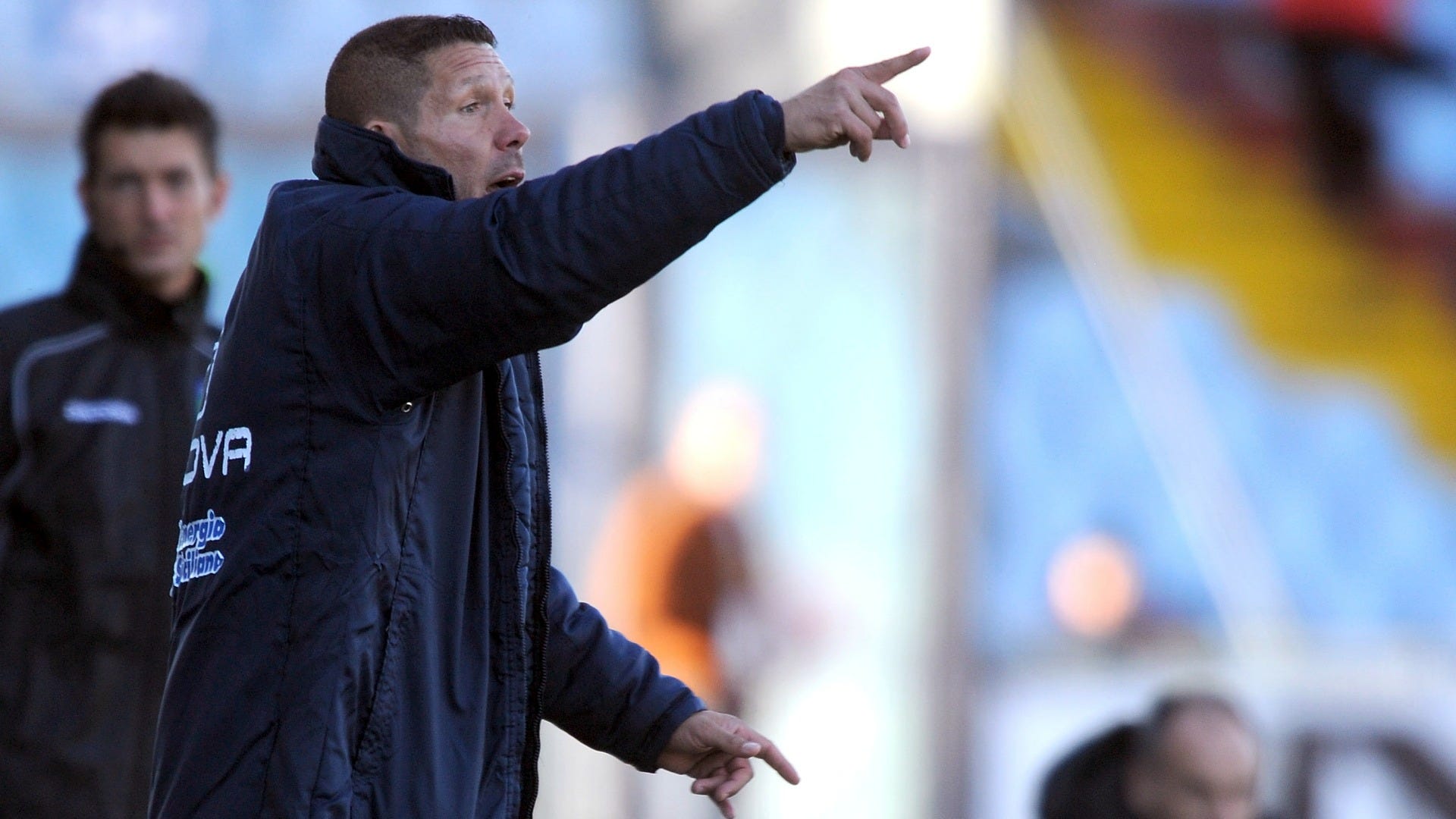 "When Catania are doing well, it's a crazy place," Carboni says, "and that victory generated an enthusiasm that lasted for such a long time.

"Simeone was decisive in the management of a tough situation and that victory gave us more belief and only strengthened our faith in him.

"Yes, the coach made us train with incredibly intensity but what is maybe discussed less is his great quality and his incredible ability to read his opponents.

"He gave every one of us homework to do and then he left us in peace: you knew that every team made had received his orders and that they wouldn't fail to carry them out."

Ricchiuti adds, "Every one of us was ready to throw ourselves into the fire for him."

That commitment to the cause was very much in evidence in a stirring 4-0 demolition of local rivals Palermo, who had beaten them 3-1 earlier in the season.

Catania's fighting spirit was on show again when they came from two goals down in the final nine minutes of their matchday 34 meeting with Juventus to earn a draw that edged them ever closer to safety. However, confirmation of their survival only arrived the following weekend.

"We had just won at Brescia and were were on the return flight to Sicily," Carboni recalls. "Sporting director Pietro Lo Monaco had convinced the pilot to put the radio on so that we could listen to the final few minutes of Genoa-Sampdoria.

"Mauro Boselli's injury-time winner for Genoa meant we were mathematically safe and I still remember today with great emotion the explosion of joy that lasted until the end of that flight.

"We were all celebrating. I had never seen Lo Monaco so happy. But Simeone and his staff were also euphoric."

Soon afterwards, Simeone told Goal: "Lazio, Inter, Atletico Madrid and the Argentina national team are the four teams I would like to coach in the future."

He has, of course, since gone on to do extraordinary things at Atletico but perhaps none of it – the Liga titles, the Europa Leagues, the Champions League runs – would have happened had he not proven himself as a coach who could cut it in Europe by leading relegation-threatened Catania to a 13th-placed finish.

The significance of saving that side from relegation should certainly not be underestimated. It certainly won't ever be forgotten at Catania.

They welcomed Simeone as a saviour. And he didn't disappoint.