The Arsenal forward is now the all-time top-scorer in the league's history, and she may well be the best player in that history too

There has never been a more prolific goal-scorer in the Women’s Super League than Vivianne Miedema.

A hat-trick on her 50th WSL appearance made that a fact on Sunday, as she surpassed Nikita Parris’ previous record of 49 goals – achieved in 110 games – to set a new record with 52. Coupled with a 6-1 win over north London rivals Tottenham, it was a perfect day for Arsenal's star name.

The manner in which the Dutch star reached that milestone, though, begs the question: Has there ever been a better footballer in the WSL than Vivianne Miedema?

When Miedema arrived in England three years ago, she was an exciting young talent, scoring 35 goals in 61 league games for Bayern Munich to help them lift two league titles.

Just 20 years old when she made the move to Arsenal, she took some time to settle into the league, netting four goals in nine starts in 2017/18.

Since then, what she has produced in the Gunners’ famous red and white has been nothing short of exceptional.

There are not many – if any – players you expect to score every game, but Miedema is one.

It’s not just the fact that she scores goals either, it’s the way she does it. There is nothing Miedema cannot do. Be it a silky solo goal, like the powering run from the halfway line against Brighton last week; a thunderous shot into the top corner, like against Reading on the opening weekend; or a simple tap-in, like the goal that rounded off her hat-trick against Tottenham on Sunday – the variety of goals she scores is mesmerising.

SHE'S DONE IT!@VivianneMiedema gets her 50th #BarclaysFAWSL to make it 2-0 to @ArsenalWFC! 🥇 pic.twitter.com/P7fi6BdoI8

On her historic day, Miedema became the first player in WSL history to score two first-half hat-tricks, too.

It was back in December 2019 that she did so for the first time, in a historic 11-1 win over Bristol in which she scored six goals and assisted four more, leaving the pitch before Arsenal scored the only goal she wasn’t directly involved in.

It was a game that epitomised her as a player. While she makes her name for scoring goals, she helps this team win titles by assisting them as well.

“She’s proven herself with the goals and her character,” Joe Montemurro said last week, after Miedema equalled Parris’ record.

“She is an absolute privilege to coach but also to know her as a person - she’s a phenomenal girl. I’m so proud to be part of her growth we’re all proud of her as a family as we are at Arsenal.

“We always talk about her goals and her finishing but the amount of work she does off the ball, creating space knowing when to trigger the press is incredible.

“When people can come to see our games again, I urge people to watch the work she does off the ball and that’s the mark of a great player.” 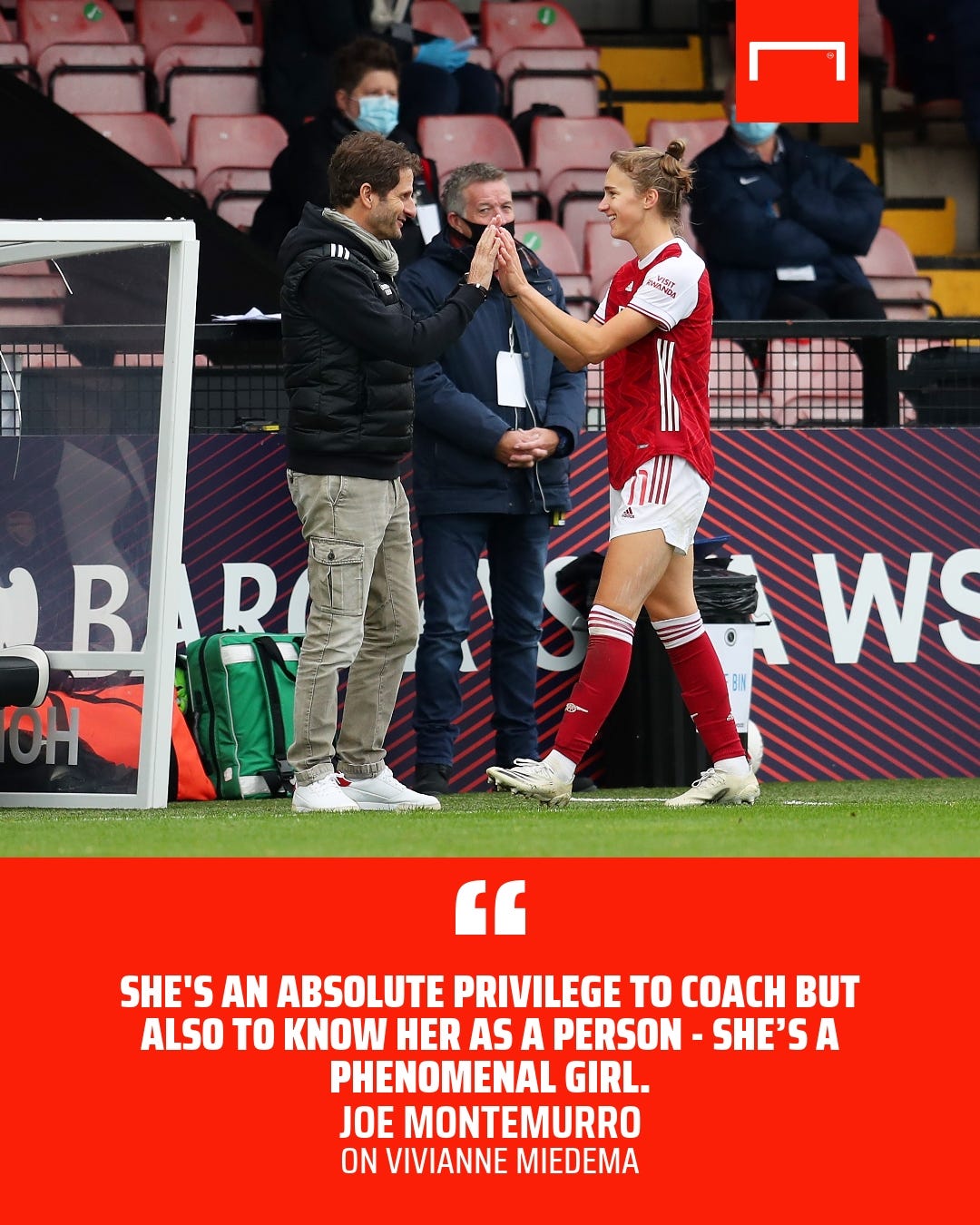 It’s that which often goes unnoticed. Rival fans will snigger and call Miedema a flat-track bully, but when big teams target her and try to mark her out of a game, she's clever enough to use that as a weapon to create space for her team-mates to get those goal-scoring opportunities. She doesn't need to score, or assist, to have an impact on the game.

And, after all, seven goals and two assists from 17 games against City and Chelsea since her move to Arsenal is hardly a record to be embarrassed of.

Before Tottenham were finally lucky enough to see the back of her on Sunday, she rounded off a terrific day with a lovely pass through to Beth Mead, who squared for Caitlin Foord to make it 6-0 to Arsenal.

Montemurro then gave her a deserved rest, enjoying a nice moment on the touchline with his star striker, who even flashed a rare smile after etching her name into the history books.

Had fans been in the ground, the standing ovation she would have received would have been tremendous, and well-deserved.

But there’s no need to worry, at just 24 years old, fans will see plenty more of her magic yet.

If Miedema is not already the greatest player in this league’s history, she certainly will be before long.