Cristiano Ronaldo with two goals on his second debut for Manchester United – it was always going to be like this, wasn't it?

The script had been written for his homecoming from the moment it was announced he would be rejoining the club two weeks ago. There was no way he wasn’t going to let this special occasion pass without finding the back of the net.

The atmosphere ahead of kick-off felt more akin to a Ronaldo testimonial than a Premier League game. Thousands of people in CR7-branded shirts flocked to see the prodigal son return to Old Trafford.

But there was nothing testimonial-like about the 36-year-old’s performance. His sprint and touch for his second goal showed – if there was any doubt – that he has, of course, still got it.

Luke Shaw drove forward, and slipped the ball through to Ronaldo, who raced onto the pass and produced a neat finish through the legs of Freddie Woodman.

The Newcastle goalkeeper might have nightmares to the tune of 'Viva Ronaldo!', though, after he was twice underdone by the Portugal international. On both occasions, he should have done better.

Throughout his rebuild Ole Gunnar Solskjaer has been keen to invest in players who are about the team; he has no time for egos who think they’re bigger than the club.

But this is Ronaldo; he's something different; he's always been the exception to the rule. This day was always going to be all about him. And Solskjaer knew that himself.

As the United manager said in his own words in the programme: “We’re talking about someone who, personally, I regard to be the best player in the history of the game.” 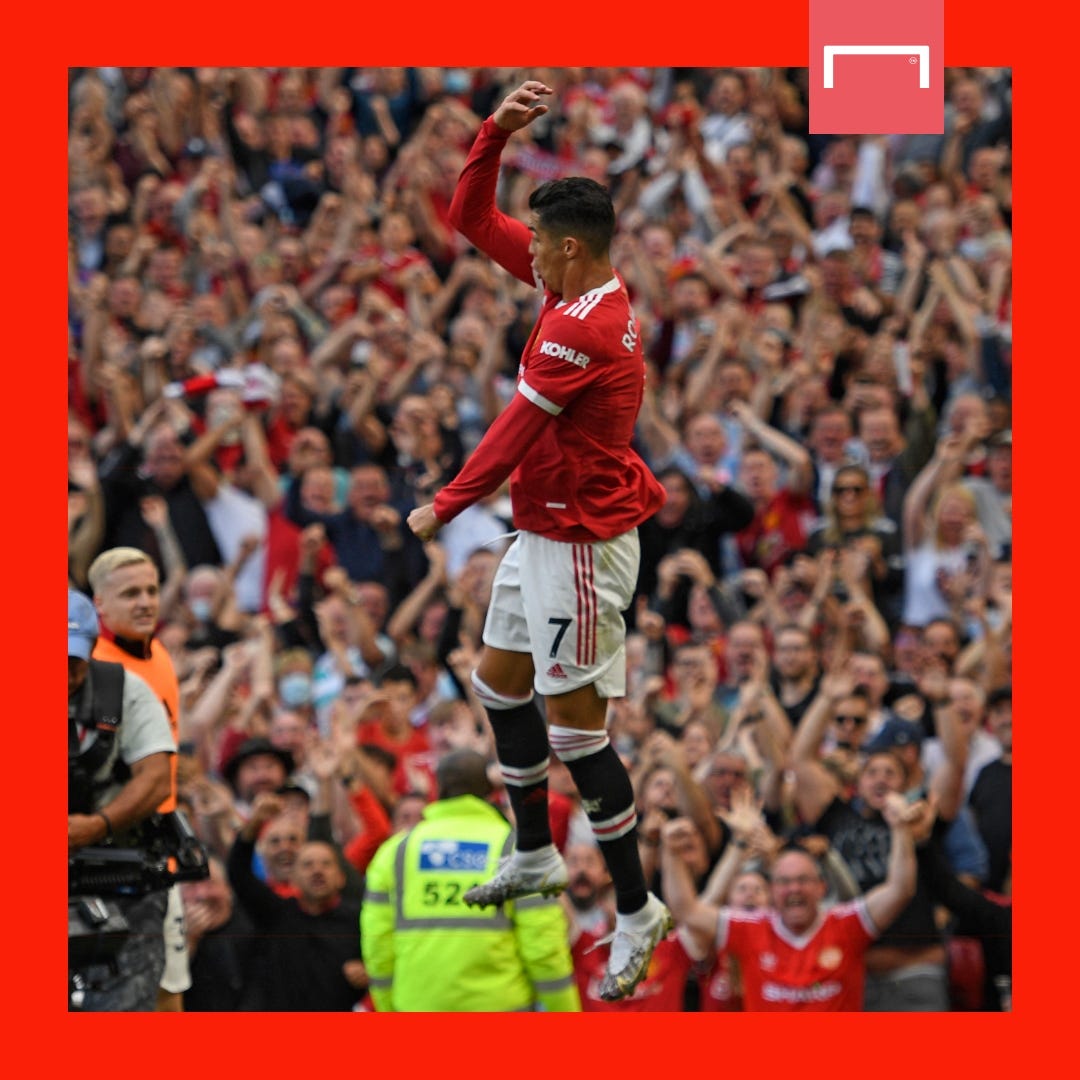 With that comes all the fanfare and sideshow you would expect of a five-time Ballon d’Or winner.

Fans were offering thousands of pounds to buy tickets to be there for the crowning moment, media passes were oversubscribed and anyone who was anyone was in the directors' box.

If there was any doubt about how big a deal this was, even Avram Glazer, the co-owner who hasn’t stepped foot in the ground since August 2019, turned up.

On the walk down Warwick Road towards the stadium, traders were selling every piece of Ronaldo merchandise imaginable: scarves, flags and face masks were flying off the stalls. The demand for Ronaldo's shirt in the club’s megastore has been so high they’re at risk of running out of the number seven.

It really didn’t have the feel of a normal matchday. Hours before kick-off, the streets were filled with thousands clad in Ronaldo gear.

There were even original tops from when he was here in 2003, while a new legion of followers have clearly immediately embraced a player they are barely old enough to remember playing for United first time around.

And with his debut double, the demand for those No.7 shirts won’t be slowing down any time soon.

Newcastle did their best to ruin the Ronaldo party, in fairness to the visitors. Steve Bruce’s side made life difficult for United, especially on the counterattack, with Allan Saint-Maximin and Joe Willock causing the home side problems.

But Woodman clearly got the memo that this was to be Ronaldo’s day. 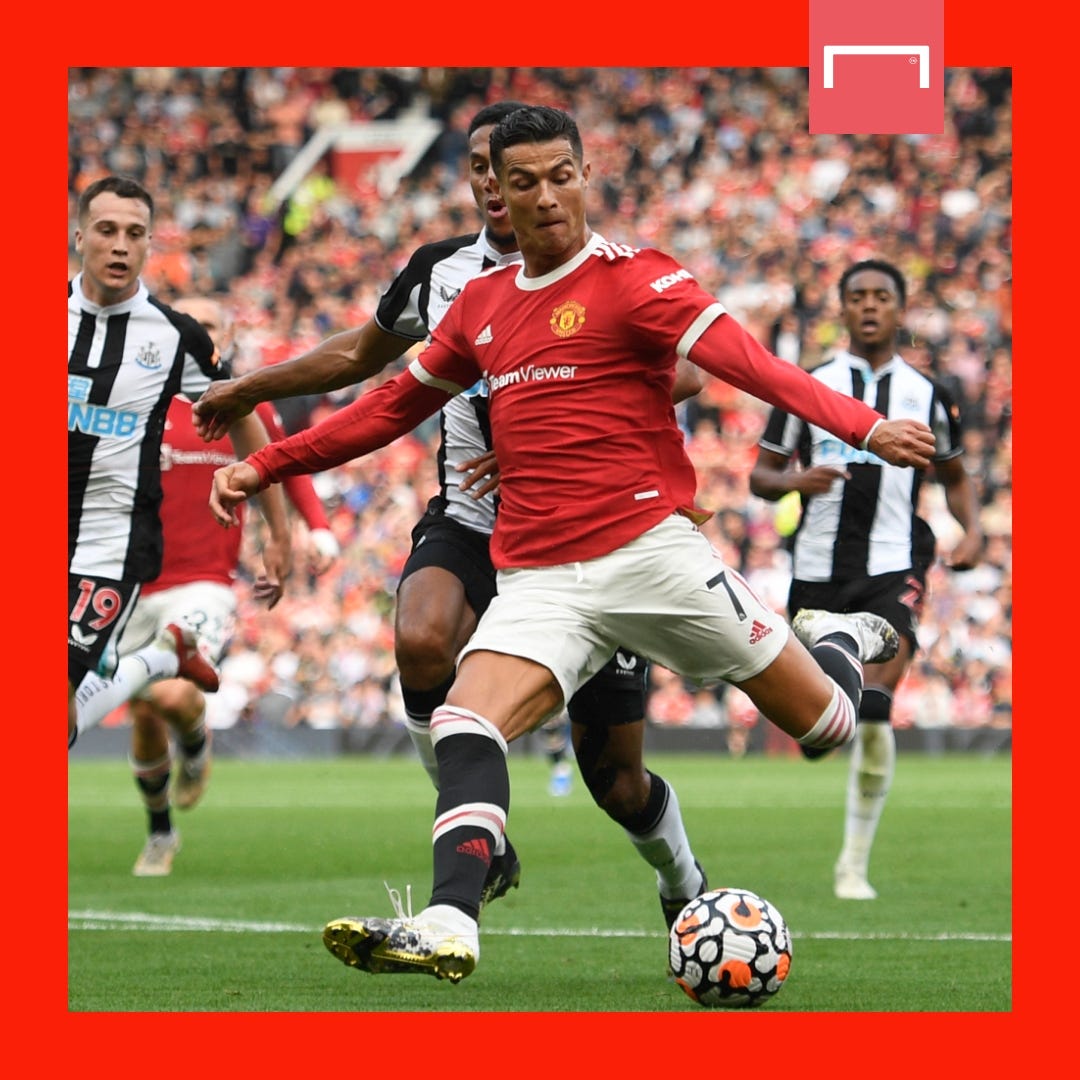 The Newcastle No.1 spilled a shot from Mason Greenwood at the Portuguese forward's feet, allowing Ronaldo to open the scoring from three yards out just before the break.

That famous 'Siiiuuu!' celebration was unleashed in the corner in front of the visiting Newcastle fans.

His goal masked what was a laboured first-half performance by Solskjaer’s side. Little clicked going forward and when Javier Manquillo equalised after the break, it was no less than the visitors deserved.

But that wasn’t going to stop the party mood inside Old Trafford. Choruses of 'Viva Ronaldo!' raised the roof when he celebrated his second goal before an exuberant Stretford End.

That left-footed finish, which somehow found a way through Woodman's legs, made him the oldest player to score a brace in a Premier League match since Graham Alexander for Burnley in April 2010.

Bruno Fernandes and Jesse Lingard both scored great goals to put the seal on a 4-1 win but they were mere footnotes in the latest chapter of Ronaldo's remarkable career.

"You’ve only come to see Ronaldo," the United fans sang to the away end.

But plenty of them will only come to Old Trafford this season just to see Ronaldo. The showman has returned home and everyone wants a front-row seat.