The U.S. fell 1-0 to the Canadians in the Olympic semi-final and they must now be content to play for the bronze medal

The U.S. women’s national team saw their Olympic dreams die on Monday as they fell 1-0 to Canada in the semi-final.

It was a fitting result in a tournament that has seen the USWNT fail to produce anything close to their best performance in any of their five matches.

Though the USWNT will still have a chance to win a bronze medal, this Olympics can only be described as a failure for a team that came in as the heavy favorites to take home gold.

Canada notched their first win over the U.S. in 20 years by playing a physical, battling match that frustrated their opponents and taking advantage of a second-half penalty from Jessie Fleming after a VAR review.

The U.S. pressed for a late equalizer, but it was not to be as Carli Lloyd’s late header off the bar was the closest they came.

Disjointed U.S. gets what they deserve

The USWNT performance at this Olympics was marked by a curious lack of precision and execution, and Monday’s match against Canada was a fitting denouement.

Vlatko Andonovski’s team was frustrated in the first half by a physical Canada side, failing to put together a single shot on target. 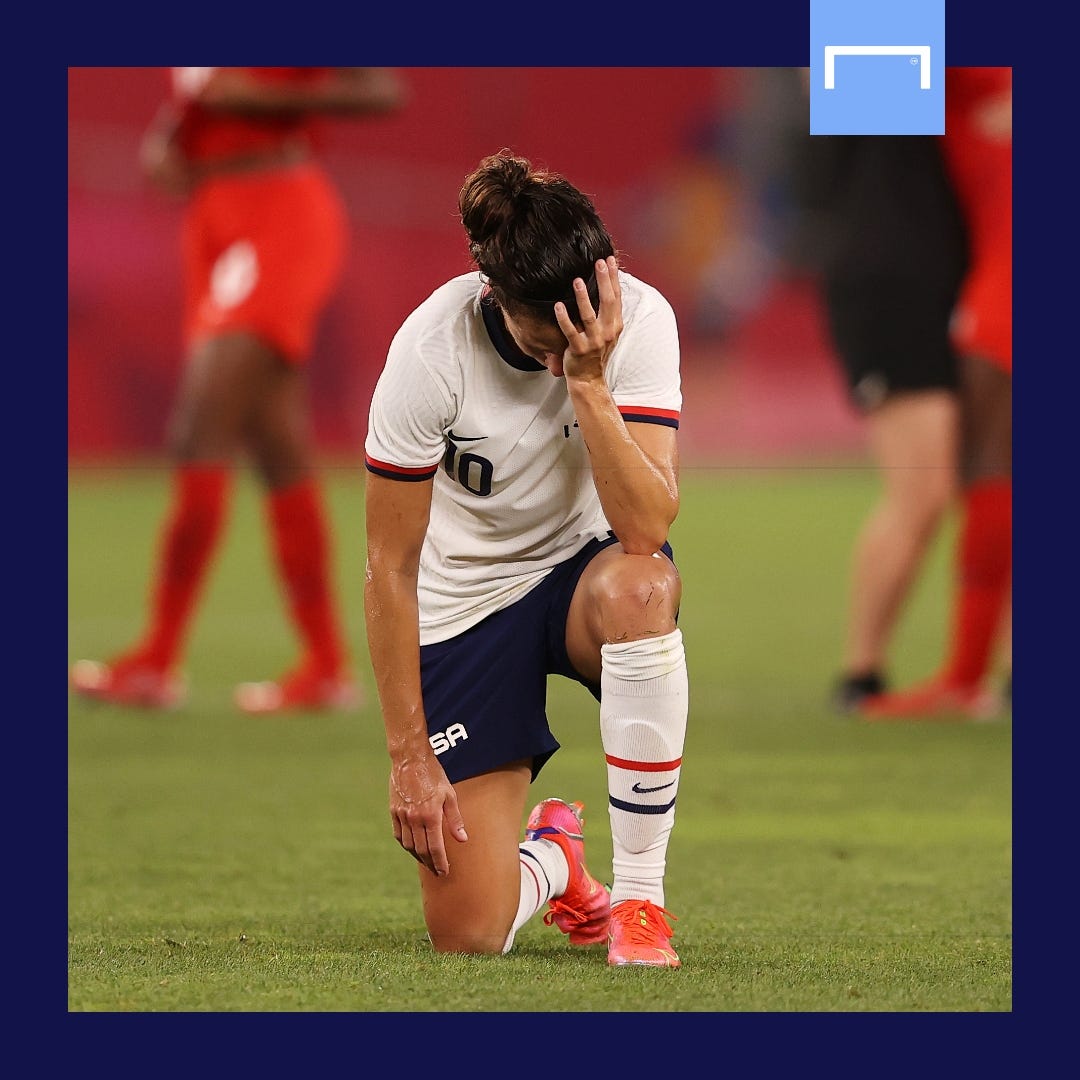 The second half ironically saw them put together one of their best stretches of the tournament, as they appeared to be on the verge of the opener. But Tierna Davidson’s challenge on Deanne Rose, which appeared innocuous on first viewing, was revealed to be a foul after a VAR review, and Fleming made no mistake from the spot.

Though Lloyd hit the bar with a late header, there was never a real sense that the U.S. was destined to find an equalizer after they went down a goal.

In truth, the USWNT didn’t deserve any more from this tournament than they’ll get: a chance at bronze.

The U.S. never found any sort of rhythm all tournament, which must be at least partially placed at the feet of Andonovski.

In his first major tournament, the U.S. boss attempted several different combinations on the pitch but failed to find a winning formula after he won 22 of his first 23 game in charge leading up to the Olympics. 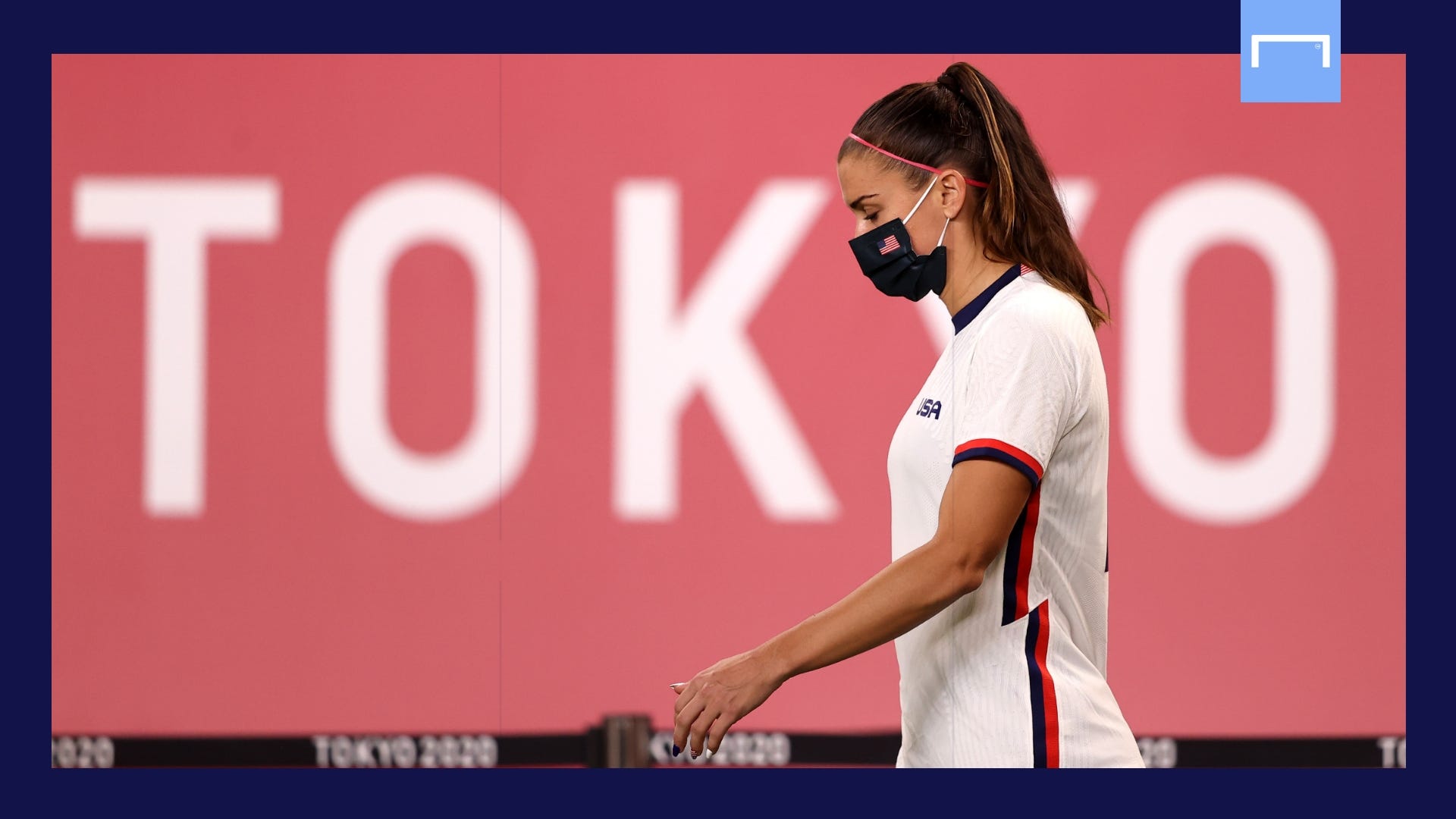 Perhaps hamstrung by the aging roster he chose, Andonovski was forced to make triple subs near the 60th minute of both the quarter-final and semi-final at the Olympics, disrupting any rhythm the U.S. had.

In his post-game press conference, Andonovski denied that his team's age factored against them at the Olympics.

"Not at all," he said. "We had really good rotations going on and I felt like the way we did, I don't think our pace was the problem at all."

None of the team’s big stars had the kind of tournament that was expected, particularly the team’s attackers. After not being shut out in four years, the U.S. failed to score in three of their five Olympic matches. That is simply not acceptable for a team of this caliber.

Alyssa Naeher has come up huge for the U.S. women’s national team several times in major tournaments, particularly in the quarter-final against the Netherlands. Seeing the goalkeeper go down in the first half, then, was a huge blow for her and for the USWNT.

AD Franch has been one of the NWSL’s best goalkeepers in recent seasons but the 30-year-old is untested at the international level, as her substitute appearance against Canada was just her sixth cap.

Naeher has been especially effective from penalty kicks, leaving one to wonder what could have been on Fleming’s spot kick had she been in goal instead of Franch.

Fleming must be given credit too, as her penalty was rifled into the corner despite Franch guessing correctly.