Luis Suarez’s elite mentality shines through in every single training session, according to one of the Atletico Madrid star’s former Liverpool team-mates.

Sergi Canos spent a season alongside Suarez at Anfield, having joined the Reds from Barcelona in 2013.

Canos was just 16 at the time, but would often be called up by manager Brendan Rodgers to train with the senior squad.

And in an exclusive interview with Goal which will be published in full later this week, the winger, who now plays for Championship promotion hopefuls Brentford, has recalled the day he first encountered Suarez and his burning desire to play and compete.

"He was fantastic," Canos said. "It was the first time I thought okay, this is Luis Suarez who is scoring goals every weekend, earning who knows how much, and he’s training like this on a Monday?!

“I remember the very beginning of one training session. I was very good friends with Jose Enrique, and all the Spanish guys used to have breakfast together. Luis had something going on with the nail on his foot. I don’t know what happened, but he was limping.

“And Jose Enrique was like: 'Well it’s Monday, don’t train’. Luis was like: 'Maybe, maybe, I’ll ask the physio’.

“And he went out and trained, limping, on Monday! They’d just played on the Saturday! I went home and I was amazed. I was like: ‘This guy loves football!’

He just said: ‘I can’t stay inside, I just want to go outside and train with you guys!’ We were like: ‘Yes, but what’s the point?!’

“Now I understand that there is a point. Now, I’m like this. That’s why the standard has to be up here.”

How good was Suarez at Liverpool?

Despite spending only three full seasons on Merseyside, and winning only one League Cup, Suarez will go down as one of the Reds’ best-ever Premier League players.

He scored 82 goals in 133 appearances in all competitions, winning the Golden Boot in 2013-14, as well as the PFA Player of the Year and FWA Footballer of the Year awards. 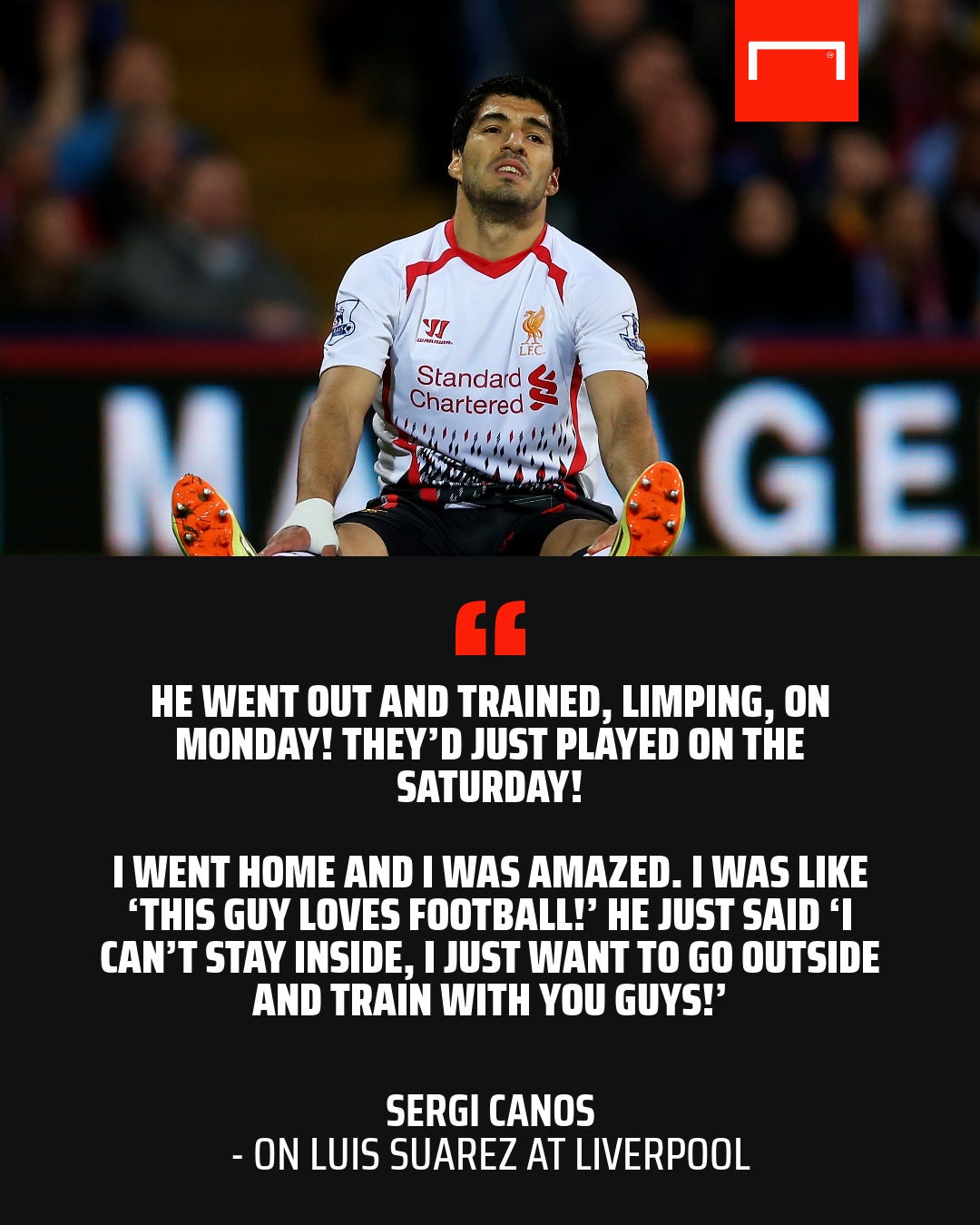 He left for Barcelona in the summer of 2014, having almost led Rodgers’ side to a remarkable title win. At Camp Nou, he scored 198 goals in six seasons, winning four Liga titles, the Copa del Rey four times and a Champions League crown.

On Tuesday, he will be looking to shoot down a familiar foe when Diego Simeone’s side take on Chelsea in their Champions League last-16 first-leg tie in Bucharest.

And what about Canos?

A Spain international at all age-groups up to Under-19s level, Canos left Liverpool in 2016 having made just one Premier League appearance, joining Norwich City in a £3.5 million ($5m) deal.

He spent just six months with the Canaries, though, before joining Brentford in January 2017.

There, he has made 145 appearances. He was part of the side beaten by Fulham in the Championship play-off final last August, and has been a virtual ever-present this season for Thomas Frank’s men, who currently sit second in the table.