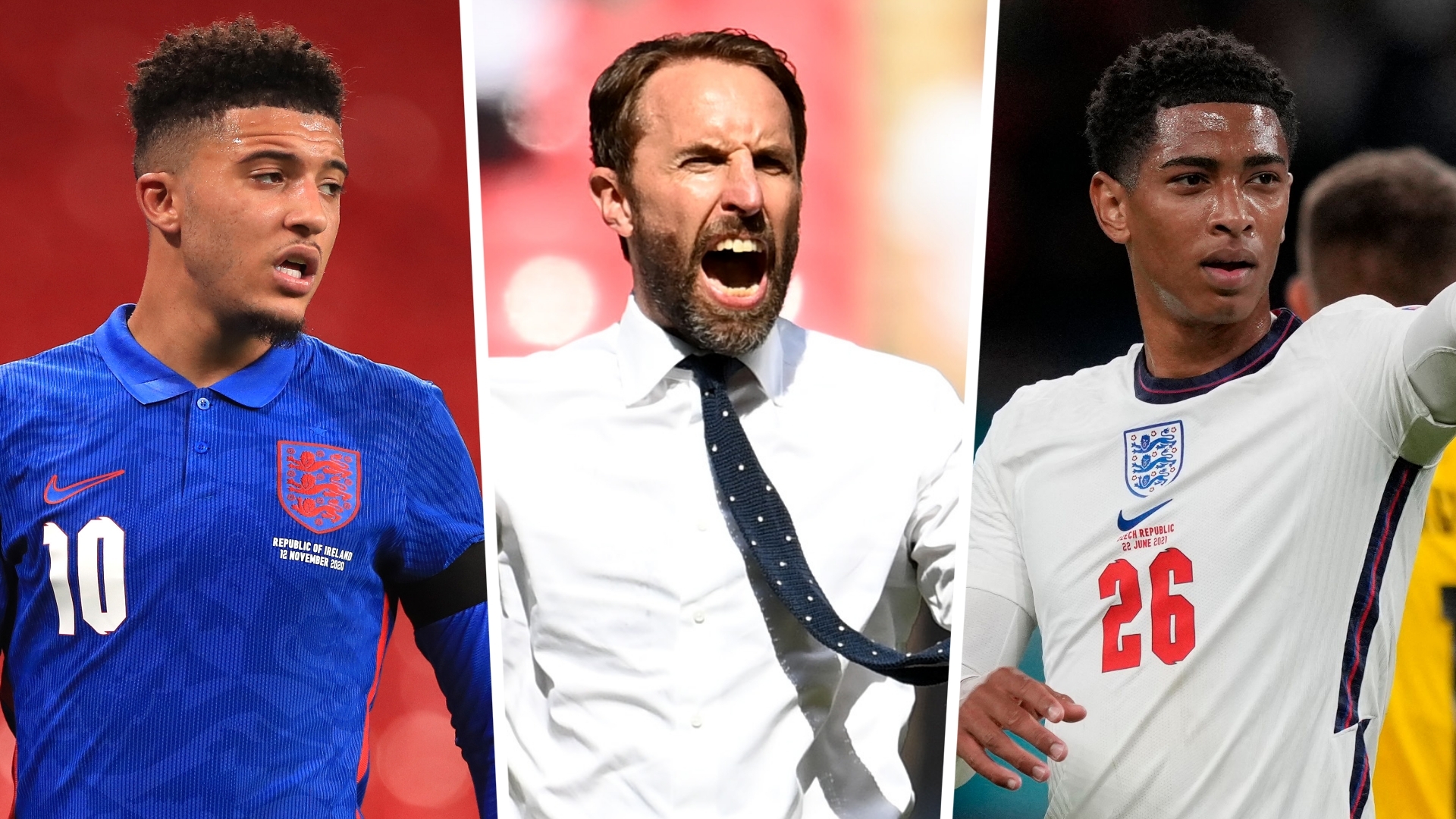 More and more the Bundesliga has become the go-to destination for young Premier League players, with the Three Lions reaping the benefits

In recent years when England have played Germany at major tournaments, there have been a host of Premier League players in the German lineup.

Rarely, though, have there been any players plying their trade outside of the English game within the Three Lions' squad.

And yet when the international foes face-off in the last 16 of Euro 2020 on Tuesday, there will be two stars of the Bundesliga within the England squad.

Jadon Sancho and Jude Bellingham have thrived since their respective moves to Borussia Dortmund, with their form at Signal-Iduna Park making their selections for Gareth Southgate's squad almost certainties for much of 2021.

Their success at such a young age has in turn opened up a pathway that others are keen to follow.

"One of the things we did after the World Cup in Brazil, we did a big study on Germany and their development programme, their youth programme, they've got an incredible football history," Southgate said on Monday.

"Even when they've had teams that on the outside people have said will struggle. In 2002, we won heavily in Munich and Germany got to the final and we were a long way on our way home.

"In recent times, club-wise, a lot of clubs have taken our players on loan, or signed them in the case of Jadon Sancho and Jude Bellingham. that market seems to be open for people. Not all of that has been successful but some have been.

"I think it's good for players to play abroad, it broadens their football education, they get different styles of play and styles of coaching. In our country, our players are fortunate to work with some of the top managers in the world in their clubs as well. We're getting that exchange of ideas and football education that didn't have in the past."

Emile Smith Rowe, Ryan Sessegnon and Reiss Nelson have all spent time on loan in the Bundesliga, while Jamal Musiala was an unknown Chelsea academy starlet and England youth international when he swapped the Blues for Bayern Munich in the summer of 2019. Two years on, he could be lining-up for Germany at Wembley this week.

Other promising talents have taken the plunge in recent seasons to gain first-team experience including Ademola Lookman and Premier League winner Demarai Gray.

“It’s the next best thing to getting them a Premier League move," one agent, who has overseen moves for two young English players to the German top-flight, tells  Goal .

"If you rank Europe’s top five leagues, I’d say the Bundesliga is number two behind the Premier League, though maybe Serie A is starting to threaten that recently."

Per Mertesacker, the former Germany and Arsenal defender who is now the head of the Gunners' academy, agrees.

"It’s a great experience to play in the Bundesliga, as it sits right below the Premier League in terms of the tempo,"  Mertesacker told Goal  in 2019.

"I think from the Under-23s to Germany and back to the Premier League is a good step in between. Sometimes you get stuck in the first-team training bubble. You are training with the first team, which looks nice, but you need the competition.

"If the U23s is not competitive enough for you in terms of tempo, you need another step between that. At the moment, we have positive examples of players going to Germany, taking that little step back and evolving in that German system in the Bundesliga.

The link between the two countries means that almost every academy match in England now has a series of Bundesliga scouts in attendance in the hope of spotting the next Sancho or Bellingham.

There is recognition around Europe that England is producing one of the strongest generations of talented youngsters anywhere in the world right now, and German teams are keen to ensure they are at the front of the queue to sign them.

But why is a move to the Bundesliga so appealing to British players, particularly given the strength and exposure the Premier League offers?

“The issue in England comes from the fact that there’s a blockage in terms of young players between the ages 17 and 21 getting into the first team," the aforementioned agent reveals.

"Clubs can buy anyone they want, managers are under pressure and are not going to take a risk on a young kid from the academy when they can spend millions on a player who has 200 games in La Liga or Ligue 1 or wherever.

“You see a lot of players suffering. I look at Liverpool, just as an example; they had Ryan Kent, Sheyi Ojo, Harry Wilson, Sergi Canos and Rafa Camacho. All young wide players with talent who want to progress. None of them have played more than a few games for the first team. Two of them - Ojo and Wilson - are 24 and still at the club.

“And in England, it’s not easy to get an ideal loan once you get to a certain level. It’s hard to send a 19-year-old talent on loan to a top-10 Premier League club and know he’s going to play. So that’s where the Germany option comes in.

“If you can’t give a player assurances that they’re going to play, then why wouldn’t a player go to Germany? The wages are good, the level is good, it’s a technical league but it’s not the Premier League. As a young player, you can stand out there if you have pace, if you’re an athlete and if you have talent."

And while the opportunities to play are what drives English players towards Germany, the chance to learn under coaches that are quickly becoming the gold standard in world football is also too good an opportunity to turn down.

Jurgen Klopp and Thomas Tuchel are currently leading the way, with Julian Nagelsmann likely to be the next German coach to win a Champions League trophy after taking over the managerial reins at Bayern Munich.

Their ideas and methods are being copied and adapted by coaches around the globe, and as such players are keen to learn from the source how the game is going to be played over the next decade or so.

What particularly helps English players adapt to those ideas is that a number of training sessions within Bundesliga clubs are run in English, meaning they find it easier to pick up on what is expected of them on matchday.

“I think what else a player benefits enormously from is the level of coaching. German coaches, and the German coaching structure, is tactically very advanced," the anonymous agent says.

"A player of mine described it like this; in England, in the Championship or League One or even the Premier League in some cases, you go out onto the field with a couple of pages of the book to remember. In the Bundesliga, you have to know the whole book, cover to cover, inside out.

“They might struggle with it at times, and some may not handle it, but they learn from it, and it goes in the end.

"I think what also helps is the language. Germany and Holland is a lot less harsh, in terms of English speaking. That barrier is not as strong as it is in Spain or France."

So as Bellingham prepares to celebrate his 18th birthday by taking on the country which has given him his first opportunity to play top-fight domestic and European football, the natural question is who will be the next English starlet to make the leap?

Highly-rated Aston Villa midfielder Carney Chukwuemeka has been heavily linked with a move to Bayern, while 16-year-old winger Jamie Bynoe-Gittens - who has been compared to Sancho by some - has already spent a season at Dortmund having left Manchester City in the summer of 2020.

“Football is also like a lot of other industries, it’s trendy," the agent concludes. "People see a player go to Germany and do well, and they follow. They want to 'do a Sancho' or 'do a Bellingham', and the players are the same."

That can only be of benefit to Southgate and his successors going forward as England look to end their 55-year wait for a major trophy.

"Jadon Sancho comes back and plays for England because of that journey, where he has learned a lot and he has used those facilities. I am actually quite excited about that for English and British football."