It's always been difficult to know exactly what to make of Domenico Berardi.

The talent is obvious; it always has been.

Juventus first noticed him at a youth tournament in 2006, when Berardi was still only 12 years of age. A Bianconeri scout offered him the chance to immediately move to Turin but Berardi refused.

"I wasn’t ready to leave my family and my home in Calabria," he revealed in the Gazzetta dello Sport. "I remember crying at the thought of leaving."

After a couple of years with local side Cosenza, though, he was picked up by Sassuolo after being spotted while playing five-a-side football with his brother, who was studying in Modena at the time.

"[Pasquale Di Lillo] flagged me to Luciano Carlino, assistant manager of the Allievi (Under-17s) youth team, who within three days had called me in for a trial," Berardi explained. "It went well and I just never went back home."

He's never gone anywhere else either, though, and that's been a topic of constant debate in Italy ever since he broke into the Sassuolo senior squad nine years ago.

Juve signed him on a co-ownership agreement in 2013 but he would never end up in Turin, even though the Bianconeri retained the right to acquire Berardi for a reported €18 million (£15m/$22m) after Sassuolo bought him outright in 2015.

There has since been talk of moves to the likes of Inter, whom Berardi supported as a boy, and Roma, but they've never materialised, for one reason or another.

Firstly, there's no denying that he experienced a dip in form after initially taking Italian football by storm along with then-Serie A newcomers Sassuolo during the 2013-14 season.

Indeed, while the versatile winger scored 31 times across his fist two top-flight campaigns, he managed 'only' 22 goals across his next three, with injuries undoubtedly hindering his development. 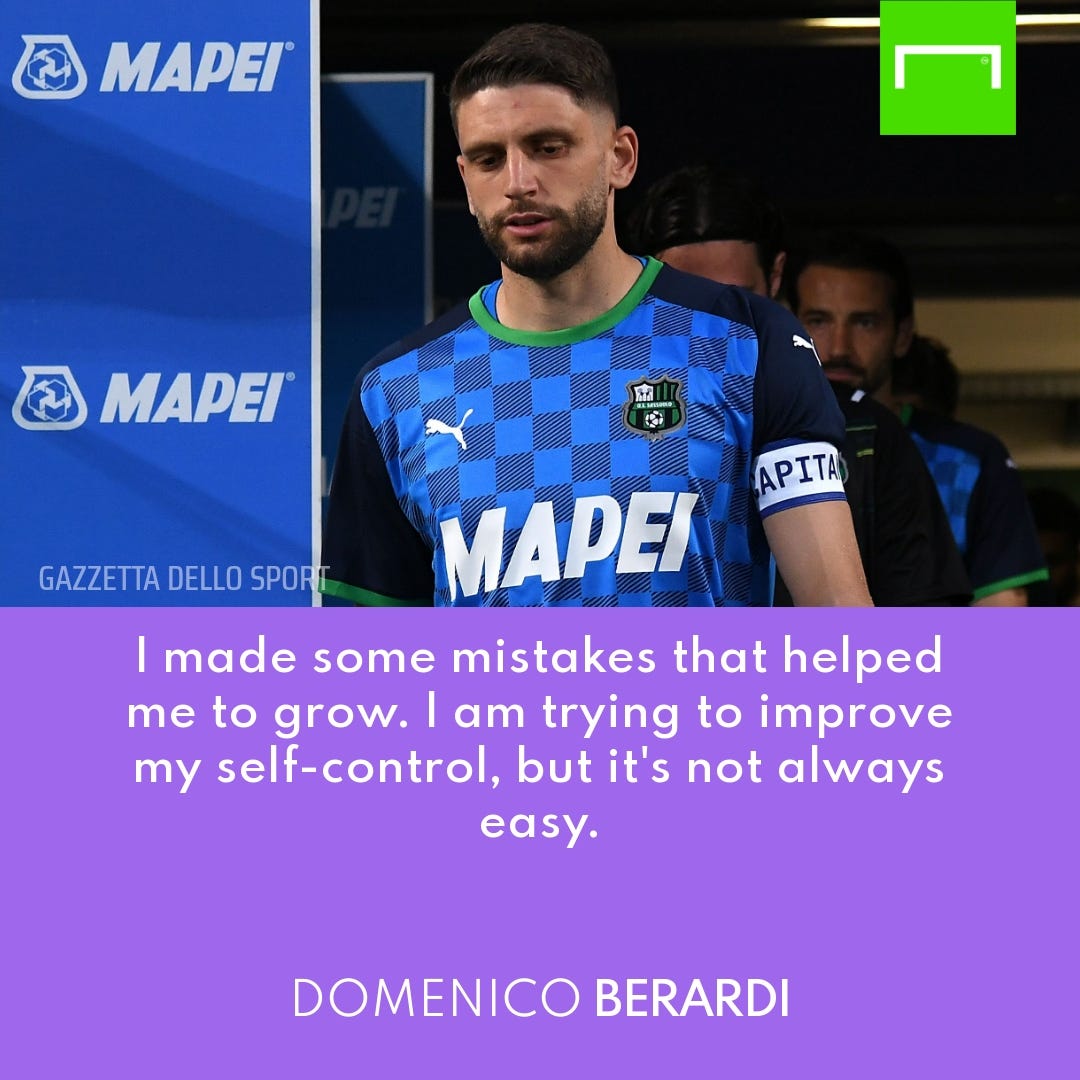 By that stage, though, there were doubts over Berardi's temperament. Even during his younger days, his discipline was considered a major concern.

He was banned from representing the Azzurri at any level by the Italian football federation (FIGC) for nine months after failing to respond to a call-up for the 2013 U19 European Championship.

At club level, meanwhile, he was racking up yellow and red cards at an alarming rate, with one suspension even preventing him from lining out for Italy's U21s.

"I made some mistakes that helped me to grow," he admitted to the Gazzetta back in 2015. "I am trying to improve my self-control, but it's not always easy."

He undoubtedly improved in that regard. But there remained a suspicion that Berardi didn't have the right mentality to play at the very highest level; that his happiness at Sassuolo was somehow indicative of a weak-willed character, one unwilling to fight for a starting spot at a super-club.

As a result, the constant support of former Sassuolo coach Roberto De Zerbi was absolutely key to Berardi taking a game to a whole other level over the past 18 months, as underlined by his career-high 17 Serie A strikes last season.

"You can only understand Berardi's case if you know the person well," De Zerbi told La Repubblica. "He is a genuine boy, aware of his quality but also of the fact that it is his environment that gives him strength: his friends, his loved ones.

"Domenico is unsettling [for some people] because we are used to a world where everyone wants to climb more, shine more, earn more. His happy stay at Sassuolo goes against the rules."

The 26-year-old is certainly something of an outlier yet he is central to Italy's hopes of Euro 2020 glory.

Many neutral observers would have been surprised by the fact that he started last week's tournament-opener against Turkey ahead of Federico Chiesa, who is coming off the back of an excellent debut season at Juventus. 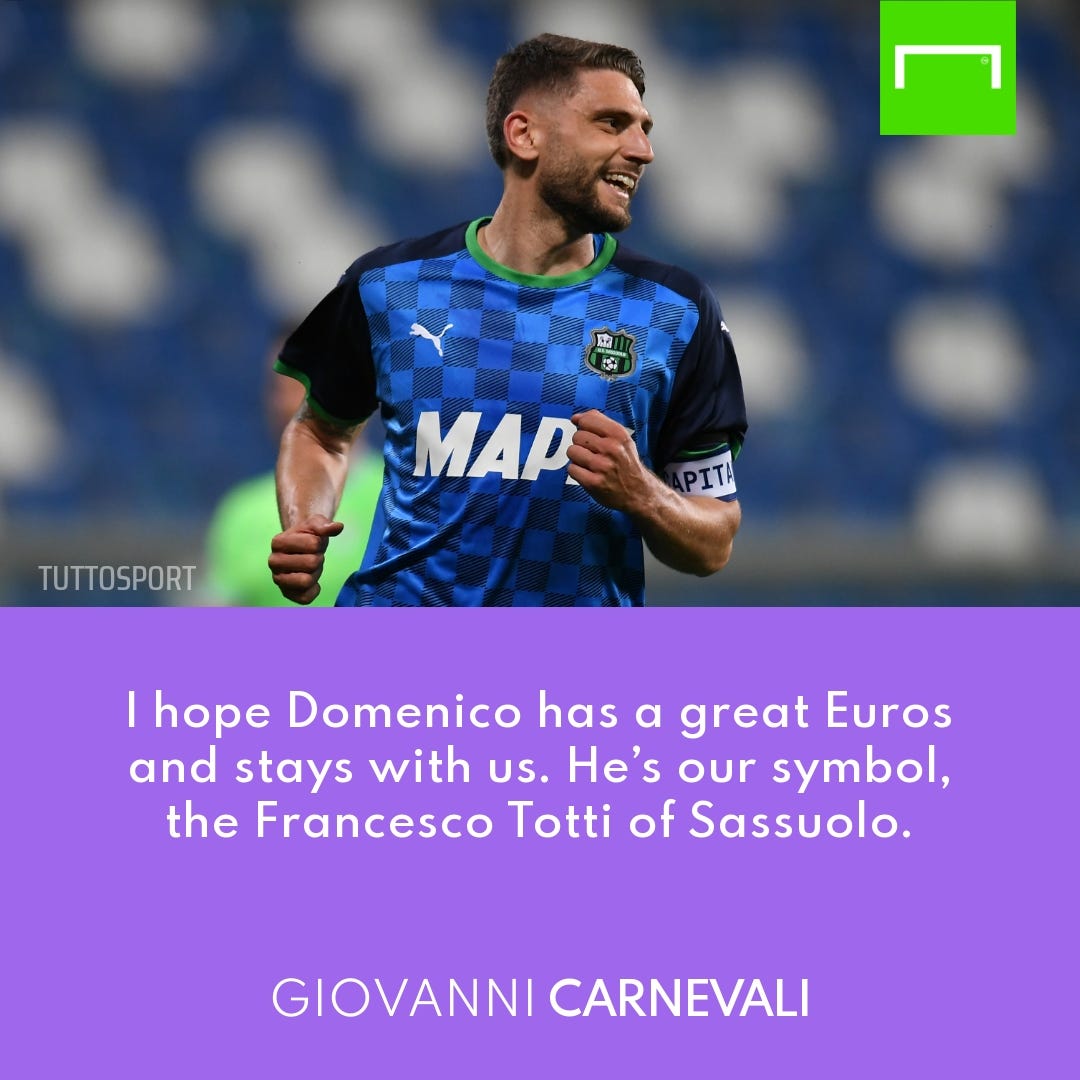 But it was the right call by Roberto Mancini, as Berardi proved with a dynamic display: he was involved in all three goals and pressed relentlessly, much to his coach's delight.

When he was younger, Berardi was compared to iconic No.10 Roberto Baggio by former Italy midfielder Giancarlo Antognoni, while the man himself felt his game was similar to that of Dutch winger Arjen Robben.

In reality, though, he's quite different to both. He is not as accomplished a dribbler as either player and while he has a fantastic left foot, like Robben, he's not blessed with as much pace as the former Netherlands international.

However, he is strong, clever, industrious and has developed into what former Italy coach Arrigo Sacchi expected: "a very modern footballer that plays with and for his team all of the time and all over the pitch".

It's easy to understand why, then, that the transfer talk has started again, particularly with De Zerbi having left Sassuolo this summer to stake over at Shakhtar Donetsk.

The Neroverdi are obviously hoping to hold on to Berardi, who has five goals in his last seven appearances for his country.

"I hope Domenico has a great Euros and stays with us," CEO Giovanni Carnevali told Tuttosport. "He’s our symbol, the Francesco Totti of Sassuolo."

Berardi, who became a father last year, is certainly revelling in his new role in Reggio-Emilia and has regularly spoken of the enormous debt he owes the club for always standing by him.

"I can give something more, I have become more leader, I take responsibility and I try to give 100 per cent for my team-mates," he said last season.

But it's telling that he's now talking more openly than ever before about now finally feeling ready to test himself elsewhere.

"I have rejected important teams in the past because at that moment I did not feel mature," he admitted. "But, over the years, I have grown up. If the opportunity of a great club should happen, I will evaluate it."

Should he maintain his strong start to the Euros, he won’t be short of offers this summer. But, whether he leaves Sassuolo or not is probably irrelevant.

In reality, what matters is that he now seems utterly at ease with himself, on and off the field, for both club and country.