The Merseysiders have three players included in the NxGn 2020 list of the world's best teenagers, but their academy is about more than just wonderkids

Ask James Milner to name his favourite moment from this season and the chances are that his answer will not be one you would expect.

Not his last-minute penalty winner against Leicester in October, nor the victory over Manchester City at Anfield a month later. Forget the Merseyside derby in December, or the memorable triumphs against Manchester United, Tottenham, Chelsea and Arsenal.

No, Milner’s high point came in February – and in a game in which he didn’t even play.

“I’ve never seen him so happy – ever!” says one club source, referring to the night a Liverpool Under-23 side, led by Neil Critchley, defeated Shrewsbury in an FA Cup fourth-round replay at Anfield as Milner watched on from behind the dugout. “He was absolutely thrilled for the young lads, and for Critch and the staff.”

What a night it was for Liverpool’s academy, as a team with an average age of just 19 years and 28 days, and led by the youngest captain in the club’s history, got the better of League One opposition in front of a raucous 52,000 crowd. “They played like a Liverpool team,” said a beaming Critchley, “I’m so proud of them.”

It has been a rather unusual campaign of course, with circumstances meaning that so many of the Reds’ young brigade have been able to get a taste of senior football. There have, remarkably, been 22 first-team Liverpool debuts this season, with 21 of them aged 22 or under. And that’s before we even take into account the contributions of Curtis Jones, Pedro Chirivella, Ki-Jana Hoever or, of course, the brilliant Trent Alexander-Arnold.

There have been great stories everywhere. Take Adam Lewis, the Fazakerley-born left-back who starred against Shrewsbury. That was the 20-year-old’s first 90 minutes of the season, with a serious knee injury having kept him out for the first half of the campaign. He has been at Liverpool since the age of five, and was dreaming of playing at Anfield even before then.

What about Tom Hill, a baby-faced 17-year-old attacker from Formby who had not even played for the U18s when this season began, but who can now say he has played in a League Cup quarter-final? Or Leighton Clarkson and Jake Cain, inseparable pals off the pitch, who can now talk about the night they bossed the midfield in front of a full house at Anfield?

Yasser Larouci was a winger 18 months ago, but in January he was a left-back, keeping the likes of Theo Walcott and Richarlison on lockdown in a Merseyside derby, while on the other flank Neco Williams produced his best Alexander-Arnold tribute act. Both, remember, are still teenagers, babies in footballing terms. 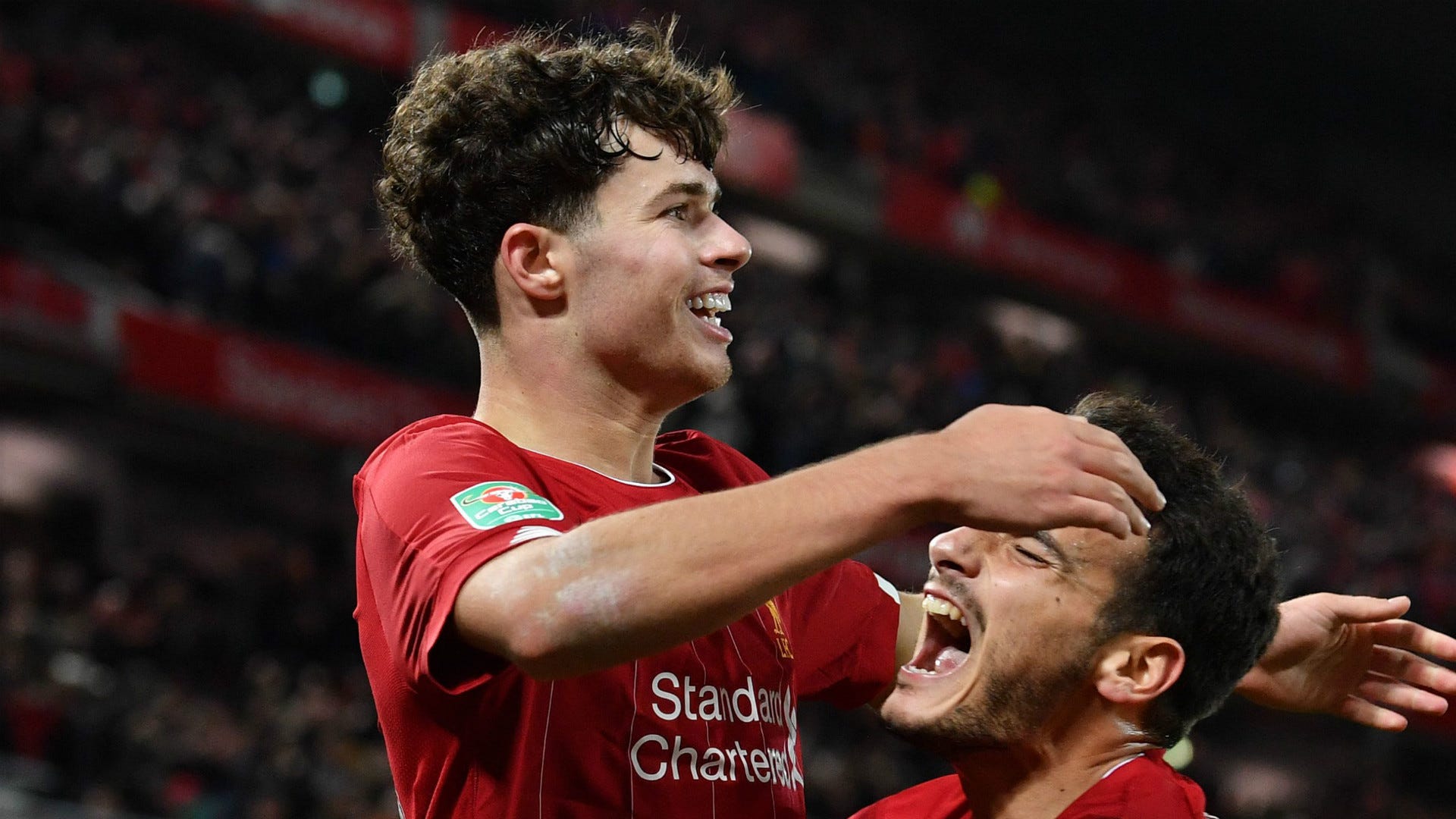 Wonderful stories, wonderful memories. But at Kirkby, the message is clear; enjoy the moment, but never stop looking to the future.

“We don’t celebrate debuts,” Alex Inglethorpe, Liverpool’s academy director, told Goal last year. “We don’t want a player’s best moment in football to be their debut, or winning the FA Youth Cup. If that’s the highlight, then we’ve failed.

“The question should always be ‘what’s next?’”

So, what is next?

That is the big question. There are, of course, no guarantees with young footballers. Inglethorpe uses an analogy that “some take the elevator, while some take the stairs”, and for every Alexander-Arnold, whose rise has been meteoric, there are many, many others who are forced to build their career in a different way.

For many, that will be in the Football League. Others will drop further down the pyramid, while some will, inevitably, drift away from the game altogether. Research conducted by the Professional Footballers’ Association (PFA) in 2017 showed an alarming ‘drop-out’ rate, with as many as five in six boys who are in elite academies at 16 finding themselves out of professional football by the age of 21. It is a brutal sport, and toughness is required – mentally as well as physically – if you are to crack it.

Liverpool, of course, are acutely aware of such issues. Neil Mellor, a striker who made 22 first-team appearances for the Reds between 2002 and 2005, remembers being told by Steve Heighway that the academy’s aim was “to prepare you for the day you leave Liverpool”, and it is clear speaking to the likes of Inglethorpe or Phil Roscoe, the head of player care, that there is a huge effort from the club to develop not only players, but rounded human beings too – people ready to handle the world, whether as an elite professional or not.

Inglethorpe has already overseen a 40 per cent reduction in player numbers at Kirkby, the aim of which was two-fold; firstly, to make it easier to spot and develop those with first-team potential, and secondly to avoid giving false hope to those who are never going to make it at Anfield. "Common sense," he says. 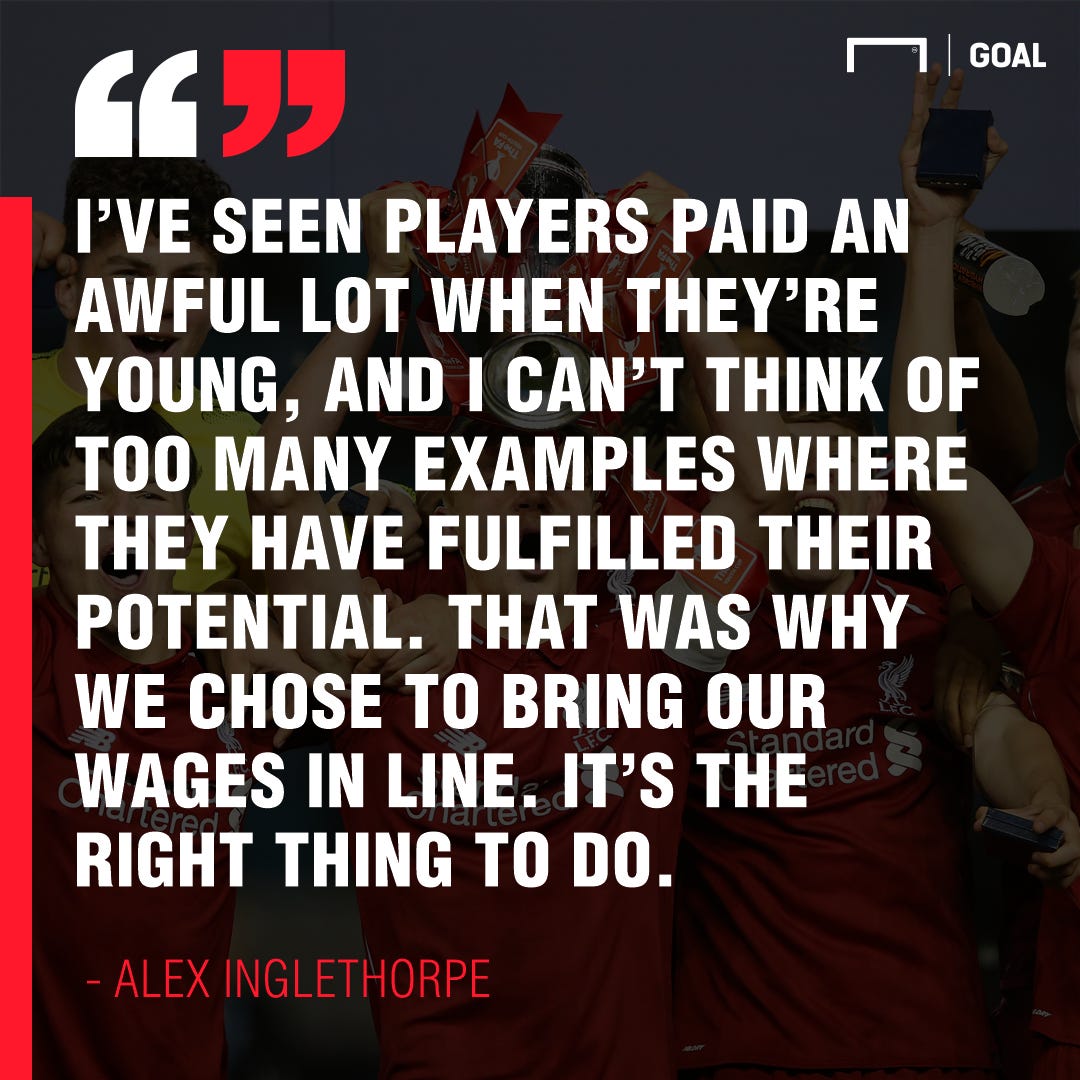 An academy salary cap of £40,000 ($47,000) a year has also been implemented, although those who progress rapidly to first-team level can expect to be looked after by the club.

“It’s the right thing to do,” Inglethorpe says. “I’ve seen players paid an awful lot when they’re young, and I can’t think of too many examples where they have fulfilled their potential.

“But I’ve seen players paid enough to live on, wages which kept them humble and hungry, those players, I have quite a long list of the ones who came through.”

The benefits of this approach can be seen in the development of players such as Jones, who made his U18s debut at 15 and who has now made nine senior appearances and enjoyed that moment against Everton, or Williams, an unassuming full-back from Wrexham who is now considered a genuine first-team option by Jurgen Klopp.

Both have been at the club since U9s level, and have been schooled in ‘The Liverpool Way’ – self-belief, yes, but also hard work and humility, an understanding of who you are and where you have come from. People first, players second.

Education forms a huge part of that process. Most of Liverpool’s academy players attend Rainhill High, a comprehensive secondary school around 10 miles away from Kirkby.

In-house, meanwhile, the club work hard to ensure players are educated on social, health, domestic and practical issues. Regular visits are organised, with players encouraged to read up and learn new skills, be it cookery or language. Classes are provided; the aim, staff say, is not only to educate and to offer essential life skills, but to provide perspective and an appreciation of others, and of the world outside.

In February, for example, a group of academy players visited Normandy’s Gold Beach, one of the five areas of the Allied invasion of German-occupied France in 1944. Prior to that, they had been visited by Bernard Morgan, a former RAF codebreaker, who recounted his World War Two experiences.

A week or so earlier, Barry Lewtas’ U18s squad had been in Walton prison, hearing from inmates about their lives and crimes, experiences and mistakes. It was, according to one staff member who was present, a moving, at times emotional, afternoon.

Such visits are intended to open the eyes of young players, to make them think about their life choices and appreciate their gifts. Being a footballer requires sacrifice and dedication, but so does working at the Jaguar Land Rover factory in Halewood, or being part of the army. Lewtas’ squad spent two days at the Weeton Barracks, near Preston, as part of their pre-season training schedule last summer. “A valuable experience,” says Roscoe.

Roscoe was formerly the academy’s head of education and welfare, before moving into his new role earlier this season. A couple of weeks prior to that Shrewsbury game, Goal ran into him at an U23s game.

What stood out was his knowledge of, and care for, those who had been with the club and since departed. He spoke of Sam Hart, a young full-back who had moved on in 2017 but who was now on loan at Shrewsbury from Blackburn, and of Jordan Lussey, formerly the captain of the U21s but now making his way with local side Marine in the eighth tier of English football. Adam Phillips, on loan from Norwich at Morecambe in League Two, was another player mentioned.

Liverpool’s aim is to have players like this dotted around Europe’s leagues, and in particular in England. Not just talented footballers, but solid professionals, grounded individuals, people with a handle on life. They take pride in the rise of someone like Conor Coady, the Wolves captain, or Jay Spearing, skipper at Blackpool. Ryan Kent’s form at Rangers is closely watched, as are the likes of Raheem Sterling, Jordon Ibe, Jon Flanagan, Andre Wisdom, Tom Ince and Jack Robinson. 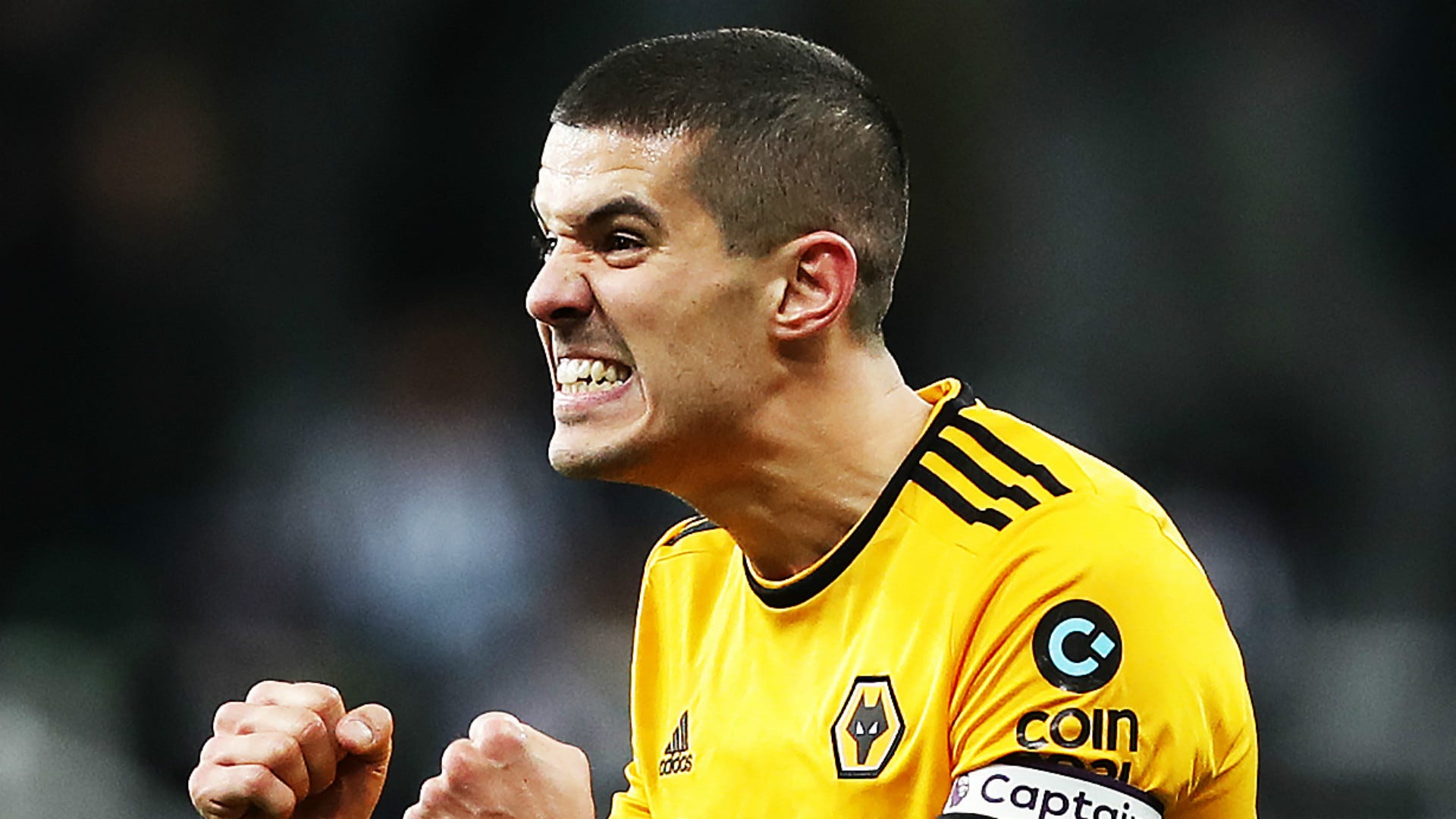 “Just because they don’t play here anymore, doesn’t mean we forget about them,” Roscoe said at that U23s game. That statement is perhaps best exemplified by the regular presence of Tom Brewitt, the Morecambe defender, at Kirkby.

Brewitt left Liverpool in 2017 but has now returned to begin what looks to be a hugely promising coaching career. The 23-year-old has been helping out Lewtas and assistant Jonathan Robinson with the U18s, and has also been taking evening sessions with the U13s and 14s. He has already achieved his UEFA B license, and hopes to complete his A license in the next 12 months.

Brewitt’s story featured in the first edition of a new regular newsletter which is to be sent to all Liverpool academy players, past and present. It aims not only to celebrate the successes of its former alumni but to offer help and support, to keep them connected to the club.

The presence of ex-players at Kirkby helps. Rob Jones, the former Reds defender, spends a lot of time with Lewtas and his U18 squad, while Steve McManaman can often be spotted at games. Heighway, meanwhile, was invited by Inglethorpe to return as a coaching consultant, working across all age-groups. His experience and wisdom has, according to sources, been an invaluable tool.

There will be significant changes at Kirkby this year. Critchley’s surprise departure to take the manager’s job at League One club Blackpool will prompt a coaching reshuffle. It is expected that the highly-rated Lewtas will move up to take charge of the U23s, with his assistant Robinson taking over the U18s group. Continuity is seen as key.

Beyond that, Kirkby is preparing for the arrival of Klopp and his senior squad who were, prior to the current coronavirus crisis, set to move into their new £50 million ($59.5m) complex this summer, bringing the club’s entire footballing operation on one site for the first time.

A key move, and one which should, in theory, only aid the progression of young players from academy to first team.

Not that Liverpool have been struggling in that regard anyway, mind.

The present is glittering, but the future looks pretty bright too.