The shot-stopper, who passed away on Friday at the age of 93, was one of the first in the role to use his feet as much as his hands

Comparing football teams across generations is generally a futile exercise but the River Plate side of the 1940s and 50s have a strong claim to be named the greatest South America has ever seen.

Boasting the talents of Alfredo Di Stefano, Nestor Rossi, Angel Labruna, Felix Loustau and Adolfo Pedernera among other historical idols, the Nunez club's forward line was dubbed La Maquina [the Machine] for its outrageous goalscoring ability. Just as crucial, however, was the man between the posts, one of the most talented Argentine goalkeepers of all time, whose ability with his hands and feet gave those further up the field license to maraud safe in the knowledge their net was safe.

Amadeo Carrizo passed away at home in the early hours of Friday morning, aged 93. News of his death provoked immediate mourning across Argentine football, as even the Millonarios' arch-rivals Boca Juniors paid glowing tribute to their old adversary of countless Superclasico battles.

The River idol spent more than 20 years at the Monumental, making more than 600 appearances and leading the side to seven Primera Division titles in their golden age between 1945 and 1957. But his influence went far beyond trophies; Carrizo did much to transform the role of goalkeeper, playing with his feet almost as much as his hands.

In that age the last line of defence was just that; a hapless, glove-less soul who stood motionless waiting for the enemy to approach. Even Carrizo admitted that his dream was to score goals, not stop them. “I always liked to play up front. Those up front are the ones who have fun,” he once confessed to Un Cano. “The goalkeeper stands there like a sap hoping he doesn't concede. When he does everyone is already criticising him - 'What did he do?' 'Why did he come out late?'”

The native of Rufino, Santa Fe province, however, broke the mould. As well as the last line of defence he was River's first man in attack, moving the ball on instantly with his feet to get La Maquina moving back up the pitch. On one infamous occasion, commonplace now, he found himself in possession when Boca striker Jose 'Pepino' Borello was bearing down.

The goalkeeper could have simply cleared the ball downfield, but instead he chose to drop the shoulder and dribble around his adversary before laying it off to a team-mate. River went on to win 3-0 and Carrizo earned the fury of the Xeneize faithful, but he insists that his victim bore him no ill will. “I was great friends with Borello, and he never felt hurt by that dribble,” he told El Grafico. “When I conceded a goal from a back-heel, a diving header or some trick I used to think 'he did great, what a player!' I liked it when my opponent accepted me for who I am and how I played.

“It was not something forced, I did it as a way out and because I had the ability to do it. Just imagine if I had cleared and smashed it into the guy next to me and it goes in the net, what a mess!” Decades before Rene Higuita, Jorge Campos, Manuel Neuer et al were running rings round forwards, Carrizo had no fear in taking on Boca's finest - in that 1954 season Borello finished top scorer in the Primera Division - and coming out on top. 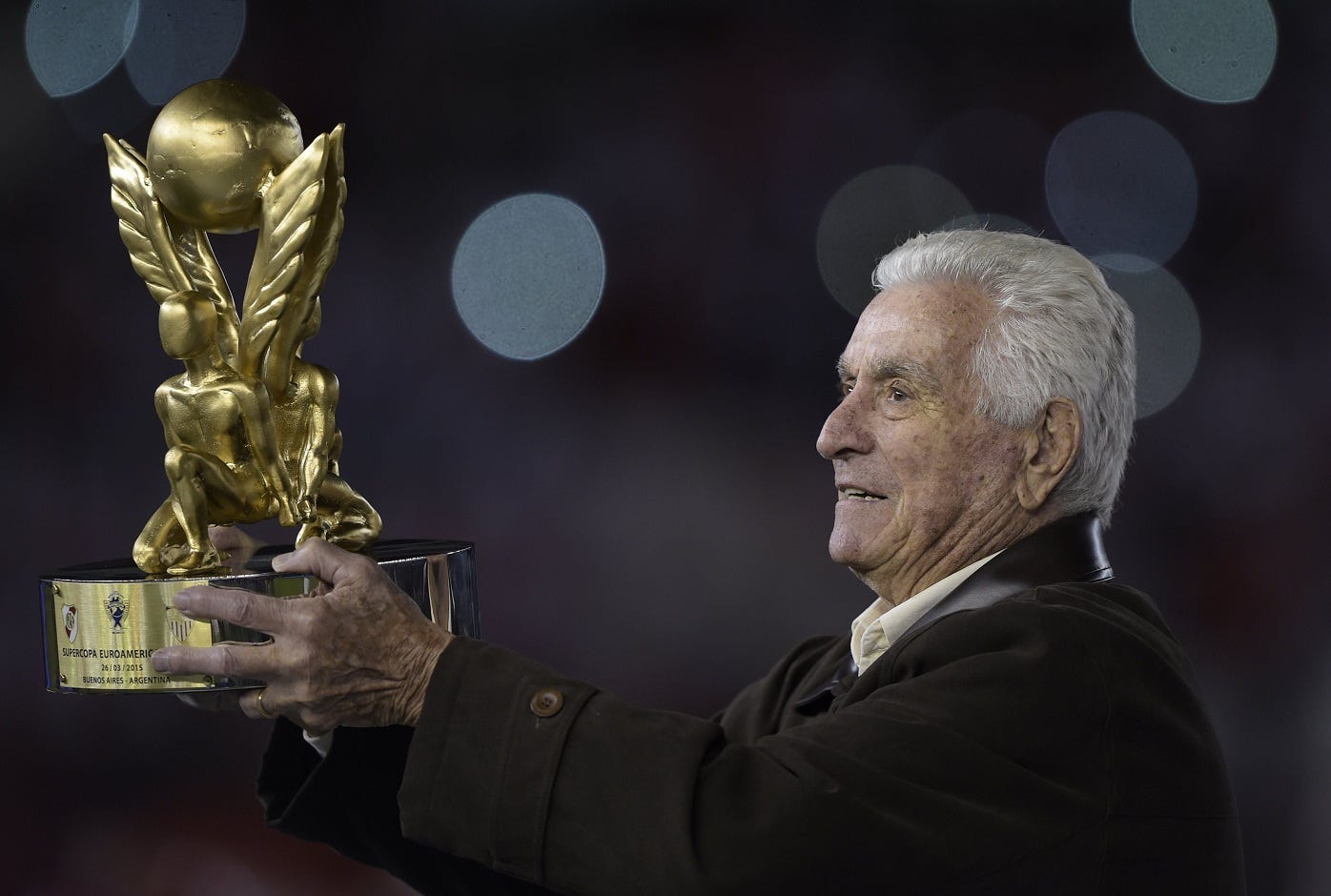 He was also not above using football's dark arts to gain an advantage, adding to El Cano: “Once I was up against Boca's Pedro Mansilla who was right on the limit but still on. I shouted at him, 'Offside!' and I took the ball back off him.”

The club's honorary president up until the moment of his passing, Carrizo played almost his entire career for River, having joined at the age of 16, finally leaving for Colombia's Millonarios in 1968 at 42 before retiring two years later in Bogota.

Supremely, and justifiably confident in his own abilities, Carrizo was equally comfortable rising for a deep cross – his trademark was catching that old, heavy leather ball with only one bare hand – as he was at scrambling and dropping his burly 1.90m frame to the floor in order to regain loose possession. That talent earned him 20 Argentina caps, although he had little to celebrate during his sole World Cup experience at Sweden 1958, when an Albiceleste side gutted by the defections of Omar Sivori, Antonio Angelillo and Humberto Maschio lost to Italy and featuring the 40-year-old Labruna in attack lost all three games.

The national team failed to give River's No. 1 the glory and joy he had in such abundance at club level but those who saw him play are in no doubt he was up there with the likes of Agustin Cejas and Ubaldo Fillol as the country's very best.

Carrizo's birthday, June 12, is commemorated as the Day of the Goalkeeper in his native Argentina, and the tributes that have poured out in the few hours since his passing are fitting for a man that may have been a River favourite but was also treasured across the football world regardless of club allegiance for his decency and professionalism; a ground-breaking goalkeeper who did more than most to change the role to how we see it today.