Coached by disgraced sprinter Ben Johnson and playing after presidential intervention to hide a positive cocaine test, Diego said goodbye on his terms

Exactly 20 years ago to this day, Diego Maradona said farewell to the world of professional football. The story that began on the parched wastegrounds of Buenos Aires' Villa Fiorito slum ended in the most incongruent of backdrops - the bowels of the Monumental Stadium belonging to Boca Juniors' and Diego's arch-rivals River Plate - minutes after the Xeneize had prevailed in the Superclasico by downing their adversaries 2-1.

That game, and its aftermath, drew the curtain on the career of one of the most talented and contradictory characters ever to star on a football field. And while hardly a fairytale ending for the troubled World Cup winner, the story of that final adios marked a fitting, if at times bizarre, conclusion for a man who had seemed destined to bow out of the sport he loved in scandal and ignominy. And most curiously of all, by rights Diego should not even have taken the field. 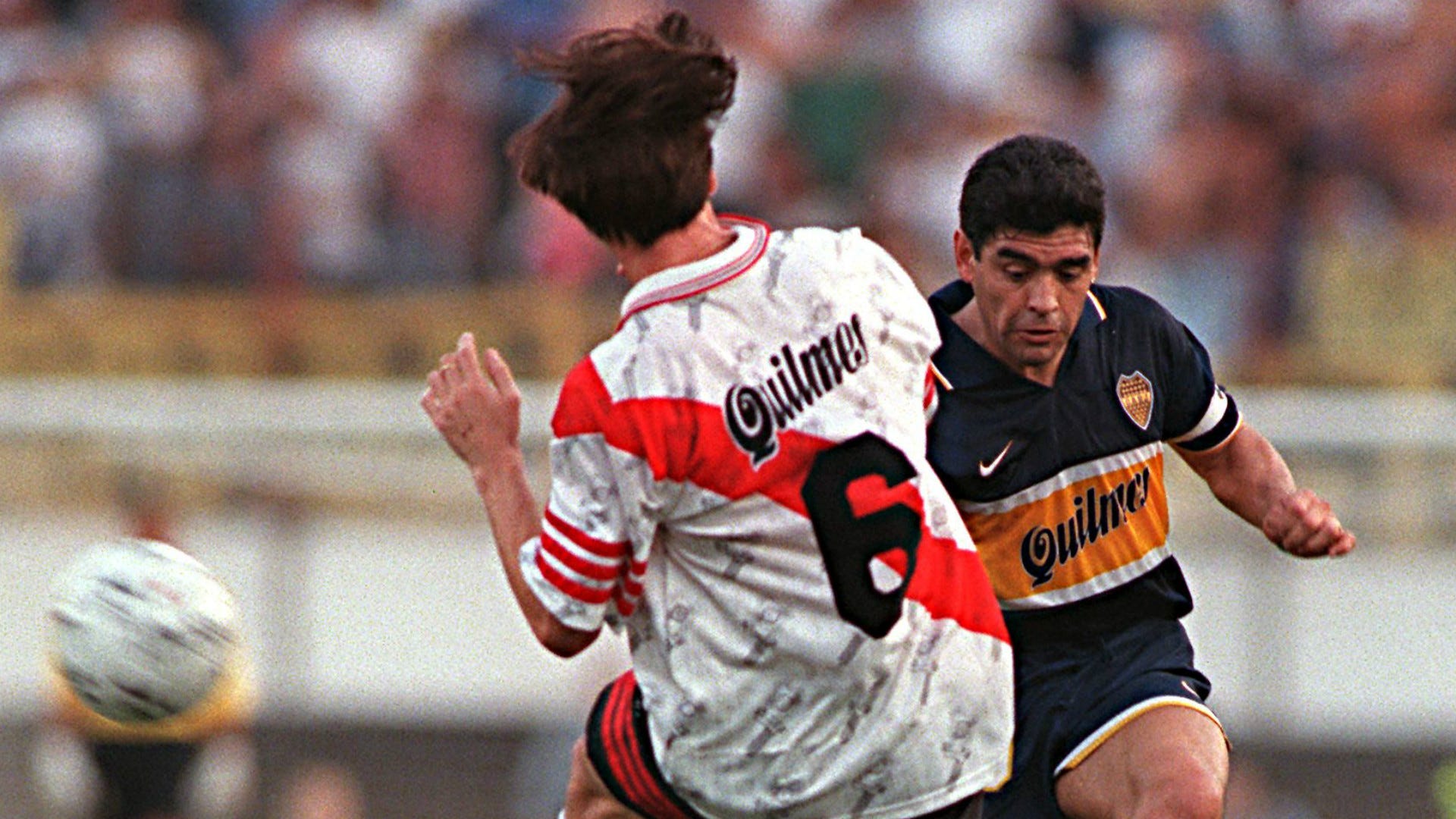 Mauricio Macri, the eldest son of an Italian immigrant who had amassed one of Argentina's largest fortunes managing hefty public works contracts, was the man leading the club. Macri had run for election at the Bombonera in 1995 as the first step towards cleaning up his public image as a spoilt, model-dating daddy's boy, a road that would later take him to the mayorship of Buenos Aires and, in 2015, the Argentine presidency itself. Success, however, proved elusive, and two years into his Boca tenure the club had failed to lift a single title. Under pressure to deliver on his grandiose promises, Macri turned to a Xeneize idol.

Maradona too was far removed from his glory days with Argentina and Napoli. The 18-month suspension handed down for doping offences at the 1994 World Cup had forced the star into coaching, sitting on the bench for Racing Club and Deportivo Mandiyu in two short, chaotic spells. Once the ban expired he had returned to Boca, but the move proved a fiasco. Out of shape and in the throes of a damaging cocaine addiction, Maradona lasted less than a year at the Bombonera before dropping out of football again. One of the few highlights was a passionate kiss shared with Claudio Caniggia during a Superclasico win over River. 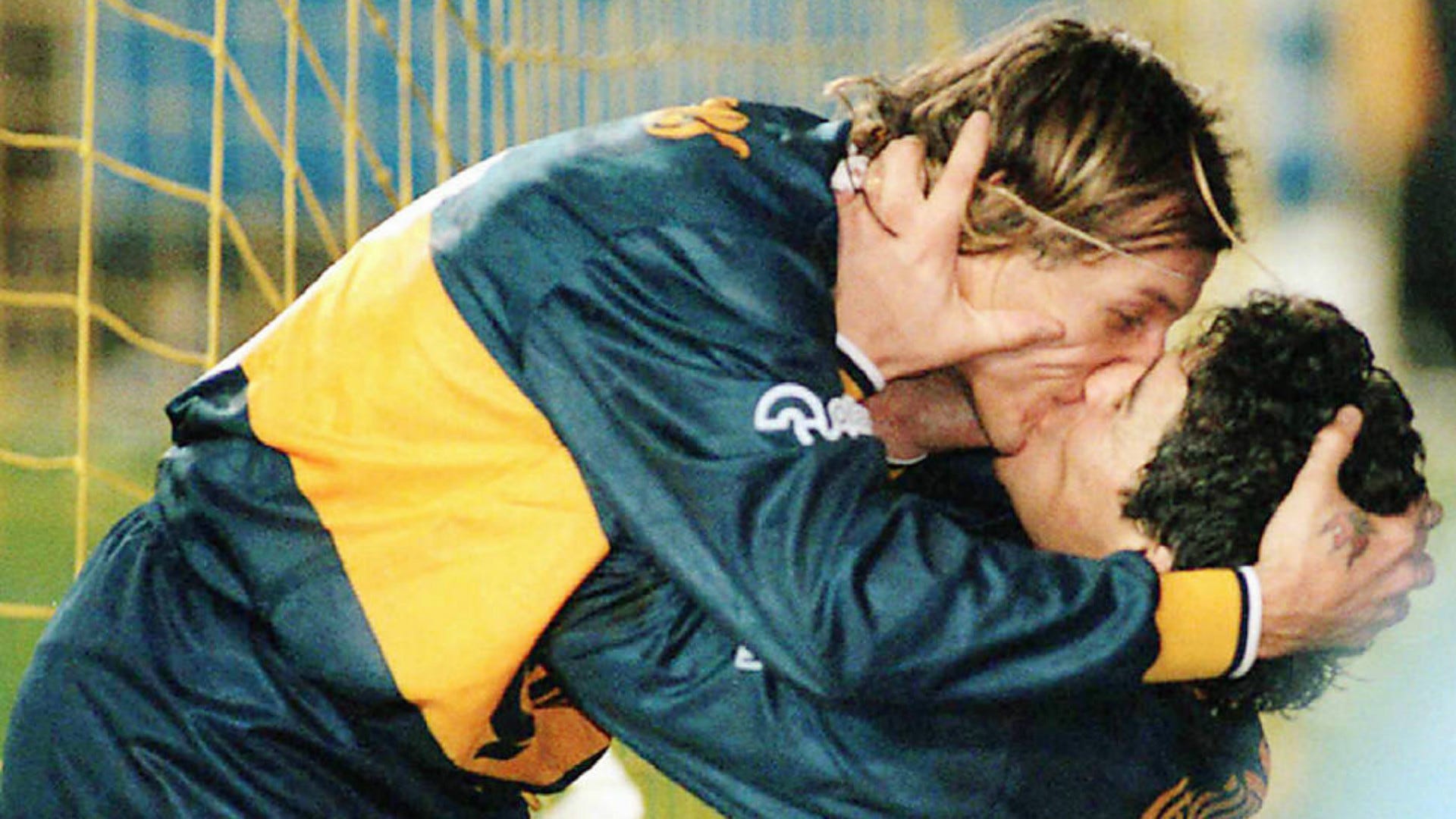 Speaking for a drugs charity in 1996, the ailing legend came clean: “Drugs are everywhere and I do not want kids to take them. I have two girls and I thought it best to say this, a father's obligation... I was, am and always will be a drug addict”.

Conditions, then, were hardly ideal for his comeback. Nevertheless, on April 21, 1997 and just two weeks after being rushed to hospital with hypertension, Maradona signed a new contract with Boca. The star was fresh from a spell in a Swiss rehab clinic and took to the pitch for the first time in July. He even hired a curious personal trainer to whip him back into shape: disgraced Canadian sprinter Ben Johnson, who had been found guilty of doping offences after winning gold at the 1988 Olympic Games.

“One day I turned up to training and Maradona was trying to install a treadmill in the Boca dressing room,” Hector Vieira, who coached the Xeneize at the time recalled. “He had Ben Johnson, he had Austrian masseurs, a Belgian fitness instructor.

“They couldn't get the treadmill into the dressing room, they had to break down a door. And I came in with the whistle around my neck, I said, 'The only person missing here is Don King!'”

Johnson, meanwhile, who for a while was convinced he was the reincarnation of an Egyptian pharaoh and also acted as personal trainer for late Libyan dictator Muammar Gadaffi, enjoyed a warm, if slightly fearful, relationship with his charge. “Don't ever cross him”, the ex-sprinter said to the Mail on Sunday . “He knows some serious people.” For his part Diego had no regrets about the link-up: in his autobiography he referred to Johnson as, “The fastest man on earth – no matter what anyone says.”

They say lightning never strikes twice in the same place, but that proved untrue for the duo. In August 1997 a familiar demon raised its head. After starring in a 4-2 victory over Argentinos Juniors Diego failed yet another doping test, showing positive for trace elements related to cocaine use. The fallout from that episode resembled a scene from the Stanley Kubrick classic Doctor Strangelove, with Boca, Maradona's agent Guillermo Coppola, the Argentine FA and even the government making a frantic series of telephone calls in order to protect the star from punishment.

According to an investigation published at the time in Clarín, both president Menem and Buenos Aires governor Eduardo Duhalde were following the case closely and offered to meet with Maradona to show their support. What is beyond doubt is that a federal judge's injunction ordered the AFA to refrain from imposing a ban on the star, due to alleged irregularities in the urine test that would be dismissed months later. “An exceptional person deserved an exceptional solution,” Duhalde said at the time, while the player's former agent Jorge Cyszterspiler was more direct: “A whole country revolves around Diego. He brings in the television, he fills a stadium, he lifts the people.” 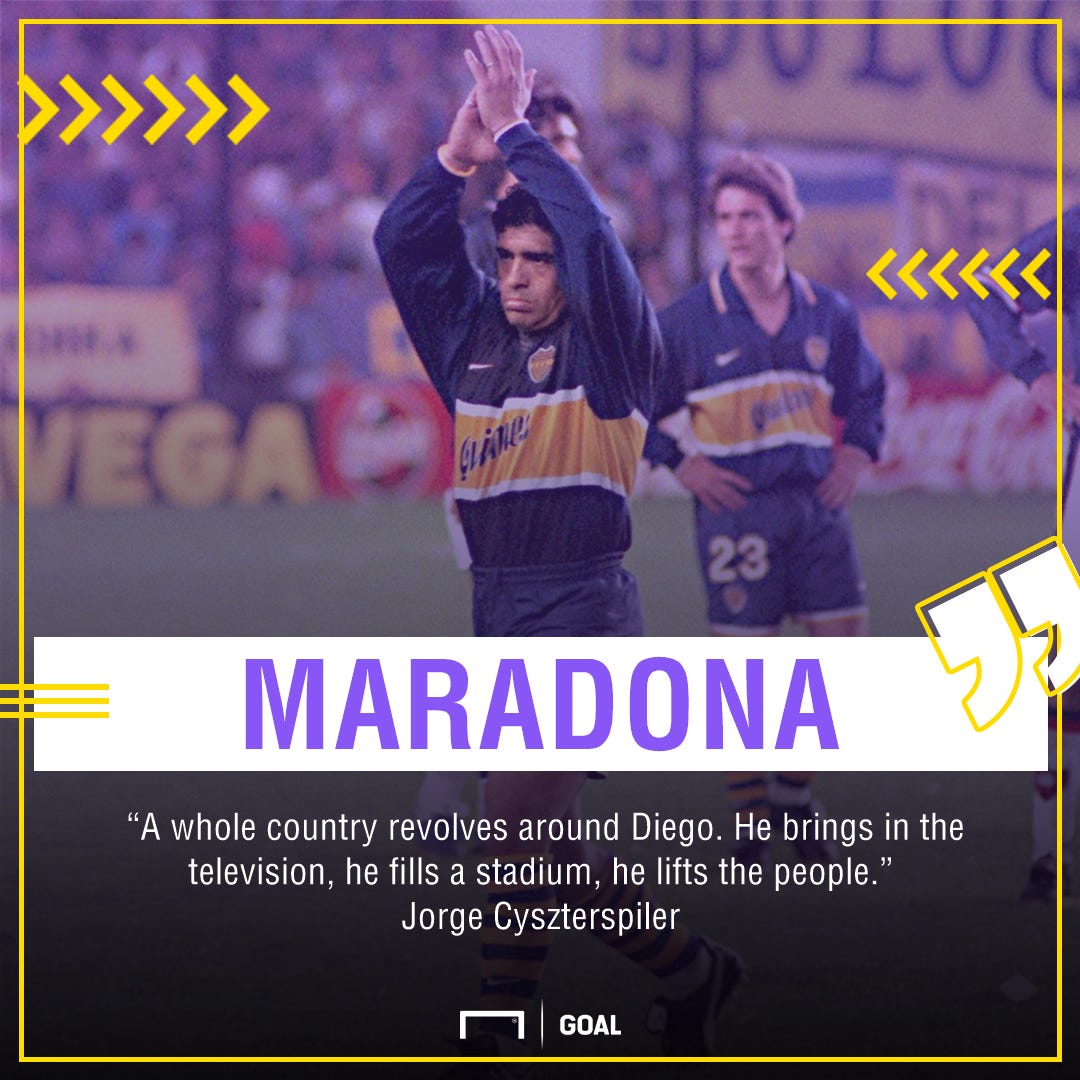 So it was that Maradona was cleared to play once more. But ill fortune continued to plague him. In a Supercopa game against Colo Colo he suffered an injury that sent him once more to the sidelines, and little by little it began to dawn on him that his playing days were all but over. El Pibe de Oro, typically, decided to bring the curtain down on his own terms. The Superclasico would be his final flourish, the perfect end to a saga that had lasted more than 20 years since his debut as a fresh-faced, afro-sporting teenager at Argentinos.

It was far from a vintage performance. Maradona struggled to get into the game, and was powerless to act as Sergio Berti put River ahead in the Monumental. At half time Vieira shuffled his deck, and Diego was taken off. Popular folklore has his heir-apparent, 19-year-old Juan Roman Riquelme, entering for his fellow No. 10, but the Boca team sheet that day shows Claudio Caniggia as his replacement – Riquelme came on at the same time, but for Nelson Vivas.

Diego stayed on the bench, directing a few less than complimentary gestures at the Millonario fans as goals from Julio Cesar Toresani and Martin Palermo sealed a famous victory for the visitors. “Boca played like Boca and River were River. They played a great first half and then their panties fell down,” he fired at the final whistle, one of the countless phrases that have passed into the annals of football legend. Days later, on his 37th birthday and dogged by reports of the failed drugs test so carefully concealed, he officially hung up his boots, never to return as a professional.

Maradona never completed his formal education, getting as far as his first year of high school before dropping out to focus on football. But he has nevertheless made almost as grand a contribution to the Spanish language as the likes of Cervantes, Borges and Garcia Marquez with his unique take on the world. In 2001, four years after that last game, he finally played his official farewell at the Bombonera in a testimonial clash. There he uttered one of his most famous statements: “Football is the healthiest and most important sport in the world. I have made mistakes, and I have paid, but the ball cannot be stained.”

For better or for worse, Diego did things his way from start to finish, and nowhere is that more evident than in the way he signed off in typical fashion, baiting a rabid Monumental and celebrating another win for his beloved Boca.