After being drafted into the NWSL by Kansas City as the 35th pick, the defender has had to deal with devastating setbacks to get where she is today

For female soccer players in the U.S. college system, the NWSL is almost like the promised land.

The only professional women’s league in a country that has won more Women’s World Cup titles than anyone else, it is home to some of the best players in the world.

However, with just 12 teams, getting a contract isn’t easy.

When Rashida Beal was drafted into the NWSL by FC Kansas City back in 2017, as pick No.35, her attitude was “pretty realistic”.

Among the stars of the Kansas City team she was to join were Becky Sauerbrunn, now the U.S. women's national team captain, and Desiree Scott, an Olympic gold medallist this past summer with Canada.

“It was really intimidating,” she tells GOAL. “Looking back, I definitely got in my own head about it because by my senior year [in college], I felt very comfortable.

“And then I walk in there, where [there's] Sydney Leroux, Becky Sauerbrunn, Yael Averbuch – really talented, really well-known players and that was definitely intimidating.”

Beal didn’t make the roster, which was only big enough for 20 players at that time, but was kept as a reserve player and would train along those big names for an incredibly valuable experience.

“Becky Sauerbrunn still is one of my favourite players to watch,” she says. “Just the composure she has in that center-back position was something I really looked up to.

“In general, the defenders on that team were very technically gifted and that is not my strong suit, so I was like, 'Wow, this is crazy!'

“Seeing players like Becky and Yael with that technical composure in the center-back position was really impressive and I was a little starstruck, for sure.”

It wasn’t just the defenders that helped Beal learn, either.

“At that time, Sydney Leroux was only about six months out of her first pregnancy,” she recalls.

“She was working back and was someone that was very helpful and encouraging, giving me tips and advice. Obviously, if I'm going against her in practice, she has things to say.

“Becca Moros, who's now coaching, she was really helpful, helping me do extra work and things like that.

"There was no shortage of experienced players that were willing to help, give advice and give feedback. That was one of the best things about the environment.”

Beal’s plan was to look for an overseas move, to improve her game in another way.

“But I had many different life events that kind of threw that off course,” she explains. 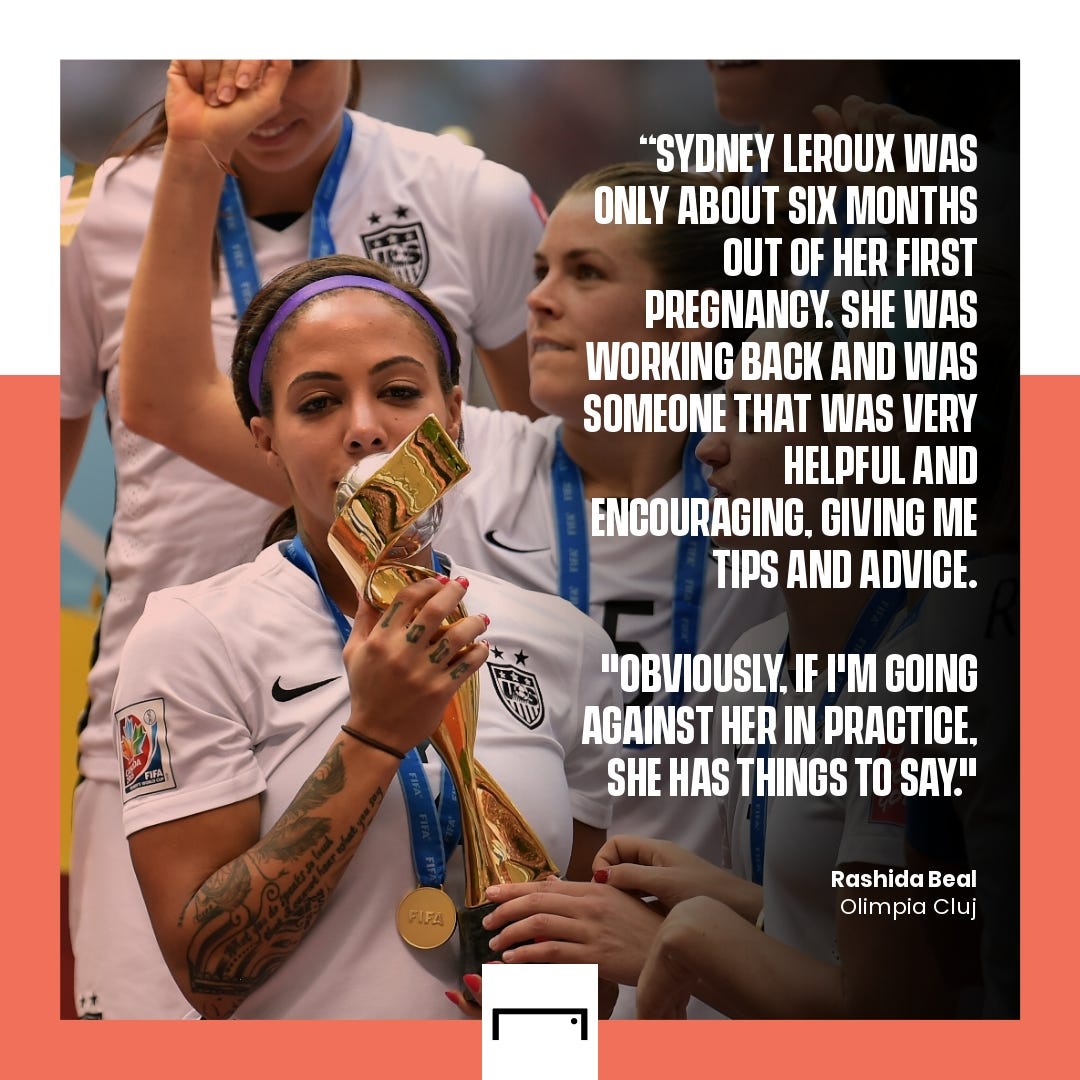 Tendinitis developed in her left knee in her senior year of college, which got much worse while she was pushing to impress in Kansas and led to a partial tear in her patellar tendon.

After building her way back for six months, she would then tear three ligaments in her knee after a tackle during a training session.

“I cried at almost every doctor's appointment because I was like, 'Maybe I can do this now!' And [I was told], 'No, you're not ready,'" Beal remembers.

“That was a very long process. I didn't jog for five months. I didn't sprint for probably seven. I got cleared at 10 months, but I still had six weeks of return to sport protocol.

“Essentially, it was nearly a year before I was playing again and then I actually think almost right when I got cleared is when I re-tore my meniscus – but it wasn't confirmed for a while.”

That was another setback and had it not been just a trim of the ligament that was needed in her second surgery, she says she would have been “done”.

But she isn’t done. After getting over obstacle after obstacle, Beal’s path has taken her into the Women’s Champions League with Olimpia Cluj, the Romanian champions.

After going through some real mental battles to get to this point, there is one question that GOAL has to ask: what pushes her not to give up?

“For one, that's just never been my personality,” Beal says. “I have a few things that I'm really passionate about and nothing can get in the way of them. 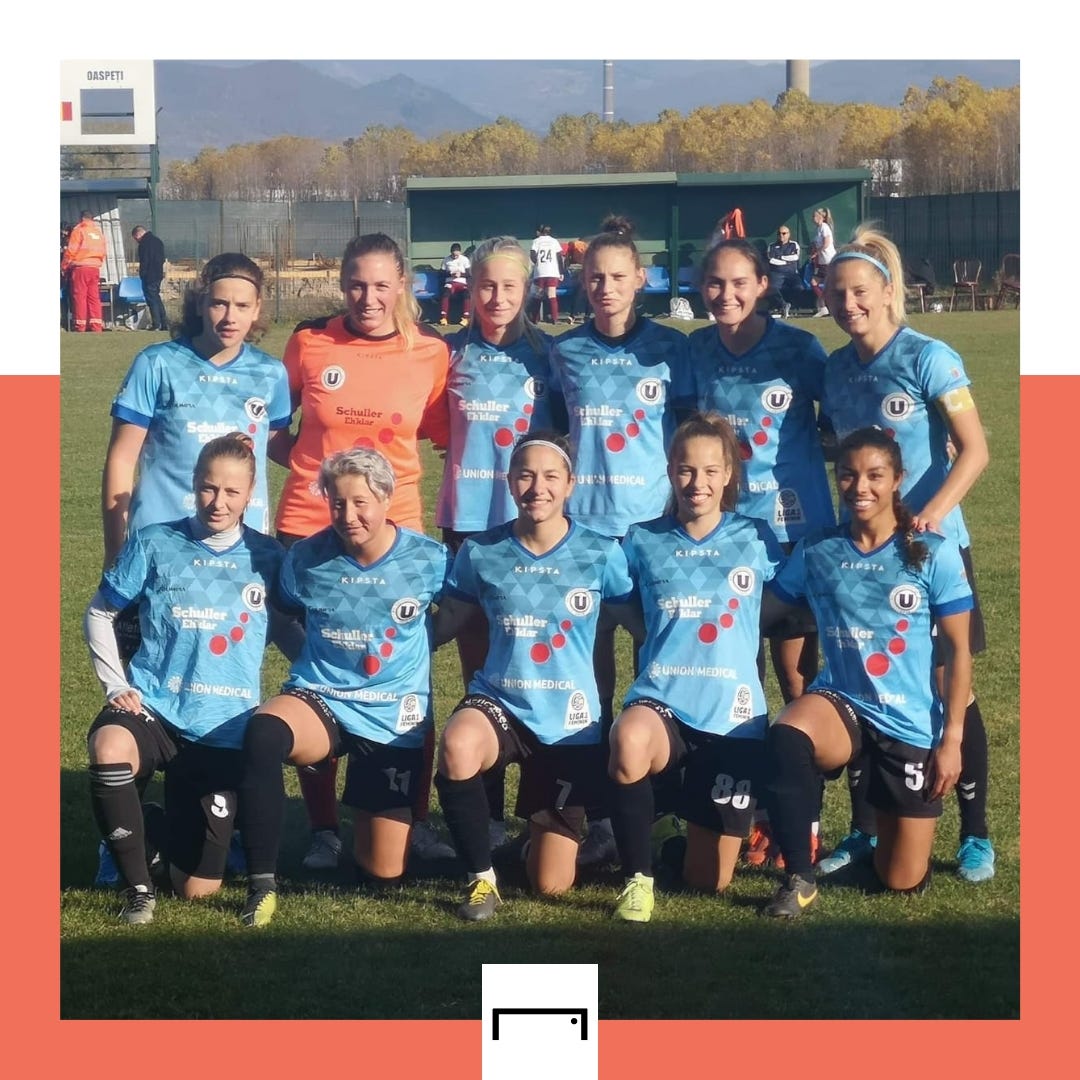 “I also went through moments of very difficult challenges, especially my freshman year in college, and it's just never been in my DNA to give up – not even to give up easily, but to give up at all.

“I just felt I couldn't stop playing until I did what I wanted, what I set out to do. Right now, my sights are no longer on NWSL. That's just not where my goals are.

"But playing professionally was still one of them and so I just felt unfinished.

“Then another thing is, you may have heard people talk about, ‘What's your why?’ You kind of have to have something deeper pushing you and I think a big thing is my younger brother.

“That's why I left Kansas City, because my younger brother had gotten into a fatal motorcycle accident. It was not immediate. He was in the hospital. My parents had to take him off life support.

“It was very traumatic and at his memorial, his friends came up to me and were like: 'Oh my gosh, he was so proud of you. You were in Kansas City playing with this professional team. He told everybody you were a professional player.'

With that incredible force driving her, Beal’s European adventure continues to propel her towards goals that have changed a little from when she was younger.

“I've thought a bit about, 'Well, what's in my control?'” she explains. “I want to be in a competitive environment with good resources and enjoy it.

"I obviously want to play at the highest level that I can. I don't know exactly what that is, where that is.

"So, I'm trying not to focus too much on those kinds of things and just focus more on continuing to improve as a player.

“Just reaching my max potential, I guess, is as simple as it is.”