Chelsea assistant Gianfranco Zola admits that Eden Hazard and manager Maurizio Sarri are having to work together to reach a compromise over his role in the Italian's system.

Sarri admitted that Hazard was among the players in the group who had stopped having fun after his side returned to winning ways in Thursday's penalty shootout Carabao Cup win over Tottenham, booking a place in the final of the competition.

Hazard's favoured position is left wing, but he has been used as a central striker in recent weeks as Alvaro Morata looks set to move to Atletico Madrid and Olivier Giroud is increasingly being left on the bench.

Zola revealed that the duo are working on a compromise to keep Hazard free to find space to attack, but also instil some discipline to enact his manager's new system which has been dubbed 'Sarriball'.

"I was very much like Eden," Zola said before Chelsea’s FA Cup clash with Sheffield Wednesday on Sunday.

"I was a very positive player, I liked to move around the pitch, find the spots on the pitch where I could receive the ball, turn and make the damage to the opposition.

"I was very very similar and I do understand that. I believe we try to give him this but also to be an organised team defensively and offensively. Especially offensively. That's why we ask Eden sometimes to put himself about in working hard.

"I know that's not his best quality. We understand that sometimes he needs to be fresh when he receives the ball. There is no doubt that we are on the same page. We want to find a common ground where he can get the best out of himself and the team can benefit from him.

"Not only when he is scoring goals but when we have moments in the game where we need everybody to defend and everybody to press. That's exactly what we are trying to do. Eden, I think, I have to be fair that he has been doing it.

“We are very demanding because we want to do it all the time. I am sure that we will find a compromise. I am not in a position to criticise a player like Eden. We believe, Maurizio said one thing, that the potential of Hazard is greater than the performances.

"So he is not criticising what Eden is doing but he believes he can do much more for himself and the team. That's all he is saying. This is the situation he wants Hazard to understand. Again, when we see his performances we look forward to seeing more and more." 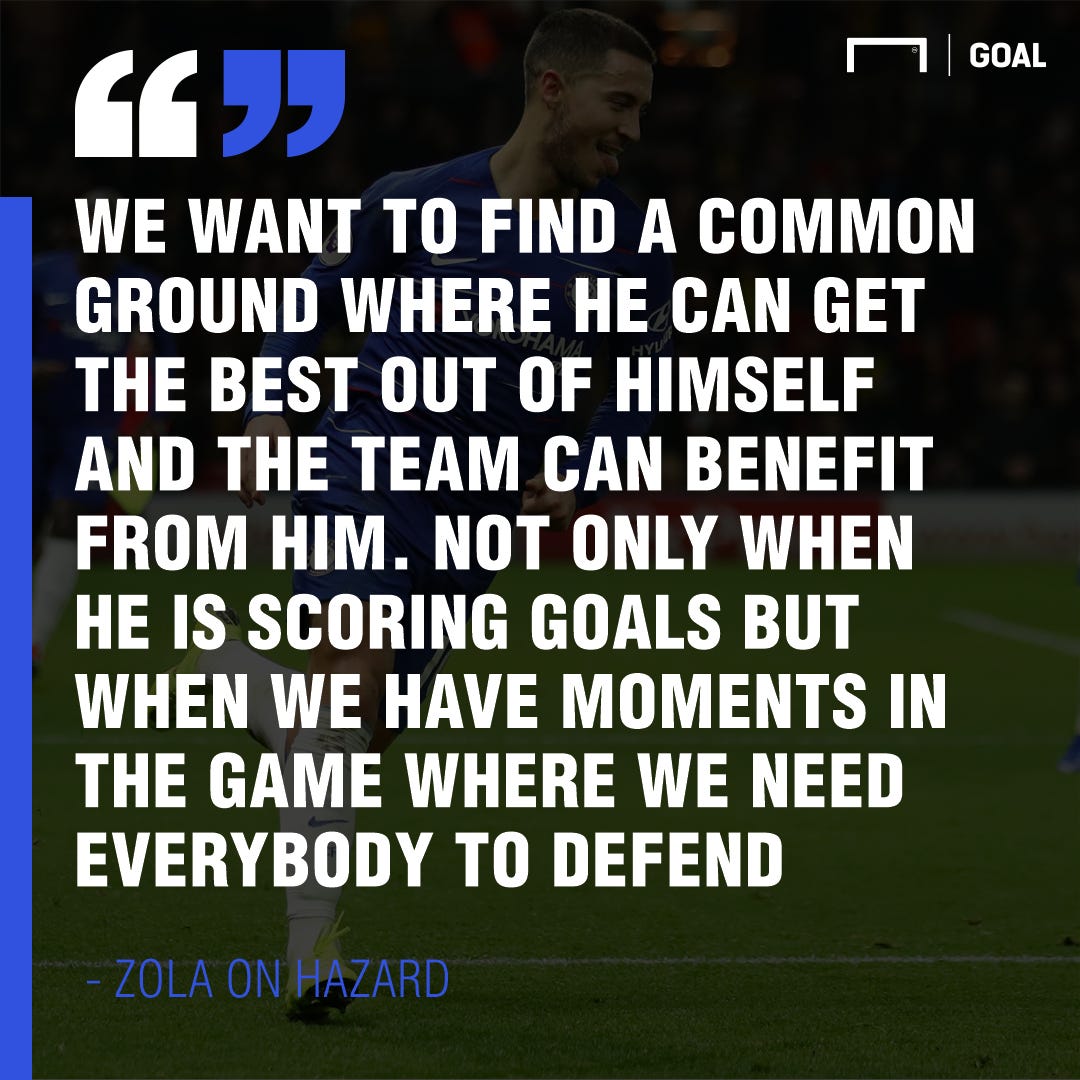 Sarri had also called out Hazard for not reaching his full potential ahead of Thursday's semi-final clash but the 28-year-old's response was a man of the match display.

Like Hazard, Zola was a creative influence on Chelsea in his playing career and is widely regarded as one of the club's greatest ever players. He watched on at Stamford Bridge as Hazard returned to a wide left position with Giroud at striker, and admits that having that pivot helps small, creative players.

"It was very very similar to when I first came here," Zola added. "I had Mark Hughes or Luca Vialli, who when I could play off them it was much better for me because it would give me the space and freedom. I would use their physicality to get the spaces I wanted and we played fantastically so I understand for Eden.

Higuain could be set to make his debut in the FA Cup this weekend and Chelsea go into the match having eased some of the mounting pressure, after beating their rivals to book a Carabao Cup final date with Manchester City on February 24. 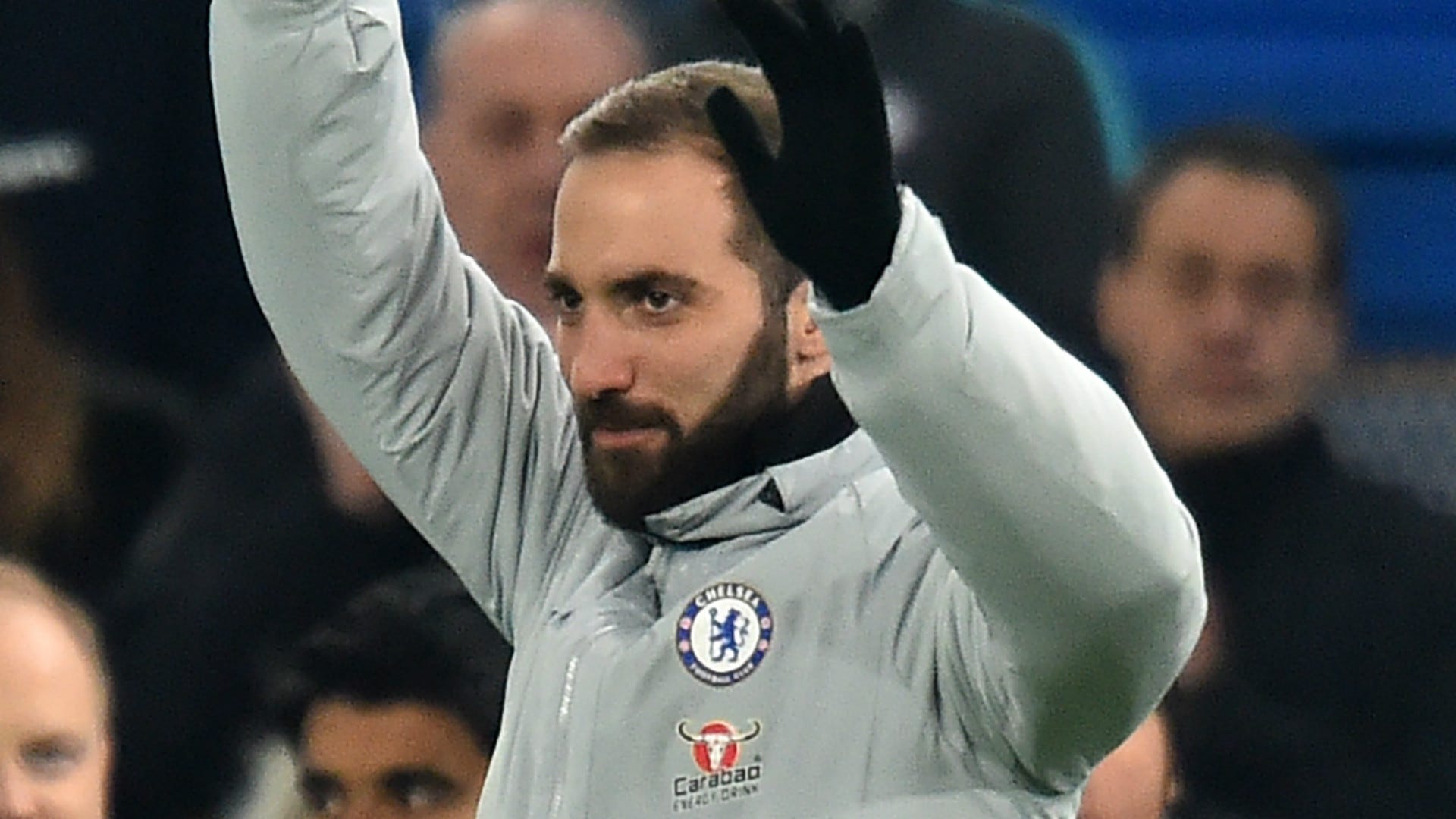 Sarri's methods with Chelsea have come under scrutiny, particularly for his use of players like Hazard and N'Golo Kante in positions that may not be their strongest.

Zola says Sarri hears some of the noise from outside of Chelsea but that he is trying to balance his need to adapt with his own style as a manager.

"We know what the game is all about," Zola said. "Maurizio has got his own temper and character but he is a very intelligent person. I believe his intelligence is superior to his temper. He is learning. Trying to keep his personality.

"He is adapting to the situation. I understand that Chelsea is a team that has huge expectations from the supporters, the media, from the owners so we need to meet those expectations. When you lose a game like against Arsenal there is always something going on.

"You have to accept the criticism and we are accepting it and work out the situations to be better. Sometimes in a strong way like Maurizio was after the game against Arsenal, he criticised some things. But, like I said, sometimes the reaction means that you care and you want to be on top."