The 18-year-old scored three goals in the quarter-final to sink Gremio, bringing back memories of the Brazilian side's triumphant 2011 campaign

Inspired by the dazzling talents of Pele, Zito, Pepe and Coutinho to name just a few, Santos hold a strong claim to the title of possessing the first great Copa Libertadores team.

Once the golden era of the 1960s ended, however, the club had to wait for the good times to return.

After decades of under-achievement, the Peixe finally began to establish themselves back among Brazil and the continent's elite this century, culminating in further Copa glory in 2011 as they ended a run of 48 years without picking up the coveted trophy.

A young Neymar, well on his way to mega-stardom, proved the catalyst behind that successful campaign.

And now, nine years further down the line, a new sensation bids to follow in the footsteps of Santos' favourite sons: 18-year-old Kaio Jorge, one of the principal architects of their entry into the Libertadores semi-finals in 2020.

While the Olinda native had already found himself in the spotlight over the last 12 months thanks to his performances in a breakout season at Vila Belmiro, it was against Gremio in December that he ensured his name would not soon be forgotten.

Indeed, having already netted his side's sole strike in the first leg of the quarter-final, he needed just 11.4 seconds in the reverse fixture to make his mark, chasing down a misplaced pass with an astonishing turn of speed straight from kick-off and sliding the ball home from an impossibly acute angle to give his side the best possible start.

🤩 The best sequence of the week! Another look at the wild first few minutes between @SantosFC and @gremio_en !

😱 #Santos scored 11 seconds into the match, and that was just the beginning! pic.twitter.com/CstXue5Zq2

Kaio's second of the match was rather more fortuitous, a mishit strike which somehow span over the line to the bemusement of stunned Gremio keeper Vanderlei.

But it nevertheless led Santos to a famous victory, and their first Copa semi-final since Neymar's famous run almost a decade ago as the Peixe triumphed 4-1 on the night and 5-1 on aggregate, with their new wonderkid scoring no less than three of the goals across the two games.

The comparisons with Neymar are as inevitable and irresistible as they are unwelcome for a player of such tender years. Kaio closely resembles his hero in his stunning technique on the ball and eye for goal, as well as his shameless love of infuriating and humiliating defenders with his repertoire of tricks.

Santos coach Cuca has utilised Kaio across the pitch in 2020, starting the teenager out wide, as an attacking midfielder and in a false nine position. 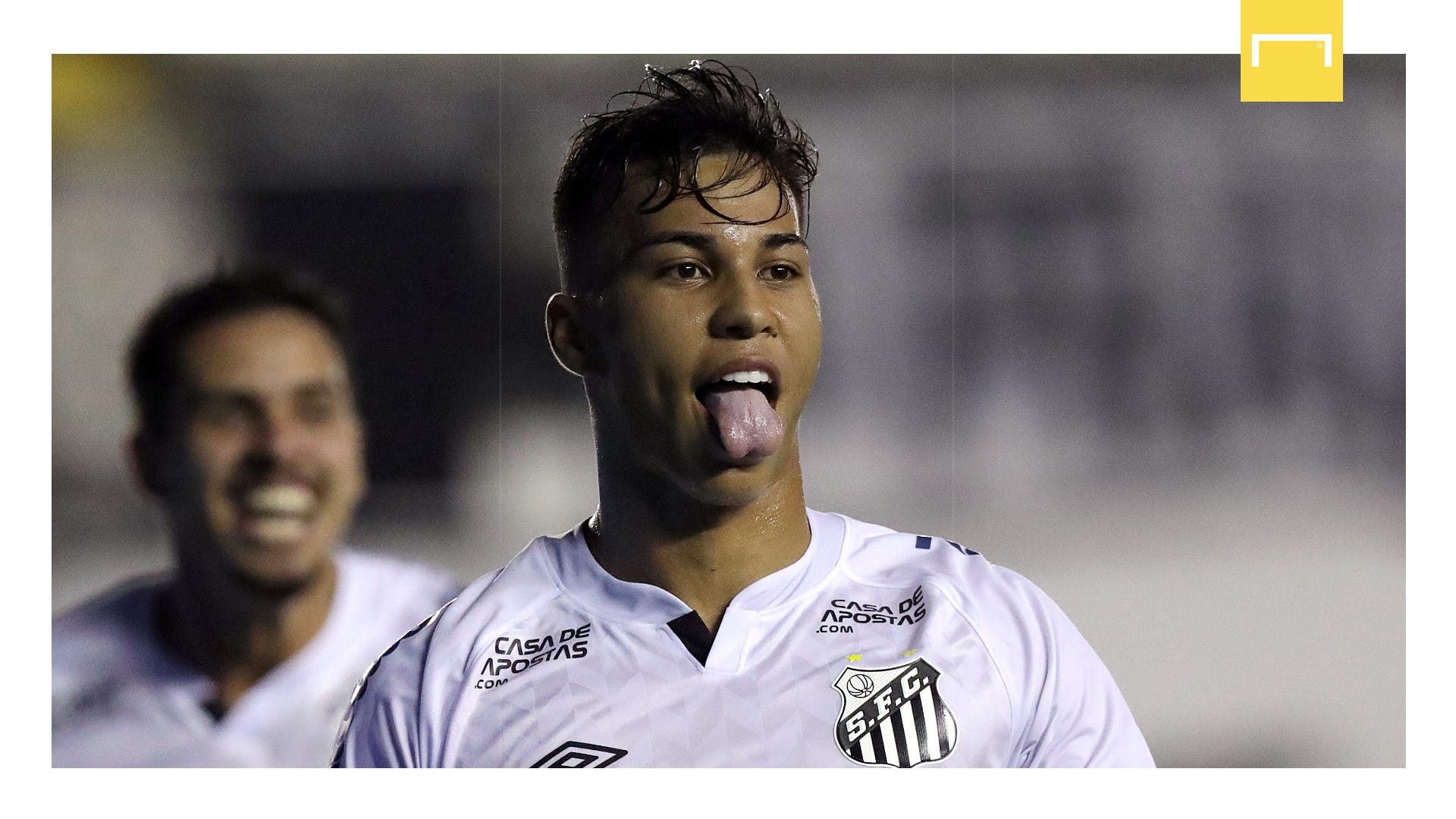 His versatility is another great, natural asset, as he explained to Santos TV earlier this year: “I passed my Santos trial as a playmaker, No.10. With time I moved into attack. I've played centre-forward for the last three years.”

With five goals to date in the current Libertadores, the teenager is behind only Barcelona SC's Fidel Martinez in the top scorer ranks. Another strike in the last four or final would see him match Neymar's 2011 tally, which proved vital in breaking that near-50 year drought and clinching a third title for the Peixe.

“I am so happy, we have been working from the beginning of the year to be here,” Kaio beamed to reporters following his heroics against Gremio. “In 2011 I was watching Neymar on TV and now I am here, scoring goals.”

Kaio grew up in the technique-intensive world of futsal and, after moving down to Sao Paulo from the north-east of Brazil, was just 16 when he made his full Santos debut – once more following the likes of Pele and Neymar in making an impact at an early age. 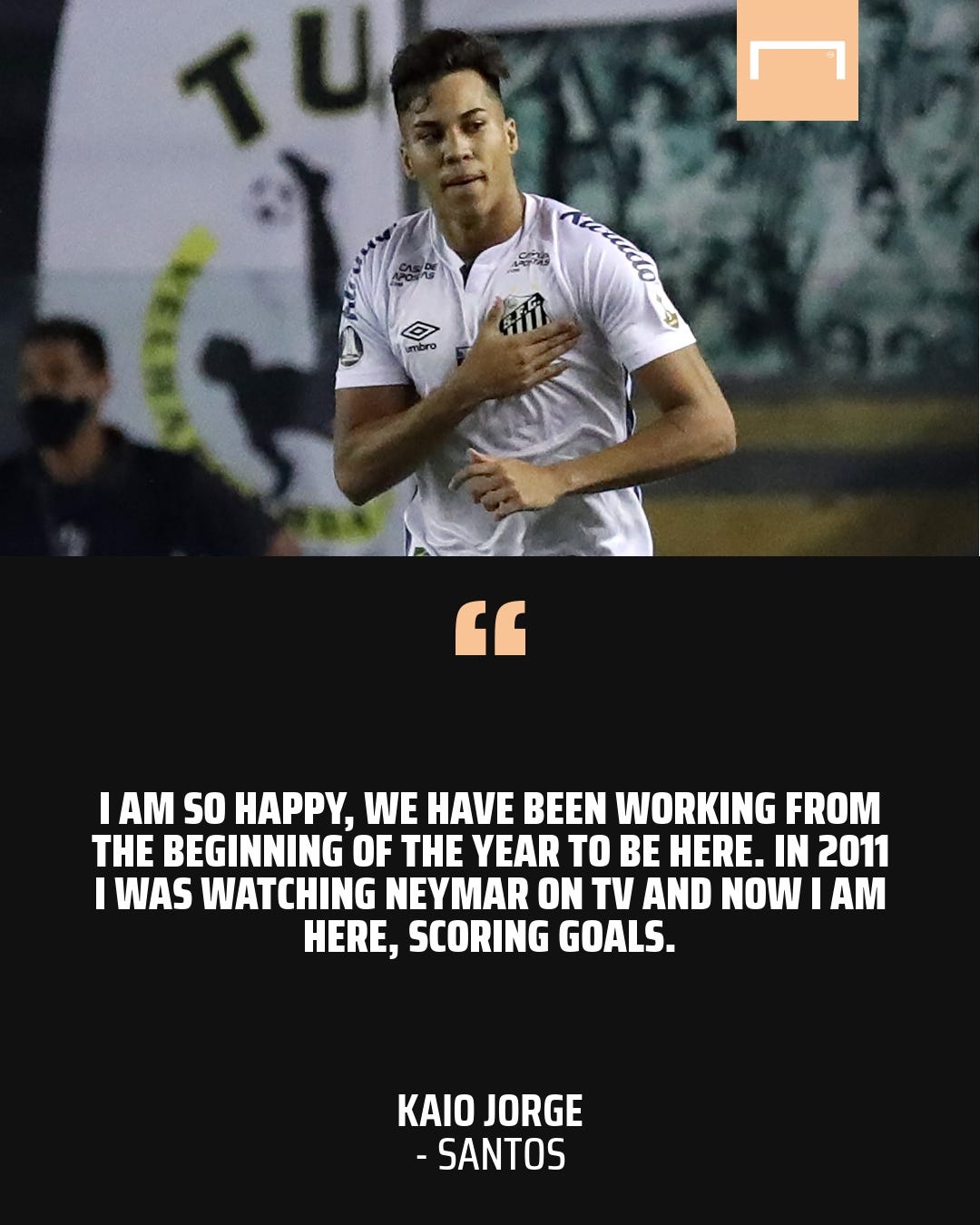 It remains to be seen, though, just how long Cuca will be able to retain his services.

As reported by Goal, Juventus have been monitoring his progress since the start of 2020 even before his Libertadores heroics, while Real Madrid, who have repeatedly exploited the Brazilian market in recent years with the signings of Vinicius Junior, Reinier and fellow Santos alumnus Rodrygo, have also seen their name emerge in connection with the forward.

For now though, after dispatching Gremio, Santos and Kaio's minds will be wholly focused on Wednesday's crucial first leg against fellow historic Libertadores heavyweights Boca Juniors.

A strong result in the Bombonera would leave the Brazilians well-placed to reach the final on January 30 at the Maracana, where either River Plate or Palmeiras will lie in wait, with the Brazilian side 3-0 up after Tuesday's first leg in Argentina.

Whether the Under-17s World Cup-winner stays beyond the end of January will largely depend on what happens in these coming matches, as well as if the Peixe can secure Libertadores qualification for 2021.

But it appears to be only a matter of time before Kaio is making the familiar move across the Atlantic to try his luck at one of Europe's elite clubs; and while he has a long way to go before he can hope to live up to the reputation of someone as accomplished as Neymar, the teenager is making all the right noises as he leads his side's charge for what would be a dream fourth Copa success.