The forward still boasts a great strike-rate but his ratio has fallen since moving to Turin, and another Champions League win looks unlikely right now

This year's Goal 50 was unveiled on Tuesday and Cristiano Ronaldo finished in fifth place.

It is a high ranking – yet the attacker's lowest since 2010, when he came ninth.

Of course, that fact primarily underlines Ronaldo's remarkable consistency over the past decade. Between 2011 and 2018, he never failed to make the podium and took top spot four times.

Ronaldo even made history in 2017 by becoming the first man to successfully retain the title of the world's best player, and was only denied three in a row by then-Real Madrid team-mate Luka Modric. However, the Juventus forward fell to fourth in 2019 and dropped a further place this year.

So, are we witnessing the slow but steady decline of one of the finest footballers ever to play the game? Is time finally catching up with the 35-year-old?

He is still making history, of course.

Last season, Ronaldo netted in a record-equalling 11 consecutive Serie A appearances and ended up with more goals (37) in all competitions across a single campaign than any other player in Juve's history. And in just 46 games, too.

As it stands, he has struck 71 times in just 94 outings for Juve in all competitions. It is the kind of strike-rate that almost every player on the planet would envy.

However, Ronaldo holds himself to a higher standard than mere mortals. We are talking about a player who scored an unbelievable 450 goals in just 438 appearances for Madrid.

In total, he broke the half-century mark in six successive seasons at Santiago Bernabeu. Even when he bowed out, in 2017-18, he did so after 44 goals in 44 games.

What's more, 15 of those strikes came in just 13 Champions League matches, as Madrid lifted the trophy for a third consecutive year.

Since moving to Juve, though, Ronaldo has proven, thus far, unable to replicate such outrageous feats.

There have been back-to-back Serie A titles, but they no longer count for much at a club that had already won seven in a row. The objective was always European glory and Ronaldo has yet to win a Champions League. Or even a Capocannoniere award.

He ran Immobile close last season, of course, but both men relied heavily on penalties. Twelve of Ronaldo's 31 Serie A goals came from the spot, while Immobile's record-equalling tally (36) was propped up by 14 penalties of his own.

The 'Penaldo' nickname is frankly ridiculous, but there is no denying that the Portugal international's numbers at Juve have been bolstered significantly by spot-kicks.

Nearly a third of the goals he has scored in all competitions since moving to Turin (31.4 per cent) have come from 12 yards out. For context, Goal 50 winner Robert Lewandowski has netted 37 more goals than Ronaldo since the start of the 2018-19 season, but five fewer spot-kicks. 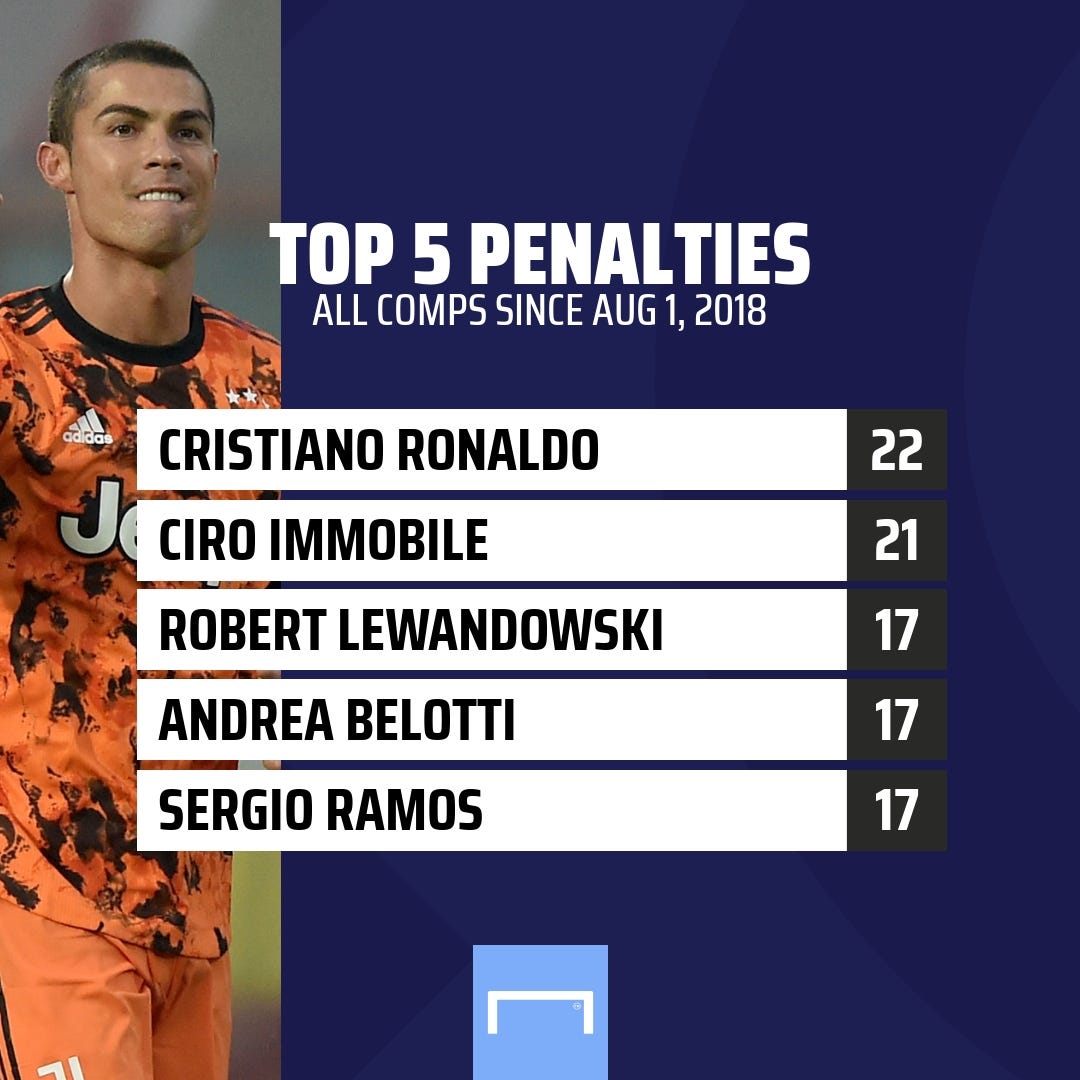 Is Ronaldo's increasing reliance on penalties all down to him, though? Is his goals-to-game ratio dropping because he is feeling the effects of time? Or because he is playing for a weaker team?

Ahead of Dynamo Kiev's recent meeting with Juve, legendary coach Mircea Lucescu was asked about the constant comparisons between Ronaldo and Lionel Messi.

"They're both really strong players, but they're different," the Romanian told UEFA's official website. "Messi is a short player who is exceptional in tight spaces because of his acceleration, dribbling and all that.

"Ronaldo is a different kind of player because he loves to score so much that he needs bigger spaces. He needs everyone's help, his team-mates' help. Messi can do a lot of things on his own."

Messi cannot do everything on his own, of course; we have seen that at Barcelona over the past year while he has grown increasingly dependent on penalties himself this season.

However, the Argentine's enduring genius still propelled him to a top-three finish in the Goal 50 because he carried an unbalanced squad and a crisis-hit club to the quarter-finals of the Champions League.

It is not as if he has not been pulling his weight, though. 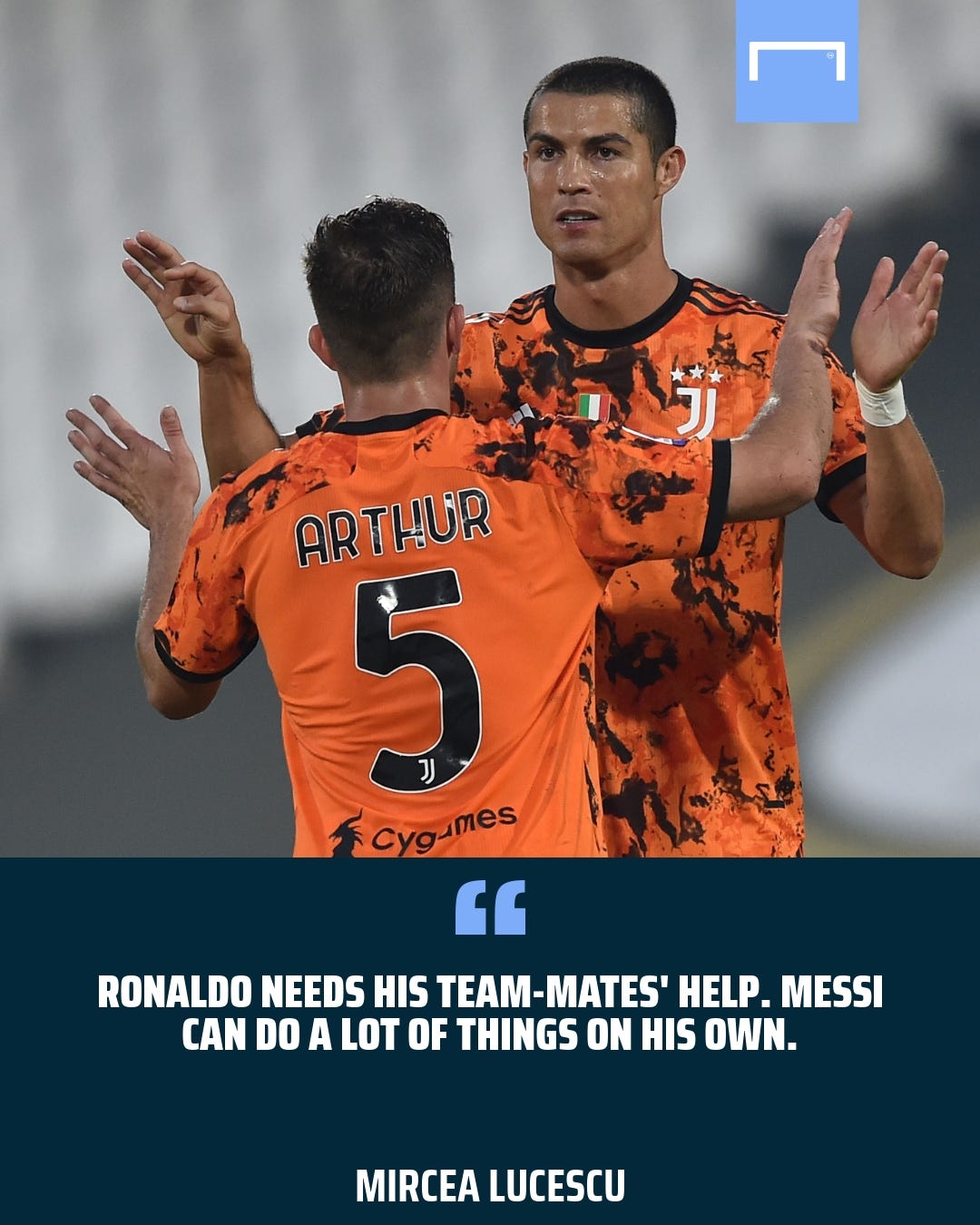 Getty/Goal
The Portuguese undoubtedly struggled in the group stages of last season's Champions League, but he could hardly be blamed for Juve failing to make it past the last 16 for the past two seasons.

Indeed, it is worth remembering that Ronaldo has accounted for all of the Bianconeri's goals in the knockout stage since he arrived in Turin in 2018.

The hope was that a summer of radical change in Turin would lessen the load on Ronaldo this season and put Juve in a position to win a first European Cup since 1996, with club legend Andrea Pirlo brought in to replace the unpopular Maurizio Sarri as coach. The early signs are not encouraging, though.

Juve are fifth in Serie A – and fortunate to be in such a lofty position, given their best win of the season so far, a 3-0 win over Napoli, was a walkover.

Granted, they have been unlucky with injuries and Covid-19 infections. Ronaldo, Giorgio Chiellini, Alex Sandro and Matthijs de Ligt were all absent for what was a chastening Champions League loss to an average Barcelona side a fortnight ago.

But it was difficult not to be critical of the way in which Pirlo set his side up in Turin. The new boss is preaching a fluid approach to the game but, at the minute, his players look a little confused when faced with anything resembling quality opposition.

The returning Alvaro Morata is happy, and thus scoring goals again, but it is not yet clear what exactly Pirlo plans to do with Dybala, let alone exciting new arrivals such as Dejan Kulusevski and Federico Chiesa, while the midfield remains just as big an issue as it was under Sarri. 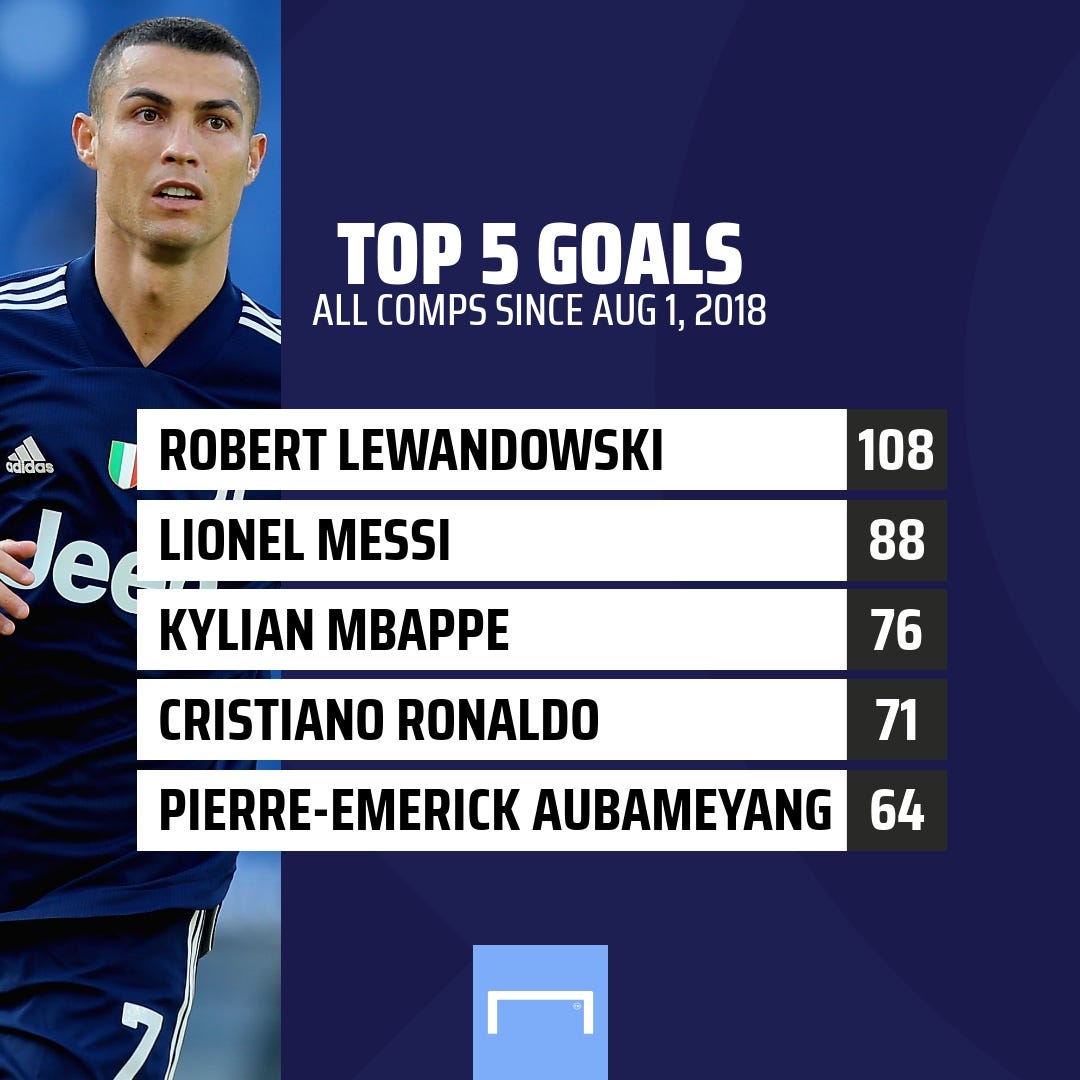 There are grounds for optimism but there are still so many unanswered questions.

In many ways, Ronaldo now finds himself in a similar situation to his great rival Messi at Barcelona: showing slight signs of slowing down and at the heart of a team in transition within a brand-new project.

Pirlo, just like Ronald Koeman at Camp Nou, was always going to require time and patience. Ronaldo arguably has little of either, though.

He is in his third season at Juve and there is no guarantee that he will see out his five-year contract, given his annual salary of €31m (£27.5m/$36.5m) is proving a tremendous strain on Juve's coronavirus-affected resources, and talk has already begun of a move to Paris Saint-Germain.

So, it was perhaps unsurprising that he was so desperate to return to action after his coronavirus-enforced quarantine that he lashed out at the PCR coronavirus test, knowing quite rightly that Juve and Pirlo have little chance of winning Serie A – let alone the Champions League – without him.

He has wasted little time in making his presence felt either. In his first game after self-isolation, against Spezia last Saturday week, he scored twice after coming on as a substitute to lead the Bianconeri to a morale-boosting win.

"Ronaldo is back," the No.7 humbly declared afterwards, "and that's the most important thing." And for Juve, it really is. As the front page of Monday's Corriere dello Sport argued after Ronaldo had netted again in a 1-1 draw with a coronavirus-hit Lazio, the Bianconeri are "Ronaldo, and that's it".

In such a worrying period of uncertainty for the club, Ronaldo still guarantees goals – six in just five appearances so far this season – but the question now is whether he can once again maintain such a ridiculous strike rate over the course of an entire season.

That is what will be needed for Juve to have a chance of winning the Champions League. And for Ronaldo to reclaim his Goal 50 crown.