The Catalans will face Chelsea in the Women's Champions League final on Sunday but, 11 years ago, nobody seemed to care about the women's sector

Eleven years ago, the idea of a UEFA Women’s Champions League final was science fiction to Barcelona.

Jordi Mestre, the former vice-president of the club, laughs when asked about the attitude towards the women's team back in 2010, when he began his four-year stint in charge of the female sector and the B team.

“The first thing I did was go to pre-season camp and I went to visit the coach and his second coach. When they saw me, they were looking at me with a strange face. ‘What is he doing here? A member of the board, here, in the middle of nothing?’” he reveals to Goal.

Fast forward to this weekend, Barcelona will compete in their second UWCL final in three seasons. After losing the first of those, there is genuine belief that on Sunday, against Chelsea, they will go one better.

The rise of this iconic club in the women’s game can be traced back many years, with their first Primera Division title, back in 2012, a huge moment.

“Nobody knew and nobody spoke – no members, no board, no media – about the ladies’ team,” Mestre recalls.

Within three years, as the titles continued to pour in, Mestre proposed the idea of turning the women’s team professional – and the club president, Josep Maria Bartomeu, backed it.

“Barca has always been ahead of times and has always been thinking about how to impact society in the proper way,” Maria Teixidor, who joined the club in 2015 to take over the women’s team, tells Goal. “It made total sense to build this.” 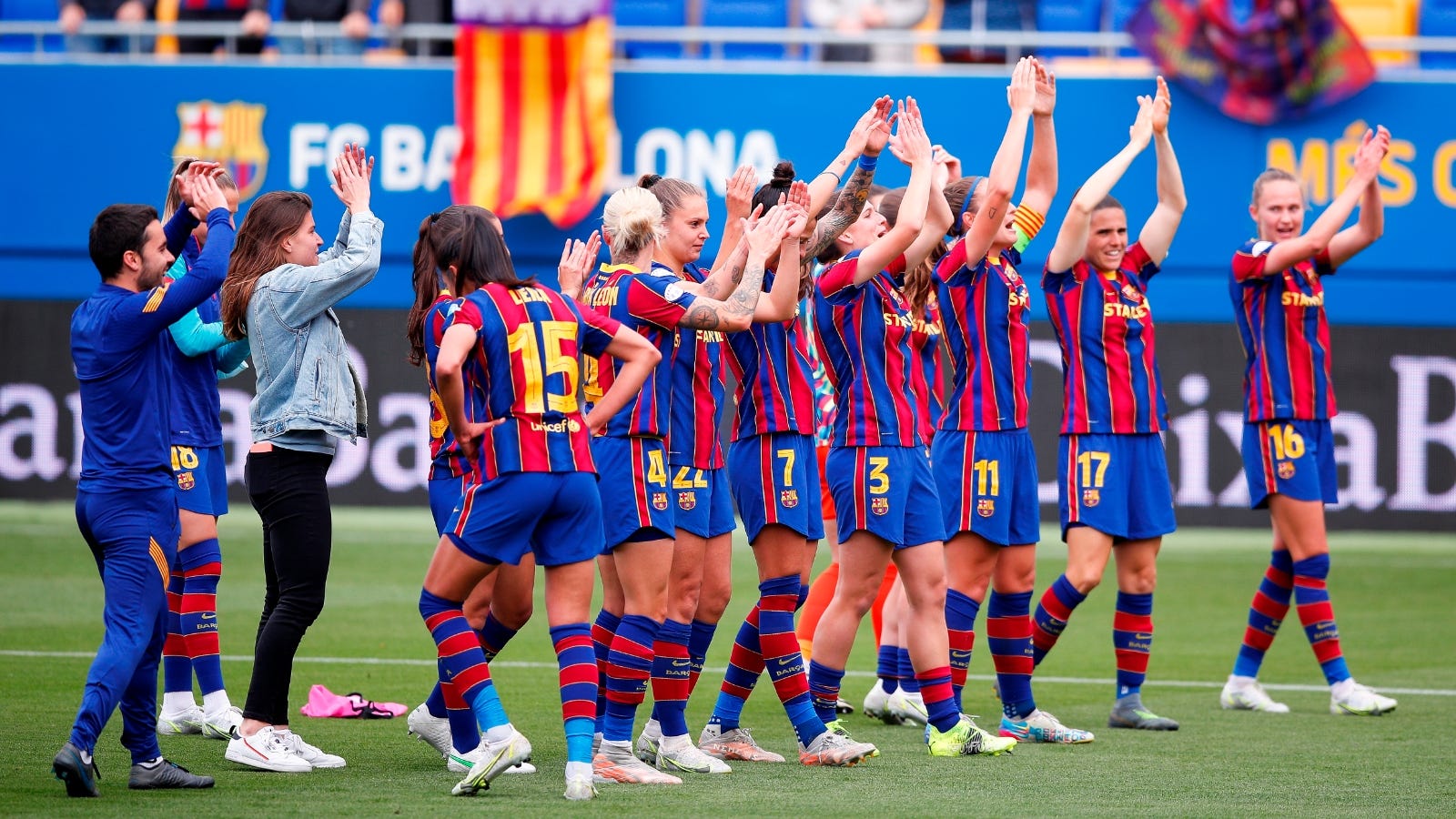 What followed seemed to only strengthen the team’s position. The women’s team would join the men’s on a summer tour of the United States and a deal was announced with Stanley, which the club described as the biggest shirt sponsorship deal to date for a women’s team.

But, strangely, in the four seasons that followed the professionalism, after being crowned champions for four years in a row, there were no league titles.

Mestre describes it as "a period of transition" in which patience was important, but that wasn’t the only thing that shaped the success seen today.

The recruitment during those four years was exceptional. Sixteen of the players in Barcelona’s squad today were signed between 2015 and 2019.

“We wanted to look like Barca, always, so we weren’t thinking about just hiring very good players from all over the world – which we could have done,” Teixidor says.

“We wanted to have this rooted team of players that had lived the transition from amateurism to professionalism, who knew how hard this had been and who really felt the colours within and this passion about the club.

“We needed this mix. We needed to look at what we had already and add those players that could make a difference. All this design is [the sporting director] Markel Zubizarreta's job. I have to say he's an amazing guy.”

“When we sign a player, male or female, we look at the player and how he or she can fit in our system,” Mestre adds. “There are a lot of players, male and female, that are very good, but sometimes, the scouting team says she or he is not for our system.”

What was created was a perfectly balanced and well-blended squad. 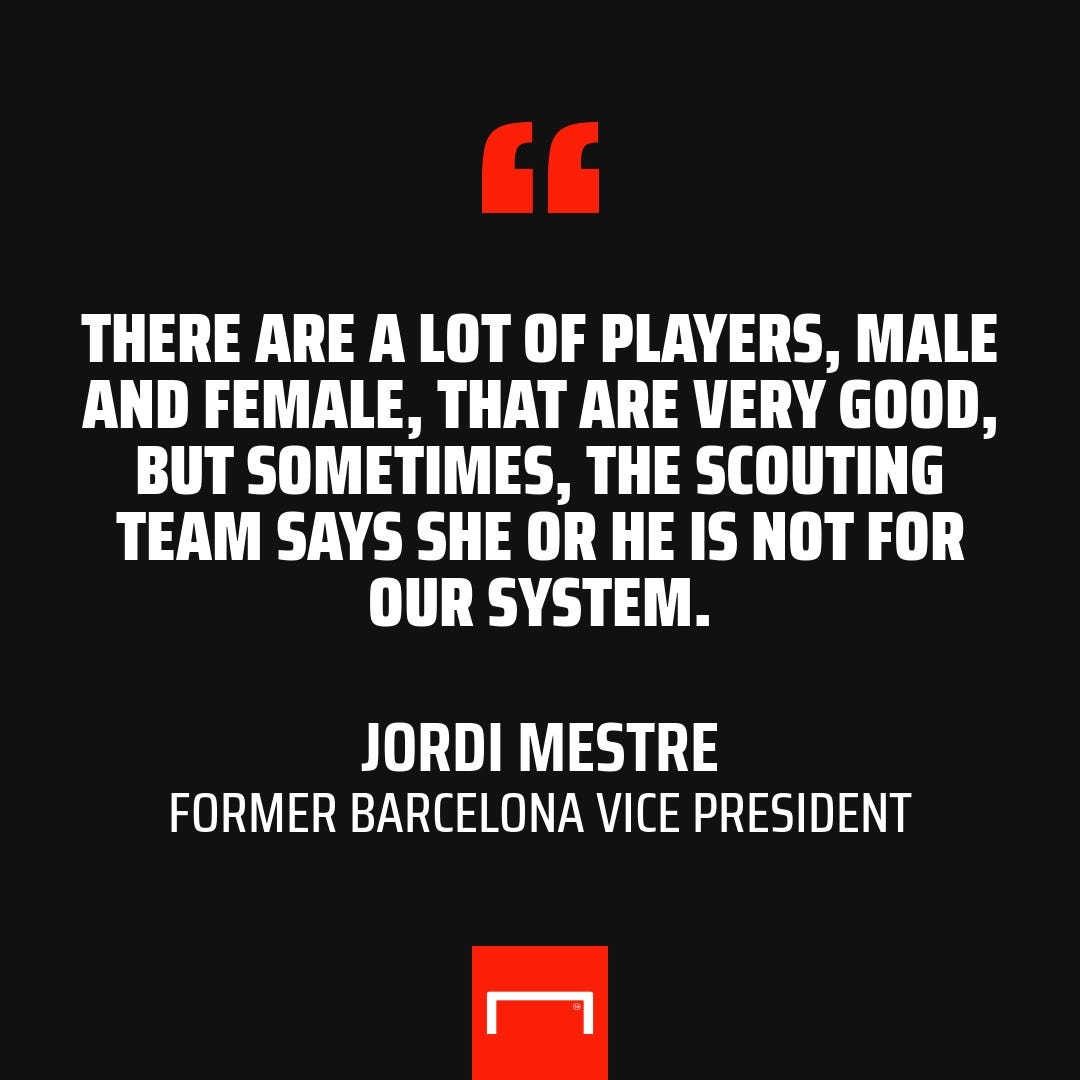 There are those who have come through the set-up and embody Barcelona, such as Melanie Serrano, Spanish players identified from a young age as good fits for the style, such as Patri Guijarro, and stars from abroad, like Caroline Graham Hansen.

All this is complemented by an exciting group of youngsters coming through the academy.

“They really have become like a family,” Teixidor says. “That is the best part, when you see a team that works together and you know that, because of the good relationships they've built, they can reach whatever they want.”

All that was missing now was the perfect coach.

In January 2019, Fran Sanchez was dismissed, something that had rarely happened in Spain before and caused huge waves in the press, and in came Lluis Cortes.

“Lluis brought back something that is not tangible, but which is this glue that sticks everything together and really makes things work,” Teixidor explains.

Under Cortes, Barcelona did something sudden and unexpected. Within four months of his appointment, they were in the Champions League final.

Sanchez had left them in the quarter-finals, thanks to an 8-0 win over Glasgow City, and wins over Norway’s Lillestrom and Bayern Munich saw them continue the remarkable journey.

“I hadn't cried for years and I remember, me and Jordi Mestre, both of us crying,” Teixidor recalls of the semi-final victory. “You had this feeling that things were on the good track. That was one of the best moments I've lived in football.”

To lift the trophy was a step too far; after all, they were facing a Lyon side in their pomp. The French giants lifted their fourth successive European title, going 3-0 up inside 20 minutes.

But, as Teixidor notes, to reach that stage showed that Barcelona were doing the right things.

🙊 Ups! WE DID IT AGAIN #UWCL pic.twitter.com/8Lsm9NjAm5

For the Catalans to be back in the showpiece event this weekend is a testament to the work they have continued since.

They have won back-to-back league titles – this season’s without a single point dropped – to end a five-year barren run, and have continued to strengthen the squad without disrupting the core group.

“If you watch our team now, the same team played in the final in 2019,” striker Asisat Oshoala said this week. “Nothing's changed. Maybe one or two players, of course, but it's not like we're learning new things.

"We're not trying to adapt to ourselves for the past few years. We already adapted to ourselves. We just keep getting better.”

What has changed, though, is the expectation. After being huge underdogs two years ago, the feeling in Barcelona is much different this weekend.

“The other day, Lluis Cortes said something that is true: at that moment, it was an award to be in the final.