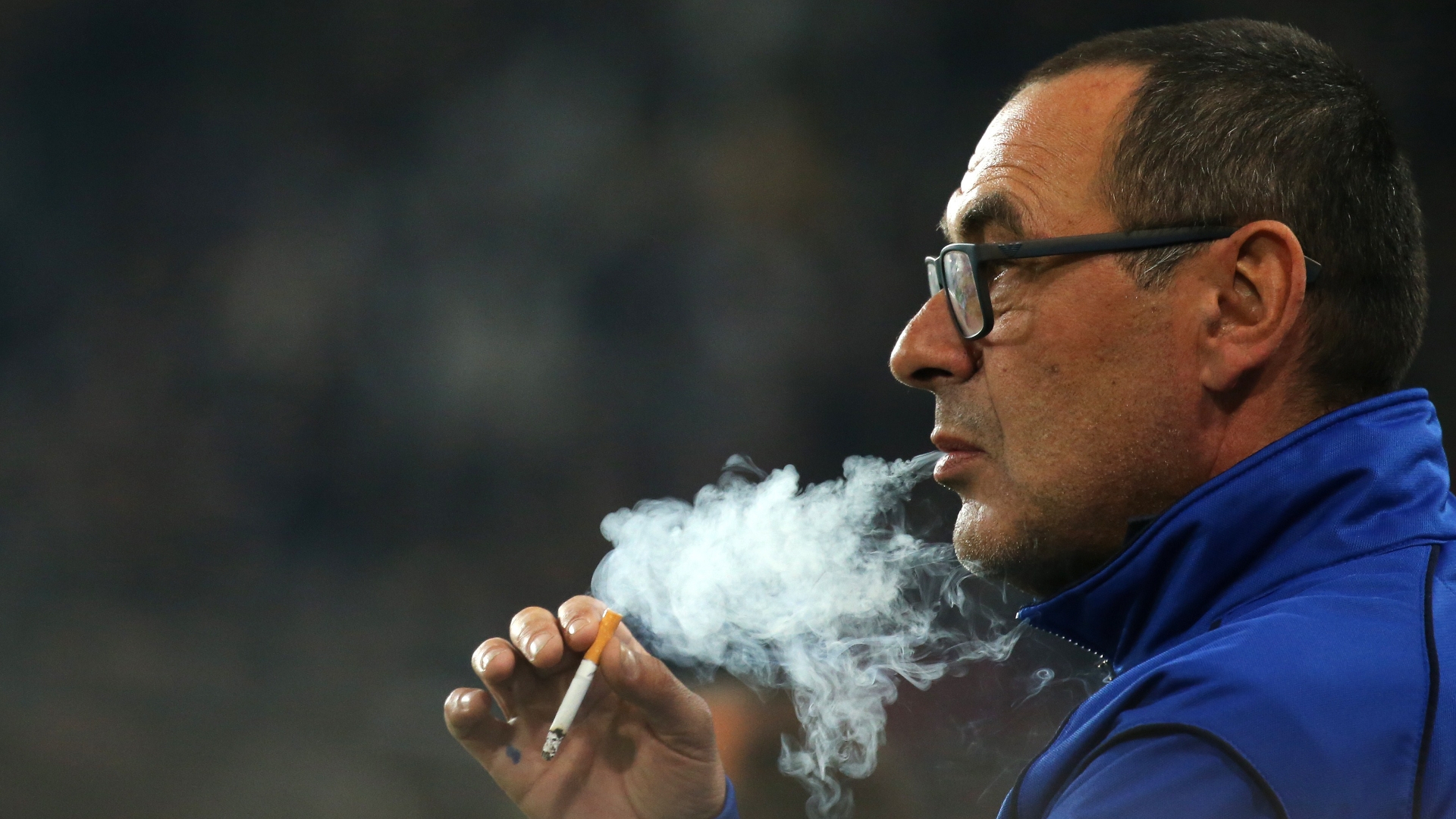 It was the worst kept secret in football. Just a day after it was announced Antonio Conte was, finally, leaving Chelsea, Maurizio Sarri was brought in as his replacement.

And Sarri's appointment is an intriguing one to say the least.

Given how Conte's previous criticism of the club's transfer policy angered the Blues board, one would have assumed Roman Abramovich would have steered well clear of hiring another Italian renowned for his intensity and speaking his mind.

Sarri, after all, is the no-frills Neapolitan who allegedly called Roberto Mancini a "f****t", admitted that he would have told one journalist to "f*** off" had she not been a woman, warned Gonzalo Higuain he'd be a "right d***head" if he doesn't win the Ballon d'Or and, most recently,  stuck his finger up at Juventus fans before a crucial Serie A showdown in Turin .

However, while Sarri's outbursts are sometimes ugly, his style of football is truly beautiful – which is precisely why he became arguably the most in-demand tactician in European football.

That represents a remarkable rise to prominence for a coach who never played the game professionally and cut his teeth managing amateur teams in Tuscany – where his parents hail from – while working in international banking.

Indeed, he only began to focus full-time on football in 1999 and enjoyed a peripatetic, turbulent career – he quit Avellino after falling out with the board – before leading Empoli into Serie A in 2014.

Sarri earned widespread praise for keeping the Tuscans in the top flight but he was still regarded as a major risk when Napoli president Aurelio De Laurentiis hired him to replace the Real Madrid-bound Rafael Benitez in the summer of 2015.

After the Partenopei failed to win any of their opening three Serie A games, many rushed to write him off, including club icon Diego Maradona. “Sarri is a good person, but he’s not worthy of Napoli," the Argentine argued.

Maradona could not have been more wrong. Those that had been watching Empoli closely knew that Sarri had been key to their success. Indeed, Ciro Immobile admitted that he was open to the idea of joining Napoli solely because they had signed Sarri.

"Apart from Juventus, the team that played the best in Serie A last season [2013-14] were Empoli," the striker enthused at the time.

"He had them playing the beautiful game, a team moving even when stationary at set-pieces! He's a well-prepared coach and Napoli have made the right choice taking him."

In his role as technical director of Italy's youth teams, the former AC Milan boss had spent plenty of time scouting players in Serie B. It was there that he first came across Sarri's Empoli and he was so impressed by what he saw that he advised former Milan president Silvio Berlusconi to snap him up in 2015.

"I said to him: 'Silvio, if you want repeat with Milan what happened with me 25 years ago I will give you a name. It won't cost you money, but he is the coach you need, he looks after the players, they understand him,'" Sacchi told Marca.

"I know they were talking, then [former Milan CEO Adriano] Galliani stopped it and I don't know why they didn't like him. Last year Silvio told me, 'Arrigo, I was wrong.'"

Certainly, Milan's loss was Napoli's gain. Under Sarri, the Partenopei were transformed, improving almost every single player at the San Paolo.

He inspired Gonzalo Higuain to have the season of his life by telling the infamously fragile forward on the first day of pre-season: "You're too lazy. If you don't change your attitude, you won't become the best centre forward in the world."

Higuain responded by dedicating himself to a new fitness programme, losing four kilograms, and going on to score a Serie A record 36 goals in a single season.

When Higuain defected to Juventus, Napoli were expected to fall apart. The loss of their star striker made Napoli weaker on paper, but Sarri made them stronger on the pitch.

He successfully converted Dries Mertens from a winger into a centre-forward and brought the very best out of the likes of Lorenzo Insigne, Jorginho, who could now be following Sarri to Chelsea, Faouzi Ghoulam and Kalidou Koulibaly.

"He really is a genius," Koulibaly told Il Messaggero. "He sees things others don't see. He makes you understand how football is and isn't unpredictable. He's a scholar."

Indeed, Sarri has become the thinking man's coach, adored even by the game's great philosopher, Pep Guardiola. Sacchi even sees the pair as "two sons of the same idea", namely that football is "a form of art".

Certainly, there are parallels between the two. Both coaches preach the importance of possession and constant movement, while Sarri is just as meticulous as Guardiola in his approach to the game.

Every fact of the game is worked on in training, from the kick-off to throw-ins. There were even claims that he had 33 different set-piece plays at Empoli.

His sessions, meanwhile, are short (70-75 minutes) but incredibly intense, with the focus being almost solely on working with the ball, and everything is recorded by an overhead drone for further analysis.

Of course, meeting the demands of a perfectionist can be gruelling but the Napoli squad respected his direct yet sincere disposition.

Thus, on a miniscule budget compared to that of Juventus, he created a beautiful, Scudetto-challenging team that is far greater than the sum of its parts.

As Sacchi said of Napoli: "They do not have top players but they are very well organised. They have pace, skill and they move together."

It is, therefore, fascinating to see what he will do at Chelsea, with serious financial backing, working with the likes of Eden Hazard - should they keep him from Real Madrid's clutches - and Willian.

Beyond that, though, it will be thrilling to see him test his talent and temperament in England against Guardiola, Jurgen Klopp and Jose Mourinho.

Sarri can be confrontational, surly and offensive but also humble, charming and witty. He is a wonderfully charismatic and often contradictory character.

Indeed, while his methods are modern, his style is old-school. He is a chain-smoking Charles Bukowski fan who never wears anything but a tracksuit in the dugout and, as far as his players are concerned, he can do no wrong.

"Any question you ask him, he always has an answer," Koulibaly says, "and it's always right!"

Whether he is the right kind of character for Chelsea after Conte is open to debate but a Sarri stint at Stamford Bridge will undoubtedly be as colourful as his language.