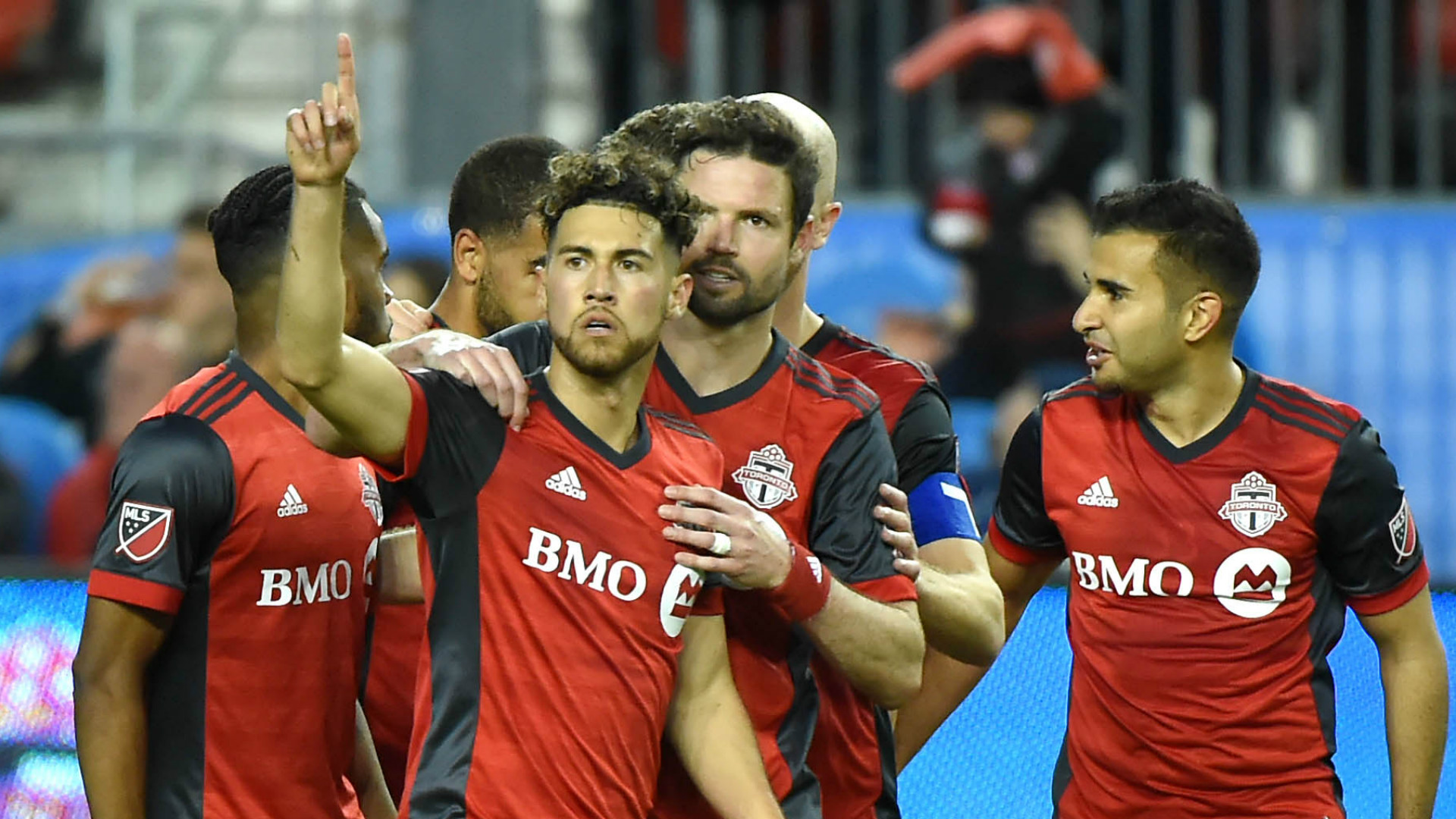 International call-ups have several MLS teams turning to their benches to pick up the slack, and while some are equipped, not all teams can handle it

The absence of stars like Clint Dempsey, Michael Bradley Jozy Altidore and Tim Howard might have been enough to grind MLS to a halt during an international break in year's past, but the league's wealth of talent, and the improved depth of many teams makes coping with international call-ups a more manageable proposition.

All 22 teams are in action this weekend, and while teams like Toronto FC, Houston and Sporting Kansas City cope with multiple international call-ups, other teams are hoping to take advantage of the aforementioned absences.

Arena: 'U.S. saving no one for Mexico'

Two teams that were considered the best in MLS at one point earlier in the season head into the break eager to halt lengthy winless slides. The Portland Timbers went from looking unstoppable in March to registering a single point in May, while FC Dallas went from being the league's lone unbeaten to riding a four-match winless slide while also having to cope without both starting center backs.

Toronto FC is riding the mother of all hot streaks, with a 7-0-1 run having Greg Vanney's men running away with the Supporters' Shield. Keeping that unbeaten streak will be a challenge this weekend, on the road and without U.S. stars Bradley and Altidore. The Chicago Fire's own hot streak — a four-match winning run — will be on the line when they visit Orlando City on Sunday.

Here is a closer look at the key things to watch in MLS Week 14:

IT'S A BIG WEEKEND FOR ... BENCH OPTIONS

Toronto is running away with the MLS Supporters Shield race, and while we will have to wait a while before we know if TFC has the goods to win an MLS Cup, you could definitely argue that the Canadian club is already the deepest team in the league, if not MLS history.

Greg Vanney's side has ovecome fixture congestion, injuries, suspensions and call-ups to fashion its current league-best record, and TFC has done so thanks to the excellent work of Vanney and general manager Tim Bezbatchenko. They have maximized all the avenues by which you can strengthen a team in MLS. Designated players, free agency, the draft, homegrown players, trades and targeted allocation money signings have all contributed to building TFC's roster, at a time when teams have more mechanisms to strengthen their squads than ever before.

TFC showed just how strong its bench is last week with a 5-0 thrashing of Columbus. Despite missing Sebastian Giovinco and Jozy Altidore, the club was still able to destroy a good Crew side. This weekend offers another challenge for that deep TFC bench, as Michael Bradley and Jozy Altidore miss out while with the U.S. national team. Even if New England succeeds in stopping TFC, that won't take away from what Vanney and Bezbatchenko have built, a roster that is the envy of the league.

Several teams will have their depth tested this weekend, including the following, which all happen to be among the deepest teams in MLS:

FC DALLAS. No Walker Zimmerman (injured), Matt Hedges or Kellyn Acosta (U.S. national team)? No problem. or at least Oscar Pareja will be hoping so. Maynor Figueroa and rookie Walker Hume will likely have to anchor the central defense.

SPORTING KANSAS CITY. Graham Zusi and Matt Besler are with the U.S. while Erik Palmer-Brown is at the Under-20 World Cup and Kevin Ellis is injured. Roger Espinoza is suspended (and joining the Honduran national team anyway). What will Peter Vermes do? Plug in newly-signed defender Amer Didic into central defense and Soni Mustivar into midfield, while Saad Abdul-Salaam (or rookie Colton Storm) deploys at right back. And if Dom Dwyer can't go? Speedy Latif Blessing has already shown he can be a factor when called upon.

HOUSTON DYNAMO. The speedy Catracho tandem of Romell Quioto and Alberth Elis will be sorely missed, but Wilmer Cabrera knows he has Mauro Manotas and veteran Vincente Sanchez, as well as the versatile Andrew Wenger. Dylan Remick steps in for U.S. national team legend DaMarcus Beasley, while Jalil Anibaba can step in for Adolfo Machado, who is with the Panamanian national team.

Fortunes change quickly in MLS. It wasn't too long ago when the Fire were still trying to figure things out and adapt to new arrival Bastian Schweinsteiger. At the same time, Orlando City was rolling, sitting in first place in the East, something few would have projected before the season began.

One month later, things have changed a bit. The Fire have rattled off four wins in a row to move into second place in the East, riding the goal-scoring of Nemanja Nikolic to a steady run of form. Meanwhile, the Lions hit a cold patch, going six matches without a victory and going from untouchable to vulnerable at Orlando City stadium. Jason Kreis' team stopped the bleeding with a mid-week win against D.C. United, but questions remain about just which version of Orlando City is the real one.

The Fire-Orlando City clash is one to watch, and not just because of Nikolic and Cyle Larin, two of the league's top strikers. They are currently separated by one point in the Eastern Conference standings, and both are determined to establish themselves as not only playoff teams for the first time in years (or in Orlando City's case, ever), but as the team best-equipped to try and catch East-leading Toronto FC.

The Fire will be without Dax McCarty, who has been playing at an MLS Best XI level since arriving from the New York Red Bulls. The Fire still have Schweinsteiger and Juninho in midfield, and Michael de Leeuew to slide into a playmaking role. That said, the Fire will miss McCarty's presence, especially against a tough Orlando City midfield. It remains to be seen what sort of contribution Kaka will be able to make after missing the Lions' midweek match win with an injury.

Larin will be key to the Lions attack, as usual, but Giles Barnes will look to build on his impressive showing off the bench on Wednesday. He could be the difference maker for Orlando City against a Fire defense that has been better over the past month than it was earlier in the season.

Christian Ramirez vs. Ike Opara. Sporting KC's defense will be without Matt Besler and Graham Zusi, but Opara still commands the middle and will make life difficult for Ramirez.

Nemanja Nikolic vs. Jonathan Spector. There isn't a more in-form striker in MLS right now than Nikolic, but Spector is a season veteran capable of keeping him contained.

Maxi Moralez vs. Haris Medunjanin. The battle in central midfield will be key in the NYCFC-Union clash and Medunjanin will need to keep Moralez from running wild, while also creating himself.

Chris Wondolowski vs. Liam Ridgewell. If the Timbers are going to halt their slide then Ridgewell must contain the elusive and clinical Wondolowski.

Miguel Almiron vs. Matias Laba. After two straight multi-goal performances, Almiron should face stiffer opposition from Laba, who has the engine to keep up with the dynamic Atlanta playmaker.

Cubo Torres vs. Chad Marshall. Torres has enjoyed a great season, but he won't have Honduran speedsters Alberth Elis and Romell Quioto to help him, which works in Marshall's favor.

Bastian Schweinsteiger vs. Will Johnson. The absence of Dax McCarty will put more midfield responsibility on Schweinsteiger, and Johnson will do his part to make sure the German doesn't find a comfort zone.

Kei Kamara vs. Drew Moor. Kamara is coming off a good match, and has the strength to overpower Moor, but Moor is a wily veteran who keeps himself in good position.

Hector Villalba vs. Kendall Waston. With Kenwyne Jones on international duty, Villalba should be Atlanta's lead forward, where his quickness could cause problems for Waston.

Fredy Montero vs. Leandro Gonzalez Pirez. Montero is in a bit of a funk, but with Gonzalez Pirez being susceptible to defensive lapses, the Whitecaps forward could find some success.

TIMBERS 3, Earthquakes 1. Can a return home help end the Timbers' five-match winless slide? This is the match Diego Valeri and Fanendo Adi recapture their early-season mojo.

NEW YORK CITY FC 2, Union 1. Patrick Vieira's men are tough on their small Yankee Stadium field, and as much as the Union have played better lately — last week notwithstanding — a road win here is a bridge too far. David Villa has a field day.

SPORTING KC 3, Minnesota United 0. The Loons got the better of Sporting KC last month, and Peter Vermes' side will be looking for revenge.

Whitecaps 1, ATLANTA UNITED 3. Vancouver deserved better than a loss last week to D.C. United, but a rebound against an in-form Atlanta United team would be easy. Especially with Miguel Almiron in top form.

IMPACT 2, Red Bulls 1. Though Jesse Marsch's team has shown improvement in recent weeks, a rested Montreal side that has been better of late comes out ahead.

REVOLUTION 2, Toronto FC 1. As deep as TFC is, playing without Michael Bradley and Jozy Altidore won't be easy. Having Sebastian Giovinco in the lineup provides a boost, but the Revs are tough at home and Diego Fagundez's recent good form should continue.

FC DALLAS 3, Real Salt Lake 1. Walker Zimmerman's injury comes at an awful time, with Matt Hedges on international duty. Oscar Pareja will need to field a patchwork defense, but FC Dallas will still be favored against an RSL defense in shambles.

Rapids 1, CREW 2. Last week's surprising 1-0 win against Sporting KC might offer the Rapids a much-needed confidence boost, but they are still struggling to create chances, and their defense will have a stiff challenge halting the Crew's attack.

ORLANDO CITY 2, Fire 0. The Lions halted a six match winless slide last week, and while the Fire are on a roll with four straight wins, they'll miss Dax McCarty in Orlando.

SOUNDERS 2. Dynamo 0. Though Clint Dempsey and Jordan Morris are on international duty, the Sounders still boast the midfield trio of Nicolas Lodeiro, Osvaldo Alonso and Cristian Roldan, which will keep the short-handed Dynamo from recording their first road points of the season.