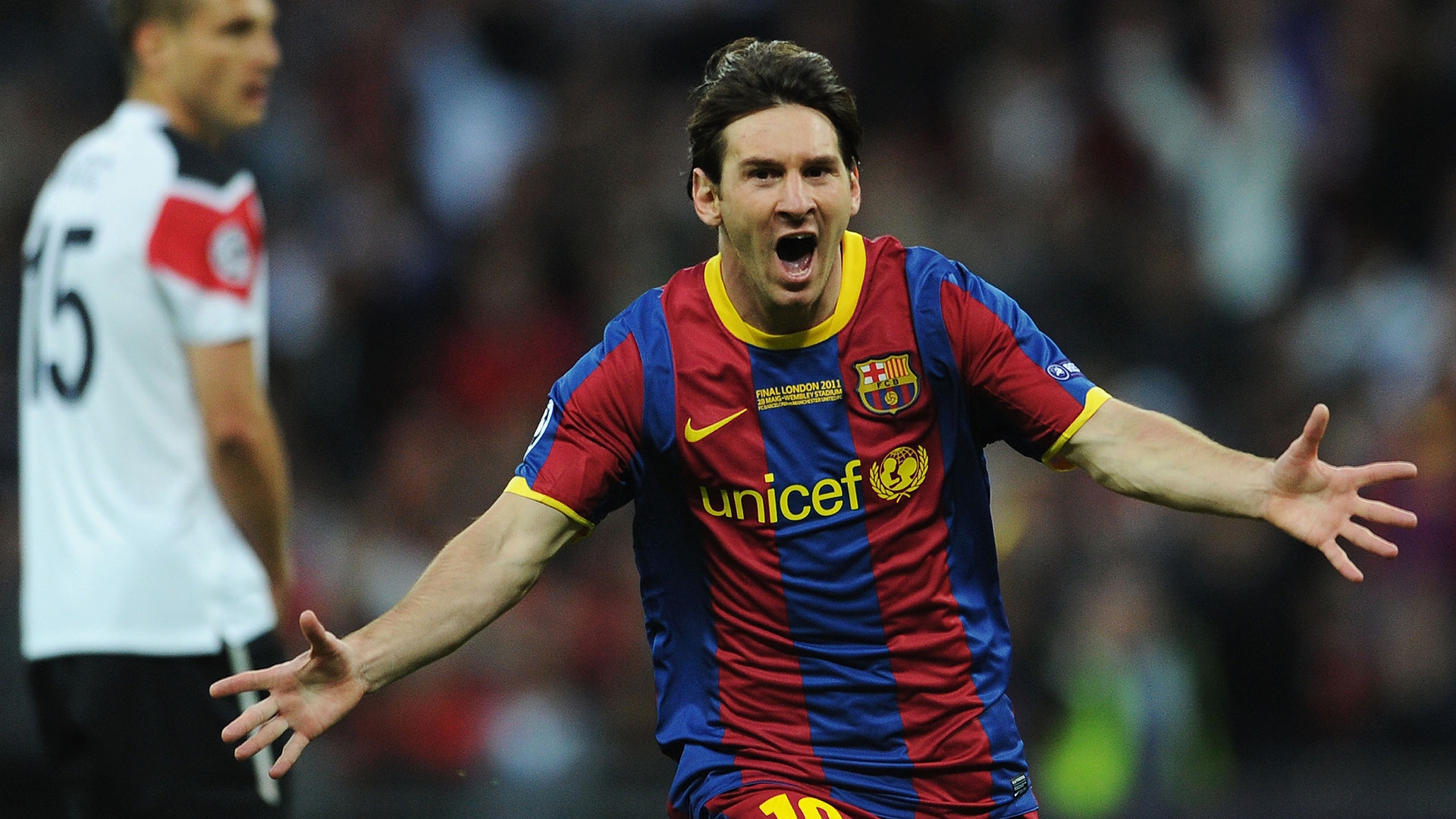 Nine years ago today, "the stars aligned", to borrow Pep's own words, and Barca treated observers to one of the best team displays in football history

“I was standing there watching them lift the trophy. Me, Giggsy and Scholesy were standing together with our hands over our mouths and I said: 'I feel embarrassed lads'.

Nine years on from Barcelona's breath-taking Champions League final victory over Manchester United, the memory still rankles with Rio Ferdinand. Wembley bore witness to one of the most scintillating team performances in the competition's long, distinguished history – capped by the individual heroics from Messi, who confirmed his status as the world's finest player on that May evening in London.

“Messi was a killer,” the ex-England defender, no mean player in his own right, recalled to Copa 90. “Ronaldinho was unreal, the free-flowing magician. But with Messi, he’d do all of that but there was always a goal or an assist at the end of it.”

Nobody could claim that United did not have fair warning going into the decider. Just two years previously Barcelona, stewarded by Pep Guardiola and featuring the double threat of Xavi and Andres Iniesta at their very best, had dispatched the Red Devils 2-0 at the Stadio Olimpico to win their third Champions League title; a game that featured that rarest of beasts, a header from Messi.

Under Guardiola the Catalans had honed the concept of possession football into a near-artform, with Xavi and Iniesta's intricate passing supported by Messi's wizardry and the punching bursts of Dani Alves from the right. That potent mix had seen Barca crowned Spanish champions by four points over Jose Mourinho's Real Madrid, suffering defeat on just two occasions and inflicting a famous 5-0 thrashing on their arch-rivals.

It was not infallible, however. The previous season Mourinho had shown how to blunt Barca's attacking force with a tour de force of defensive football over two legs as Inter prevailed in the Champions League semi-finals. The abrasive Portuguese coach also got the better of Guardiola in the Copa del Rey, taking the trophy in extra-time thanks to Cristiano Ronaldo's extra-time winner.

Sir Alex Ferguson, of course, was cut from a different footballing cloth than the man many claim he desired as his successor at Old Trafford. United, therefore, went out at Wembley to beat the Blaugrana at their own game, pressing high and crowding out any attempts to get those dizzying passing triangles up and running.

For the first 10 minutes at least they were successful, with Park Ji-sung giving Messi and Alves more than food for thought as he harried and harassed. Guardiola appeared more than a little concerned on the bench.

But if United were hoping that early discomfort would set the tone in the final, they were to be sorely disappointed. Once Barca found their rhythm and, most importantly, Xavi, they took a firm hold of the game that they refused to release.

The Spain midfielder was omnipresent in the engine room, popping up every single time Barca needed a passing outlet in a manner that made one wonder if there were not in fact three or four players on the Wembley pitch sporting the number six jersey. Add Iniesta and the superlative Messi into the mix, and the Red Devils' chances of glory slipped away with each clockwork combination the trio made to pull their opponents in every possible direction.

Xavi completed 141 passes that evening, 39 more than the entire starting United midfield combined. Inevitably it was Barca's quarterback - whose lingering reputation as the steadiest of presences with his short distribution glosses over the creativity and sheer range he possessed with the ball at his feet - who created the opener, sliding through for Pedro to finish past Edwin van der Sar.

That first-half goal stung United into action, and they went on to score from their first and only shot on target of the entire match. Wayne Rooney hit back with a goal straight out of Guardiola's playbook, exchanging passes with both Michael Carrick and Ryan Giggs before looping the ball past Victor Valdes to mark an outstanding strike.

Perhaps on any other occasion Rooney's masterpiece would have gone down as one of the game's most memorable goals. The striker's effort, however, proved a mere intermission in the Barca show.

Eight minutes into the second half Messi had his own answer, taking aim on the edge of the box and firing into the bottom corner to leave Van der Sar flailing. “That's my boy”, a jubilant Guardiola appeared to say under his breath amid wild celebrations, while the red and blue half of Wembley exploded in admiration for the little Argentine.

By the 70th minute the final was already over as a contest. After Messi had left Nani and Patrice Evra in the dust with his latest shuffle and burst, the ball filed back to David Villa to notch the third and decisive strike for Barca.

"This Barca is the best team in the world,” Madrid legend Hugo Sanchez told Marca in the edition of the newspaper that came out the morning after victory, and few could argue with the great striker's opinion. At the forefront of the world's plaudits was Messi, starting with his own coach: “He is the best player I have ever seen and ever will see,” Guardiola gushed after the match. “Messi is unique and never to be repeated.”

It is difficult to pinpoint what is most impressive about the club's 2011 win: the one shot on target to which goal-happy United were restricted; Messi, Villa and Pedro all finding the scoresheet to take their combined tally to 98 for the season; perhaps Guardiola, a coaching rookie in every sense at the time of his appointment, celebrating his 10th title in just three years on the bench.

A strong argument, though, can be made for the fact that of Barcelona's starting line-up, no less than seven had been nurtured through the ranks of La Masia, including the entire midfield trio and two-thirds of that potent attack. While ignoring the contributions of big-money signings like Villa and Alves would be lazy revisionism, from Guardiola through to Carles Puyol – who enjoyed a late cameo in his final season at Wembley – to Messi himself, the club boasted a sense of local identity and belonging that is almost alien to the modern game at its top level.

Nine years ago Barca could claim that they were indeed “Mes que un club” and mean it, whereas today it rings hollow. Right down to the decision to allow Eric Abidal to lift the Champions League in the Royal Box following the left-back's harrowing battle with cancer, this felt like a club that at least attempted to do things in the correct fashion.

We now know that Guardiola's glorious side would be on top for just a fleeting moment. The following year Chelsea dumped Barca out of Europe, while back in Spain the Blaugrana relinquished the title to Mourinho, each Clasico becoming an exercise in petty spats and skulduggery which suited the Madrid coach down to the ground.

Guardiola himself was off by the end of the 2011-12 campaign and La Liga gradually transformed into what by the end appeared Messi and Ronaldo's own dispute, the pair taking the art of goalscoring to staggering new heights. The Argentine himself has become the heart of the Barca side, paired with some of the world's finest forwards; but he has never had a partner working from deep to match Xavi and Iniesta at their best.

Equally, even though the Blaugrana have never stopped winning trophies over the last decade, including the 2015 treble, provoking the same awe and admiration as their predecessors is only a distant dream.

Even their coach, despite going on to glittering success at both Bayern Munich and Manchester City, has so far failed to reach the same peaks of performance that were so commonplace at Camp Nou; one of the numerous reasons why a Messi-Pep reunion is such reliable fodder for the sporting press of both England and Spain.

“I remember those four years with a certain nostalgia and great joy,” Guardiola told the 2018 documentary Take The Ball, Pass The Ball, which tells the story of his great Barca side. “In those four years the stars aligned at the perfect time. The fundamental reason for our success was the players' immense talent.

“Us trainers are like caddies in golf, but they are the ones who put the ball in the hole. Every player played his part. Everyone knew Messi was the best and nobody wanted to take his crown.”

The understanding the pair forged at Barcelona, both as relative newcomers to their respective crafts, was at the heart of a process that culminated at Wembley and saw the Catalans labelled as one of the greatest sides in history. “Unique and never to be repeated,” Pep said of his charge that May evening; words that ultimately came to define his Barca team as much as their star player.