The 2019 edition of the trophy was the bitterest and most controversial in recent memory, giving lie to the claim that technology can end disputes

In the world of international football, the third-place play-off for players and spectators alike usually carries the dread and dreariness of a tax audit.

An insipid, anti-climactic appendage sandwiched between the drama of the semi-finals and anticipation of the main event itself, it is a game that tends not to raise many emotions. But thanks to Lionel Messi, Saturday's Copa America clash will live long in the memory.

Messi chose the stage of Sao Paulo's Arena do Corinthians to launch an incredible attack not just on the refereeing at the Copa, but on CONMEBOL as a whole.

"There is no doubt, the whole thing is set up for Brazil," he fired to reporters after boycotting the medal ceremony following Argentina's 2-1 win over Chile, a game which saw both him and Gary Medel sent off for an unedifying but far from violent shoving match in the first half.

"We could have gone further but we weren't allowed into the final. Corruption, referees and all the rest stopped people from enjoying the football.”

The football itself came to an end the following day, with Brazil indeed fulfilling expectations in a 3-1 defeat of Peru in front of President Jair Bolsonaro and the Maracana faithful. It was a champions' performance from Tite's men, who were pushed all the way by a Peru side that showed no fear or compunction in chasing victory from the start.

But while Messi's claims of corruption and a conspiracy to deliver the hosts' first title since 2007 are clearly wide of the mark, there is equally no doubt that in no small part to the standard of officiating and catastrophic use of technology few outside Brazil will look back fondly on the events of the past few weeks. 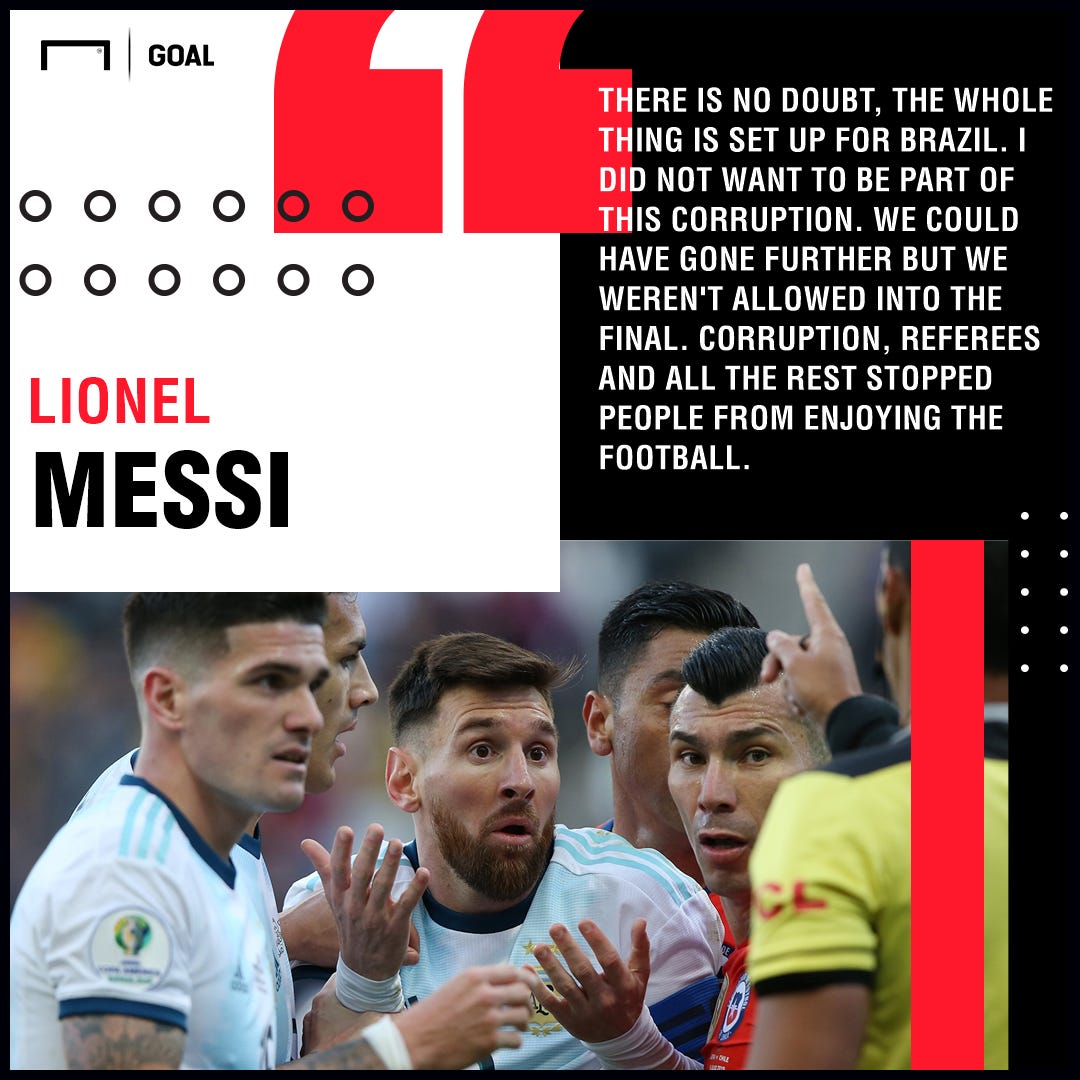 The VAR system in particular has found itself in the firing line this tournament. Used properly, as in the 2018 World Cup and in a host of other major competitions, it helps massively to clarify refereeing decisions, avoid costly errors and give the game unprecedented transparency.

It is no magic bullet, however. In the wrong hands, as we saw in Brazil, it can prove a disastrous diversion. The implementation of VAR across the entirety of the Copa America - from the confusion produced in the very first match when an ill-placed microphone caught Nestor Pitana's conversations with those in the cabin, to the final where Roberto Tobar almost begrudgingly agreed to consult the screen for roughly five seconds before confirming Brazil's late penalty - has been extremely problematic.

The biggest issue by far was the inexplicable decision to keep everyone else in the dark while decisions were made. Replays during VAR consultations received a blanket ban, leaving players, fans, television viewers and journalists oblivious - for up to five minutes at a time - to exactly what was going on.

In comparison with the World Cup and Champions League, as Colombian official Adrian Velez explained to El Colombiano, Copa referees have also been using inferior technology – 24 cameras to 32 in Russia - for which they have received precious little instruction. There were also problems with the signal used to connect referees, most notably in the semi-final when VAR was disrupted by a frequency used by the presidential security team.

But it is the arbitrary, inconsistent use of the technology that has caused the most outrage in Brazil. The vast majority of referrals were for goals that had already been ruled out by the referee or linesman, or else for penalties already given, as happened in the final on two occasions.

The case of Roddy Zambrano summed up the entire argument. The Ecuadorian declined to use VAR on two occasions when Argentina appeared to have a strong claim for a penalty in their semi-final against Brazil, or indeed at any other point in that fractious, high-intensity game. It was those failures, and an objectively sub-standard performance overall - and one repeated in the third-place game and several others in this Copa that unleashed the rage of Messi and the AFA, culminating in Saturday's explosion.

“VAR is like a child,” opined Colombia coach Carlos Queiroz, “when we are children sometimes we fall and we pick ourselves up in order to learn how to walk. We have to support VAR because football's credibility is at stake.” On the evidence of the last few weeks, in South America at least there is a long way to go still before it can stand on its own two feet.

VAR aside, this Copa will leave a lingering bad taste in the mouth. Part of that may be down to a general drop in standard across the tournament from the gripping 2016 edition, with three of the four quarter-finals ending scoreless and only Brazil – it is worth underlining, worthy winners and the strongest team by far, including against Argentina – consistently performing above the mediocre. 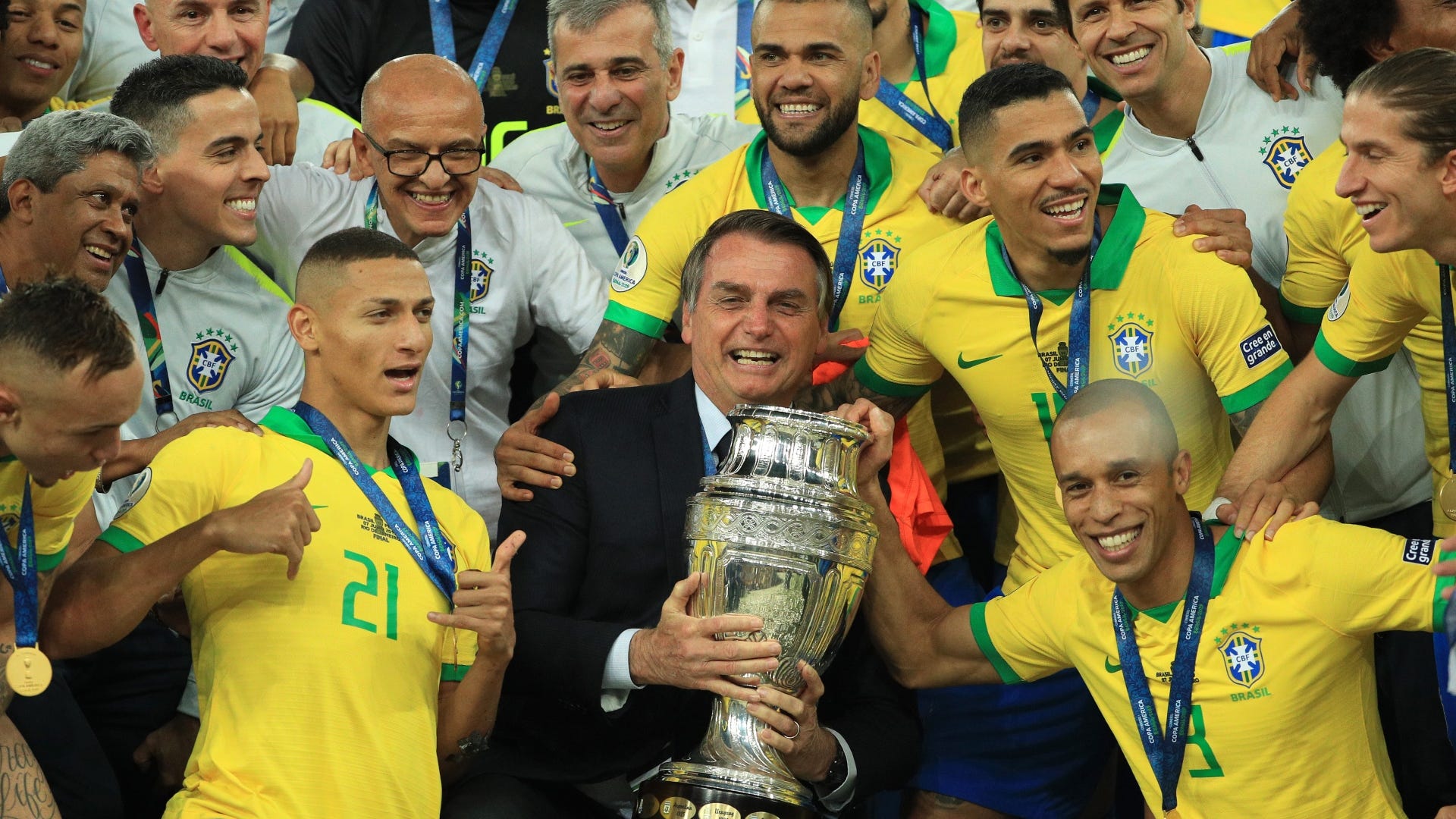 The political aspect of the competition is a further irritant. Bombastic right-wing President of Brazil Jair Bolsonaro – the 'anti-system' politician who spent 20 years in Congress before running on a ticket of fear-mongering and discriminatory remarks – took it upon himself to assume a starring role at the Copa, appearing on the Mineirao pitch during the game against Argentina and posing with the trophy in hand following victory over Peru.

While that divisive figure soaked up undeserved applause, Tite, the real architect of the triumph through years of patient work, was conspicuously absent from the photo. The coach earlier slipped Bolsonaro's efforts to embrace him while receiving his medal, and looked suitably uncomfortable at the incursion of cheap political point-scoring into his team's celebrations.

Thus ended the 2019 Copa America, with Argentina and CONMEBOL on a virtual war-footing following a frenzied exchange of angry official statements and Messi potentially facing suspension for his outbursts against those in charge (the rulebook allows for up to two years for “insulting in any way and through any medium CONMEBOL or its authorities and officials”).

“Those accusations,” the governing body stated, “show disrespect to the competition, all those involved and the hundreds of CONMEBOL professionals, who since 2016 have worked tirelessly to make South American football more transparent, professional and developed.” Quite where the decision to move the Libertadores final out of South America fits in that image is neither here nor there, clearly.

For a continental federation whose express mission as detailed above is to become a modern, transparent body, that Libertadores debacle and the chaos of the Copa America just go to show how far from that ideal CONMEBOL really is. There may be no conspiracy, but on the evidence of June and July there is very little control either, be it of referees or interfering heads of state – and that is a real concern.