The teenager has gone from the Brazilian fourth tier to the Arsenal first team in less than a year - but how does the process of discovering him work?

The world of football transfers can be a murky business.

Nowadays it is often all about agents, some of whom are as famous as the players themselves, with everyone seemingly fighting over a piece of the pie.

But scratch beneath the surface a bit and you find the age-old art of scouting is still going strong. For every deal that is put together by friends doing each other favours in high places, there is another that has been sourced through hours and hours of research and stringent background checking.

Sometimes they do not work out, but when a scouting department does get one right it can still prove to be hugely beneficial for a club.

For an example of that you have to look no further than Gabriel Martinelli, the Brazilian teenager who has been nothing short of a sensation since arriving at Arsenal in the summer as a relative unknown.

Martinelli, who was playing state football with Ituano in the fourth tier of Brazilian football less than a year ago, has scored 10 goals in all competitions so far for the Gunners during his debut season in England. It is the first time a teenager has reached double figures in a single campaign for Arsenal since Nicolas Anelka 20 years ago.

And the impact Martinelli has made in north London is not down to luck. It is down to quality scouting.

Arsenal’s recruitment network spent hundreds of hours watching the teenager, both in the video suite at London Colney and in person, while also exploring what sort of character he was off the pitch before pushing the button on the transfer. 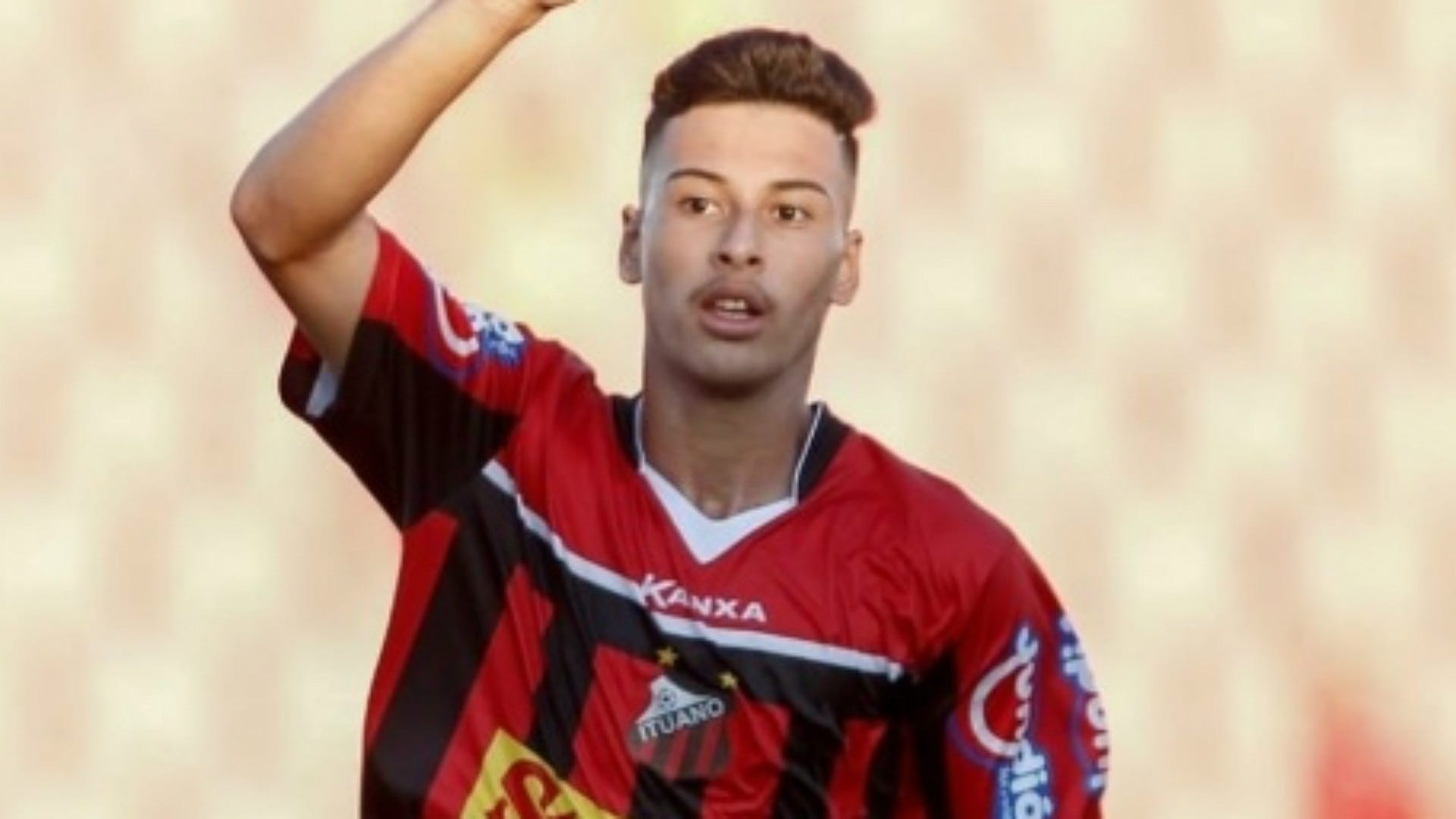 Francis Cagigao, the man who played a key role in bringing Cesc Fabregas to Arsenal more than a decade ago, was the driving force behind the deal which was months in the making.

Cagigao, head of international recruitment at Arsenal, travelled to South America to personally watch the teenager in action for Ituano before the final decision was made, but there were several other scouts within his network who also ran the rule over the young forward before the contract was finally signed.

It was a deal that perfectly showcased the importance of a football club having a quality scouting network which reaches far and wide across the globe.

“Francis Cagigao strikes again, legend!” Fabregas tweeted moments after Martinelli - who placed sixth in Goal's NxGn list of the best teenage footballers on the planet earlier this week - had run 67 yards before scoring a memorable goal against Chelsea in January. It was a rare moment of public recognition for a man whose work often goes under the radar in north London.

Before he made his move to Arsenal, Martinelli was not an unknown player to top European clubs by any means. He had spent time with Manchester United on four separate occasions between 2015 and 2017, even lining up alongside Mason Greenwood in an Under-18s friendly against Lincoln City.

He had also had spells training in Spain within Barcelona’s famous La Masia academy, but neither club decided to pursue a permanent move for the youngster from Guarulhos, the second largest city in the state of Sao Paolo.

Arsenal, however, had no reservations. After months of scouting, Cagigao was convinced the young forward had the quality needed to be a success in England, so the Gunners made their move and the deal was done for just £6 million ($8m) . 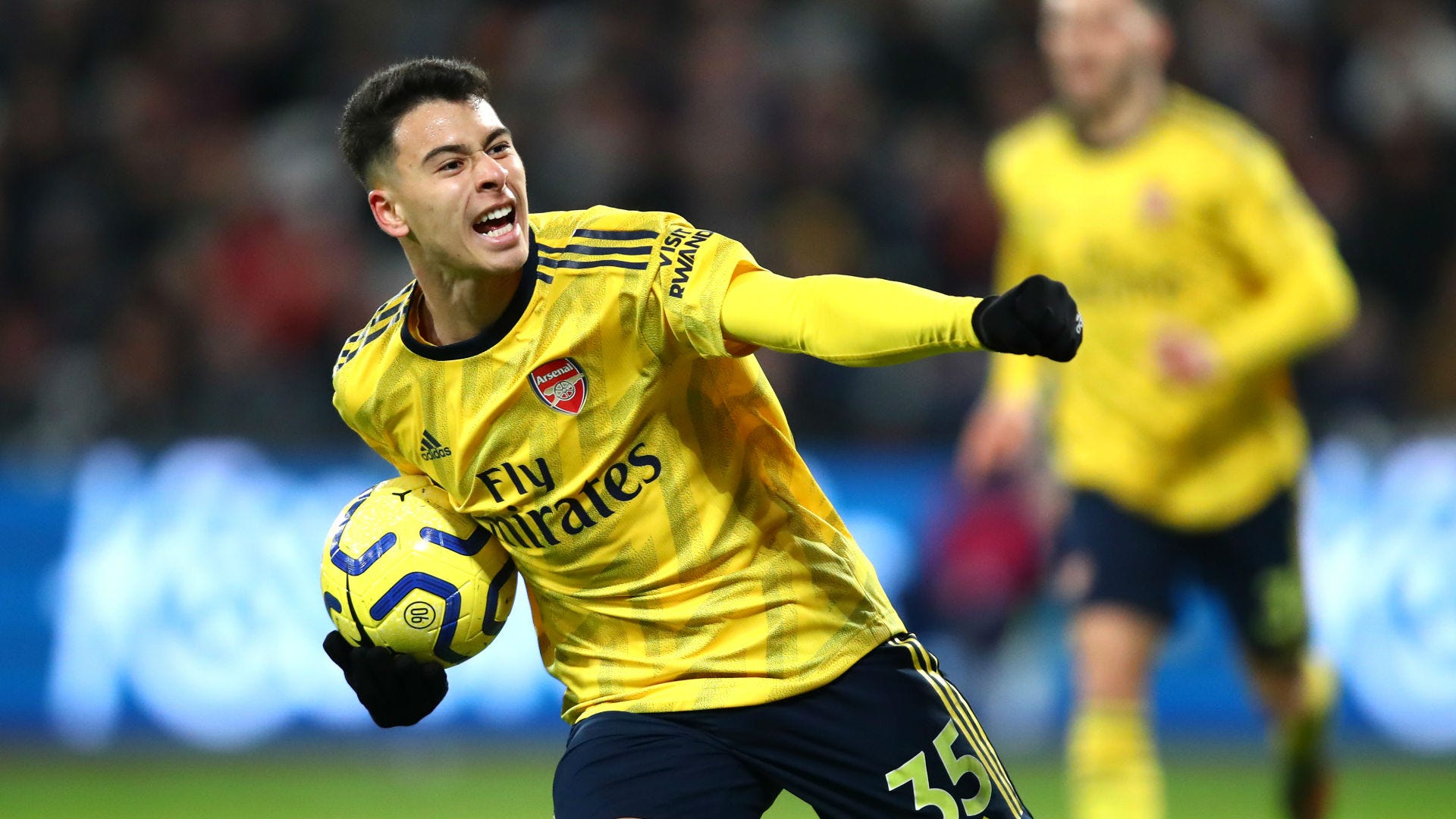 There were some eyebrows raised when the transfer was confirmed, with most presuming that the teenager would initially link up with the youth teams at Arsenal or even be sent immediately out on loan.

But for Paulo Freitas, the Brazilian head researcher at Football Manager, it was no surprise to see the young forward get his move to Europe.

Martinelli’s talent was already well known in his homeland, with Freitas having been made aware of the teenager a long time prior to his switch to the English capital.

Football Manager, the era defining management simulation game, remains the market leader in its field and its scouting network is as far reaching as some of the biggest clubs in Europe.

“The scouting teams vary in size, from only a couple in some smaller countries or leagues to hundreds in some bigger leagues or countries.

“Researchers who research different clubs, leagues and countries keep in touch with each other, which helps to avoid issues like one league or country getting too overrated or underrated.”

When clubs sign lesser-known youngsters from abroad, supporters often look to Football Manager as a source of information when trying to find out more about their team’s new arrival.

Not just in terms of their ability at the time of joining, but at their possible level of potential - such is the esteem that Football Manager’s scouting network is held around the globe.

So what work does go into ensuring that the world’s best talents are spotted and included in the game and how does the process differ to the scouting network at some of the biggest clubs on the planet?

“It's a bit different as a real life football scout evaluates a player according to the needs of a club, whereas in Football Manager we evaluate both a player and full squads,” Freitas explained. 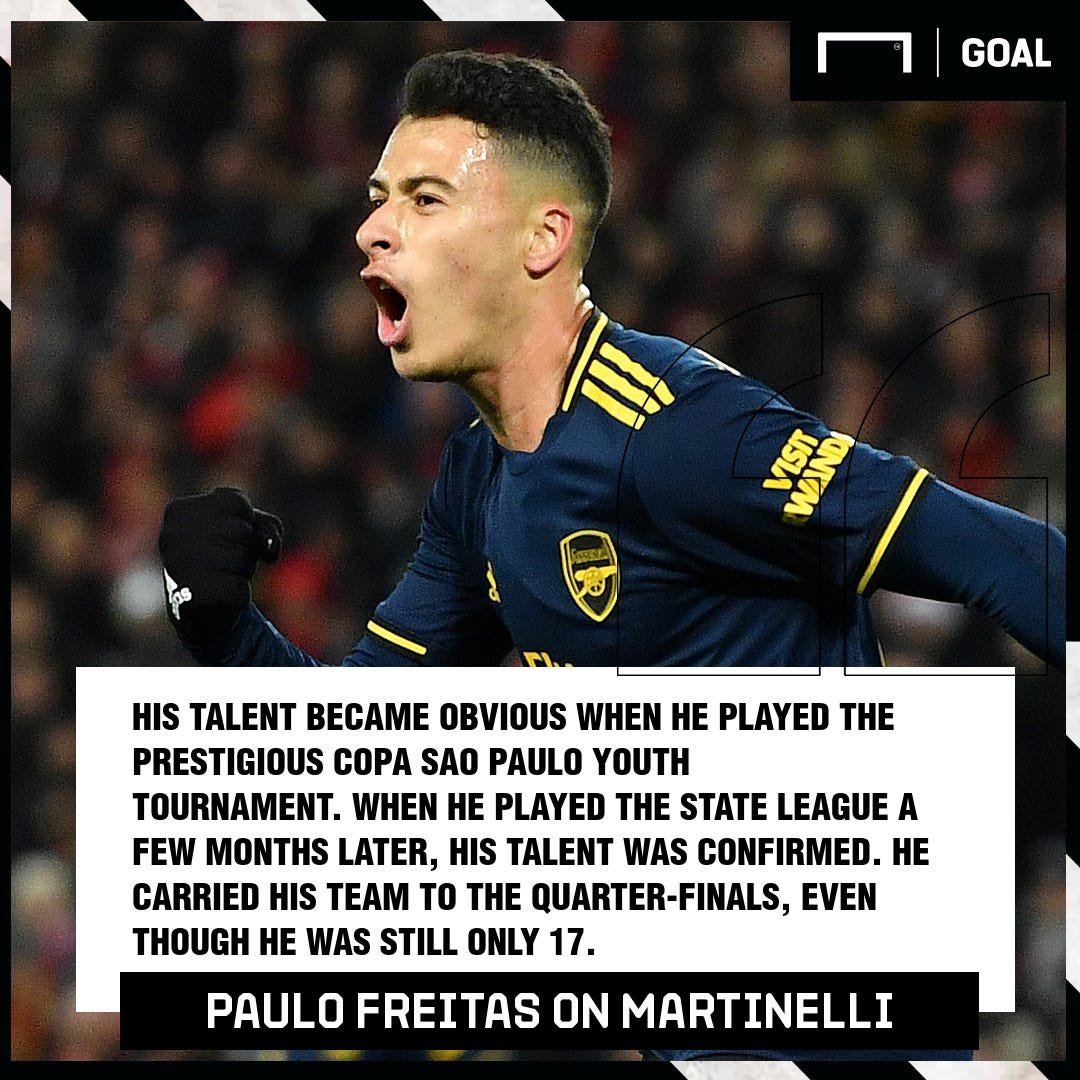 “So we focus less on a single player than a real life scout does, but focus more on several players and how they interact with each other.

“The amount of times [that a player is watched] varies, there isn't a predefined amount, but the idea is to watch a few times at least, and other times during the season as the situation of a player changes.

“The information we gather has to be converted to numbers as the attributes of a player are rated that way in the database.

With competition for the world’s best young talents as fierce as ever, tip-offs from contacts can be key to ensuring clubs get a head-start when it comes to getting any potential deals done.

And at Football Manager it is no different.

“It happens sometimes, but it varies from country to country depending on the popularity of Football Manager,” said Freitas.

“It happened with Gerson, who was at Fluminense's youth setup at the time, and went on to become a top player for the club, then moved to Europe, where things did not work out well.

“He is now a key player for Flamengo and expected to be called up for the national team.”

And what about Martinelli? 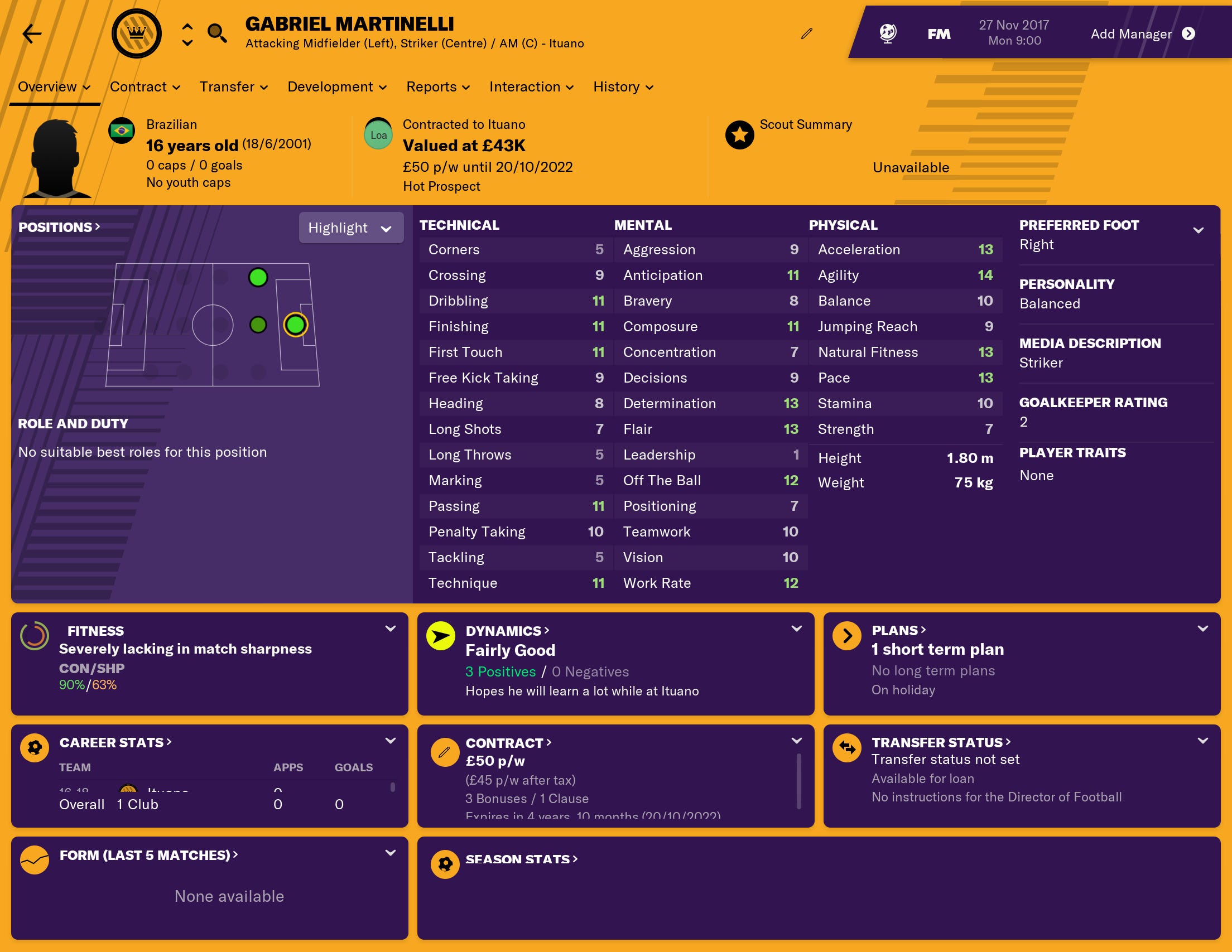 “I didn't personally scout him because he was playing in the state of Sao Paulo, while I live in Rio, but I did follow his progress since he was playing for Ituano's youth setup,” added Freitas.

“His talent then became obvious when he played the prestigious Copa Sao Paulo youth tournament, even though his team did not go far.

“When he played the state league a few months later, his talent was confirmed as he carried his team to the quarter-finals, even though he was still only 17 years old.”