KPMG has devised an algorithm to determine the true value of football teams, placing the Red Devils ahead of Real Madrid and Barcelona

KPMG has named Manchester United as the world's most valuable football club, becoming the first ever club to have an enterprise value of over €3 billion.

Jose Mourinho's Europa League winners have climbed above Real Madrid into top spot after experiencing a seven per cent increase on last year's value, while Barcelona, Bayern Munich and Manchester City also feature in the top five most valuable teams.

The Dutch auditors have devised an algorithm which takes in not only a club's revenue, but is a combination of five three factors: profitability, popularity, sporting potential, broadcasting rights and stadium ownership. The combination of all these factors produces the Enterprise Value (EV).

Following their second place finish in the Premier League, Tottenham now have one of the 10 highest EVs, with English clubs featuring strongly in the top 10. 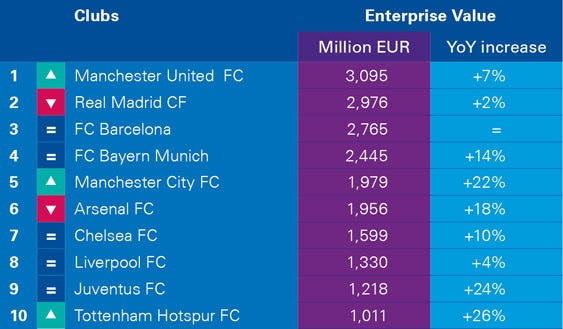 Broadcasting rights are a key part of KPMG's algorithm, with the Premier League's worldwide rights worth €9.5 billion split among the teams. This is reflected in how English clubs dominate the list, with KPMG's Global Head of Sports Andrea Sartori underlining its importance.

"The aggregate value of Europe's 32 leading football clubs suggests that the overall value of football, as an industry, has grown," Sartori said.

"While this is partially explained by football's broadcasting boom, the internationalisation of the clubs' commercial operations, their investment into privately-owned and modern facilities, and overall more sustainable management practices, are also key reasons for this growth.

"In terms of media rights value, the English Premier League sits comfortably at the top of European leagues, although other major leagues have outlined well-defined strategies to compete for the attention of global fans."