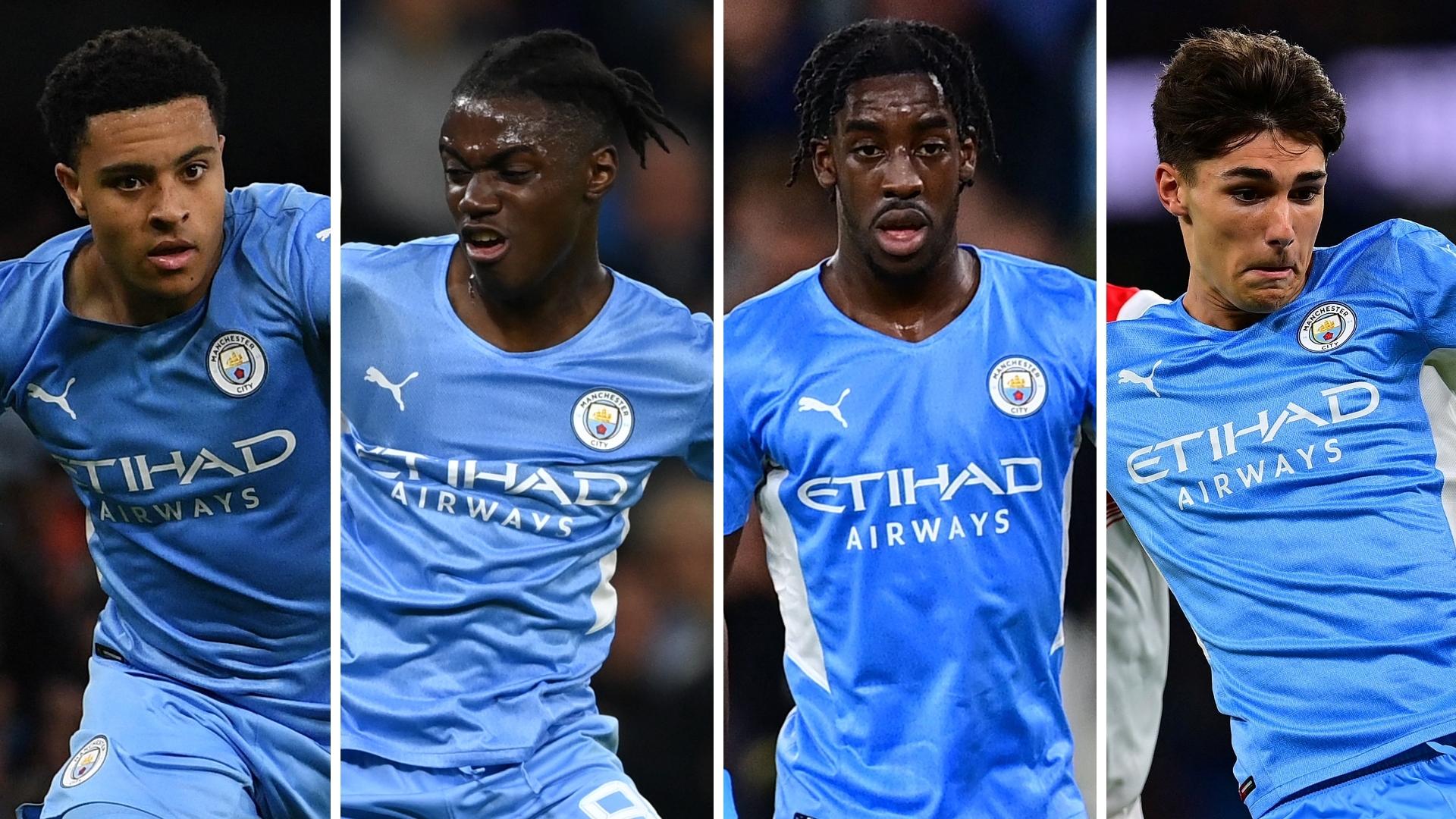 Romeo Lavia, Luke Mbete and James McAtee were just some of the Premier League champions' academy stars who played their part in beating Wycombe

With an injury crisis to contend with and the knowledge that Manchester City face an intimidating triple-header against Chelsea, Paris Saint-Germain and Liverpool next week, Pep Guardiola turned to the clubs academy for Tuesday's Carabao Cup clash against Wycombe Wanderers.

The City boss handed starts to five teenage debutants at the Etihad Stadium, with a sixth - James McAtee - coming off the bench in a relentless 6-1 victory for the Premier League champions.

Challenging for a record fifth-straight Carabao Cup title and aiming to hold onto an unbeaten record in the competition that dates back to October 2016, the youngsters did not let Guardiola down.

“It’s one of the nights when I love to be manager,” the City boss said after a game in which a seventh academy graduate, Cole Palmer, scored his first professional goal. “We have the feeling we have talented players and we can count on them.

“They train with us every single day. They don’t make bad faces, they don’t make you feel uncomfortable in your decisions. They just have the desire to be something in world football.”

So how did they each fare? Goal runs the rule over six youngsters who made their debuts against the Chairboys...

If Lavia felt any nerves going into his first senior appearance, then they did not show.

Just 10 seconds into the game and under pressure from two Wycombe players, the Belgian midfielder demanded the ball and played a neat square pass to set City off on an early attack.

It was the sort of basic tactical move that you would associate with Sergio Busquets, Philip Lahm, Fernandinho or any of the defensive midfielders that have played the role for Guardiola, who sees the position as being pivotal to his system.

While it was only against League One opposition, it showed why there is so much excitement within the City academy around the 17-year-old, who joined from Anderlecht in the summer of 2020.

Lavia linked the defence and attack and was not afraid to make the occasional tactical foul, although a 40th-minute booking suggests he can still pick up some tips in the dark arts from his mentor Fernandinho.

Eighteen-year-old left-back Wilson-Esbrand spent the evening with his focus more on attacking than defending, and he showed what a danger can be in the final third.

Striking up an early connection with Raheem Sterling, Wilson-Esbrand played two neat passes inside Wycombe’s defence to set the England international away while making a couple of overlapping runs himself.

A night to remember for these four… #mcfc pic.twitter.com/wwsrxzOuCM

With the score still at 1-1 shortly before the break, it was Wilson-Esbrand that created the second goal. First he squared up defender Jason McCarthy, before darting past him and pulling back a perfect cross for Riyad Mahrez to slash home.

Replaced on 72 minutes, he earned a standing ovation from the Etihad Stadium faithful and an embrace from Guardiola.

Whatever happens going forward for Burns, the centre-back is highly unlikely to come up against a striker quite like Adebayo Akinfenwa ever again.

The 16-stone (100kg) striker would be unplayable for even more experienced centre-backs due his huge physical strength and bustling style.

And the early signs were worrying from a City perspective, as Akifenwa won an early foul to set up a dangerous free-kick, bullied Burns into a mistake shortly after and helped cause havoc for Wycombe’s opener.

But 18-year-old Burns settled down quickly, learning how to play his opponent and knowing when to drop off.

When Akifenwa was replaced on 65 minutes, Burns could be happy with how their duel played out.

Guardiola has mentioned the potential of centre-back Mbete in the past 12 months, and the 18-year-old's first-team debut will only have added to the hype that is around him.

After an early flourish from the visitors, City’s back-four found their composure and were rarely under threat.

Mbete was the calming influence, and took up good positions to quickly snuff out potential for any counterattacks.

Possibly more impressive was his confidence with the ball at his feet, boldly striding out of defence on more than one occasion before picking out his more senior team-mates, who in turn were unforgiving to their League One opponents.

Perhaps the quietest debut of the six on show, but full-back Egan-Riley barely put a foot wrong.

The Manchester-born England Under-18 international got forward well as City dominated possession.

I'm sure they will remember, the 21st night of September 🙌

He was unlucky not to get an assist when he picked out Phil Foden with a cross that the homegrown midfielder flicked into the arms of goalkeeper David Stockdale.

Seconds later, Egan-Riley was the furthest player back in defence to ensure there was no threat of a counterattack.

A 72nd-minute substitute, the ‘Salford Silva' still had time to show his attacking ability as Wycombe began to buckle.

With 13 goals and three assists from his eight age-group appearances for club and country this season, 18-year-old McAtee is a big threat.

And though he spent some time at left-back after coming on, he almost created a goal for Palmer with a neat pull-back, but the 19-year-old could not quite find a finish.