“I can’t put it into words really. Crazy!”

Rhys Williams is in reflective mood, and no wonder.

If 2020 was a strange year for just about everybody, for the Liverpool youngster it was downright remarkable.

From the Conference North to the Champions League to marking Harry Kane, and all in the space of nine months.

“Yeah, I wasn’t expecting it all to be honest!” the 19-year-old tells Goal , puffing out his cheeks.

It certainly is, and it is clear to see that Williams is loving life right now. Injuries have given him his chance, one he is determined to take.

“Up until the West Brom and Aston Villa games, I think I’d been doing alright to be honest. I’ve just got to keep working hard to get that consistency.”

Williams is certainly picking up experience. Prior to this season he had barely even trained with Liverpool’s senior squad, and as recently as March he was playing for Kidderminster in the sixth tier of English football.

But having started the campaign for Liverpool’s Under-23s against Everton, things were about to change. A new five-year contract arrived in September, along with the news that he would not be heading out on loan to the Football League, as he had expected.

Instead, manager Jurgen Klopp wanted him with the first-team group. His chance had arrived. 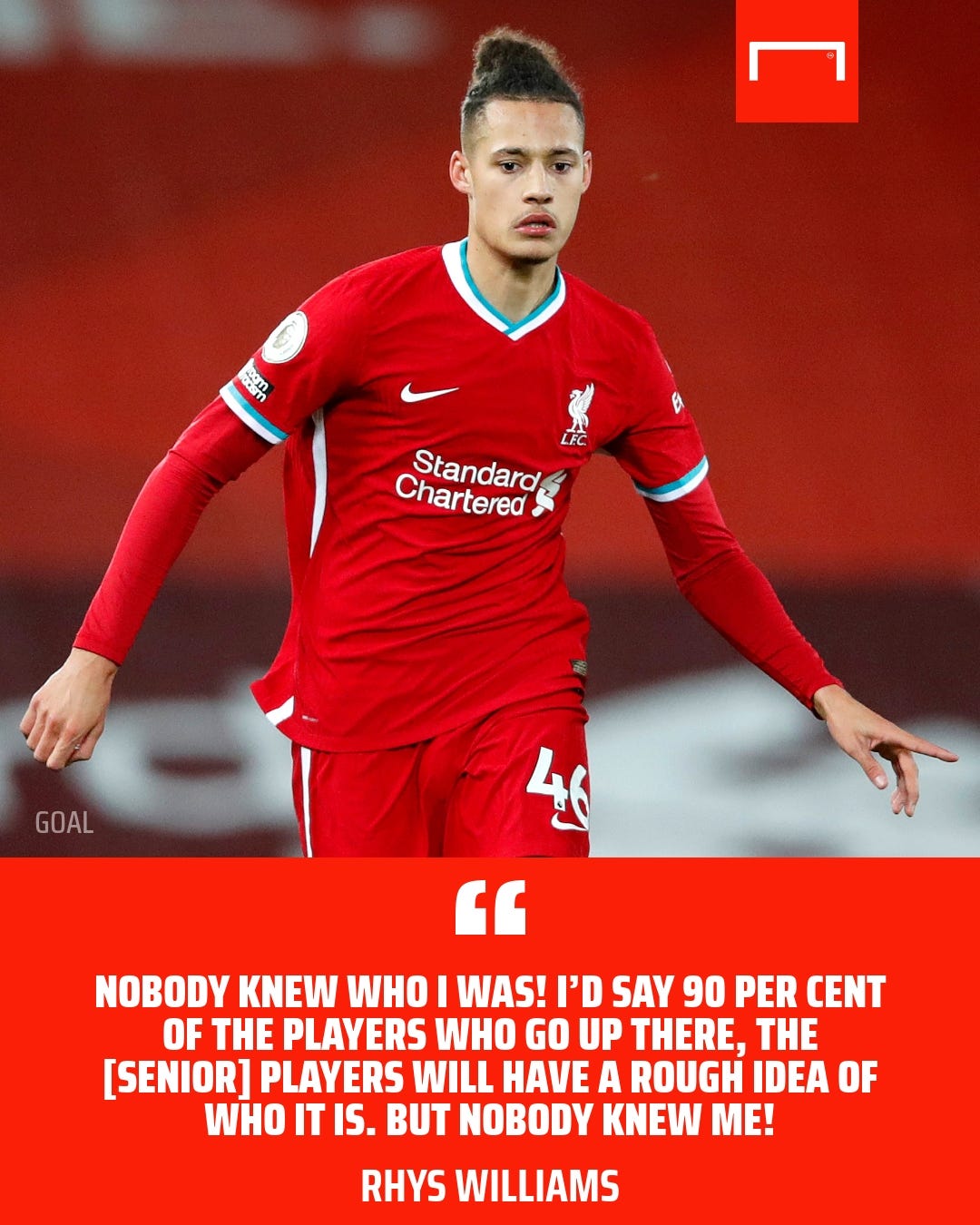 “Nobody knew who I was!” he smiles. “I’d say 90 per cent of the players who go up there, the [senior] players will have a rough idea of who it is. But nobody knew me!

“I was nervous, but I just wanted to showcase my ability. I think I did that, and I got my chance against Lincoln.”

Williams’ debut was successful, a 7-2 win in which he started alongside Virgil van Dijk and finished next to Fabinho. A week later came his first Anfield appearance and his first clean sheet, shutting out an Arsenal side containing the likes of Bukayo Saka, Nicolas Pepe and Alexandre Lacazette.

Then came the injuries. First to Van Dijk and then to Joe Gomez. With Liverpool depleted, Williams made his Champions League bow as a late substitute in the win over Ajax, and his first European start in the memorable win away at Atalanta. He actually appeared in all six of the Reds’ games as they topped Group D to reach the last 16.

Then, in December came the big one - his Premier League debut against Tottenham. A top-of-the-table clash against Harry Kane and Son Heung-min, with 2,000 fans inside Anfield.

“I found out at about 12.30 on the day of the game,” he remembers. “We were all sat round eating, and we were waiting for Joel [Matip] to come to the hotel.

“He’d had a problem with his back and everyone was like ‘Joel’s still not here, Rhys!’ I was like ‘oh my God!’

“Then Pep [Lijnders] pulls me and tells me Joel has failed his fitness test and I’m going to have to step in. I was sweating, I won’t lie!

“I knew I might have to, but I probably thought Joel would make it, so I was scrambling to get my mind together to be honest. I just needed to compose myself.” 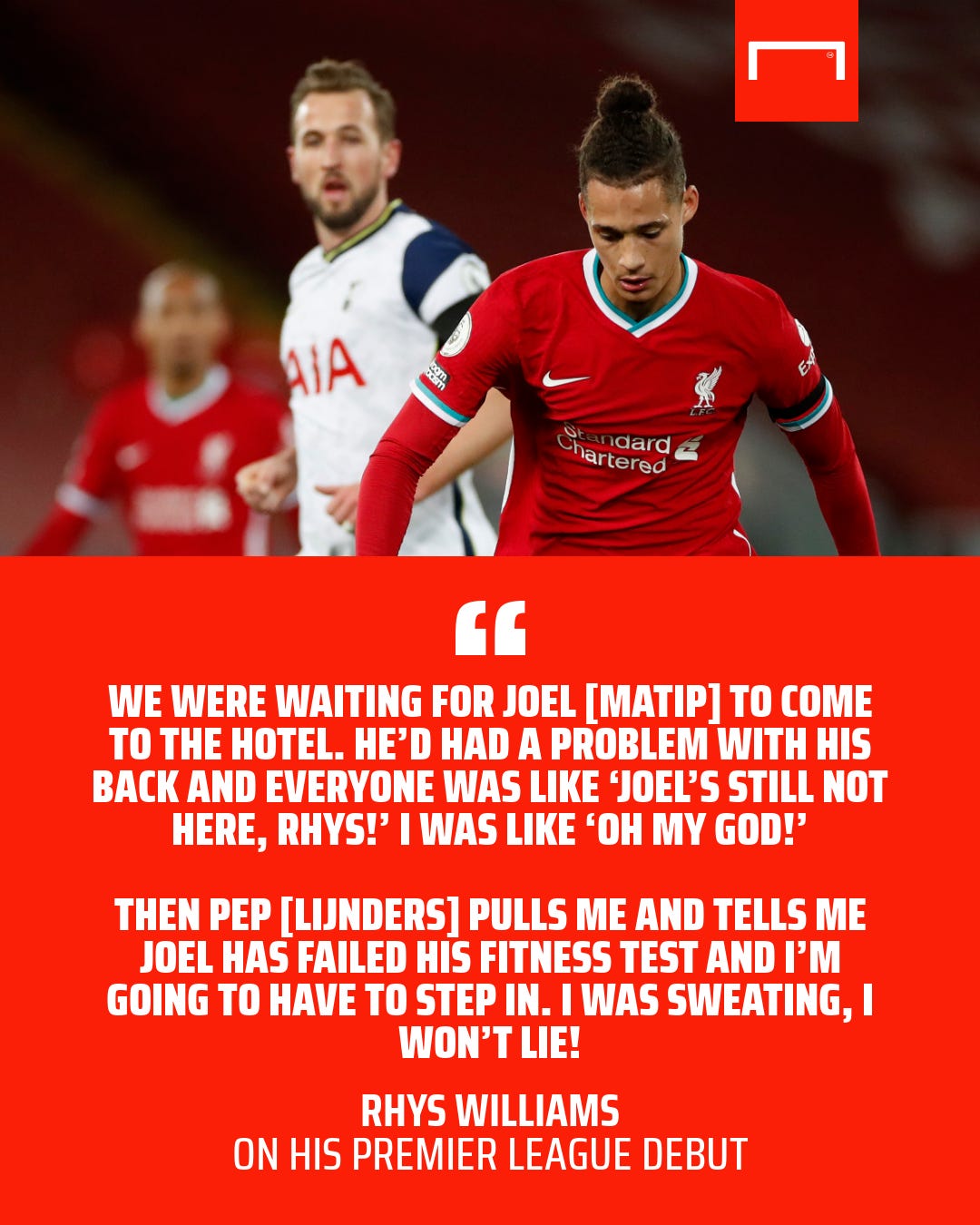 He managed that, performing admirably as Liverpool, courtesy of Roberto Firmino’s late header, won 2-1 to go top of the table.

“Yeah, it wasn’t a bad debut for me!” Williams smiles. “When you’re coming up against the most in-form two in the Premier League, you don’t need any extra motivation. If you can’t motivate yourself for that, then I don’t think you should be playing!

“I was just thinking ‘keep it simple’ and to try to stop the problems at source, before Kane can slip Son in. We did that for most of the game, but obviously the one time Son got free, he scored. It showed you’ve always got to be on your toes.”

Klopp was certainly satisfied. “Oh my God, outstanding!” was his assessment of the youngster’s performance. The hug between the two at the final whistle told its own story.

“It’s massive,” Williams says. “As a young player, coming into a Liverpool team like this, off the back of a title-winning season, and then the manager is putting his faith in you, it gives you so much confidence.

“When I went to the seniors, he just said ‘you’re obviously capable enough to be here, that’s why you’re here, so don’t doubt your ability, play like you would do in any other game’.

“All he asks is that you give 100%. If you try something and it doesn’t come off, he can accept that if it was the right thing to try. But if you are not trying to put a challenge in or you’re lazy, he can’t accept that and neither can his players.

“That’s why the team has been so successful, because nothing less than 100% is accepted.” 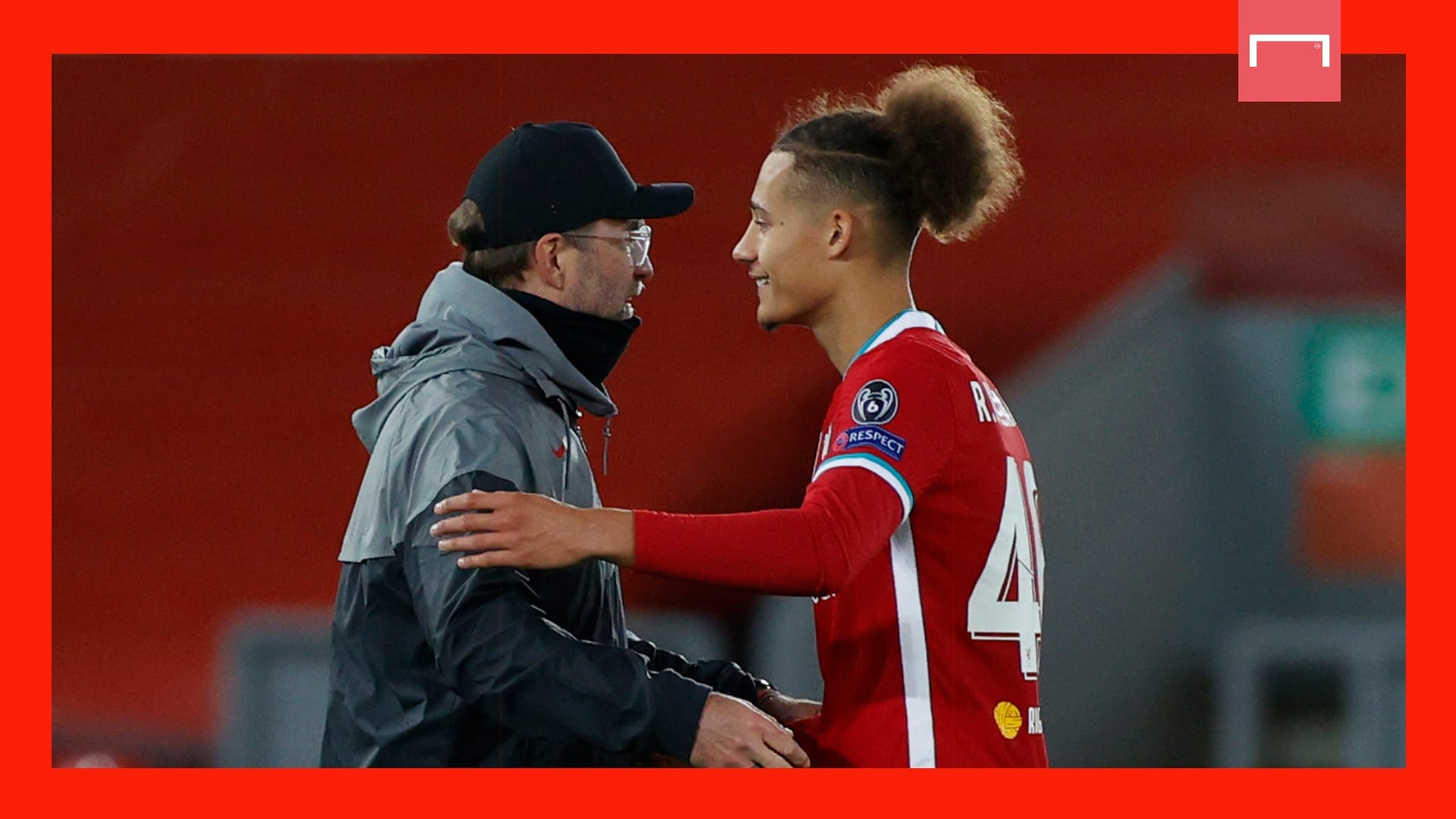 Williams laughs as he talks about the training level at Kirkby. Often, he will be part of the ‘Yellow Team’, the non-starters who are tasked with taming the likes of Firmino, Mohamed Salah and Sadio Mane in an 11 v 11 match on a Friday.

“It’s a headache!” he says. “There’s been a complete step up in my game in terms of defending, I’d say, because trying to defend against those three, it’s a pain.

“They train like it’s a match, so you know you’ll get 100% from them, no matter what. They’re never not up for it. It’s a nightmare defending against them!”

Williams believes his loan at Kidderminster, where he made 26 appearances, was “the best decision me and the club could have made.” It taught him to grow up fast, to learn the basics of defending; concentrating for 90 minutes, using his body to cope with physical forwards, why heading is as much about timing as it is height.

It also introduced him to the harsh realities of adult football. He accepts, for example, that scrutiny will always be part of a footballer’s life, especially at a club such as Liverpool.

“Criticism now, if you can deal with it then I think you’ll go far in the game,” he says. “You have to accept that not everyone is going to have a nice opinion, or the opinion that you think is right.

With Van Dijk and Gomez still sidelined, and with Matip’s fitness record patchy, to say the least, more opportunities are likely to come Williams’ way between now and May.

“It gives you another 10% in matches, because you know it could be your last opportunity,” he says. “When the big players are back, chances are going to be hard to come by.

“For now, I just try to impress him [Klopp] in every game, every training session, so that if he does give me an opportunity, I’ll be there to take it.

“In the Premier League, every game is difficult no matter who you’re playing. But if I’m on my game 100%, playing as well as I can, I think I can cope.”