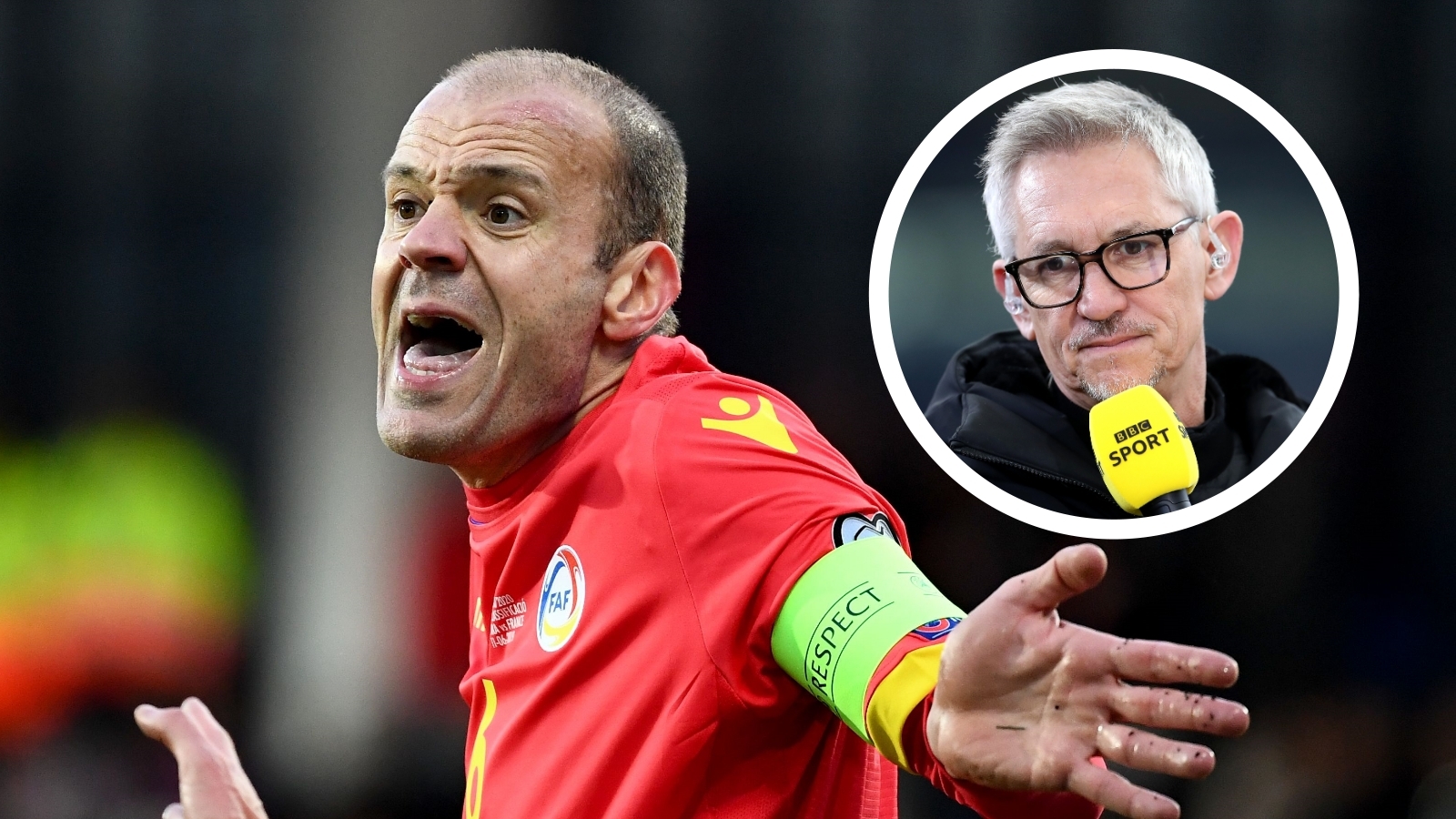 The European underdogs face the Three Lions at Wembley on Sunday, and their most-capped player is out to prove they have every right to be there

"Gary Lineker is lucky that he was born in England and not Andorra."

Those the thoughts of Ildefons Lima when asked about the ex-England striker's assertion that smaller footballing nations should be forced to qualify for the right to take on more established countries in competitive fixtures.

Lima, a 130-time Andorra international, has played against some of the greatest players in recent football history, but if Lineker had his way, his country would have to pre-qualify for World Cup qualifying.

As England were running out 5-0 winners against San Marino in March, Lineker tweeted "Surely we’ve reached the stage where the lowest ranked nations should play amongst themselves to qualify for the right to play at this level. It’s become absurd."

For Lima it took almost 20 years before he played in a competitive win for Andorra, but he was proud lining out for his country in every single game before their historic 2017 victory over Hungary.

He is still lining out for them in 2021, and at 41 is likely to play at Wembley Stadium on Sunday when England host Andorra in what Lima describes as being a "party".

"If Lineker was born in Andorra, he could not play against big teams? Why? It's a country like England is a country," Lima tells Goal.

"You can even try out other players, other tactical systems. It's good for football that there's this type of football. It's not the football of money, the number of Instagram followers you have, or anything like that. It's a football that's more pure."

On Sunday's encounter, he adds: "The England game is a big game, but for us, the game against San Marino is more important. It's a chance for us to win a game.

"The game against England will be a party for us. We are lucky to play in a stadium like Wembley against the England national team with an amazing atmosphere against these big players.

"We will try to enjoy it, but also to do our job. I remember three years ago against Turkey in Istanbul, we only lost the game in the 88th minute. We will try to work hard, to do as well as possible, but I tell the young players that they need to enjoy this atmosphere because maybe it will only happen once in their lives."

It is unlikely that Andorra will feature at a World Cup any time in the foreseeable future, but the introduction of the Nations League means that not only do Andorra get to play against similarly-ranked teams, but they also have an easier route to the European Championship.

"It's very good because small teams need to play competitive games," he explains.

"Big teams have to play against small teams to know they are big. It's not a big deal for big teams to play against national teams like us once a year because it's good for football and the spirit of the game.

"Fans prefer to play against Brazil or Spain, because playing small teams is a funny type of football. But players like us play with the soul and are proud to represent our country."

Surely we’ve reached the stage where the lowest ranked nations should play amongst themselves to qualify for the right to play at this level. It’s become absurd. @FIFAWorldCup

Lima is one of only two players to have played international football in four different decades, and now holds the world record for the longest international career.

He made his debut in June 1997, just a year after Andorra became a UEFA member. Since then, he has seen many changes in football on and off the pitch and this has helped turn Andorra into a more competitive side.

In the 2018-19 Nations League, they were unbeaten at home despite playing in a tough group including Georgia, Latvia and Kazakhstan.

Wins like that 2017 victory over Hungary are still extremely rare, but Andorra are definitely better prepared, no matter the level of opponent.

"We played our first game in 1996. I played from 1997. We didn't know anything about international teams or international players," he admits.

"Now, when a young player arrives to the national team, they haved played with the Under-21s or U19s. They play against big teams and big players, it's the normality.

"At the beginning, we didn't know anything. We were like 500 years ago, when you go to America and discover America, we were like that. We discovered everything. Now, the players know everything before they arrive.

"In 1998, I played against Brazil and I thought that 'a few weeks ago, I was playing with Ronaldo on PlayStation and now he's next to me on the pitch.' Now, you play against Brazil or England, you have big players next to you and it's something normal."

"Now, we study the other teams before we play them. We know how they play, whether they use their right or left foot, we try to know everything about them. A few years ago, we did not have this information. Also, physically, we take care of ourselves better: food, training, rest.

"Twenty years ago, it was different football. Playing a game and drinking a bottle of wine was normal. Now, you have to do everything right to get ready for the next game."

Lima now looks after his diet and limits his alcoholic drinking to ensure he can stay playing into his 40s, but if Andorra can compete with England on Sunday, maybe he will raise a glass of wine in Lineker's honour.