The Reds manager will be without Mohamed Salah, Virgil van Dijk, Trent Alexander-Arnold and Joe Gomez this weekend, but he has other problems too...

Liverpool unveiled their new training ground this week, and its state-of-the-art treatment room has already seen plenty of visitors.

The Reds’ injury woes continue, each passing week bringing with it a new headache, a new dilemma for Jurgen Klopp and his coaching staff.

One can only imagine what Klopp would have made of this latest international break. He does not like them at the best of times.

With Leicester City visiting Anfield on Sunday, Klopp will be forced, once again, to make changes to his starting line-up. It could be one of his more ‘experimental’ XIs.

Liverpool will be without at least three of their first-choice back four, and could be missing their captain and their top scorer too.

Klopp may need to tweak his system, ask players to play new roles or, perhaps, trust in a youngster or two.

Here are his options…

OK, so let’s look at the positives, shall we?

Andy Robertson, for example. Well he missed Scotland’s Nations League game with Slovakia due to a tight hamstring, suffered in the Euro 2021 play-off win over Serbia a few days earlier.

However, he stayed with Steve Clarke’s squad, and started against Israel on Wednesday night. That suggests his issue is not a serious one and that he will at least have a chance of featuring against Leicester. Liverpool will certainly hope so.

Henderson’s situation is slightly more concerning. The 30-year-old was sent home by England after being withdrawn at half-time of the defeat to Belgium on Sunday. 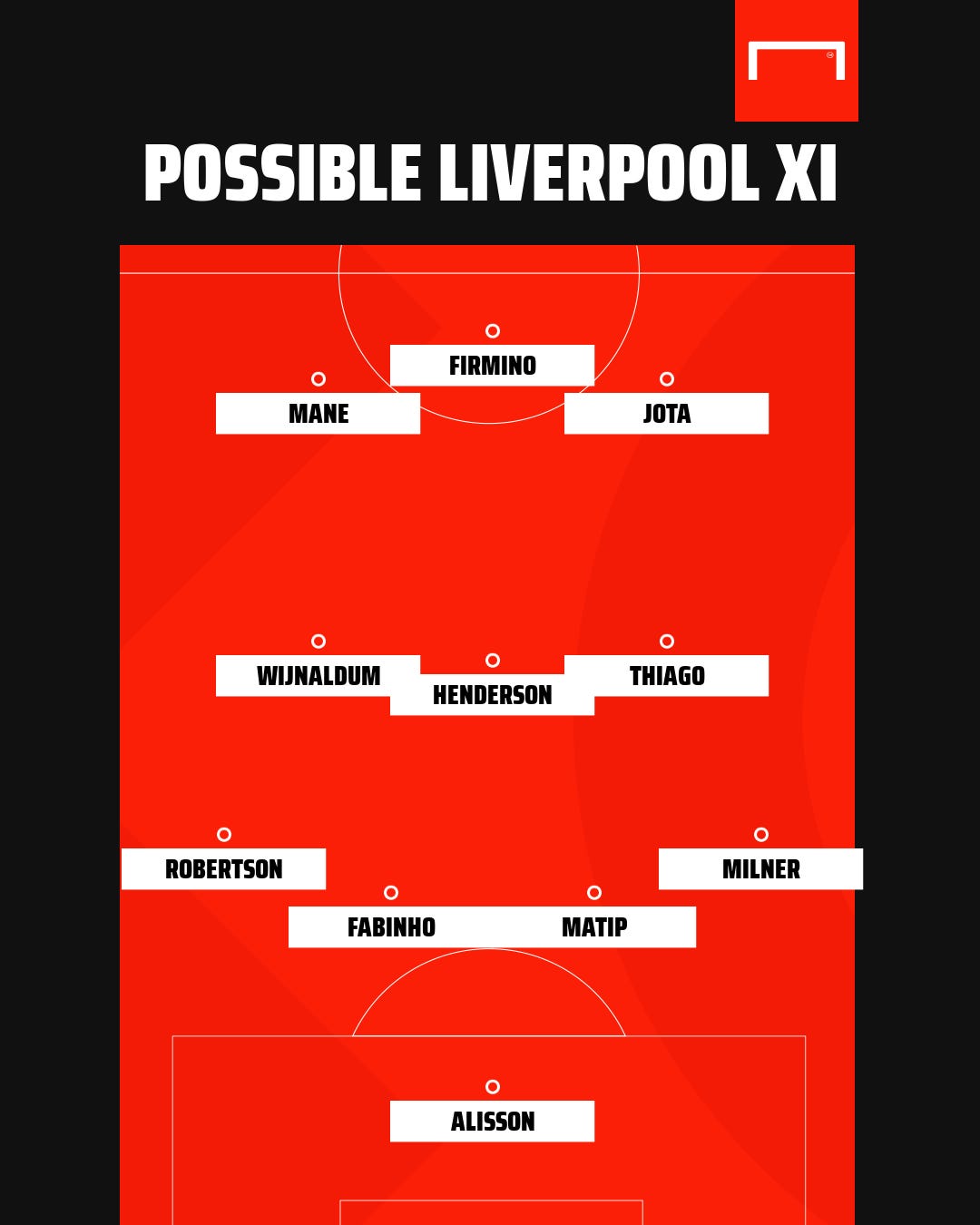 Goal
“Tightness,” said Gareth Southgate, though we should not read too much into him excusing Henderson from what was essentially a dead-rubber against Iceland on Wednesday evening. Raheem Sterling, the Manchester City forward, was also sent home, but is in contention to face Tottenham on Saturday.

Could Fabinho and/or Thiago be back for the weekend? Klopp had hoped to have at least one of them back this week, but neither trained with the group on Tuesday.

Do not expect Liverpool to take any risks with two such important players given the volume of games coming up, but if they were to be available it would certainly change Klopp's thinking ahead of Sunday.

Salah will have to sit this one out after testing positive for coronavirus while away with Egypt, and he joins Gomez, Van Dijk, Alexander-Arnold and Oxlade-Chamberlain on the missing list, with his absence offering another chance for Diogo Jota to shine.

The fixture list has not always been kind to Liverpool, but a Sunday evening kick-off at least offers an extra few hours for tired limbs and tight muscles to recover.

Klopp will certainly hope to have at least a couple of his walking wounded back to face the Premier League leaders.

Right, so what about the other side of the coin? What if none of the news is good between now and Sunday?

Well, it will be a very inexperienced back four, to say the least.

Kostas Tsimikas, the summer signing from Olympiacos, would be in line to make his Premier League debut at left-back for starters, while it looks like it will be between Nat Phillips and Rhys Williams - who himself missed England's U21 win over Albania on Tuesday with a hip complaint - to partner Joel Matip in the centre of defence.

That is presuming, of course, that Klopp does not want to spring a surprise by moving, say, Robertson into the middle.

Phillips is the likelier pick, with Williams' fitness in doubt and needed for the Champions League game with Atalanta next Wednesday. Phillips, remember, is not in the Reds’ European squad.

Midfield would likely see Gini Wijnaldum holding, alongside Naby Keita and one of James Milner, Xherdan Shaqiri or Curtis Jones. 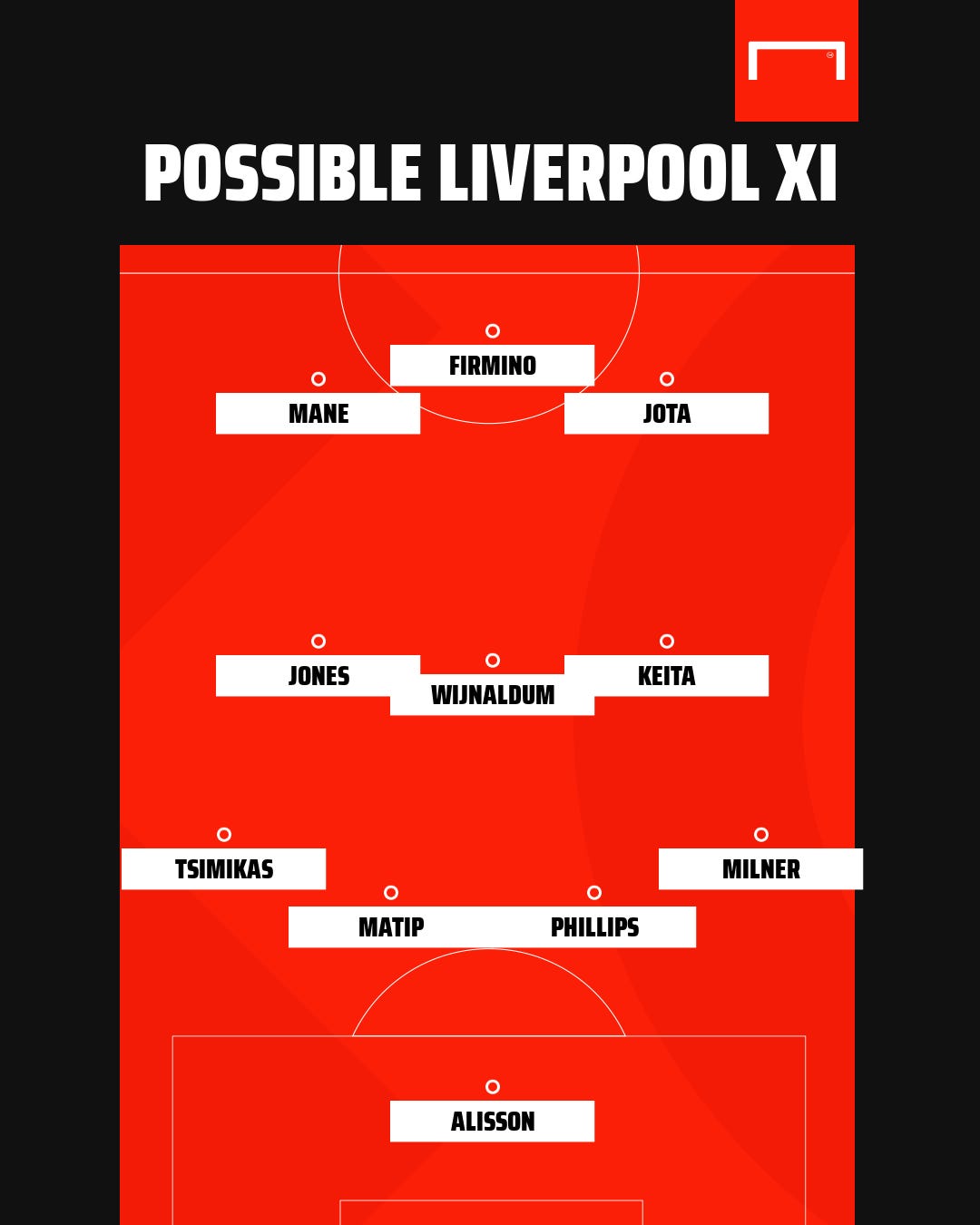 Goal
Milner’s inclusion would add experience, but present a problem at right-back, though teenager Neco Williams is available there.

Jones has done well recently, in particular in the 5-0 win over Atalanta, though if Klopp was to stick with the 4-2-3-1 system he used at Manchester City, then Shaqiri would have a strong case too.

Keita, who scored for Guinea against Chad at the weekend, is back after his own fitness issues.

The attack should be relatively straightforward, with Jota, Sadio Mane and Roberto Firmino all available – for now at least – while the likes of Divock Origi and Takumi Minamino would feature on the bench, where Klopp may also be forced to call upon the likes of Jake Cain, Billy Koumetio and Yasser Larouci.

The manager will, of course, wait as long as possible before deciding upon his starting line-up. Until then, he will just be praying that Liverpool's brand-new treatment room will not have any more new visitors before Sunday.