Gilberto Silva didn’t make too many mistakes in his long and illustrious career, but turning up to an Arsenal training session without any shin pads was one of them.

“I tried it once,” he said. “But then after seeing the way everyone was training, I was not prepared to be without them. It was not safe.”

Gilberto arrived at Arsenal in 2002, just a month after winning the World Cup with Brazil in Japan. By the time he left in 2007, he had won the Premier League title, two FA Cups, two Community Shields and written his name into club folklore alongside the rest of Arsene Wenger’s 'Invincibles'.

It was one of the most successful periods in the club's history and the legendary midfielder points to those training sessions at London Colney as the reason why.

“An Arsenal training session was so intense,” he said. “I believe this is what made us invincible. It was because of this type of mentality. The way we trained was no different to the games. In fact, many times, some training sessions were harder than the games we played.

“It was more difficult because we never pulled back from any of the challenges, none of the players. Sometimes, it was quite scary. Every session was a big battle.

"You had to be at your top level because it was there that everything started for us. It’s where we got prepared for all the games and where Arsene learned which type of player he could count on.”

Stories of training-ground fights were commonplace during the 'Invincibles' era and they are backed up by Gilberto, who witnessed it all first-hand.

“The tension in the training sessions was always there, every day,” he said. “Martin [Keown] was always talking and Jens [Lehman] was screaming from the back. I remember once he told Thierry to come and mark somebody and Thierry said, ‘Jens, stop! It’s too early.'

“We all ended up laughing because this was the type of mentality everyone had and Jens was always focused from the beginning. Training sessions were just the same as a match for him.

“If someone was around him at a corner, he would push them because it was the same in the games. If someone tried to make him angry, he would always push somebody back.” 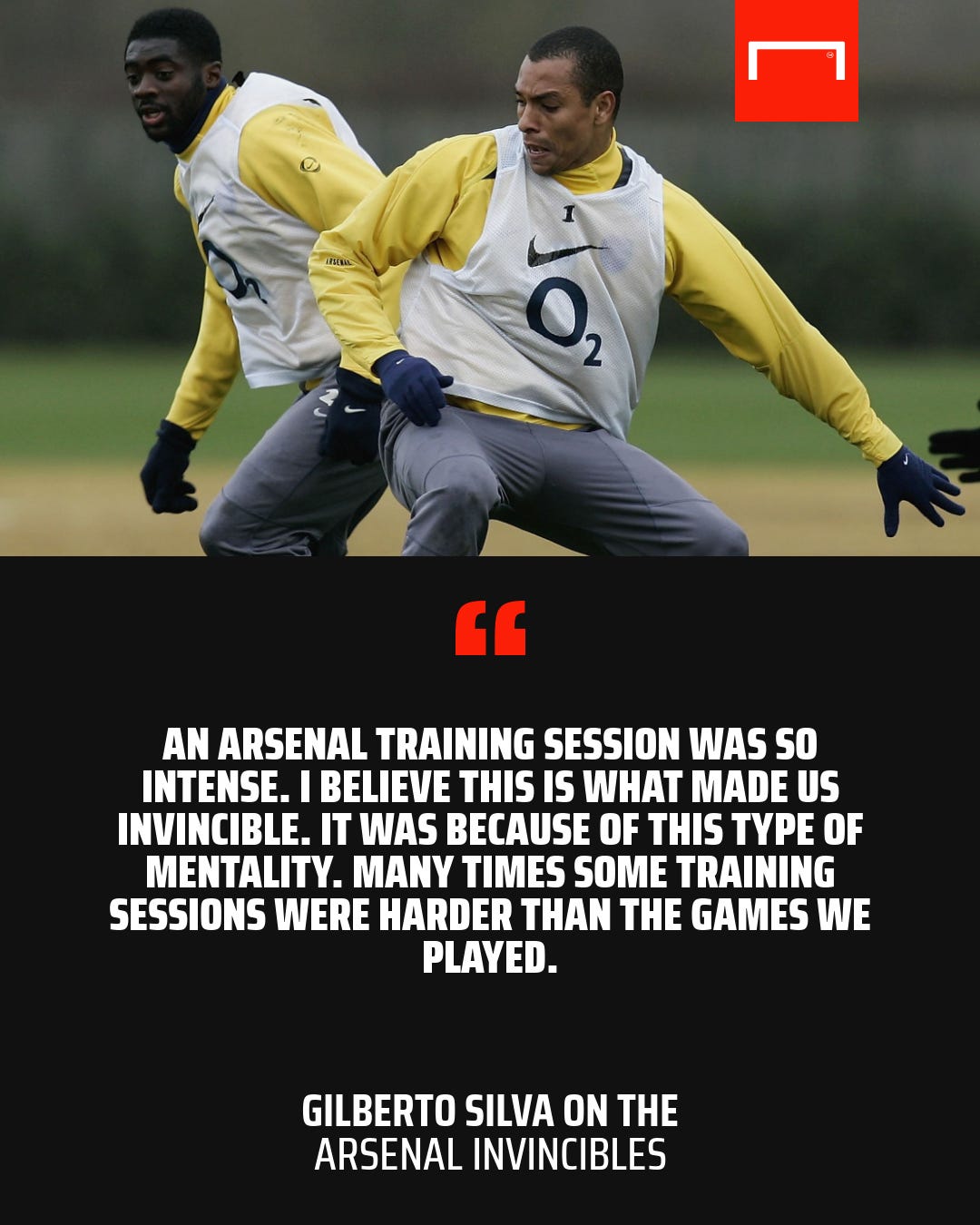 Gilberto added: “I remember once Kolo Toure and Pascal Cygan had a fight in training. They start to have an argument and one hits the other. We all came in and stopped them, and then Arsene sent them to the dressing room.

“I said ‘this isn’t good, they will just fight inside', but when I arrived in the dressing room, they were laughing with each other. This was the mentality. We may have had a problem in the training session, but we solved the problem before we went home.

“I think in this team, everyone would defend each other. Every training session was really hard, but if we went to the game and one of the players had a problem with the opponent, the other would come to help.

“Obviously, in training, some ugly tackles arrived and there were some arguments. But, at the end of the day, everyone respected each other and we would protect each other.”

From the moment he marked his debut with the winner against Liverpool in the 2002 Community Shield at Cardiff, the midfielder appeared to be on a mission to leave a lasting legacy at the club.

Just over a month later, he scored what was then the fastest goal scored in a Champions League match, netting after just 21 seconds during a game against PSV.

He also became the first Arsenal player to score a competitive goal at Emirates Stadium when he crashed home a late equaliser against Aston Villa on the opening day of the 2006-07 season.

“My time at Arsenal was just amazing,” he said. “From the time of my arrival to my departure, it was full of joy.

“I feel fortunate for everything I achieved at Arsenal. My time is full of good memories when I learned a lot with the people, the Arsenal family. It is a feeling I will never forget.” For all the highs Gilberto experienced during his time with Arsenal, there were also lows – especially during his final season with the club.

Having returned to pre-season late following international duty with Brazil, he found himself behind Cesc Fabregas and Mathieu Flamini in the midfield pecking order.

And with Wenger’s young side enjoying a fine start to the 2007-08 campaign, Gilberto’s opportunities became more and more limited.

“This was disappointing for me,” he admitted. “I was frustrated at not being played because I knew I had quality to play and still had the condition.

“I spoke to Arsene and he explained the reasons. I was not happy watching the games from the bench, but I respect all of them because Flamini and Cesc were playing so well.

“It was hard. But this is football, you have to accept it. I tried to do my best to support the team. The important thing was to be there, not be a problem and be ready to help at any time.”

With Fabregas and Flamini forging such a strong partnership in midfield that season, Gilberto was restricted to just 12 Premier League starts.

But without him it looked like Arsenal could still go on to win the title, with Wenger’s side opening up a five-point lead at the top of the table before their visit to Birmingham on February 23. Victory would have taken them eight points clear, but instead disaster struck and the season collapsed.

First, Eduardo had his leg shattered by a Martin Taylor tackle and then, with just seconds remaining, Birmingham were awarded a controversial penalty and snatched a 2-2 draw.

The France defender, who was Arsenal captain at the time, was so incensed by the concession of the late penalty that he opted to sit on his own on the pitch after the final whistle, rather than join his team-mates in the dressing room. 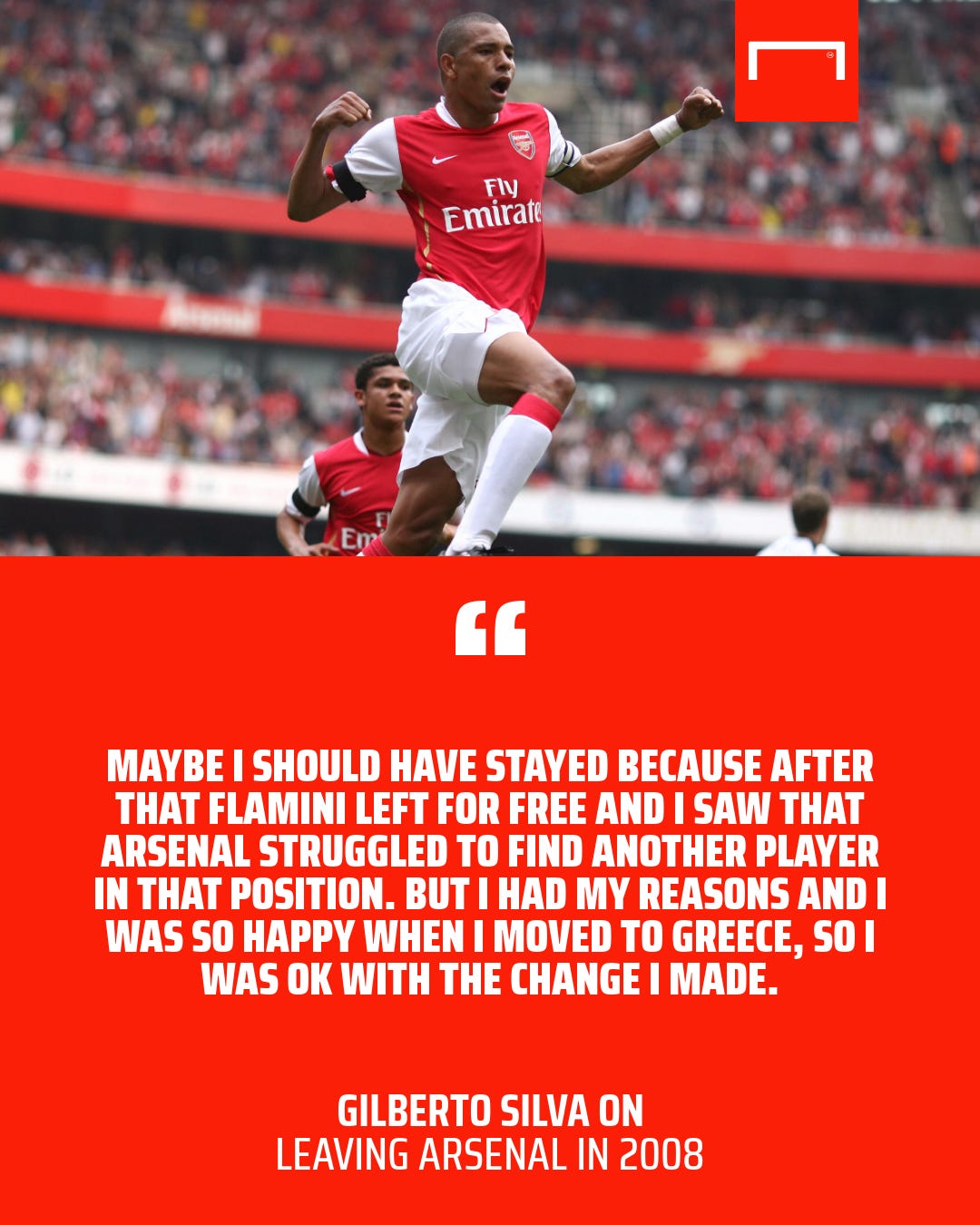 “We didn’t expect that from the captain,” said Gilberto. “I have great respect for William as a person and as a professional, but his attitude at that moment was not the best.

“Arsene told him to stop in the dressing room and I spoke to him and told him it wasn’t the time. At this sort of time, leadership is so important to give the others the support they need because we were at a fragile moment where we lost a player with a bad injury, and the result was not so good.

“It was a moment where we had to embrace everyone and look for the next game. In Brazil, we have a saying that you have ‘to wash your dirty clothes at home’. I think this is what we should have done on that day.

“I think the team destabilised from that moment. I don’t know if there were some ingredients missing to make something happen, but we could not get the results we expected after that and things were not so good.”

After the draw at Birmingham, Arsenal won just one of their next seven games in the league and went on to finish third in the table, four points behind eventual champions Manchester United.

It was a painful culmination to a difficult year for Gilberto and he would join Panathinaikos soon after, ending his five-year stay in north London.

So, looking back now, does he have any regrets about his time with Arsenal?

“No, no," he insisted. “When I left, I had one more year of my contract. Maybe I should have stayed because after that Flamini left for free and I saw that Arsenal struggled to find another player in that position.

“So, maybe if I say something about regret, it would be about this and not having the patience to stay. But I had my reasons and I was so happy when I moved to Greece, so I was OK with the change I made.

“I had three years in Panathinaikos, I was very happy there and the fans treated me well. I had a good time, football, family and the lifestyle.”