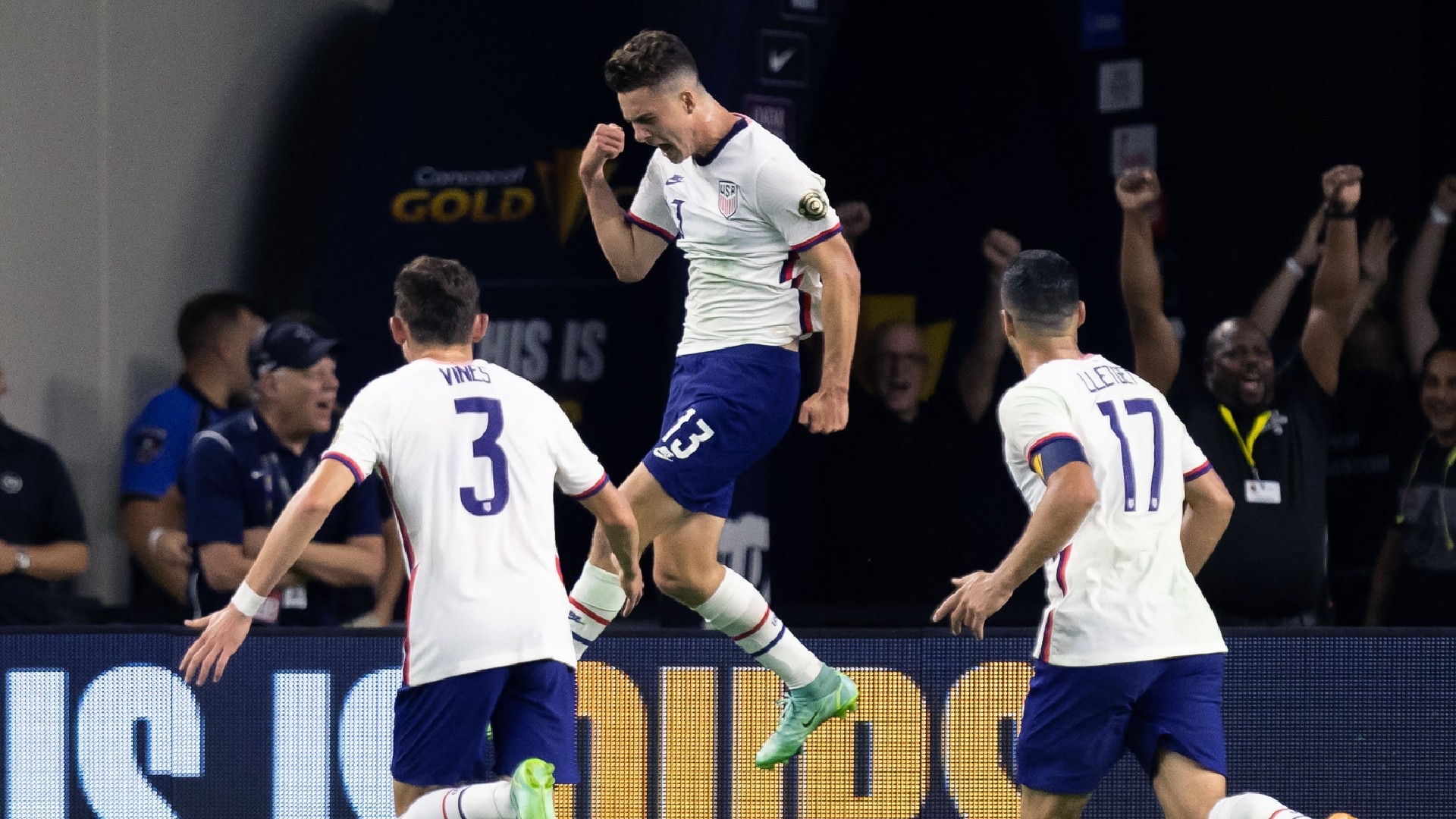 Gregg Berhalter has explained why he stuck with Matthew Hoppe until the final moments of Sunday's Gold Cup quarter-final clash with Jamaica as the U.S. men's national team (USMNT) forward stepped up with a game-winning goal just seconds before being subbed off.

Set up by a far-post cross by substitute Cristian Roldan, Hoppe's goal came from a header in the 82nd minute, pushing the U.S. into a semi-final clash with Qatar on Thursday via a 1-0 win over the Reggae Boyz.

Having taken off Daryl Dike earlier in the second half, Berhalter says he knew it was the right call to stick with Hoppe until the game's final moments, and he was proven right as the young forward scored a memorable first USMNT goal.

"I think the way he was able to get chances, he had a couple of clear looks at goal, and that's due to his movement in the box,"  Berhalter said of Hoppe, who earned his third USMNT cap.

"He was grinding. When a guy puts that type of effort in and hangs in there and keeps going, we want to stick with him because we thought he was doing a good job and because he's goal-dangerous.

"It was great to see him score. Roldan made a great play, but it's also something we talked about: when there's no space between the backline and goal, we got to get it to the far post, and so it was a good play."

Acosta shines as a No 6

While it was a youngster that scored the game-winner for the U.S., one of the standouts was veteran midfielder Kellyn Acosta.

Playing as a No 6,  Acosta helped the U.S. control the midfield for stretches against an underrated Jamaica team that provided plenty of tests for the young USMNT squad.

With the U.S. still trying to find a reliable backup to starting defensive midfielder Tyler Adams ahead of World Cup qualifiers, Acosta has impressed in the role in recent weeks after being out of the national team picture for nearly two years.

"When I think about Kellyn and the game he had today, we challenged him before the game," Berhalter said. "We said, 'listen, this is going to be a physical game, it's going to be a difficult game and we need you in the sense of you winning tackles, winning duels but also controlling the game with the ball'.

He's done it before so we were very comfortable that he would do it again and I thought he had a strong game."

Turner not worried about goalkeeper competition

ZacK Steffen may very well be the USMNT's No. 1 goalkeeper, but the Manchester City shot-stopper does have a competitor to keep an eye on.

Matt Turner put in another strong performance for the U.S., making several acrobatic saves to preserve the clean sheet.

The 27-year-old New England Revolution goalkeeper finished with five saves on the day and has conceded just one goal this summer as he makes his case ahead of qualifiers this fall.

"Overall, I'm not really like looking too hard at myself in the mirror," Turner said. "At the end of the day in knockout football, it's about the end result, and we were able to get the win today.

"Obviously, a clean sheet is huge and we broke them down in the end, got the goal so it was a great performance on all fronts and we're looking forward to being in Austin [for the semifinals].