In an exclusive interview with Goal, the giant goalkeeper discusses his long and painful road to recovery after breaking his leg two years ago

As Jamal Blackman lay in the medical room at Leeds United's Thorp Arch training facility with a searing pain running through his left leg, his brother spoke to members of the club's staff.

The on-loan Chelsea goalkeeper had been sharpening his skills in an Under-23s game against Bristol City on November 16, 2018 when he was involved in a heavy collision with forward Beryly Lubala that led to him to being stretchered off the pitch.

Blackman knew the injury was bad. But he only realised how bad when he saw his brother talking to Leeds' medical staff.

"His face let me know instantly that it was more serious than first thought," the 6'6" (1.99 metres) shot-stopper tells Goal.

It was not his brother who broke the news that he had fractured his tibia, though; it was Marcelo Bielsa, who had been poised to give Blackman his first senior start for Leeds.

"The manager had come to watch the game as it was a midweek friendly to get me ready for a game at the weekend," Blackman explains.

"When he arrived into the medical room, we had quite an emotional chat. He told me what the injury was, he gave me a hug and said he was sorry.

"Then, then the medical staff took over, explaining exactly what damage had been done, and how I could recover."

Blackman was promptly taken to Leeds General Infirmary, where he underwent an operation which involved a metal rod being inserted into his leg.

He was told that the road to recovery would be long and arduous.

"It was my first serious injury and it was a big learning curve from me," Blackman admits. "But I was lucky to have support from Leeds and everyone else around me. Old managers and old friends were in touch, too.

"Chelsea were also there to sort out all of the medical details, and the fact that I could do physio with them really did help. I knew I could trust them. They have experience in these situations.

"Then, I had my family and friends to help me with the mental side of things, which was important as I was out for 16 months. It was a frustrating time. I just wanted to be out playing football with friends so it was hard, particularly as I was close to where I wanted to be at Leeds.

"But setbacks are part of life and anyone’s career."

That philosophical attitude towards his injury partly stems from the fact that he was not alone in Chelsea's treatment room.

"I did part of my rehab alongside Ruben Loftus-Cheek, Reece James and Marko van Ginkel," he reveals. "We all were there trying to get back fit together and it gives you positive vibes.

Indeed, Blackman found that it took some time for the psychological scars to heal too. A loan move to Vitesse at the start of last season was key in that regard. 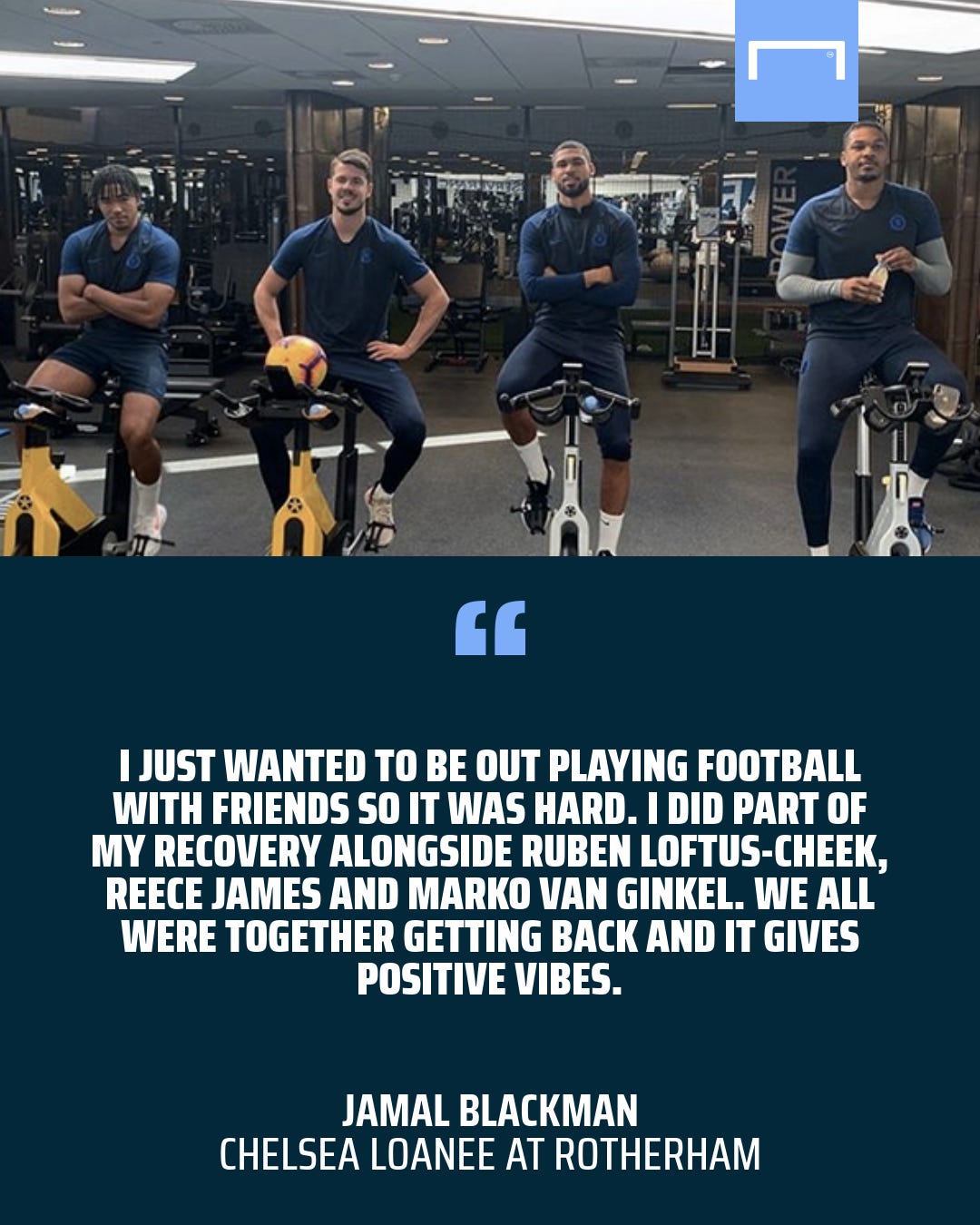 "It allowed me to trust my leg more," he says of his six-month stay in Arnhem. "The injury does play on your mind quite a bit. You really do have to believe in your leg again, to know that it is alright. You have to really push yourself to believe that it's fully healed; that you can take a tackle.

"Even now, I am still half robot! I have had the screws out but I still have the metal rod in there. I am going to see how this season goes and maybe revisit that in the summer.

"In my head, though, I think I am now fully past that stage of worrying about the leg and I want to show that I haven’t been affected in a negative way; that it was actually a positive in that it made me stronger.

"The fact that Bristol Rovers took me on loan in January certainly helped me a lot. There, I had a manager who trusted me, gave me games and told me to help myself get over the injury.

"So, I'd like to think I've taken a lot from everything I've been through in the last couple of years and built on it."

Now his focus is on enjoying another successful spell out on loan, this time at Championship outfit Rotherham United, whom he has joined for the 2020-21 campaign.

At 26, and in his 14th year on Chelsea's books, Blackman would be forgiven for feeling frustrated by the fact that he has yet to make a single senior appearance for the Blues.

However, he is immensely grateful to the club, not only for supporting him through the toughest period of his career, but also everything the staff have done since he first arrived at Cobham.

"There have been a lot of ups and downs but I have a lot to thank Chelsea for," he says. "I literally didn’t know anything about goalkeeping when I joined Chelsea, so I was lucky to be taught by such good coaches like Mark Beeney (former Leeds United goalkeeper and Chelsea goalkeeper coach) all through my young career.

"I had been a defender for my school team and was spotted in a five-a-side tournament. It was a very hot day, though, and I didn’t want to run about, so I went in goal. But we won the tournament and Chelsea asked me to come to training as a goalkeeper.

"Then, I ended up training alongside Petr Cech and Thibaut Courtois, working with great goalkeepers. We have Carlo Cudicini and Hilario so there’s a lot of expertise to have around you. I speak to all the guys. I have been fortunate to stay at the club and play games on loan.

"Rather than sit around and collect money, I have always been out playing. The loan system helps a lot of players in my situation go out and make a name for themselves. It will either give you a chance at another club or in the Chelsea first-team.

"I don’t see being here a long time as a negative, it is positive, I just want to play as much football as possible and the loan system is helping for now. I have seen players and managers come and go. It won’t be that way forever so I just look forward.

"I want to show that I can play in the Championship, and at an even higher level."

It will not be easy, of course. But Blackman no longer fears any challenge.