After years and years of attempting to prove himself, after trying over and over to figure out what he can truly be as a player, Gil has latched onto that basic emotion over the course of our interview. And why wouldn't he? The fruits of his labor are radiant.

Gil has become MLS' undisputed assist king, the best player on the league's best team, a midfield maestro who is dominating games like few players that have come before him. There have been incredible goalscorers in MLS, players like Zlatan Ibrahimovic and Carlos Vela and David Villa. But there haven't been too many playmakers who have controlled games in MLS quite like Gil, who has turned the league into his own personal playground in 2021.

Even with a month-long injury layoff, the New England Revolution star has Carlos Valderrama's season assist record in his sights. He's amassed 16 of them in just 21 games, and he would need 10 more in his last eight matches to level Valderrama. Difficult, but not impossible, especially not for a player in his form.

So Gil is a happy man, a player and a person who is genuinely, truly, loving every single bit of what could end up being a historic campaign in MLS.

"Football is not easy because you don't have always what you want." Gil tells Goal. "Everyone wants to play, to have good moments but sometimes it is very hard. Football is not always great for you.

"But right now I'm very happy here and I try to enjoy every moment because you never know in football."

"I think every player has his moment where he learns and really improves," he continues reflecting on the winding path that brought him from Spain to England to Massachusetts. "Some players, it's when they were 22-23 years old.

That change for Gil came as he arrived in New England. He joined the Revolution as a 26-year-old playmaker who was desperate to prove himself. After several stop-and-start years in Europe, Gil wanted to discover his potential, to play consistently and become the player that he always thought he could be.

So Gil is not just happy, but also willing to reflect on his path and how unlikely it all is. He didn't grow up expecting to become an MLS star. He always had different dreams, different ideas, a different plan. 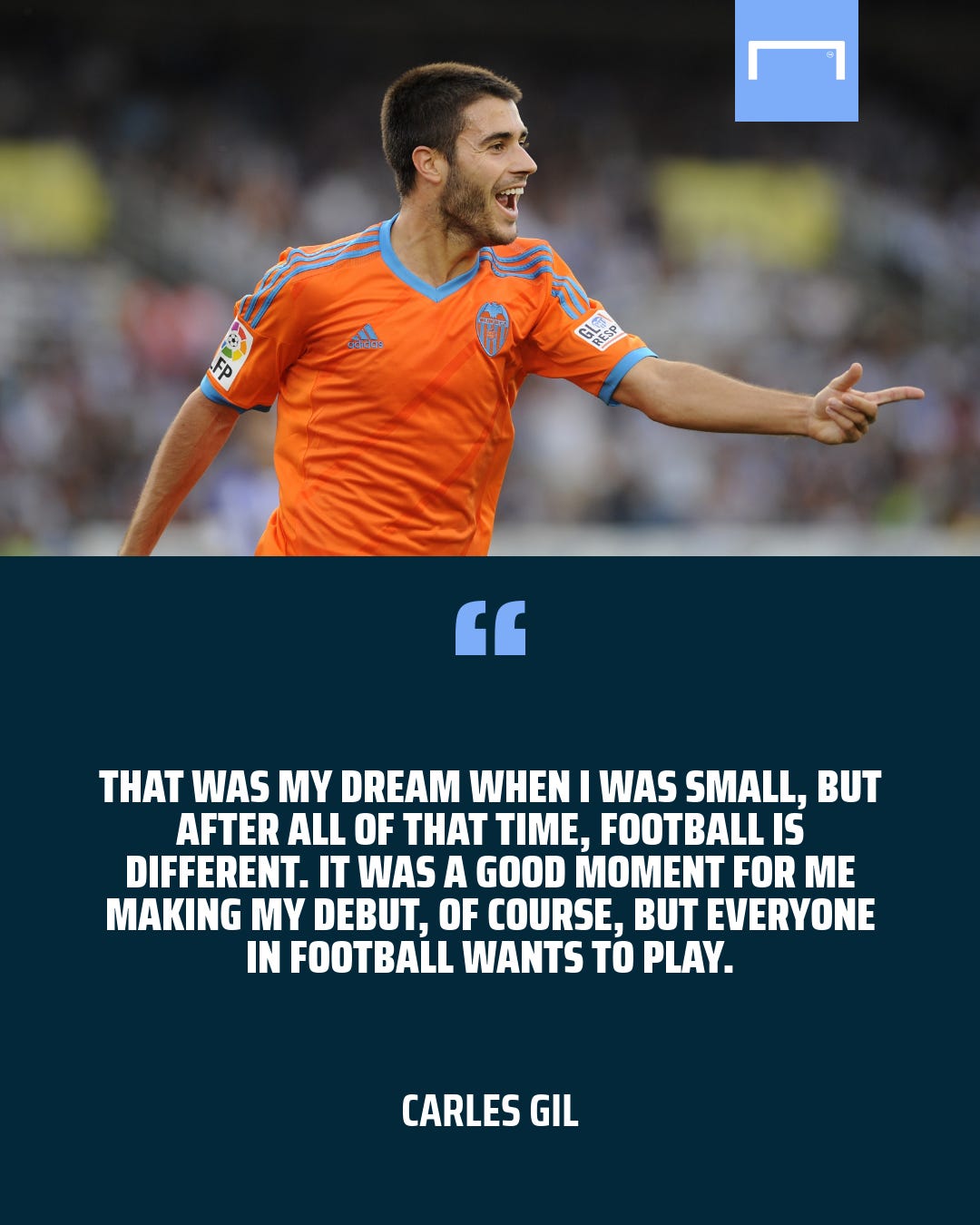 Born in Valencia, Gil's entire childhood built towards one goal: to play for his hometown team. For as long as he could remember, Gil imagined what it would be like to play for Valencia, to play at the Mestalla in front of his city like heroes David Villa, David Silva and Juan Mata.

And, eventually, he did. He rose through an academy along stars like Isco, Jordi Alba, Juan Bernat, Jose Gaya and Paco Alcacer, all players who went on to play at the highest levels of European soccer. From the age of six when he joined the academy, Gil dreamed graduating to the first team, which he managed for six months in 2014 after featuring on loan at Elche.

But stardom never came for Gil. At least not where he envisioned.

"David Silva was one of my references," he says. "I saw him not only in the first team but in the academy too. He is one of the better Spanish players in history I think.

"That was my dream when I was small, but after all of that time, football is different. It was a good moment for me making my debut, of course, but everyone in football wants to play. I was younger, we had top players in the team, so it was hard for me to get minutes. It was difficult to play, to help the team. Finally, after six months, I went to Aston Villa and I was excited."

He moved to Villa in 2014, shining during his early days with the club. But several changes in managers doomed Gil's time in England. Much like at Valencia, Gil was unable to truly assert himself and earn the trust of his coaches.

After a spell at Deportivo, Gil himself was at a crossroads. He was 26 years old and still fighting for his place in Spanish football's top flight. He was a player that was looking for a chance to consistently shine, to show that he could be a first-team player, a playmaker, maybe even a star.

And then came an offer from the New England Revolution.

At the time, Gil was open to something new, a chance to truly ignite his career. But, at that time, Gil was skeptical too. He knew little about MLS and what it would mean for his career. Despite the presence of players like Villa in MLS, it's still a league with a developing reputation in Spain, as evidenced by the growing presence of Spanish stars like Gil, Alejandro Pozuelo, Bojan Krkic, Alvaro Medran and Ilie Sanchez.

"I didn't know because it was very quick, a very quick decision," he says. "I wasn't happy in my club in Spain with Deportivo so I wanted to leave, and I have these offers. One of them was New England in MLS. At first, I didn't want to go because I didn't know MLS, the country, everything. But then, I accepted and finally I arrived here and it's an amazing experience for me.

"At the beginning, I saw something different that I thought, from being in Spain, this league is different. Every year the league is better, the players are better, a very good leagues and good stadiums, everything. I'm enjoying everything too much here and I'm just very happy."

Gil's happiness has spilled over onto the pitch - if you watch him play, it's clear to see that he's enjoying life in New England, and New England is certainly enjoying calling him their star playmaker. He's legitimately someone who can change games, and an individual who will most likely be named MLS MVP when the season comes to a close.

In his first stateside season, Gil scored 10 goals and added 14 assists, asserting himself as one of the best players in the league. And, after missing most of 2020 due to injury, Gil is back at it again as he's dazzled throughout the course of a dominant 2021 campaign.

With seven games remaining, Gil and the Revs have a stranglehold on the Eastern Conference. They have a 15-point lead over second-place Nashville SC in the East, and a 13-point lead over Sporting KC for the Supporters' Shield. The Revs have been dominant in a league that's historically very hard to dominate.

Much of the credit goes to Gil, who continues to provide assist after assist. He even chipped in a goal this week as well, scoring a stunning late winner against the Chicago Fire with just seconds left in the match.

Credit will also go to Gustavo Bou, to Tajon Buchanan, to Adam Buksa, to Matt Turner, all players that have shined for the Revs this season. But it's Gil that is the team's on-field leader, the player that makes a team loaded with talent play like a true MLS Cup contender.

And Gil's plan is to keep it that way in the years to come. This summer, at age 28, he signed a new contract that will keep him in New England through 2024. In doing so, he committed his prime years towards helping the Revs capture an MLS Cup, tying himself to a club that he feels has given him a home far away from Valencia. 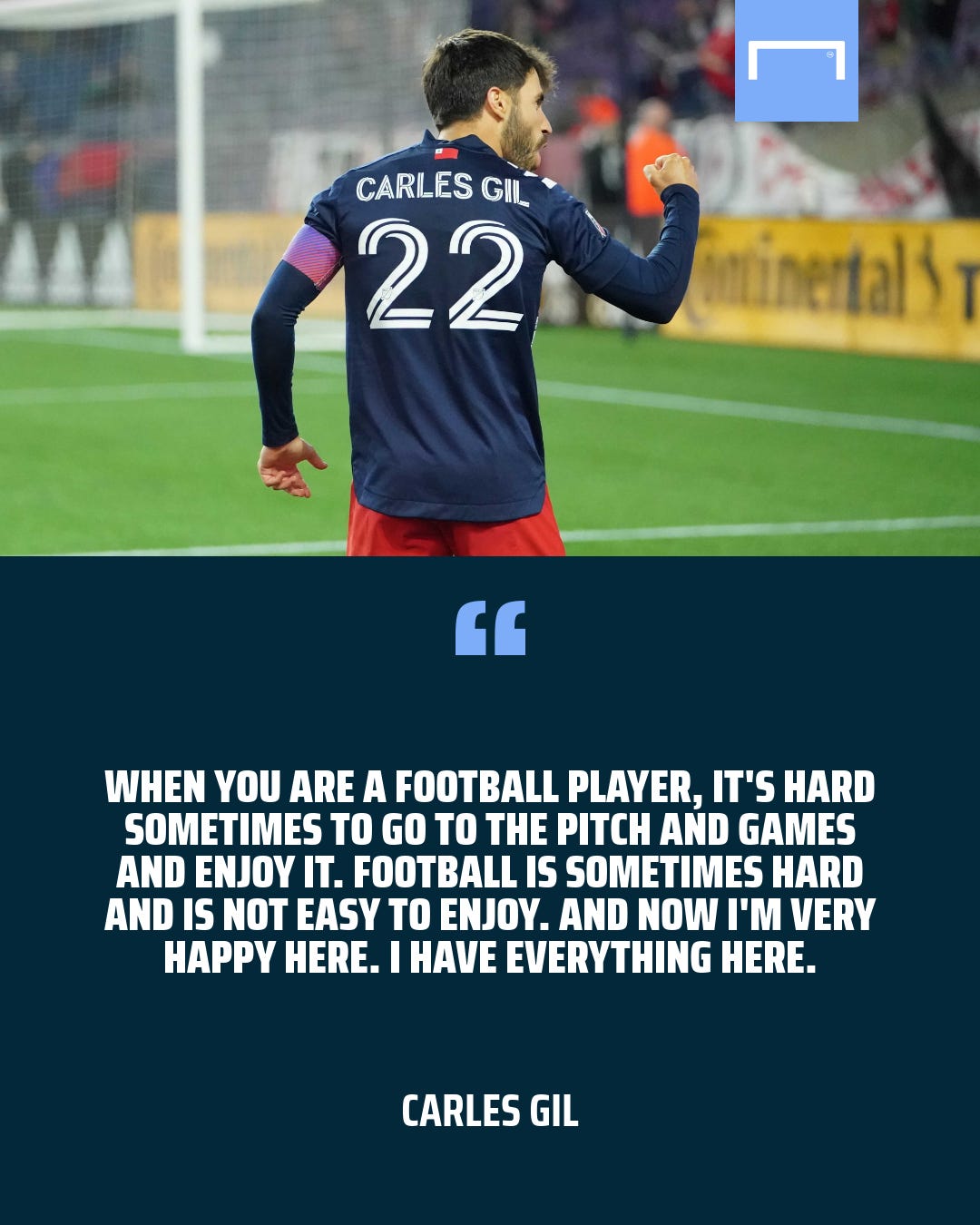 "I think, when you are a football player, it's hard sometimes to go to the pitch and games and enjoy it," he says. "Football is sometimes hard and is not easy to enjoy. And now I'm very happy here. I have everything here.

"I know from my career that there may be a moment where I don't feel that, but I don't right now with this club. I'm very happy here. It's a club that every year is improving, getting better with everything. I'm very happy here, and that is why I signed my new contract."

Gil has every reason to. He's unanimously seen as one of MLS' best playmakers and one of the league's biggest stars. His team seems to be on the verge of something special as it competes for a Supporters' Shield and, ultimately, an MLS Cup. And life in Boston, Gil says, is pretty damn good. The summers are nice, the city is lovely, and the local soccer team is doing better than ever.

The 28-year-old midfielder deserves credit for that last part and, after so many years of not quite fitting in, that must feel nice. MVP candidate, MLS star, maybe even record-breaker? Life isn't too bad for Carles Gil, a player whose unlikely road to MLS proved to be more life-changing than even he could have imagined.

"[Football is] all about moments," he says reflecting on his season so far. "Some moments, you feel like you can do everything right and another moment not so much. This year I feel that I'm very comfortable. I feel fit. I'm in a good moment. I feel very good."

"I don't care too much about the recognition," he adds. "I don't care because, for me, my teammates, my coach, everyone here in the group, I want them to be happy with me, with what I do for the club."

There's that word again: happy. For himself and for his team, it's all Gil could ever want.