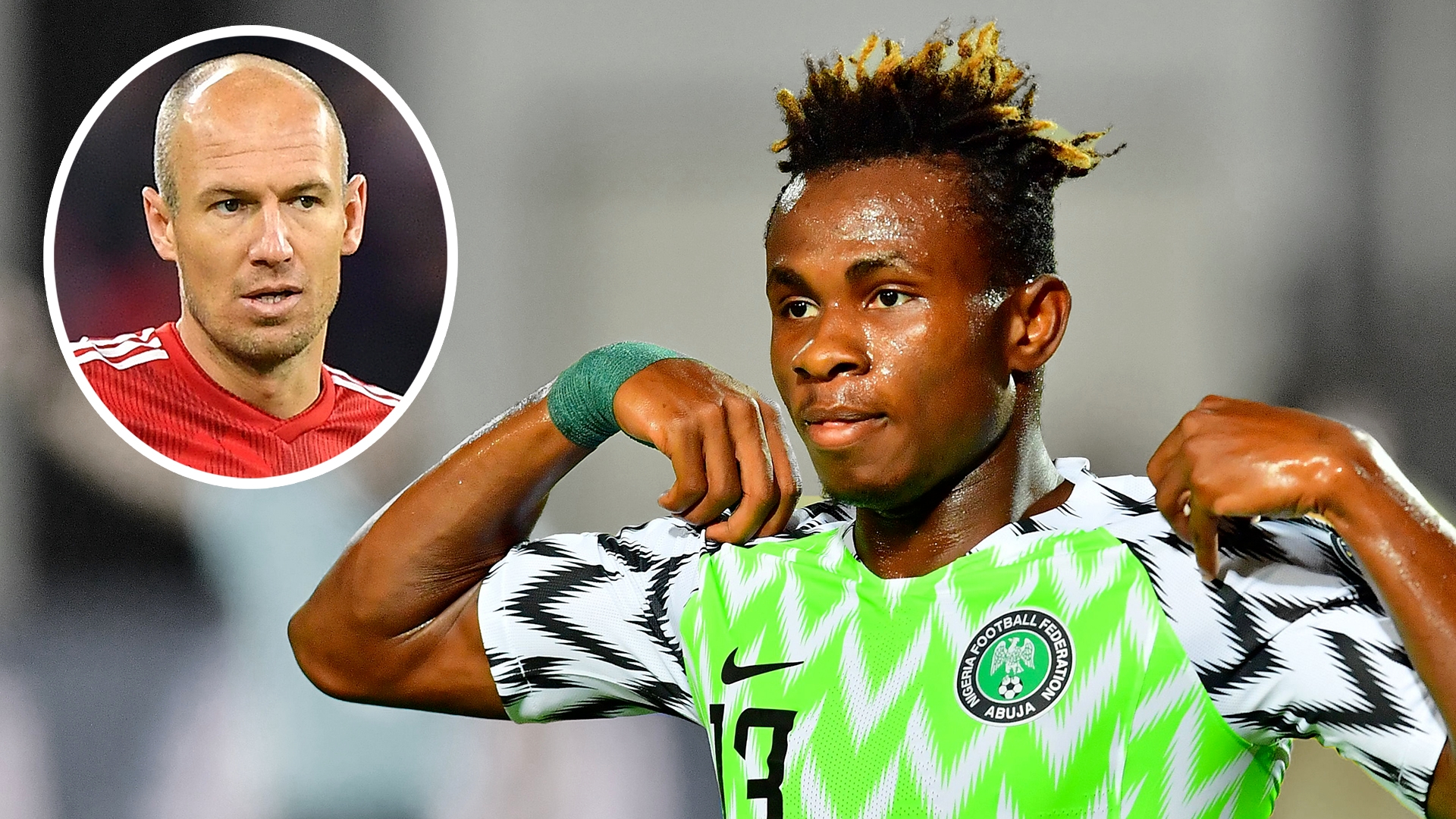 The Nigeria international talks exclusively to Goal about his Dutch idol, facing Lionel Messi and his incredible road to El Madrigal

If Samuel Chukwueze’s mother had her way, her son would never have been a professional footballer.

At 20, the Villarreal winger is one of Europe’s most exciting young talents, a player whose skills have put him firmly on the radar of the continent’s elite clubs. He’s one of La Liga’s best prospects, a current and future star of the Nigerian national team.

Chukwueze’s career is on the up, but it might well have been over before it began.

“My mum always tried to stop me from playing football,” Chukwueze tells  Goal  in an exclusive, wide-ranging interview. “I loved to play from a very young age but she would try to stop me. She would make me stay in the house and focus on my studies.”

Chukwueze’s grandfather had been a player at local level – a left-footer too, like his grandson – but when young Samuel was naturally drawn to the game, playing on rock-hard surfaces at his school in Umuahia, south east Nigeria, the resistance was strong.

“I was a good student,” Chukwueze says. “But when you love something and you are so passionate about it, it becomes your focus. Your studies start to fade. I was obsessed with playing football.

“Sometimes, I would go to training and would return home late, and I knew I was going to get punished. They’d say I would have to sleep outside. My mum would say I couldn’t come inside the house!

“My uncle told me ‘Samuel, you need to stop playing this game and focus on school’ but I didn’t listen. Then, one day they burned my boots! All my training gear, they burnt them so I couldn’t go.”

If that seems an extreme reaction, there would at least be a happy ending to it. A little while later, and completely out of the blue, Chukwueze’s big break would arrive.

“I stopped playing for a while,” he says. “But one morning one of my friends told me there was a screening happening, where they were picking players to go to a tournament in Portugal.

“I told them I wasn’t interested because I knew my family wouldn’t allow me to go. He said he would come to my house but I begged him not to. I told him not to disturb my sleep, but he came around 6 o’clock in the morning!

"She woke me up that morning, I was so surprised. She told me my friend was there to pick me up. I told her I wasn’t going and she was the one who said I should take my boots and leave the house! I was so surprised!

“The person who pushed me away from football was the one who pushed me to that screening. She said God had told her ‘You must allow this boy to play.’ I’m so glad for that.”

The ‘screening’, as Chukwueze calls it, was for the Diamond Football Academy, the biggest in Umuahia. And it didn’t go entirely to plan at first.

“The coach told me I was too late,” he remembers. “They had enough players.

“I was outside waiting for my friend so we could go home, but the manager of the Academy told the coach to allow me to train so they could see what I could do.

“I trained, just for a few minutes so the coach could watch, and I did enough to impress him. That was where my career started.

"I became the top scorer of the Academy, I went to Portugal and won the highest goalscorer award at that tournament, and things went from there.”

Chukwueze’s rise was rapid. In 2015, he was a key player in the team which won the FIFA U17 World Cup in Chile, shining in a tournament which also featured the likes of Christian Pulisic, Eder Militao and Trent Alexander-Arnold.

“I was just playing for fun, just enjoying myself,” he says. “I never knew it could take me anywhere.”

Two years later, he was ready to move to Europe. A host of clubs were keen. Chukwueze visited the likes of Porto, Sporting, PSG and Salzburg, while Arsenal got close too.

Villarreal, though, were the preferred choice and so Chukwueze, 18 years old, was off to Spain.

The adaptation, naturally, was tough. Chukwueze chose not to live at Villarreal’s Academy, as many young players do, instead moving into an apartment with a team-mate.

“I wanted independence,” he says. “I wanted to learn to cook for myself, to look after myself. I came alone and I knew I had to grow up fast.”

He remembers struggling initially with the Spanish language and, especially, in terms of food.

“I didn’t even know what they were giving me at first, but I didn’t like it!” he laughs. "The meat…there was blood everywhere!

“But I am adapting, I have learned to love it. I love Spain. My Spanish is improving, I can understand it better than I can speak it.”

In Villarreal’s Cantera, he struck up an immediate friendship with Pau Torres, a towering centre-back who has since followed him into the first-team. Torres would drive him to training, act as his minder on the pitch and help him with language and cultural problems.

Chukwueze’s coaches, meanwhile, were struck by what they saw. The teenager’s pace was electric, his dribbling left defenders terrified, and he had end product too. Cutting in from the right wing onto his left foot, he reminded staff of Arjen Robben – which is a source of huge pride, it emerges.

“He’s the king, to me,” says Chukwueze when asked about the great Dutchman. “He’s the perfect player. I watch so many YouTube clips of him, and there are so many things I can learn from watching him.

“On the way to games, even now, I will still stick on clips of Robben and watch his goals, his dribbling. He’s my inspiration, one of the greatest.

“I like to be me, and of course you have to be yourself, but you need to learn from people like him. What a player!”

Chukwueze’s senior debut for Villarreal came in September 2018, a 2-2 draw against Steven Gerrard’s Rangers in a Europa League group match at El Madrigal. “A dream come true,” he says.

He has been a fixture in the side since. His first goal came against Almeria in the Copa del Rey, and by the end of the season he had netted eight times in 37 appearances.

One of those goals came against the mighty Barcelona, in a madcap 4-4 draw in which he terrorised Jordi Alba from start to finish. Villarreal led 4-2 in stoppage time, only for Lionel Messi, of course, to drag Barca to a point.

“That was my best moment in the first team,” Chukwueze says. “But I still wasn’t happy after the game because we didn’t win.

“I’m not a good loser. I couldn’t sleep that night, but sometimes Messi just does what Messi does. I don’t think he was in the same stadium as the rest of us that night!”

This season, remarkably, started with another 4-4 draw at El Madrigal, Chukwueze scoring against Granada. On Sunday, Javier Calleja’s side drew 2-2 against Real Madrid – another game they could and should have won.

Consistency is an issue. Villarreal finished 14th in La Liga last season, flirting with relegation at one point. After three games, they are 16th and without a win. Chukwueze, though, says they should be setting their goals high this term.

“We can aim for the Champions League places, I think,” he says. “The team is ready, we just need to show our best levels consistently.”

And what of the long-term, what of his own future? The scouts are already circulating – Liverpool are among those who have been alerted by his progress over the last 12 months – and the expectation is that he will move on sooner rather than later.

He loves Juventus, and in particular Douglas Costa - "when I play FIFA on the PlayStation, if I don't play as Villarreal, I play as Juve," he laughs – but he's in no hurry to hawk himself around Europe just yet. A partnership between Roc Nation Sports and 10 Management, his representatives, was confirmed recently, and is evidence of his growing reputation and stature.

“I know I am going in the right direction,” he says. “I am happy just to be playing football and to see where that takes me. I always try to see the bigger picture, and to stay patient. I am not one who wants everything immediately. I am happy to take smaller steps on the way to the bigger goals.

“I just love to play. I love training. From the moment I wake up, I want to be kicking a ball. It is a joy for me.”

One thing’s for sure; his mum will never regret that change of heart.