How many hours and how much money do you have to put into FUT to get the highest-rated players in the game?

FIFA Ultimate Team allows you to build the teams of your dreams, combining the likes of Lionel Messi, Cristiano Ronaldo and even Pele in the same starting XI.

However, for many people, these sort of teams will remain a dream as these players cost a lot of in-game currency to purchase.

There are a few ways to make coins in FIFA 21, including playing matches, trading on the transfer market and spending real money to buy packs, but how much does the best team in the game actually cost?

How much does the best team cost in Ultimate Team?

The best team in FIFA Ultimate Team costs around 100 million coins to purchase.

Obviously, depending on your playing style, which players you include in your dream team will vary, but most people will choose the game's highest-rated players, including Icon Pele and Icon Diego Maradona.

Both of these players cost over 7 million coins in the game, but some others such as Ronaldo and Paolo Maldini cost over 10 million coins each across the PlayStation, Xbox and PC markets.

Team of the Year players are more affordable, with both Cristiano Ronaldo and Kylian Mbappe costing less than 8 million coins.

However, even if you lower your budget, a team filled with players rated 94 or higher will still set you back a pretty penny. 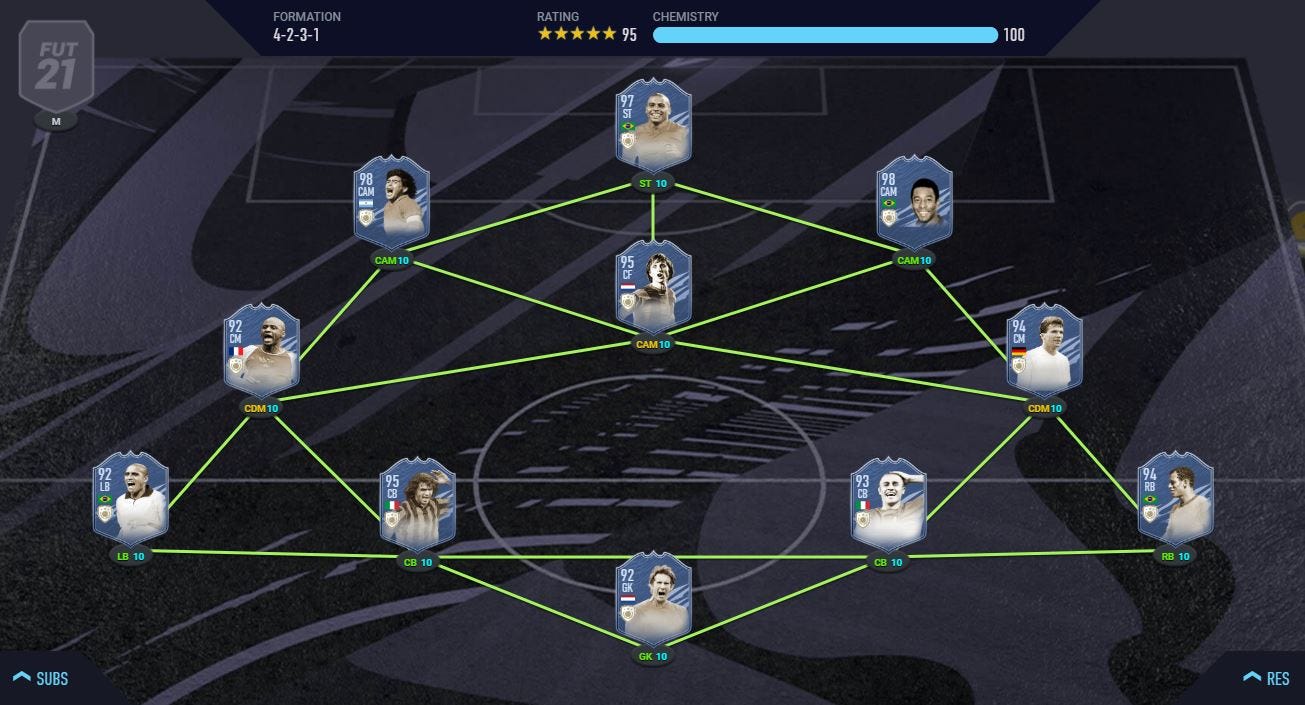 How many FUT games do you need to play to earn 100m coins?

As you would imagine, 100m coins is a lot of coins!

Playing matches in FIFA 21 is not a great way to earn coins, unless you are unbeatable and can finish with 30 or more wins every weekend in FUT Champions.

Most people win as many games as they lose, so taking this into account, the average number of coins earned from each game is around 1,500 coins.

That estimate includes weekly rewards from Squad Battles and Division Rivals, as well as Weekend League and the sales from players earned through reward packs.

Liverpool forward Diogo Jota is currently ranked No. 1 in the world on #FIFA21 FUT Champions after winning 30 matches in a row 🎮 pic.twitter.com/zi9OVWBu8l

At 1,500 coins per game, you would need to play 66,667 games. Each game takes around 20 minutes when including load times, celebrations, replays and so on.

How long would it take to earn 100m coins through trading?

Trading is one of the best ways to make coins in FIFA 21, but it also requires you to put a lot of hours into buying and selling players or items on the transfer market.

Many successful FIFA traders can make tens of thousands of coins every day and this process can earn you millions if you make the right investments.

Even still, if you are an excellent trader and make 50,000 coins every hour from flipping cards and monitoring the market, it will still take 2,000 hours to earn 100m coins.

If you trade for 10 hours a day at this sort of profit, it will take 200 days to be able to afford the ultimate Ultimate Team.

How much real money would you need to spend to get 100m coins on FIFA?

Many people spend their own hard-earned cash to purchase FIFA Points on the store and open packs.

This will allow you to buy 80 Premium Gold Packs, but it is usually worth waiting for Promo Packs to be released in the store before spending FIFA Points.

The contents of each pack is random, but you will be able to quick sell a complete Premium Gold Pack for at least 1300 coins.

On average, these packs will give you 2,500 coins worth of content. By that calculation, 80 Premium Gold Packs will net you 200,000 coins.