In 2005, shortly after the Glazer family completed their purchase of Manchester United, around 300 supporters attended a march to protest the club's new owners.

Those protests, for a time, continued, with supporters showing their displeasure with signs and the wearing of the club's original green and gold colours on matchdays.

Sixteen years on, though, and those protests have largely been forgotten, at least outside of United circles.

On Sunday, though, the 2000 or so fans who turned up at Old Trafford insured their voices would be heard, with the scenes that followed ensuring few will forget the events of May 2, and the postponement of United's clash with old rivals Liverpool.

A fortnight on from the announcement of the ill-fated Super League, supporters arrived in their droves at the Theatre of Dreams, keen to let the Glazers know just what they thought of the part they played in proposing the breakway competition.

'"Apology not accepted," read a number of banners, referencing Joel Glazer's open letter to fans following United's decision to pull themselves out of the new tournament.

"We want Glazers out," filled the air, the Super League having reignited a 16-year-old feud that some of those here on Sunday would not have been alive for when it first began. The message was loud, and it was clear.

“It’s a warning to the owners of the football club that ultimately they (the fans) are not going to accept what they have done in the last couple of weeks,” Gary Neville said on Sky Sports having seen the hallowed turf on which he enjoyed so much success invaded by the protesting masses.

Whether that warning will be heeded remains to be seen, but surely the Glazers cannot ignore the events of this fateful afternoon. 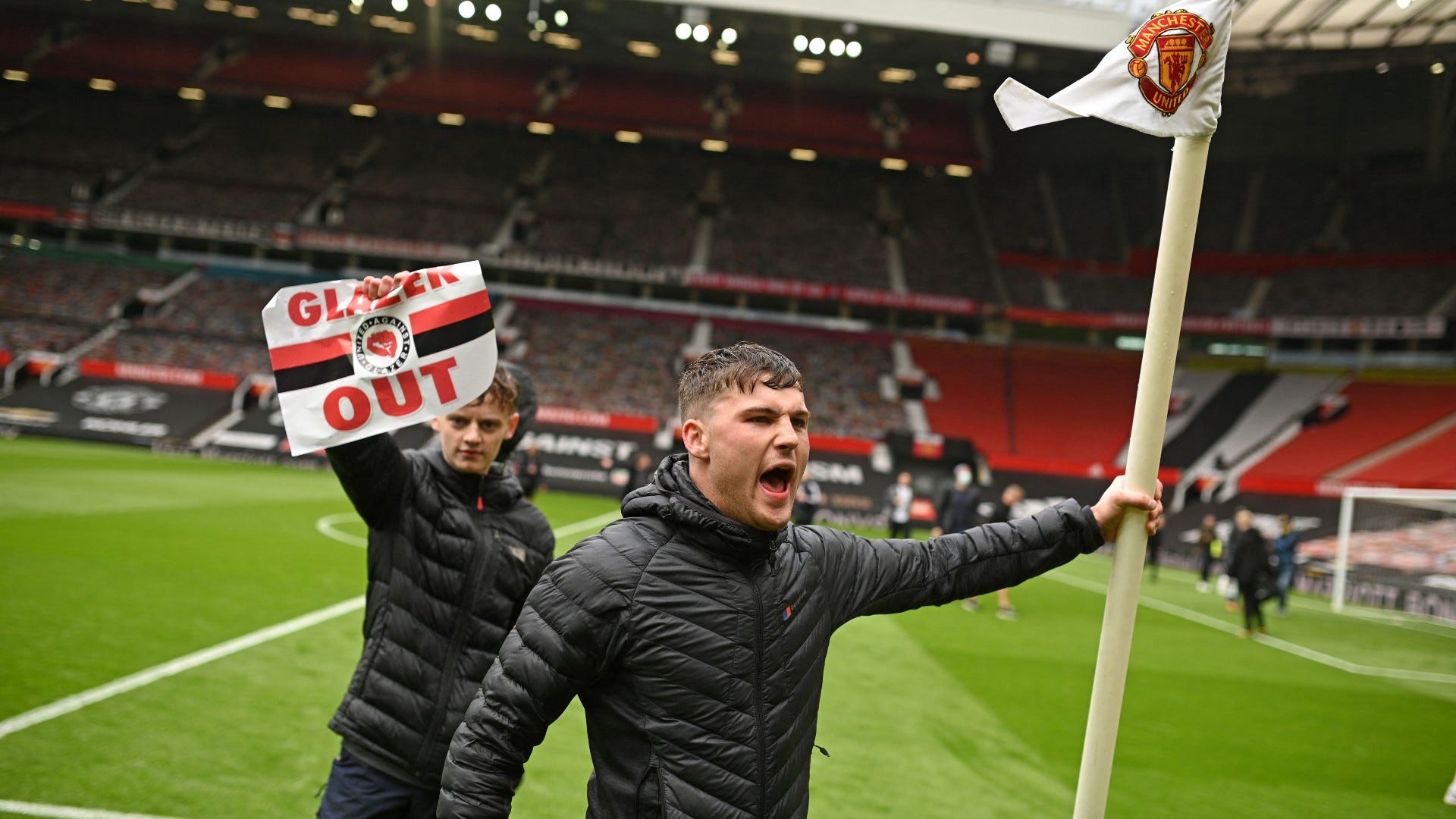 Those taking part had been keen to stress beforehand that the planned protest would be peaceful, and on the whole it was.

Parents arrived with their children to demand change, rather than act in a volatile manner towards the club they love.

At 2pm BST - around two-and-a-half hours before kick-off against Jurgen Klopp's side - things changed.

Two bangs from fireworks could be heard on the Old Trafford forecourt, which it is understood was a signal for fans to begin moving towards the stadium.

A 1000-person strong crowd were able to breach the barriers protecting the entrances and head inside, forcing staff members to lock themselves in rooms for protection as the old stadium was put into lockdown.

As supporters stormed the pitch, there was no doubting what they truly wanted: a change of hands at the very top of their football club.

While the majority limited their protests to chanting and parading banners, one group could be seen playing with the match ball while others paraded corner flags around the ground. A flare was thrown in the direction of the Sky Sports television stage, but trouble was limited to a minority before they were eventually ushered back outside.

The protests were not just limited to the ground, however. 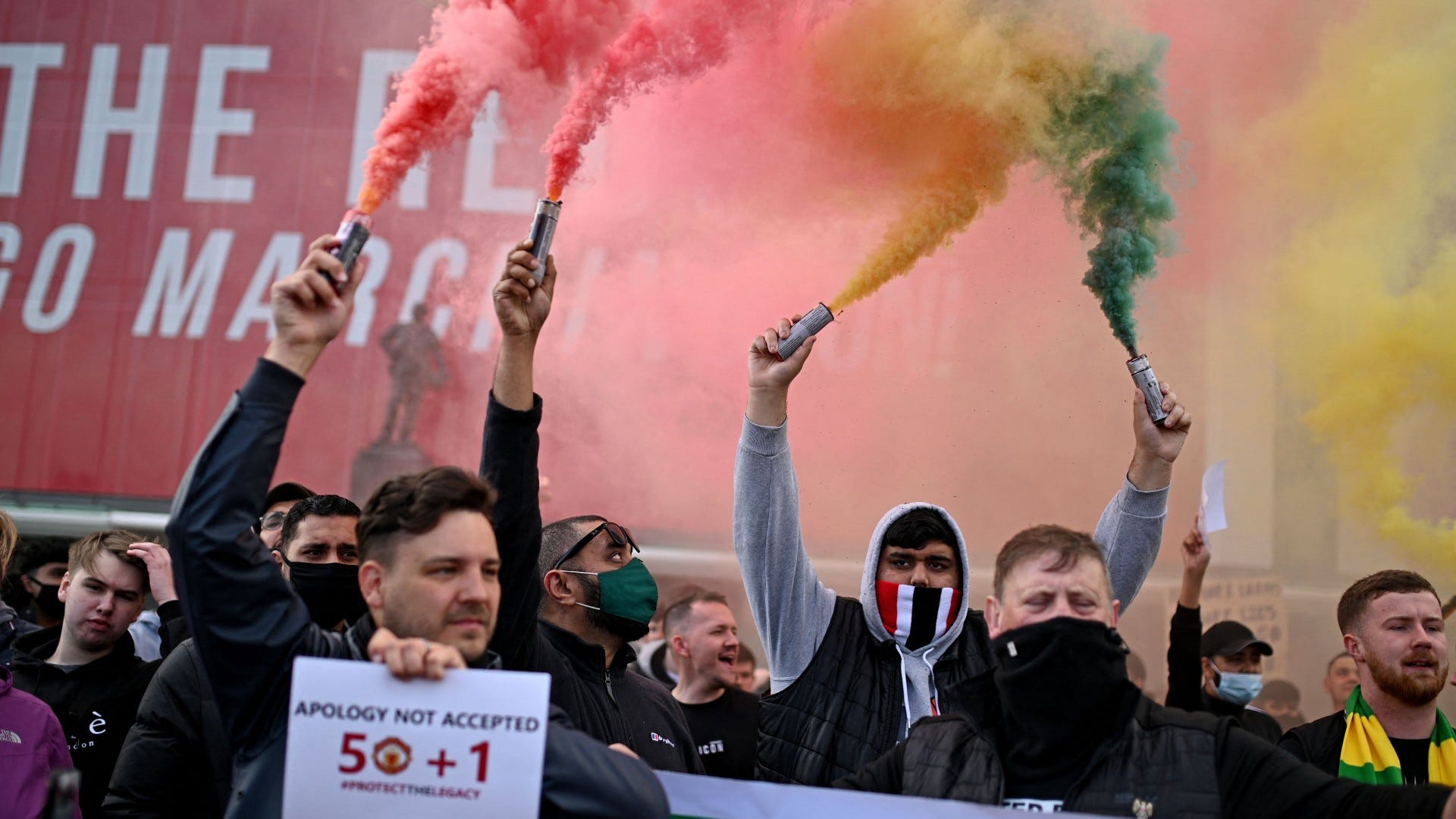 In Manchester city centre, members of the United squad could be seen peering from their room windows inside the Lowry Hotel as fans began to gather outside the team's usual pre-match base.

"We'll decide when you will play," was the chant being sung as the coaches slated to carry Ole Gunnar Solskjaer and his players to the game were barricaded in by supporters.

Fans are keen to remind the game's power brokers that they remain the loudest and, at times, most powerful voice. Money continues to talk, but the power of protest can be just as strong.

Across town, Liverpool's players and coaches were instructed to do their own thing at their own hotel as the drama played out elsewhere. A number chose to watch the television coverage, while others retreated to their rooms in a bid to prepare for a game they still believed would take place.

An hour before kick-off, that was seemingly a sentiment that was shared by most.

Despite concerns over whether Covid-19 regulations had been breached, with it Goal understanding some of the fans were able to gain access to the United dressing room, team line-ups were announced and journalists received Zoom links for the post-match virtual press conferences.

While that was as close to business as usual as the afternoon got, overhead police helicopters could be heard and referee Michael Oliver was forced to circle the stadium to ensure the stands were fully clear of protestors.

Security guards at the club had been prepared for an afternoon of dealing with crowds for the first time in over a year, but - perhaps naively - had not expected things to escalate as they did. 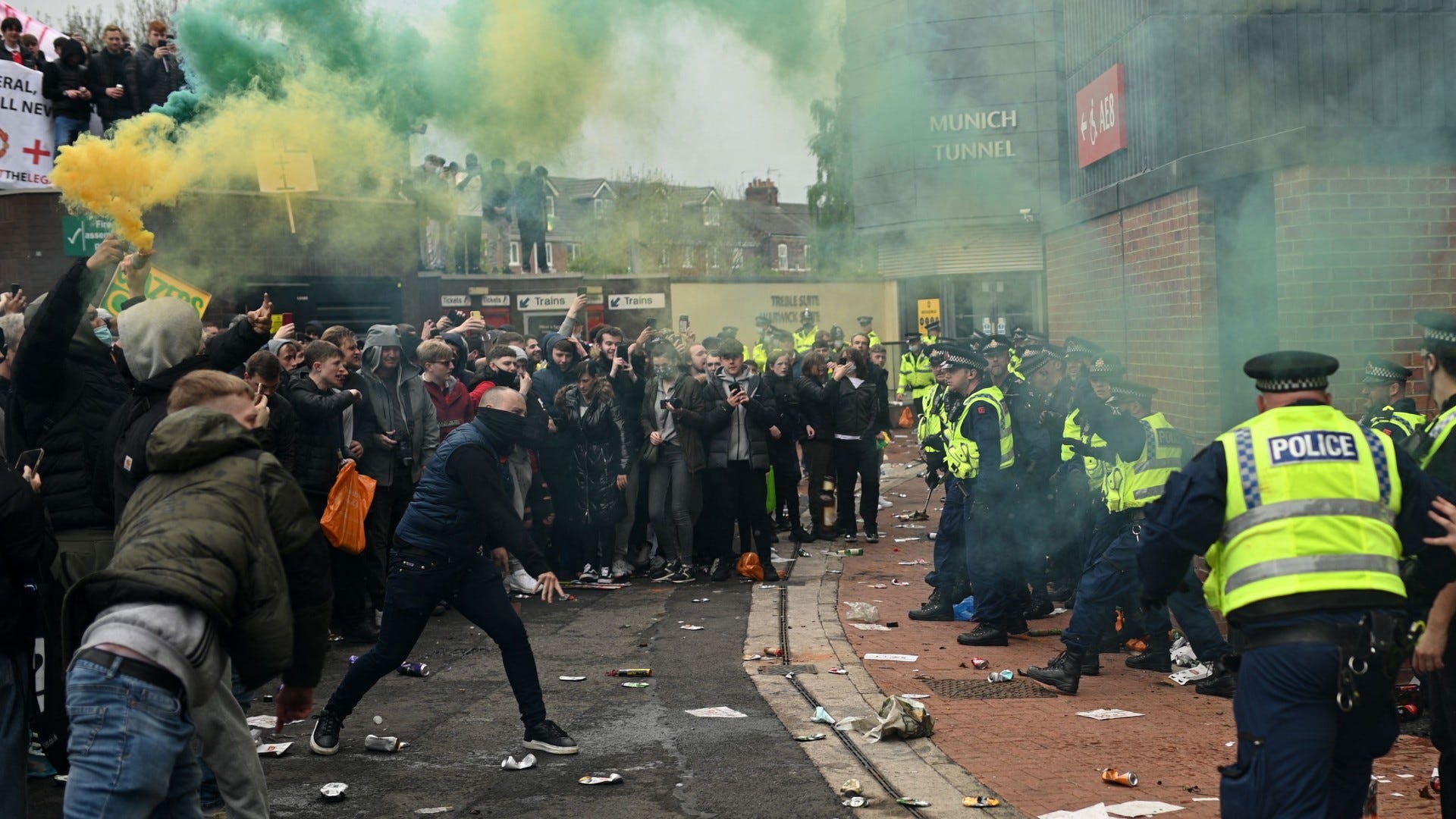 Following the clearing of the stadium, a small number of fans could be seen clashing with police around the entrance to the Munich Tunnel, with those involved set to face punishment from Greater Manchester Police.

The majority, though, acted peacefully, and it is perhaps their actions that will have the most far-reaching consequences.

“Our fans are passionate about Manchester United, and we completely acknowledge the right to free expression and peaceful protest," a statement from the club read following the decision to postpone the fixture at 5:35pm, just over an hour after the original kick-off time.

"However, we regret the disruption to the team and actions which put other fans, staff, and the police in danger."

Those at the Lowry celebrated loudly upon the announcement to call the game off, their victory for fan power and protest set to make headlines around the world.

Their fight, though, is not over.

“It's not going to go away," Neville warned the Glazers. "I don't think they (the fans) trust the owners of this club, they don't like them, they think they should leave.

"Beyond today, it should be about reform and regulation and making sure they can't do it (form a breakaway competition) again. Protesting is the right of every single person in this country, and we must retain that,.

“However, beyond today it's a case of making sure that across the country the fans unite to make sure there's reform in English football.

"If anything, today has got to be a precursor to that, or else today will be a waste of time."

This should have been a day when tensions between supporters of Manchester United and Liverpool were at their highest, and yet the opposing fanbases find themselves banding together behind a common cause.

Given the history of the rivalry, that maybe should be most concerning of all to those who own the world's biggest clubs.

This, too, is just the beginning. The Glazers and others are set for an uncomfortable end to the season and beyond.