"We are going to have our first World Cup with VAR," FIFA president Gianni Infantino declared in March . "It has been approved and we are extremely happy with that decision."

Sergio Ramos will have been less enthused by the news, as the use of Video Assistant Referees in Russia this summer – and hopefully beyond – will make it far more difficult for the Spain international to continue with the thuggery that has characterised his career.

Whatever one thinks about the fall which ended Mohamed Salah's participation in last month's Champions League final , the mere fact that Ramos was involved was enough to cast doubt over whether the tangle of arms was intentional.

As well as having taken Dani Alves down in eerily similar fashion in Cardiff the previous year, the Spain international also showed a total disregard for the welfare of his opponent by unnecessarily barging Alvaro Vadillo off the pitch as the ball run out of play in a Liga clash at the Santiago Bernabeu in 2011, resulting in a fall that left the Betis youngster with cruciate ligament damage.

In short, even Ramos apologists would concede that the Real Madrid captain has plenty of previous. Of course, while the 32-year-old has long history of violence, he always possess sufficient audacity to cast himself as the victim. Kiev was no different.

Admittedly, the reaction to the Salah clash was hyperbolic , given the lack of conclusive evidence of intent, and there is no way to prove that he was responsible for Loris Karius' alleged concussion either, but the defender clearly elbowed the Liverpool goalkeeper in the face early in the second half.

For different reasons, both Reds left the field in tears , but Ramos, true to form, laughed off his alleged involvement in his opponents’ anguish.

"Damn, they've given this a lot of attention, the Salah thing," he exclaimed afterwards. "I didn't want to speak because everything is magnified.

"I can see the play clearly: he grabs my arm first and I fell to the other side. The injury happened to the other arm but they said that I gave him a judo hold!

"After the goalkeeper [Karius] said that I dazed him with a clash, I am only missing [Roberto] Firmino saying that he got a cold because a drop of my sweat landed on him!"

In fairness, that would have been a humorous retort had it not been so wearily familiar, given that Ramos is a repeat offender who has spent well over a decade adding insult to injury. 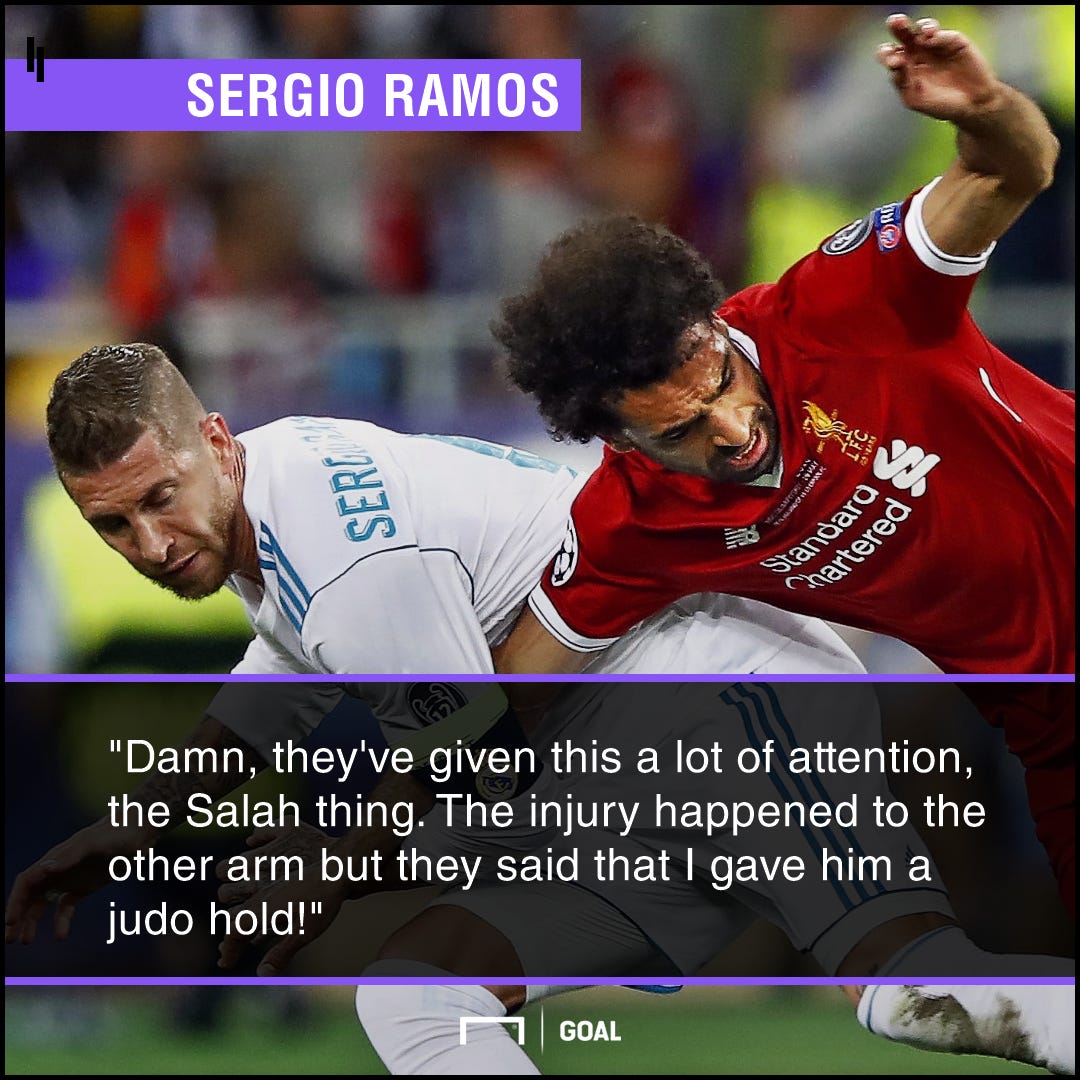 After he had been dismissed for viciously hacking down Lionel Messi in the dying seconds of Madrid's 5-0 loss at Barcelona in 2010, he claimed, with a straight face, that he had not tried to hurt the Argentine.

"I made a mistake, but I did not go in with the intention of causing damage," he insisted. Presumably, Ramos’ motives were just as pure on the 23 other occasions on which he has been sent off while representing Real.

The truly remarkable thing about his record haul of reds should actually be higher. For example, he only received a yellow for the horrific, two-footed lunge that put Levante’s Nacho Rodriguez out of action for six months with ligament damage in 2010.

And that’s without getting into all of the off-the-ball incidents that have gone unnoticed – and, thus, unpunished – during his career, such as the cowardly punch he threw at former Atletico attacker Mario Mandzukic during a Madrid derby in 2014.

The fact of the matter is that Ramos is and always has been a liability. He is not someone that can excel by operating exclusively within the rules of the game. He relies heavily on foul play to stop his opponents.

Contrast this approach with the likes of Gaetano Scirea – who was never sent off – Paolo Maldini, Fabio Cannavaro, Javier Zanetti or Philipp Lahm: model professionals who outwitted opponents with guile and grace. 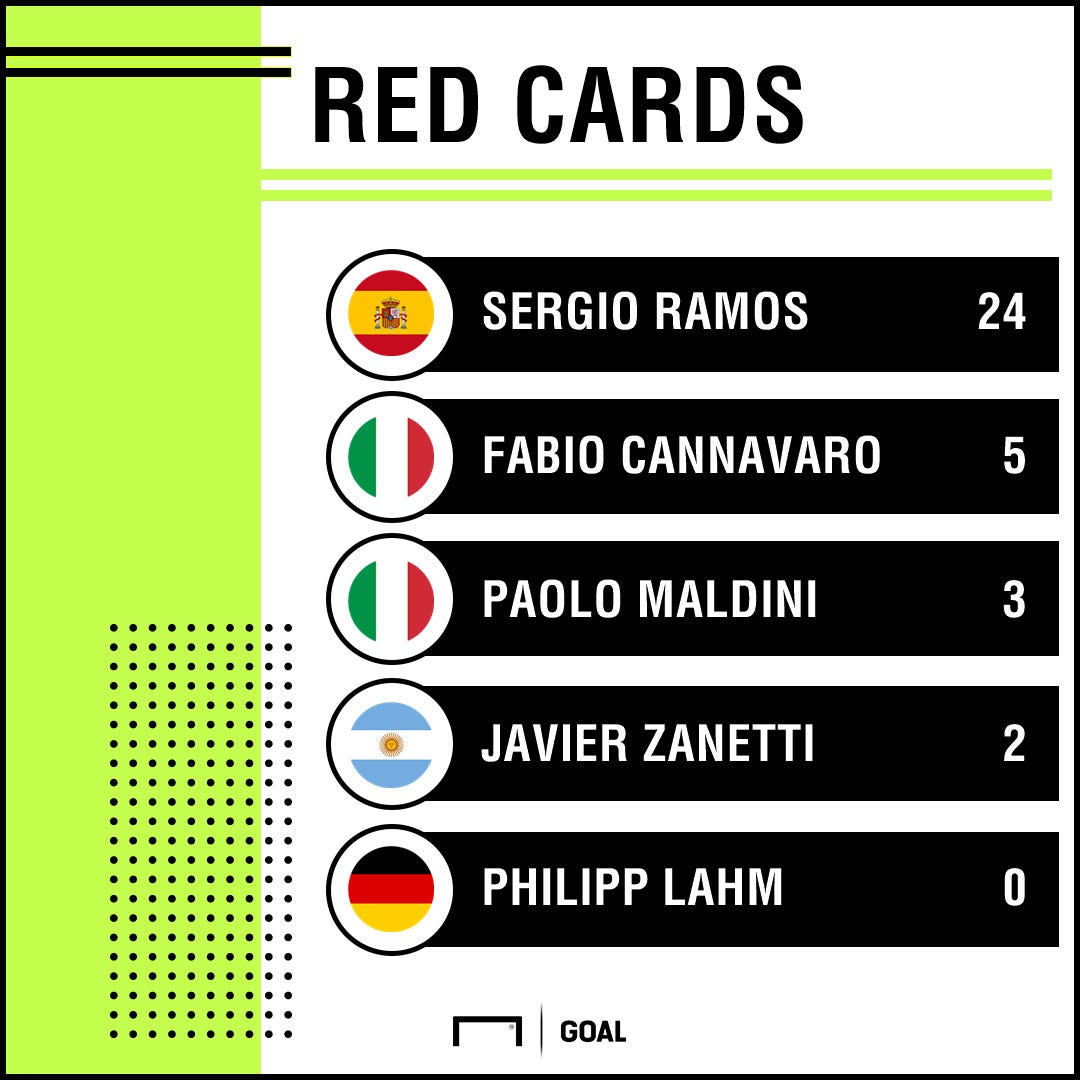 When faced with real talent – Ronaldinho or Messi – Ramos almost inevitably resorts to violence. Alongside another hatchet man, Pepe – whom he will face when Spain tackle Portugal in their World Cup opener in Sochi on Friday –  Real's deadly defensive duo spent years taking it in turns to kick lumps out of rival defenders.

When such crude tactics haven't worked, the most ill-disciplined player in Liga history has seen his deficiencies brutally exposed – see his horror show against Ronaldinho at Camp Nou in 2005, or almost any game against Messi. Of course, Ramos' willingness to take the fight to the opposition, along with his crucial interventions in major matches for Real, have rightly earned him a reputation as a great leader. But aggression and goals do not make a defender truly great.

In truth, he is blessed to have proven himself as a robust and prolific centre-half in a golden era for Spanish football (no defender had more shots on goal across Europe's big five leagues last season).

Take a long look at the stats for 2017-18 and you’ll see that while he rarely makes costly errors – just one led to a shot on his own goal – and is a good distributor of the ball, he is by no means defensively exceptional in relation to his peers. Indeed, there is one truly outstanding defender in the Real backline and it is not Ramos but Marcelo, who made more clearances and won more headers than his skipper last term. 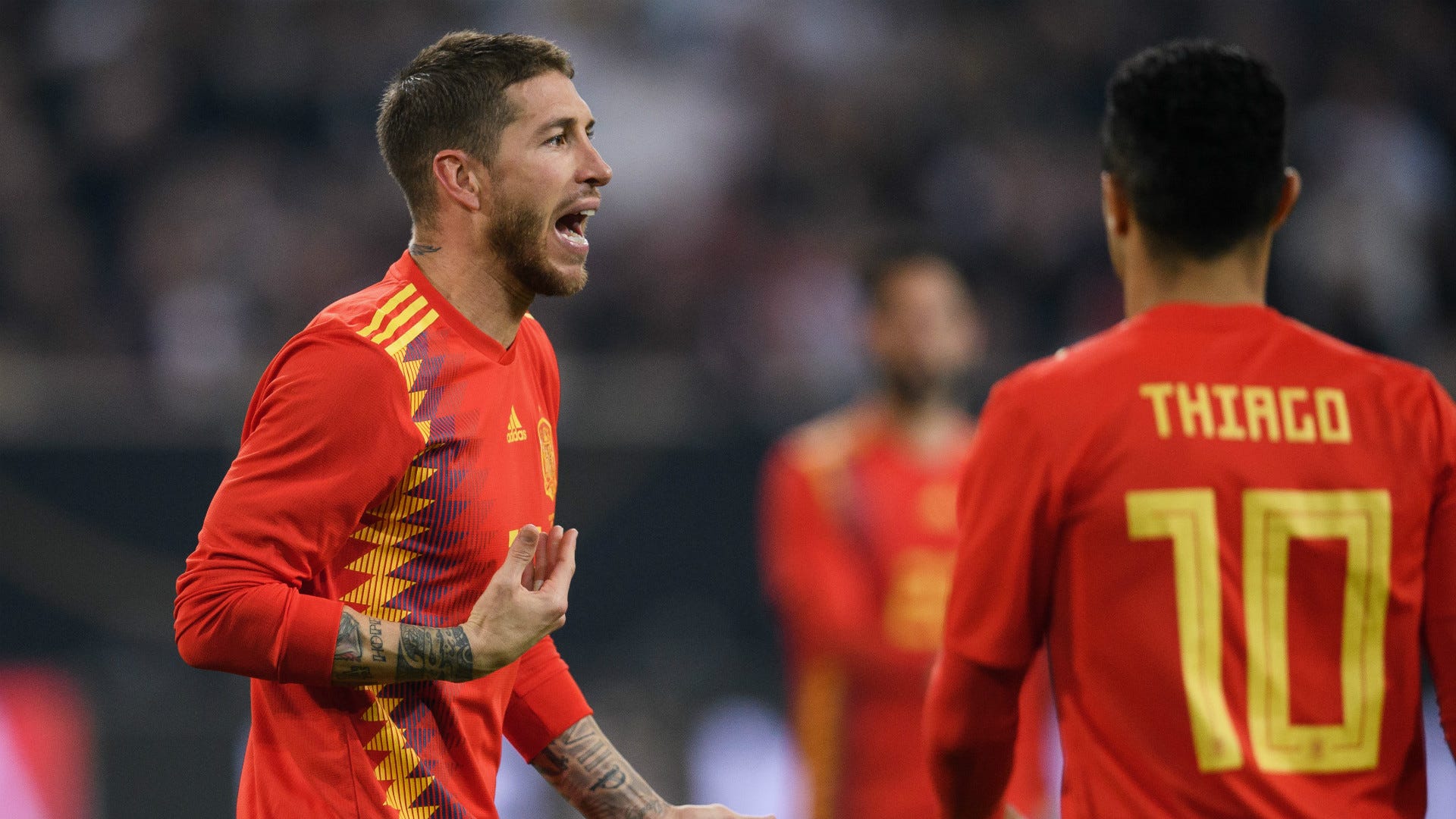 Interestingly, whereas one would understandably assume that Ramos would flourish when it comes to doing the ugly side of defending, he won only 47 tackles in 44 games in all competitions in 2017-18. Tellingly, he gave away 59 fouls – the second-highest tally for a centre-half in Europe’s Big Five leagues – meaning Ramos is more likely to take his opponent rather than the ball.

In short, he is one of the most prolific and ruthless centre-halves the game has ever seen but should not be remembered as a great exponent of the art of defending. Of course, he will not care. He has nothing but contempt for sportsmanship. As far as he is concerned, winning is all that matters and the ends justifies the means.

But, worryingly for him, maybe such an abhorrent attitude will no longer prove so successful. VAR may be far from flawless but it should at least shine an unfavourable light on the idiscretions of Ramos and his fellow masters of the 'dark arts of defending'.

The less room in which they have to hide in the future, the better for everyone involved.