The current Shenhua flop has a long history of upsetting his employers, and his new coach will not stand for it as he slammed Carlitos' fitness

The party is over for Carlos Tevez. For months the former Boca Juniors, Juventus and Manchester City striker had been treated with kid gloves by Gustavo Poyet at Shanghai Shenhua. Astonishing shows of indiscipline and apparent indifference for his Chinese employers passed without comment from his Uruguayan coach, even as awful results continued to push him further towards the exit.

Finally the situation could go on no longer. Poyet was dumped by Shenhua, who turned locally for a replacement. Wu Jingui has stepped into the breach with his club languishing in 11th in the Superleague, with almost no contribution from Tevez. The 33-year-old striker has played just 11 times for Shanghai, scoring a measly two goals as his team has entered free-fall.

Almost as soon as he came in Jingui made it clear that there would be no free-riding for Tevez, who has treated this year in China as little more than the highest-paid sabbatical in football history.

“He will be informed of my tactical plans but I won’t pick him right now. He's not ready physically. He's not fit to play,” Wu said of the Argentine, who is almost a given according to reports to leave Shenhua in December and return to Boca Juniors.

“He is overweight, along with [Fredy] Guarin. I have to take responsibility for the team and the players as well. If you are unable do your utmost to play, there's no point in picking you.

“I have coached lots of big stars, and my players are never picked on reputation.”

Perhaps now, then, we can also dispense with Tevez's purported reputation. For years feted as the 'Player of the People' in his native Argentina, it now seems clear that the only people Carlitos can claim to represent are those lucky enough to be in his inner circle. 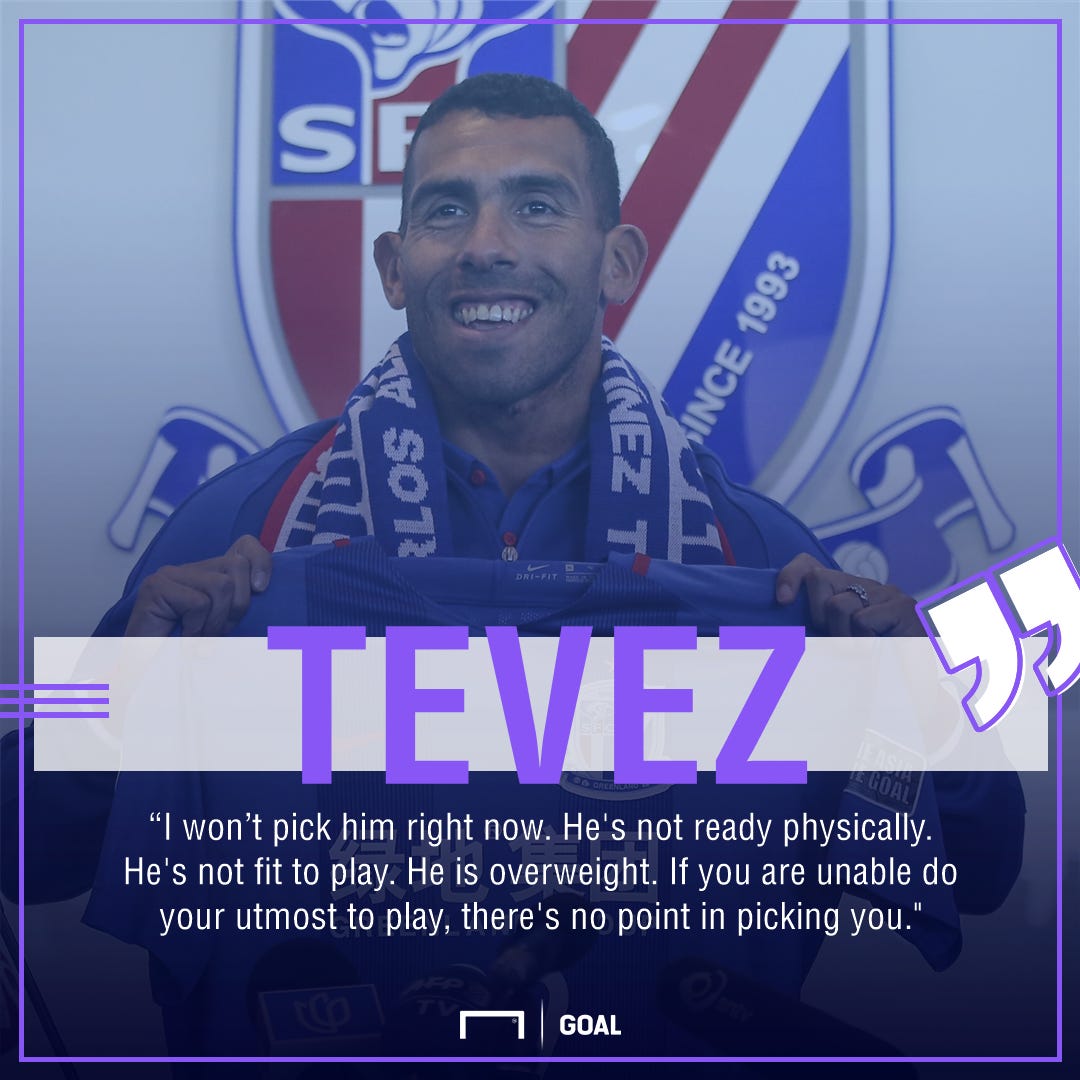 From his first days as a trainee Tevez and his entourage have only been interested in advancing the Tevez brand, with the clubs he plays for coming a distant second in the list of priorities. All Boys were the first to suffer his single-mindedness, the Buenos Aires club essentially bullied into selling the youngster to Boca for a measly US$10,000 after they were threatened with losing him for nothing under child protection laws.

The rap sheet for the striker only grows longer from there. The shady business dealings with Kia Joorabchian that brought he and Javier Mascherano to Corinthians, then West Ham; throwing the affection of Manchester United fans back in their faces to join city rivals City; the refused substitute appearance, the strike and inevitable prolonged holiday back in Argentina. Tevez has barely left a single club without leaving in his wake a whirlwind of broken promises and bills to pay.

At 33, however, this double identity is becoming harder to sustain. Carlitos' Player of the People facade could hold up in his prime in spite of the off-field shenanigans, as the trophies won during his glittering spells in England and Italy can attest. Even at Boca, the club he had supposedly gone back to after years of longing for home in European exile, the subsequent contradiction he left in moving away again, this time to China, was papered over by a string of titles and the millions deposited by Shenhua in the Xeneize bank account.

But on the few occasions Tevez has featured in China he has looked slow, out of touch and, yes, unacceptably overweight. More than that, his image has taken a battering with his frivolous trips to Disneyland and disinterest in giving his all for his employers. By all accounts the Argentine is merely seeing out the rest of the year before going back to the Bombonera, several million dollars richer but having essentially missed a year of a football career that surely has its days numbered.

There might still be a glorious swansong for the player at Boca next year as the club gear up for a tilt at the Libertadores title and a place in the Club World Cup that means so much to every fan. But he will not be the same hero that walked out just over a year ago.

Player of the People? Tevez has proved definitively that he looks out solely for number one, and is prepared to take those willing to place their trust in him for a very expensive ride if it suits him and those closest to him.