After a treble-winning season with her club, Putellas believes the future is bright at international level too, with the Euros and a World Cup coming

Barcelona’s women’s team has made a lot of history this season.

It became the first Spanish side to win the Women’s Champions League in May, beating Chelsea 4-0, and then turned that into a treble-winning campaign, adding the Copa de la Reina after securing the league title just before their European triumph.

Ask Alexia Putellas, their midfield maestro who has starred not only throughout all their recent successes but also long before them, what statement it has made, and she is to the point.

“We have sent a message,” she tells Goal. “Barcelona and Spanish players are among the best in the world, and we have proven it.”

Women’s football has been on the rise in Spain for several years now. There are still steps that need to be taken, with Putellas’ team-mate Caroline Graham Hansen highlighting as much with regards to the league in a recent interview with Goal.

But Barca’s European title was the latest show of progress, with domestic attendance records being smashed and the performance of the national team also showing signs of growth.

Spain qualified for their first World Cup in 2015, and gave the U.S. women’s national team a serious scare four years later, losing just 2-1 in the last 16 to the eventual world champions, who needed two penalties to seal the result.

Their runners-up finish at the 2020 SheBelieves Cup – a tournament in which Putellas was named Most Valuable Player - showed again that they could compete with the best.

The core of that team is the core of this incredible Barcelona side. During this week’s international break, Spain beat Belgium and Denmark - runners-up at the 2017 Euros - by 3-0 scorelines. In both games, every goal was both scored and assisted by a Barca player, as Putellas continued her own Ballon d'Or worthy campaign with two assists and a goal.

“There’s so much hope and pride for what Barcelona has done, where our league goes and our Spanish players,” Putellas says. “With the national team, we should not set limits. There’s still a year left until the European Championship and we have a lot of hope.

“It’s clear that if we keep this level up, we will be near tasting success.”

When Spain dominated the men’s game between 2008 and 2012, winning two European titles and the World Cup, the core of that team came from Pep Guardiola’s Barcelona team, widely regarded as one of the greatest of all time.

And Spain will hope they can tap into that success on the women’s side now.

“There isn’t a lot of differences, but there are nuances that change,” Putellas says, asked how different the playing style is between the two environments. “The important thing is that in the two teams I’m okay and I enjoy it.

“At last, we started to enter in the important tournaments lately and, to a certain extent, we could take away the inferiority complex. I think that the mindset is that, to take advantage of every daily opportunity to improve and rise to the challenge of the tournament. [We must] keep doing what we have done until now.” 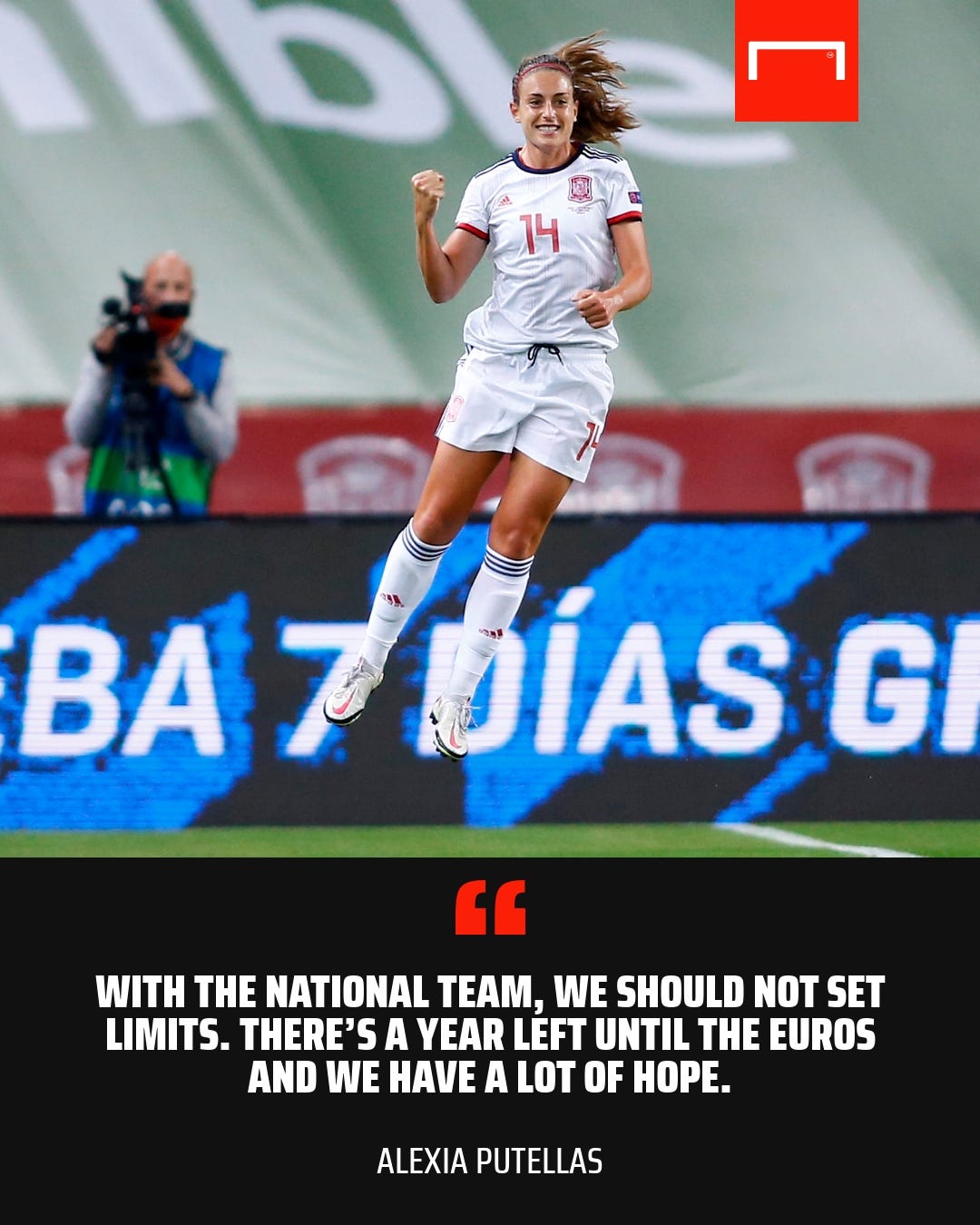 It is not just on the pitch that Putellas is part of big change in the game, but off it too.

Along with a cast of top players from around Europe, the midfielder is a member of Team Visa, the company committing to sponsoring women’s football on the continent until 2025, while also being a lead sponsor for this summer’s Olympic Games, next summer’s Euros and the 2023 World Cup.

“I’m proud to be part of the team for all they do for our sport,” Putellas says. “We share the same values and they were the first to bet on women’s football. That gave them credibility.”

Graham Hansen is also part of Team Visa, and Putellas says that the two club-mates talk about their roles a lot – “we like to share our experiences” – and that she hopes to sit down with the rest of the players at some point in the near future to discuss how they could work together.

For now, her focus is on continuing to take steps forward with Spain and Barcelona. Next summer, La Roja will travel to England for the Euros as a serious dark horse. With front-running nations like England and the Netherlands having new managers in charge, the battle for the trophy will be more open than ever.

Asked if Spain have any specific aims for the tournament, or for the World Cup the following year, Putellas is once again short but sure in her answer.

“Compete and having a winning mindset,” she says. “Then, the results will come.”